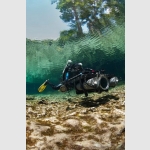 Change email or password
Edit Biography
Becky has always been attracted to water, but her curiosity about what lay beneath the waves became an obsession from a young age. She always knew documenting the underwater world is what she wanted to do. Becky is a professional underwater videographer, photographer, 3D cameraman, and technical diver. She is an Emmy Award winning Photojournalist that has worked for major news networks including CBS and Fox News, shooting video in all types of situations from major hurricanes to the Presidential Election. She has over 17 years of dive experience logging thousands of hours underwater in various conditions and extreme environments to 350feet. Becky first picked up a camera at age 12 to show her family and friends the underwater world. She later became a NAUI Scuba Instructor, and holds certifications in Cave diving, Trimix, Rescue, and several Rebreathers. As a cameraman her projects have taken her all over the globe from documenting historic wrecks in Truk Lagoon, Japan and the Great Lakes, to capturing stunning video of marine life including Great White Sharks, Humpback Whales, and Wild Dolphins. Becky has photographed cave systems worldwide and participated in several exploration projects. For the past 3 years she has worked closely with Woods Hole Oceanographic Institution's Advanced Imaging and Visualization Laboratory using the latest in HD and 3D technology above and below the surface. With them she's participated in many exciting projects with the National Park Service Submerged Resources Center and NOAA. Projects include documenting famous wrecks including the USS Monitor, the U-869 and the 2010 Titanic Expedition. She acquired a client list including National Geographic, The Military channel, Discovery Science, NBC, CBS, FOX and Current TV. Her underwater photography and articles have been published in Advanced Diver Magazine, and National Geographic Traveler, She holds a Bachelors degree from the University of Tampa in Journalism.

What I look for in a Dive Operator:
My two passions in life, diving and photography!