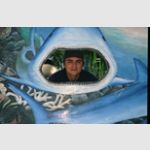 Change email or password
Edit Biography
Scott "Gutsy" Tuason began his romance with the sea when he was still legally too young to dive. Still, this did not prevent him from going with his father on diving trips around the country. Gutsy's photographs were exhibited in several shows sponsored by WWF and he continues to be a WWF contributing photographer. His work has been published in books and magazines notably, Philippine Coral Reefs, a collaborative work with Rafael Cusi, Asian Diver, Action Asia and Philippines Diver magazines. His work may also be seen in Action Asia Adventure Travel Guide to the Philippines. Gutsy is also a director of Concerned Divers of the Philippines; an environmentalist group engaged in marine conservation awareness and environmental rehabilitation projects. Gutsy lives in Makati City with his American bulldog, Butthead.