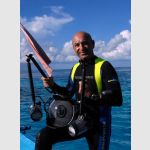 Change email or password
Edit Biography
Giacomo Marchione, was born to Moncalieri 15/02/60. He has developed the studies to Moncalieri for the superior schools near the college Charles Alberto and to Turin for the faculty of Medicine and Surgery, where he graduated in 1988.
In 1990 he entered to work, as Orthopedic, near the hospital S. Cross of Moncalieri, while in 1993 it specialized him in Orthopedics and Traumatologia. Since the juvenile age it pleased him to develop sporting activity, to the 13 year-old age it graduated Piedmontese champion of speed in the eighty meters of light athletics.
In 92 during one of his trips in the tropical countries he took his first underwater brevet for the immersion with cylinders.
Already from the first immersions it felt the need to document the beauty of the submarine world, being impassioned of photo and having already won some photographic contests to theme it devoted him to the underwater photo with good results.