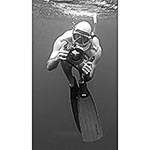 Change email or password
Edit Biography
At the age of ten I got my first cheap ­little point and shoot camera.
A few year later I studied interior design at university in Germany. Photography was one of the minor subjects. Having access to the studio and photo lab during that time, there was the opportunity to experiment with medium format, flash and light. A lot of my time was spent in the darkroom.

I discovered my interest in graphic design and started my own business in 1998 – during the booming era of the new economy.

In 2001 I took on a full time job in a major advertising agency and there was very little time for photography at all. After three and a half years I left my job to travel around Australia.

I found a new home at the North West Cape in Western Australia, with pristine Ningaloo Reef at my doorstep. Having a passion for diving made it quite apparent that I had to capture images underwater as well.

aabz-imaging was founded in May 2007, initiated with a postcard series of 12 different designs. The postcards are a huge success and sell very well. The new series for 2009/10 has a total of 21 designs. Framed artwork is currently on display at several locations in Exmouth/Western Australia.

I am available for contract work in the commercial, industrial or private sectors.

Runner Up
The West Australian Photo Competition "Our Spectacular State" 2008