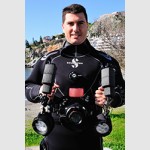 Change email or password
Edit Biography
Esteban Toré began in UW photography in 2007.
Since then he has been learning by himself using internet forums and books.

His passion is to observe and photograph marine behaviours but also loves wide angle.

Esteban mainly dives are in waters of Málaga but also dives in the rest of Spain and other parts of the world. His favorite destination is Indonesia.

In the last years he is competing in some underwater contest. Some of his recent achivements are:

What I look for in a Dive Operator:
Facilities for underwater photographers.