There is no better way to increase the quality of your underwater imaging than by adding artificial light, which will help bring out the brilliant colors of the ocean in your images and video. Traditionally, the powerful pop of light from an underwater strobe has been necessary for still images, and for the majority of photographers, flash remains the best way to illuminate a subject or scene. But video lights, originally designed for underwater filmmakers, have become extremely powerful and more affordable, making it possible to use “always-on” continuous lights for photography as well as video. In general, however, if you’re serious about creating images and films, you’ll need both strobes and video lights to get the best possible results.

If you’re a macro shooter, you don’t need a large, powerful strobe: What you want is a compact strobe specially designed for shooting macro. Backscatter’s Mini Flash (MF-2) builds on the runaway popularity of the MF-1 with impressive new features: a modeling light with twice the power (1,000 lumens), automatic TTL exposure for Olympus cameras, high-speed sync (HSS) for even darker backgrounds, and the ability to use a second strobe to trigger the MF-2 remotely—and even adjust its power—for creative off-camera shots. In addition, the MF-2 uses a bigger battery that actually increases runtime and number of flashes. To top it all off, there’s no change in price! $500 (MF-2 and OS-1 combo) | www.backscatter.com | $400 (MF-2) | www.backscatter.com | $150 (OS-1) | www.backscatter.com 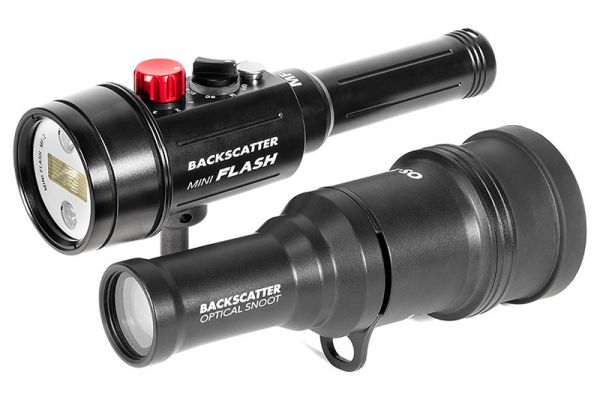 The YS-D2 was one of the most popular underwater strobes around, so when Sea&Sea finally discontinued it and revealed the YS-D3 Lightning, and then the YS-D3 Mark II Lightning, there was plenty to live up to. The flagship strobe, which can be triggered optically or electrically, has a newly developed aspherical troidal lens (for even light dispersion without hotspots), a slightly increased guide number (up from 32 to 33), improved recycle times, and a new target light with a four-fold increase in brightness. The Mark II has better compatibility with old Sea&Sea and third-party TTL converters. Sea&Sea also produces two entry-level models that are fiber-optic only: the YS-03 Solis, which only offers TTL flash exposure, and the YS-01 Solis, which features Sea&Sea’s DS-TTL II system and also gives photographers manual control over the strobe’s output—in 10 increments. $900 (YS-D3 Mark II Lightning) | www.seaandsea.jp | www.backscatter.com | $490 (YS-01 Solis) | www.seaandsea.jp | www.backscatter.com | $380 (YS-03 Solis) | www.seaandsea.jp | www.backscatter.com

Back in 2017, Inon finally retired their stalwart strobe much loved by underwater photographers, the Z-240, and replaced it with the Z-330, which upped the power output, improved the control knobs, increased the beam angle to 110° underwater, and souped-up the focus light. A year later, the D-2000 midrange strobe passed the torch to the D-200, which had a similar design to the Z-330 but offered a guide number of 20 (hence the name). Now Inon has introduced tweaked versions of each strobe featuring a new “fly-eye” inner surface on the dome lens that is designed to produce exceptionally even light distribution—without reducing power or beam angle. The Z-330 can be triggered both electrically (via Nikonos 5-pin connector) as well as optically via slave sensor, while the the D-200 is only equipped with the slave sensor for optical triggering. $650 (Z-330 Type 2) | www.inon.jp | www.backscatter.com | $500 (D-200 Type 2) | www.inon.jp | | www.backscatter.com

The latest versions of Retra’s stylish strobes, the Flash Prime X and Flash PRO X are instantly recognizable for their sleek aluminum enclosures and circular flash tubes. Differing principally in terms of power, the 100Ws Flash Prime X and the 150Ws Flash PRO X improve on their predecessors’ weight (the housing is now 8% lighter), robustness (mode and power dials have been reinforced), recycle time (up to 25% faster), and number of flashes per charge (up to 20% more). The coolest feature? The strobe connects via Bluetooth to your smartphone or tablet, so you check the unit’s status and set advanced features like high-speed sync (HSS). $1,200 (Prime X) | www.retra-uwt.com | www.backscatter.com | $1,330 (PRO X) | www.retra-uwt.com | www.backscatter.com 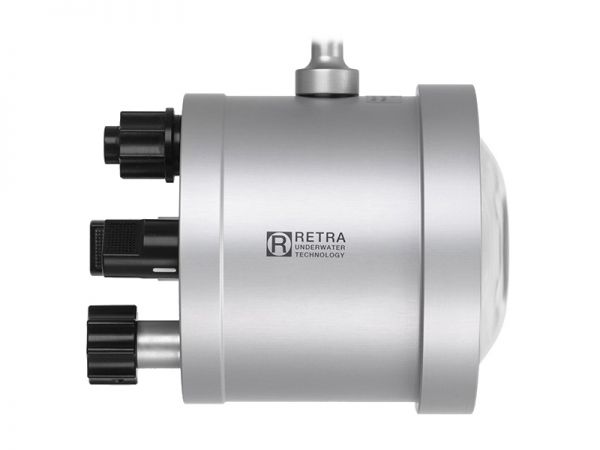 For shooters with deep pockets, and a weakness for bulletproof silver metal construction, there’s Seacam’s Seaflash. The high-end 160Digital packs 160Ws and even coverage at a beam angle of 130° and a color temperature of 4500K. You have the option of both electrical or fiber-optic connection and the strobe works in TTL, manual and slave modes. It’s also one of the few strobes with high-speed synchronization capabilities—up to 1/8000s. And true to its “Digital” moniker, you can even program the strobe via a USB connection to your computer. If you want something a little more affordable, the Seaflash 60Digital gives you 60Ws of output, electrical and fiber-optic connections, and TTL or manual modes. There are both Canon e-TTL and Nikon i-TTL versions available. $2,300 (Seaflash 160Digital) | www.seacam.com | www.backscatter.com | $1,550 (Seaflash 60Digital for Canon) | www.backscatter.com | $1,550 (Seaflash 60Digital for Nikon) | www.backscatter.com

AOI are mostly known for producing wet lenses, and the occasional housing, so it took everyone by surprise when they joined the select club of underwater strobe makers with their Q1 flash. The “Ultra Compact” strobe is a no-frills affair with just one knob and a couple of buttons, and offers manual control of flash power only (which is, of course, what many underwater shooters want) and a beam angle of 85°. The Q1 also boasts a built-in 700-lumen continuous light with three power settings—and a very modest price tag. $300 | www.aoi-uw.com | www.backscatter.com 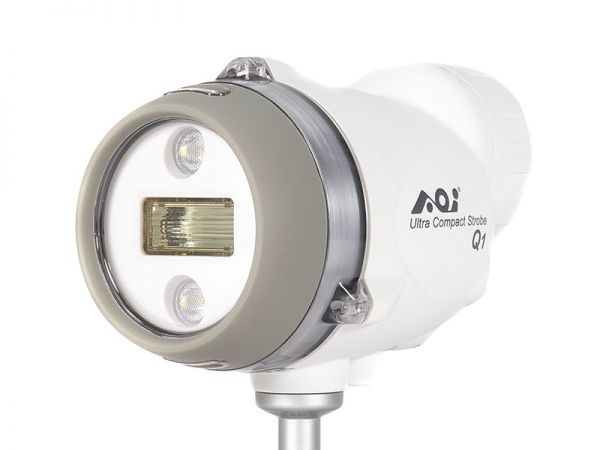 Proving that they are serious about their commitment to underwater photographers, Olympus produces a rather capable little flash (with a respectable guide number of 22) that pairs very nicely with its underwater housings via fiber-optic connections. The strobe offers TTL, manual and slave modes; handily runs off four AA batteries; and ships with a dedicated diffuser. $500 | www.getolympus.com | www.backscatter.com 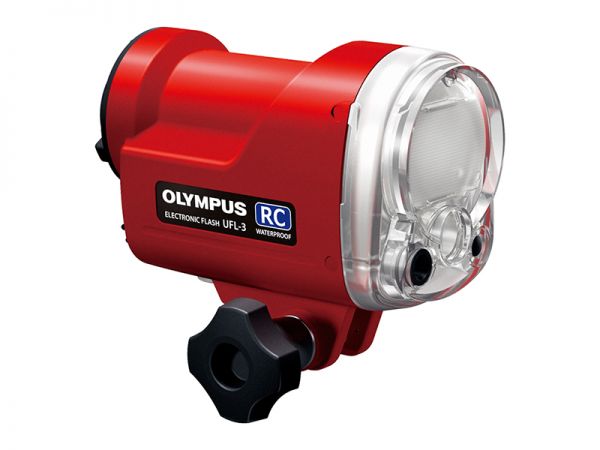 Italian company ONEUW became a member of the strobe club with the release of the high-end ONE160x. Boasting a circular flash tube with a maximum output of 157Ws (hence the “160” in the name, with a little rounding up applied), the strobe can be triggered via an electrical connection or fiber-optic cable. Nikon or Canon versions are available for i-TTL or E-TTL, respectively. $1,800 | www.oneuw.com | (for Nikon cameras) | www.backscatter.com | (for Canon cameras) | www.backscatter.com 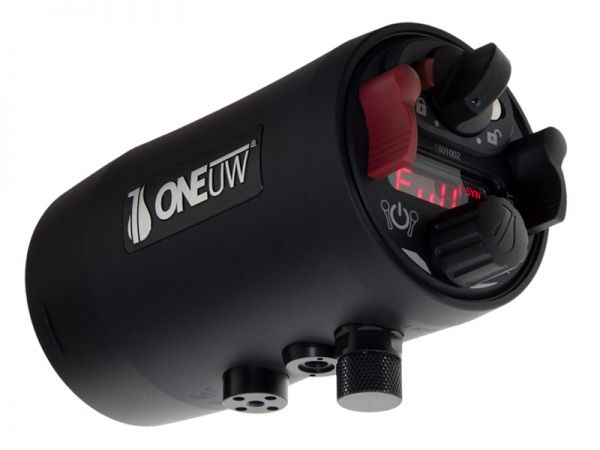 I-Divesite’s Symbiosis light systems make perfect sense for the modern underwater photographer by providing both strobe light for stills and constant light for videography. The latest edition—the SS-2—comes with video light power up to 2,000 lumens as standard, but can be upgraded to 4,000 lumens. Our reviewer, Sascha Janson, dabbles in both stills and video, and appreciated the system’s versatility: “The Symbiosis really came into its own with the convenience of switching easily between shooting stills and capturing footage.” $800 | www.itorch.ca 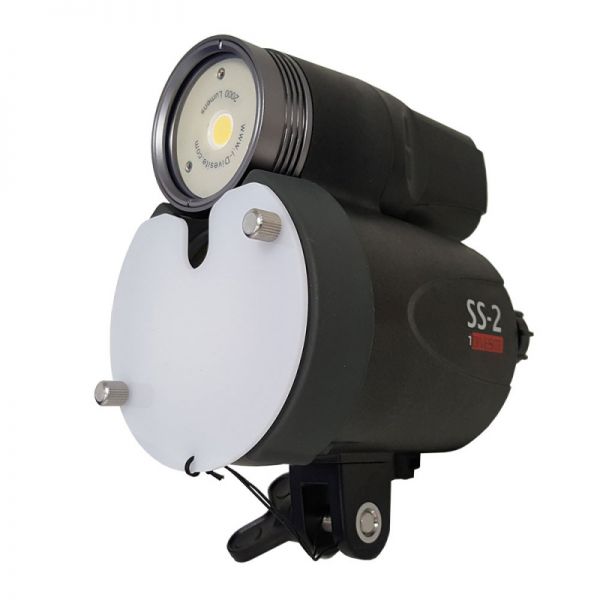 Backscatter shook up the strobe market when they introduced their Mini Flash and Optical Snoot, an ultra-compact strobe and snoot combo that allowed photographers to shoot the small stuff in creative new ways. The company aimed to perform a similar trick for filmmakers by creating a video light that is compatible with the same snoot. The Macro Wide 4300 packs a powerful 4,300-lumen 85° wide beam and a 1,400-lumen spot beam, allowing you to take on a wide range of subjects of (almost) any size. Want to get really creative? It’s also compatible with the company’s very cool Color Filter System. $500 (light only) | www.backscatter.com | $600 (light and Optical Snoot) | www.backscatter.com | $700 (light, Optical Snoot, and Color Filter System) | www.backscatter.com 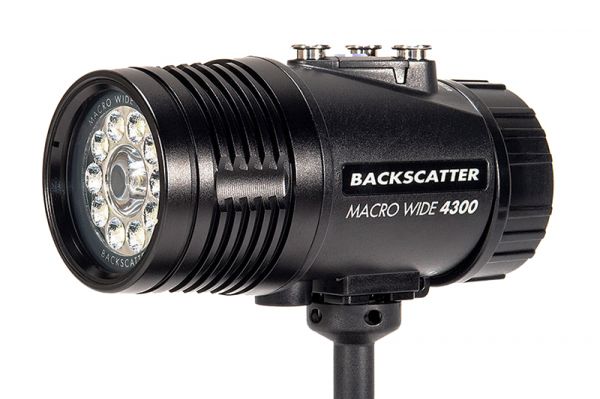 SeaLife’s easy-to-use Micro 3.0 and ReefMaster RM-4K are all about making underwater photo and video simple and fun, and that philosophy extends to their lighting solutions: Whether you’re capturing stills or footage, “always-on” LED lights mean you can see exactly what you’re going to get. Among the company’s extensive range of Sea Dragon continuous lights are four principal photo/video models: the top-tier 3,000-lumen 3000SF Pro Dual Beam (flood, spot and red beams) and the 3000F Auto (flood and red beams), the more basic 2500F and 2000F (flood beam only), offering 2,500 and 2,000 lumens, respectively. Each model comes bundled with SeaLife’s Flex-Connect tray and grip, but the light head can also be purchased alone. $550 (3000SF Pro Dual Beam) | $500 (3000F Auto) | $450 (2500F) | $300 (2000F) | www.sealife-cameras.com

Top ↑
When purchasing underwater imaging equipment like the products mentioned in this guide, please support DPG by supporting our retail partner—Backscatter.com.

Support Our Sponsors
Advertise With Us
Newsletter
Travel with us