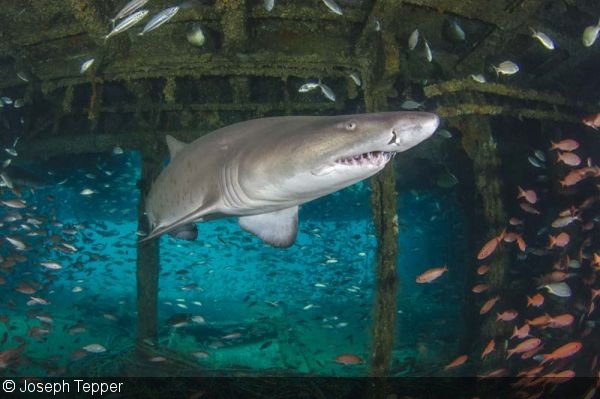 With dozens of diveable wrecks strewn across the sea floor off North Carolina’s Outer Banks, this swath of ocean has earned a reputation as the “Graveyard of the Atlantic.” There are wooden skeletons of 17th-century pirate vessels like Blackbeard’s notorious Queen Anne’s Revenge. Remains of ironclad ships from the Civil War have a final resting place. Decomposing steel hulls of WWII supply ships—the result of patrolling U-boats—rot away within sight of the Cape Lookout lighthouse.

Despite the area’s morbid moniker, however, the wrecks of North Carolina abound with life. Crooked-toothed sand tiger sharks congregate in clusters, swarmed by bait fish in bunches that often blot out the sun. Brought in by the powerful Gulf Stream, vibrant tropical species of fish are plentiful, and lucky photographers will even come home with images of manta rays and dolphins.

This is no boneyard. It’s a nursery for one of the healthiest costal marine environments in the world. And it’s right in the backyard waters of North American underwater photographers.

Every summer, sand tiger sharks gather en masse off the Carolina coast, using the plethora of life attracted to wrecks like the Caribsea to feed and mate

Lingering bursts of a mid-July North Carolina thunderstorm light up the pre-dawn sky as Captain Mike Gerken pilots the Midnight Express out of Beaufort Inlet. Looking back, I can still see the full moon shining down on a larger-than-life statue of Poseidon—a fitting beacon marking the place of the Olympus Dive Center.

The muscled Olympian figure and his trident diminish as we plough towards the choppier open ocean. I only hope the God of the Sea is more merciful to us than so many other seafarers that have perished in these waters over the last 300 years.

Our destination is the wreck of the Caribsea, a U.S. merchant ship undone not by the wrath of Poseidon but by the torpedoes of a patrolling German U-boat in 1942. The unarmed vessel never stood a chance, sinking in less than three minutes with 21 sailors still aboard. The damage from the attack and half century of exposure to the ocean have left the wreck scattered in pieces in 80 feet of water. But on this day, the wreck isn’t what I’m itching to photograph. 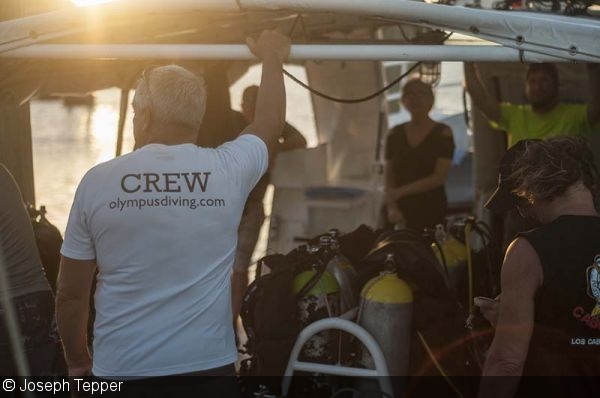 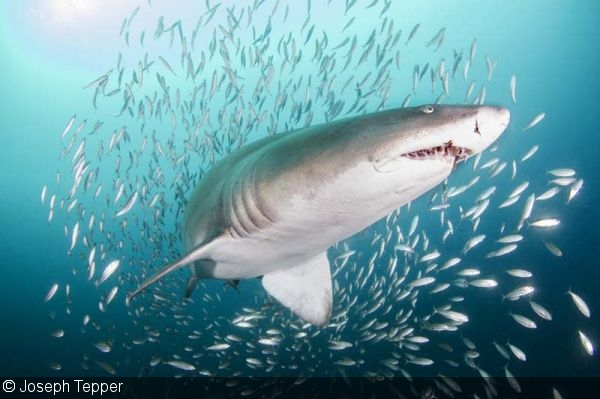 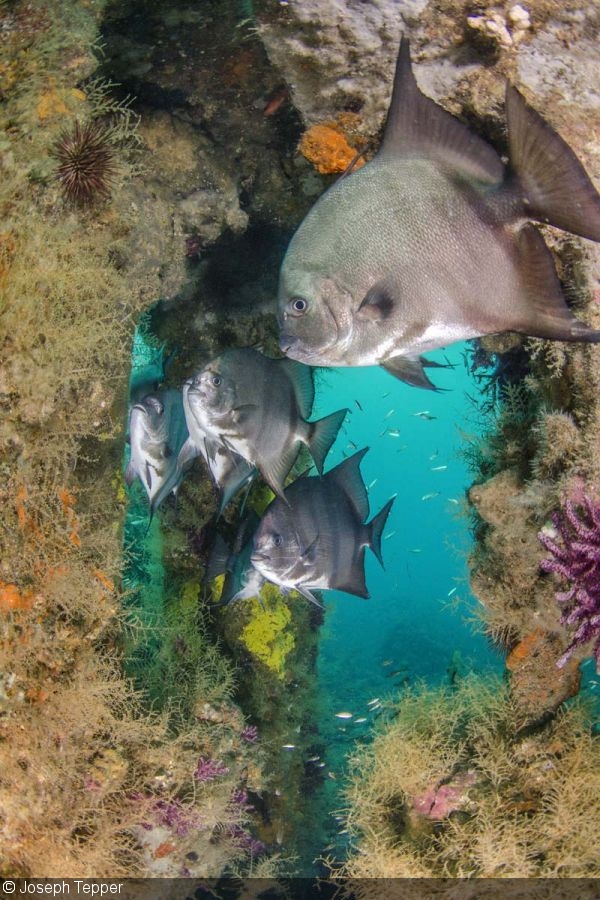 North Carolina diving is more than wrecks: Marine life is drawn to these structures like few other places on the planet

Every summer, sand tiger sharks gather en masse off the Carolina coast, using the plethora of life attracted to wrecks like the Caribsea to feed and mate. It’s not uncommon to see dozens of these sharks hovering mid-water above the wreck.

“Lots of sharks today,” the safety diver transmits from the sea floor up 80 feet through a communications system as we kit up. The crews on both of Olympus Dive Center’s boats—the Midnight Express and Olympus—have North Carolina diving down to an exact science.

Sending down a checkout diver ensures the most accurate briefing in constantly changing conditions. The dual line mooring system makes for easier ascents and descents, especially for photographers with bulky cameras. Photographing wrecks in the open ocean is challenging, but with the Olympus crew, it’s made as easy as possible.

With the report of sharky waters, I don’t loiter on the dive deck too long. Gliding down the descent line, I see no sharks. I see no wreck. All I see is an immense dark shadow. And then I realize I’m about to enter a massive, undulating ball of bait fish. 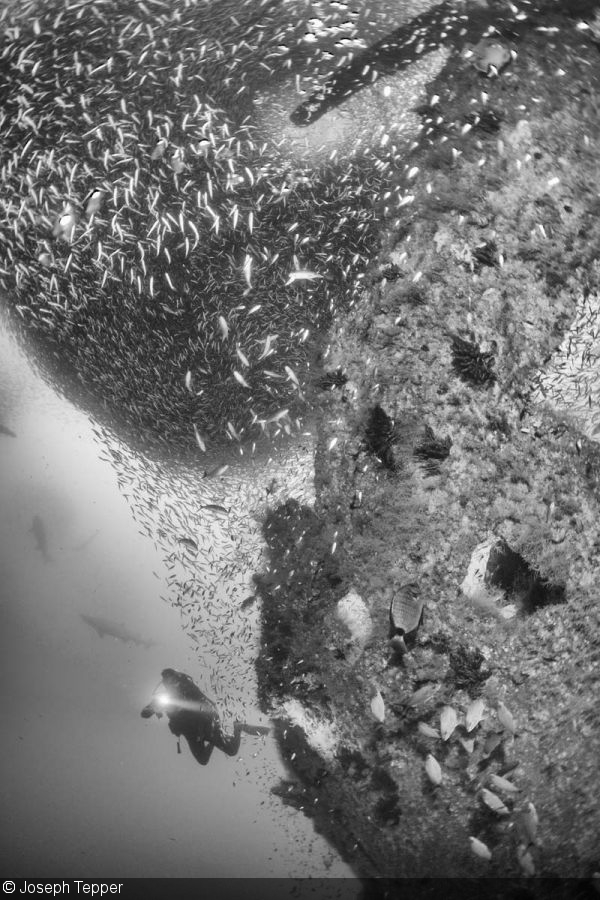 A diver explores the wreck of the Caribsea, while a massive baitball full of sharks looms above

With such a rich marine environment, it’s not uncommon for small orbs of bait fish to group around North Carolina’s sand tigers for protection from predators such as tuna and amberjacks. But today, it seems as if the sharks are the small subjects huddling in and around a singular blob of fish.

The near-zero visibility caused by an overabundance of fish life is surreal. Ten-foot-long sand tiger sharks remain hidden until just a few feet away as they puncture the balloon of bait fish. It is only when an aggressive amberjack zips into the baitball that the fish disperse to reveal the scene in its entirety: More than 50 adult sharks suspended above the historic WWII wreck. 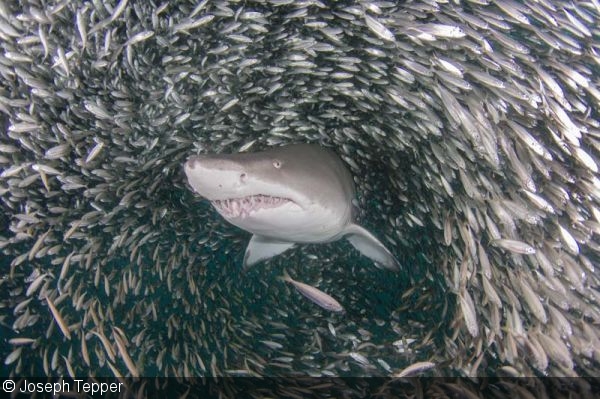 Photographing such a scene has its challenges. Fully engulfed by the baitball, there is no sunlight—only the beam of my focus light. But these fish are extremely reflective, meaning that the scene goes from virtually pitch-black to blinding with the wrong exposure and use of strobes. In these situations, it’s always better to err on the side of lower strobe power.

The key is timing—waiting for that exact moment that the shark emerges from the schooling fish to reveal its gnarled grin. Fortunately, the sand tigers are docile and tolerant of divers, so getting within an arm’s length with my fisheye lens makes it possible to capture the shark as a primary subject with the schooling fish and even the wreck in the background. 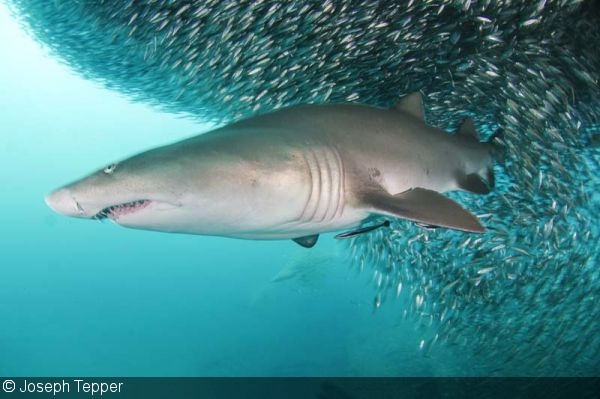 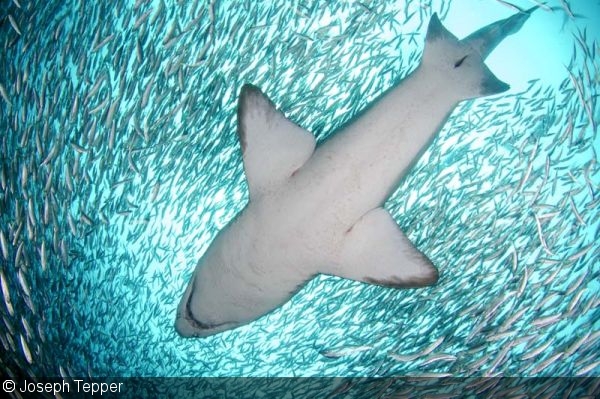 A sand tiger shark passes right above the photographer

The baitball action is so thrilling that we spend two straight days diving the Caribsea. More time on the same site allows photographers to fine-tune compositions, exposures and even try out creative techniques. The use of a slow shutter speed and rear-sync flash creates just enough blur to communicate to the viewer of an image the sense of excitement and action one experiences as a diver.

Even Captain Gerken can’t resist getting in the water with his camera. Splitting his duties between North Carolina and Truk Lagoon, he knows a thing or two about world-class wreck diving. Surfacing from the dive, even this seasoned pro can’t contain his excitement: “Wow!” exclaims Gerken as he hands off his camera. “That’s as good as it gets.” 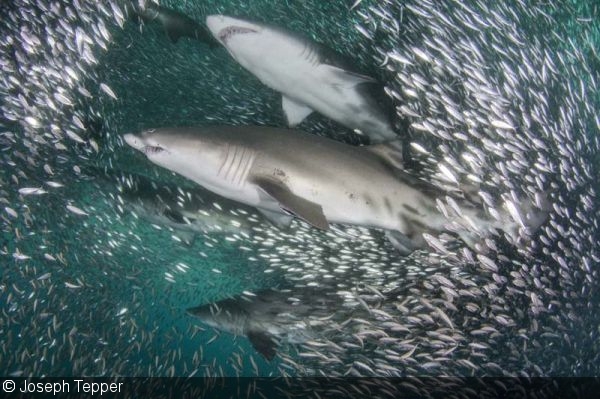 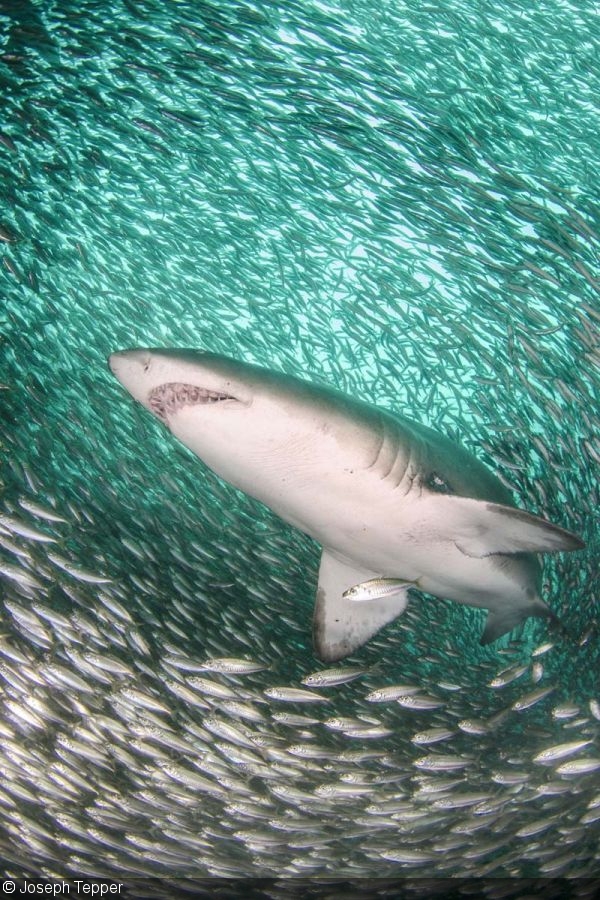 Where did the sun go? Bait fish seem to make the sun and the surface dissapear

Some of the most prized artifacts from North Carolina’s historic wrecks aren’t hidden behind glass at a museum, but rather they are on display for all to see at the Olympus Dive Center shop—free of charge.

It’s the enduring belief by the shop’s founder, George Purifoy, that the history of North Carolina’s wrecks should be enjoyed by non-divers as well. George was part of the team that made a historic discovery while scanning the sea floor in 1975: a wreck of a German U-boat sunk by a coast guard ship in the middle of WWII. The team kept the discovery a secret for several months, hoping to preserve the wreck and its artifacts if possible. 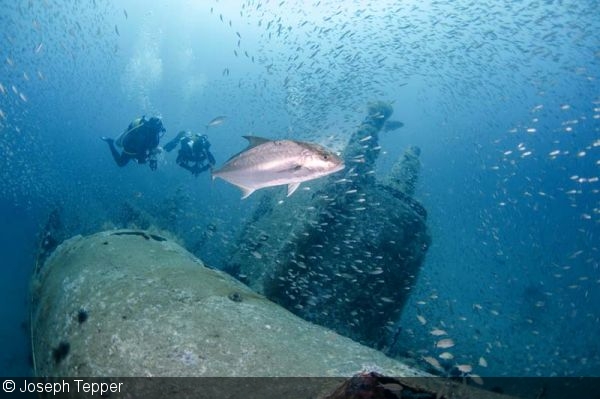 Eventually, word of the U-boat’s final resting place emerged, and George and team set to notifying the surviving crew, even hosting a reunion of the remaining German sailors in 1985. And while George passed away in 2008, his son Robert continues the tradition at the shop of sharing history with the community.

That once clandestine find is now one of the most sought-after recreational dives anywhere in the world. Deteriorated somewhat in the decades since its discovery, the U-boat’s iconic shape is still a humbling subject for underwater photographers—that’s if you can see the wreck through all the fish life. 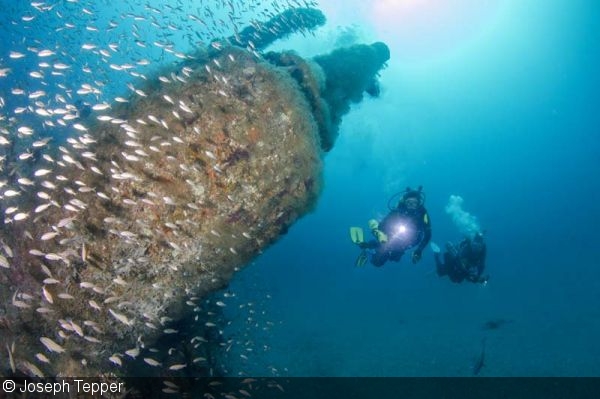 Divers explore the wreck of the U-352, one of the world’s few diveable U-boats

The wreck of the U-352 is at the limits of recreational diving, half buried in 120 feet of water. For this reason, dives are short and there’s limited time to capture images of this historic wreck. On rare occasions, exceptional visibility will allow for images that capture the wreck in its entirety. But with less-than-ideal visibility and a length of 220 feet, the U-352 is perhaps best photographed in sections.

I approached the wreck much like I would a reef scene. First, I identified a prominent foreground feature such as a porthole or communications tower. Then I combined this with background elements such as model divers or schooling fish. Especially lucky photographers can capture images of a rare sand tiger shark cruising by this authentic WWII German U-boat. Talk about having it all. 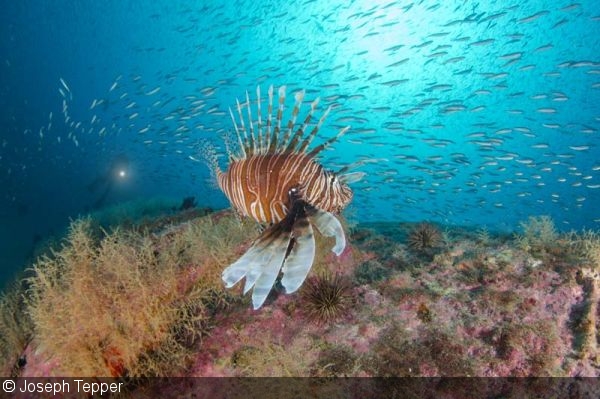 It’s not just about the wreck: Life abounds in, around, and above the U-boat 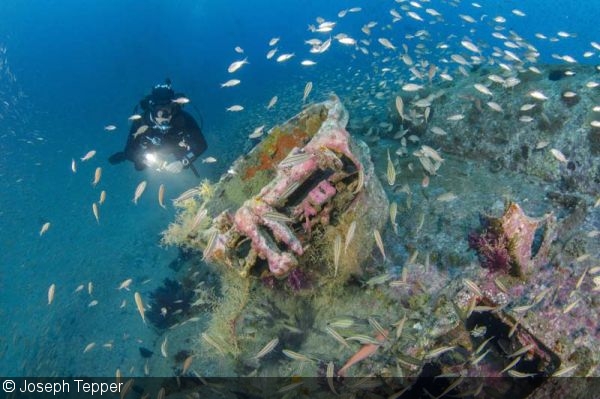 When visibility is limited, you can photograph singular features of this long U-boat, such as this porthole

While the enormous numbers of sharks found on the Caribsea and the historic significance of the U-352 are enough to draw any photographer to pay their respects, the “Graveyard of the Atlantic” has much more to offer.

There’s not much more of an iconic North Carolina underwater photo than a sand tiger shark patrolling inside a wreck—and several sites stand out for this opportunity. You don’t need to get past a bouncer to experience “Club Aeolus.” Nicknamed because of its popularity for sharks to just hang out inside, the Aeolus wreck is one of the few wrecks that is easily penetrable. Inside, juvenile sharks patrol the gangways as if on duty. For a truly special image, try lining up the shot with curious spadefish, various colorful tropical species, and bright shafts of light that cut through holes in the wreckage. 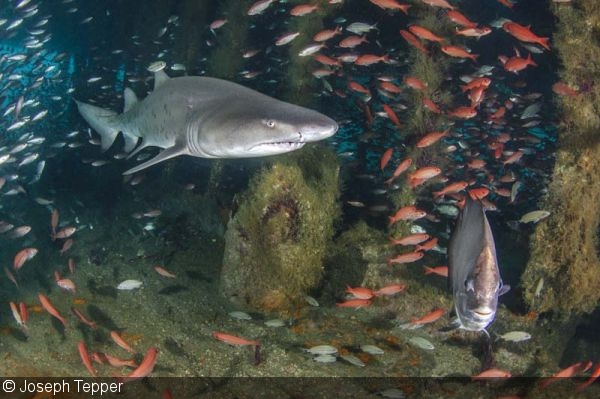 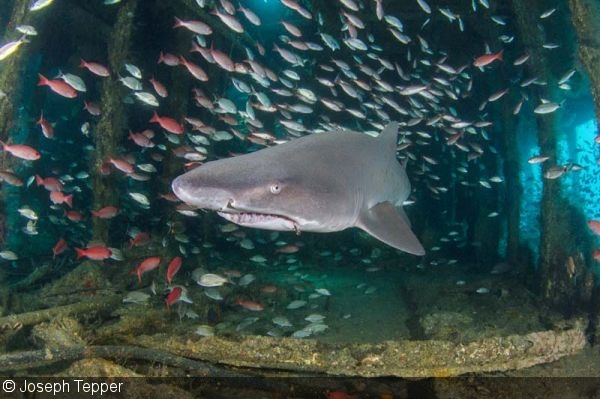 A sand tiger shark patrols the remnants of the Aeolus

While many of the wrecks in the area are dilapidated through war and sea, the Spar is one of the few that remains completely intact. Deliberately sunk in 2004, this coast guard cutter sits upright, making it ideal for images of the bow, propeller and top deck. Like so many other sites, the amount of marine life is just as much an attraction—spadefish, barracuda, and stingrays are all around.

The presence of sand tiger sharks on the wrecks varies during the year and even week to week, so it’s hard to predict where the best spot might be. Wrecks where sharks are most often sighted include the Papoose, the Atlas, and the Schurz. If you want the best images of sharks and wrecks, it’s great to come with a list of desired dives but to also be flexible with the conditions.

Tell another diver that you’ve photographed a German U-boat off the coast of North Carolina and they might not believe you. They might ask, “You’re telling me there are WWII shipwrecks right off the coast?” Try this response: “Yep. Dozens of them. There are also tons of sand tiger sharks, an incredible amount of fish life, and one of the healthiest marine environments. What are you waiting for?” 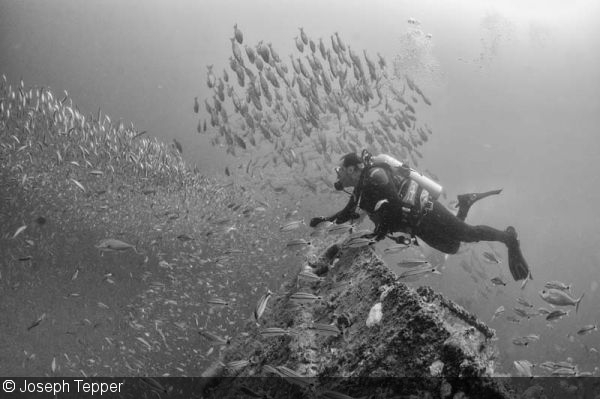 The many wrecks of North Carolina are beacons for marine life, from schooling fish to pelagic life 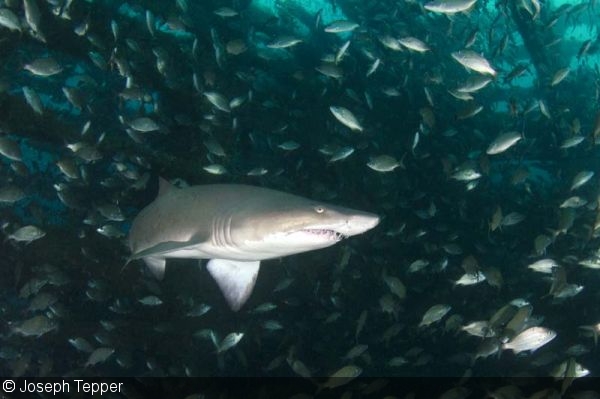 Planning a Trip to North Carolina

When to Go: While diving in North Carolina takes place year round, the most popular time is from May to September. This period often offers the most shark action and warmer water temperatures.

How to Get There: Dive boats leave out of Morehead City, which is a three-hour car drive away from Raleigh-Durham International airport. Renting a car is the best way to travel between the airport and the diving.

Where to Stay: There are many accommodations in Morehead City and at various price points. If you're keen on socializing with other divers and want a quick walk to the dock, the Olympus Dive Lodge is a comfortable, affordable option.

Who to Dive With: Olympus Dive Center has been at the center of North Carolina diving for more than 40 years and specializes in accommodating the needs of technical divers and even the most demanding photographers’ needs. 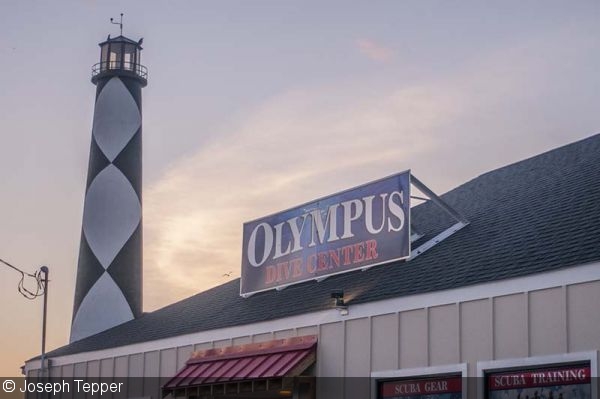 Louis Mulet wrote:
Where is it ?