In this six-part series, underwater shooter Don Silcock tells you everything you need to know about capturing the best of Papua New Guinea, a country he has traveled to two dozen times over the past two decades… 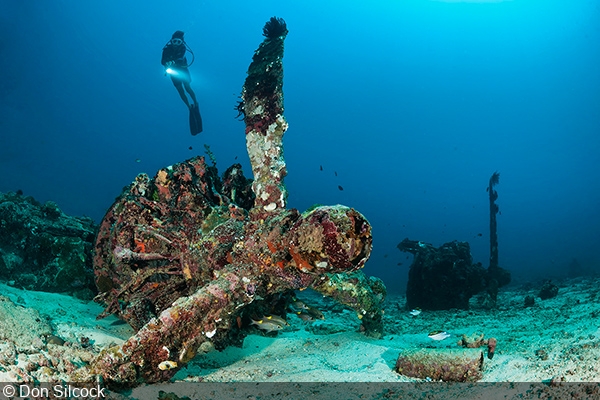 Diver on the Catalina wreck in Kavieng

Located along the edge of the Bismarck Archipelago, the province of New Ireland forms the eastern flank of Papua New Guinea. It is quite remote from the main island of New Guinea and the province has its own distinct and remarkably interesting traditional cultures. It is also renowned for its fabulous Malagan carvings and Tatanua masks, together with its Kulap sculptures, and overall, the province offers an experience that really is quite different to the rest of the country.

The province consists of the large, musket-shaped island of New Ireland, which is also known as Latangai, together with numerous other smaller islands, the largest of which is New Hanover. The diving in New Ireland is centered around Kavieng, the main town and regional capital, and also has its own distinct flavor, compared to the other main locations in Papua New Guinea, like Milne Bay and Kimbe Bay.

On offer is a broad smorgasbord of diving: shipwrecks, WWII aircraft wrecks, dramatic walls, dynamic channels, bustling reefs and schooling pelagics. Above water, Kavieng is a laid-back and friendly place with an interesting colonial and WWII history. 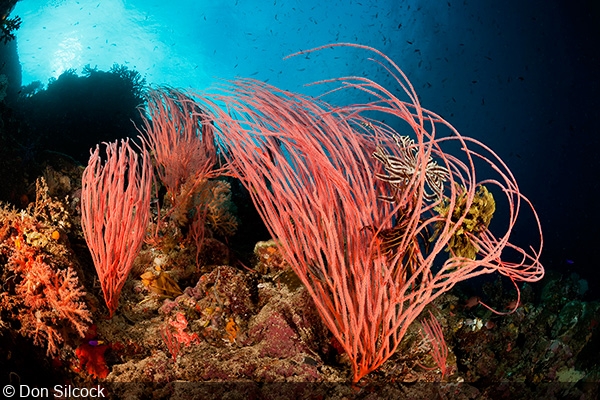 Albatross Passage on the Bismarck Sea side of Kavieng 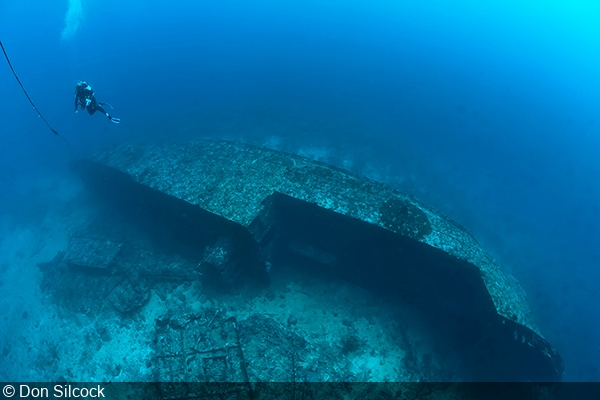 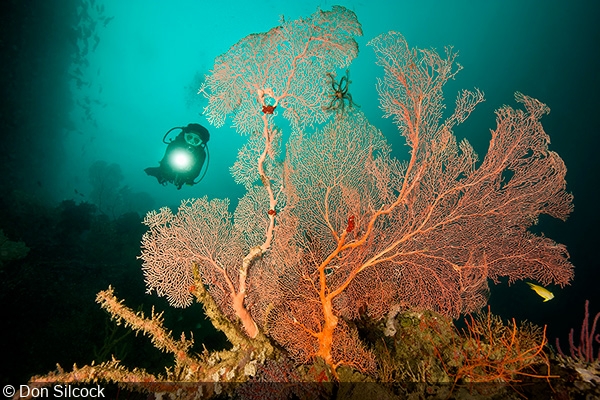 Mention Kavieng among any group of experienced scuba divers and you will quickly discern four key themes: wrecks, big currents, schooling pelagics, and clear blue water. A quick look at the map, combined with a basic awareness of oceanography, will tell you why. Located as it along the eastern rim of the Bismarck Archipelago, the long, thin, rifle-like shape of New Ireland forms a natural barrier between the rich deep waters of the Pacific Ocean to the north and east, and those of the Bismarck Sea to the west. It is also very much an integral part of the Coral Triangle, widely recognized as the area of greatest marine biodiversity in the world.

Because of that physical location, the island’s coastline is exposed to a complex mix of oceanic, equatorial and regional currents. Kavieng’s position means that it sits on the very nexus of those powerful water flows, which circulate back and forth through the channels between New Ireland and nearby New Hanover. Those currents and the sheer biodiversity of the Coral Triangle combine to make Kavieng one of the absolute must-do diving locations in Papua New Guinea—a great combination of wrecks, reefs, coral gardens, big fish and muck diving. 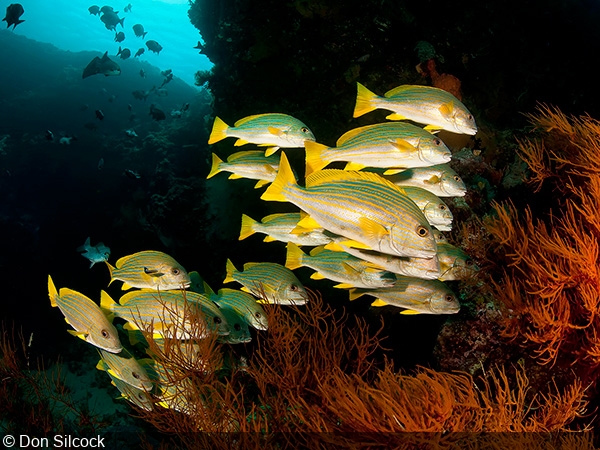 Diving around Kavieng can really be thought of as two distinct, separate areas. The first is on the Pacific Ocean side of New Ireland, in around the actual town. These are principally wreck sites, mainly WWII aircraft, but there is also the wreck of a former Taiwanese fishing boat, Der Yang. The second encompasses the dive sites to the south, on the Bismarck Sea side of the island.

Just to keep life interesting, when one side is at its best, the other is generally not. That is because, as those strong currents flow through the main channels between New Ireland and New Hanover, they flush out the detritus from around the islands and surrounding mangroves. Thus, the clear waters from one side are significantly less so when they emerge on the other side. Add to this complexity the fact that there can be up to six tides per day, and it is easy to understand the need for good local knowledge of the actual dive sites—and, most importantly, when to dive them safely at their best.

When Japanese forces invaded Papua New Guinea in January 1941, they landed first at Kavieng, and soon after at Rabaul, in nearby New Britain. The military base established in Kavieng was much smaller than the one at Rabaul, but strategically it was particularly important, as it was effectively the backdoor of the overall invasion. It was from Kavieng that the Japanese guarded their rear flank as they pushed further into Papua New Guinea.

Thus, when the tide of the war in the Pacific changed in 1943, Kavieng became an important target for the Allies. These days, there is little left to see above water from those offensives, but underwater is a different story. 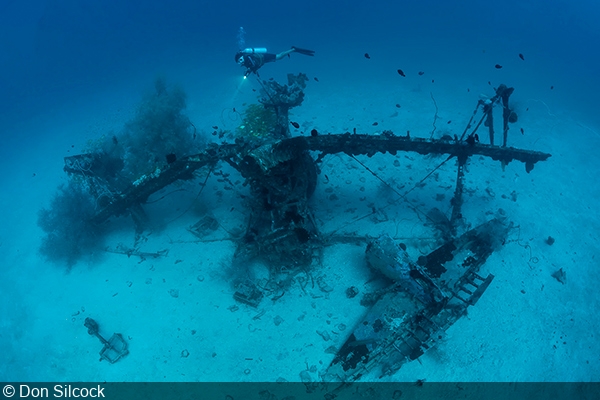 Diver on the “Deep Pete” wreck 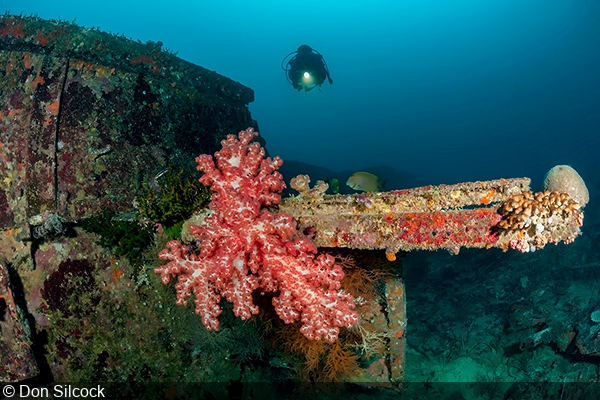 Coral growth on the wreck of Der Yang

In and around Kavieng, there are a total of six WWII aircraft wrecks, ranging from the remnants of one of the RAAF’s illustrious PBY Catalina flying boats to my personal favorite, “Deep Pete”—the wreck of a Japanese Mitsubishi F1M floatplane. To the northwest of Kavieng is the wreck of Der Yang, a longline Taiwanese fishing boat that lays on its side at a depth of 100 feet in the clear blue water. Scuttled in 1988, it is both an excellent dive and a great addition to the aircraft wrecks.

Finally, if you have had your fill of wrecks, there is the Echuca Patch reef near Der Yang as well as the interesting Nusa Blowholes site with its caves, swim-throughs and healthy population of whitetip reef sharks. 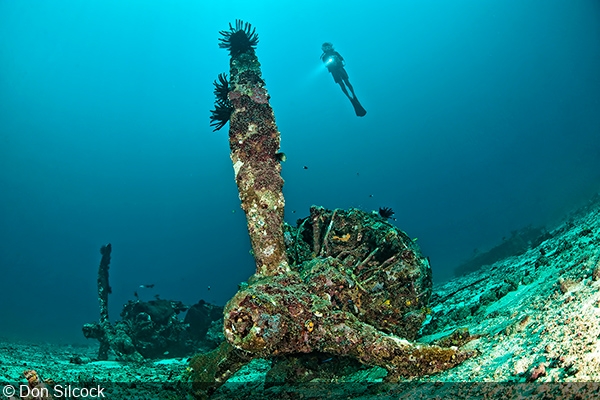 The engines of the Catalina wreck 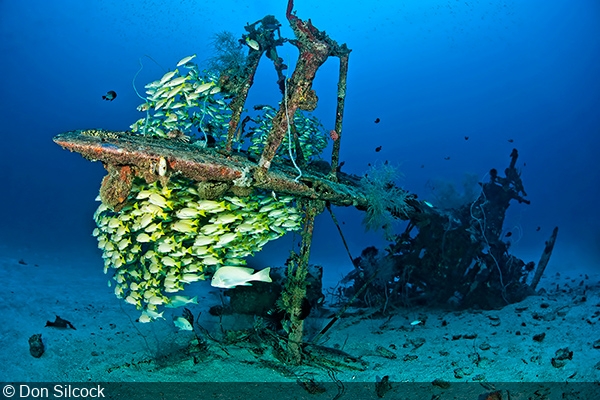 The wreckage of “Deep Pete” provides shelter for schools of fish 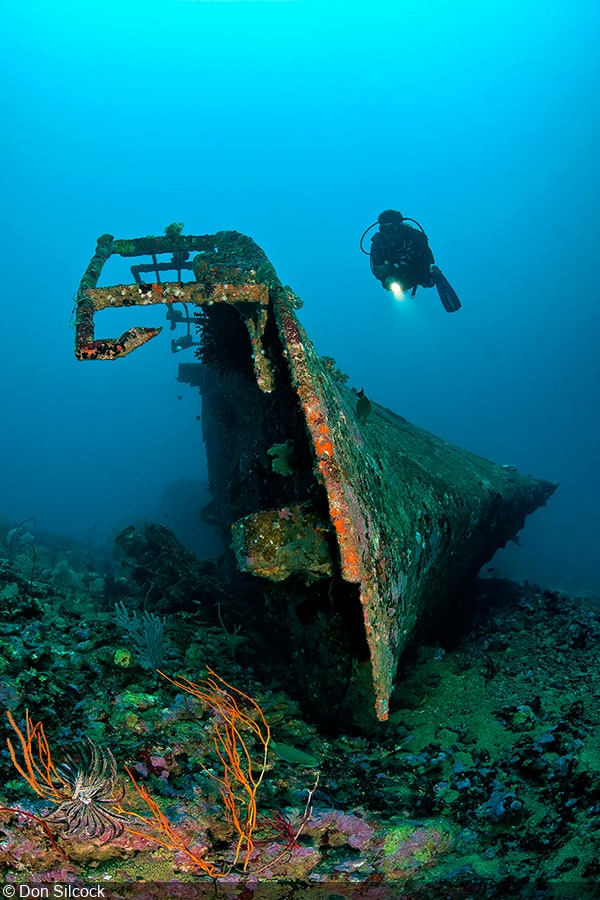 There are numerous excellent sites on the Bismarck Sea side of Kavieng. All share the common characteristic that they are at their absolute best when dived on an incoming tide with the prevailing currents bringing in clear blue waters from the Bismarck Sea.

However, with all those tides, picking the right time to enter the water requires significant local knowledge. Get that timing wrong and you will either end up with the outgoing tide and all the detritus from the islands and mangroves it has swept through—meaning really bad visibility—or you will feel like somebody pressed the spin cycle button on you, because at their peak, the incoming tides seem to reach warp speed!

Timed to perfection would have you in the water as the incoming tide from the Bismarck Sea has flushed away the detritus, but still with enough current to stimulate the marine growth and schooling pelagics. 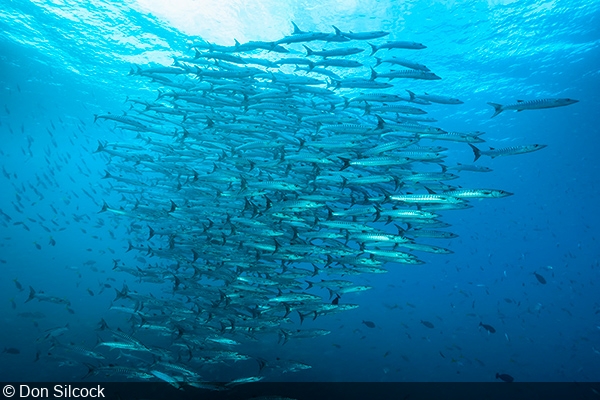 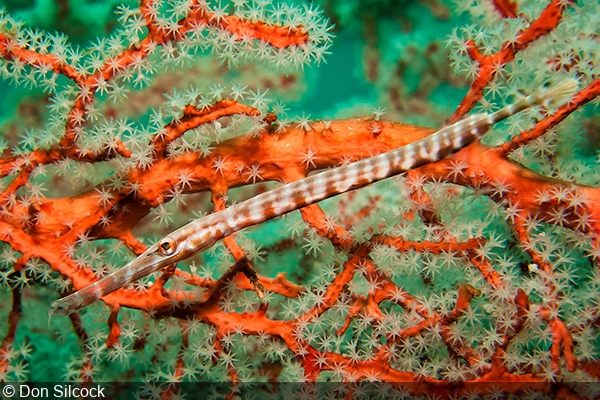 Albatross Passage is also great for the smaller stuff 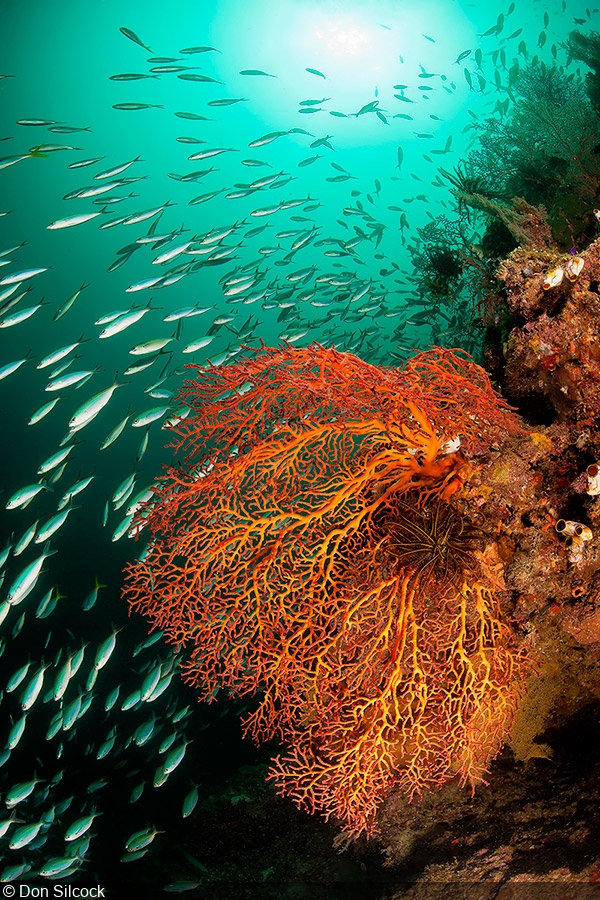 Albatross Passage at its best!

The second-largest island in New Ireland province, New Hanover, is located some 25 miles to the west of Kavieng. It is a volcanic, rugged and very much untamed island. Its traditional name is Lavongai Island and most divers will probably never have heard of it. It is much better known among surfers for its waves and excellent breaks, while anthropologists know it for some of its traditional customs, along with the interesting “Johnson Cult” that the locals used against the former Australian colonial rulers.

On the northwest tip of New Hanover is Three-Island Harbor, the final resting place of four Japanese WWII vessels, all sunk by Allied forces in February 1944. One of these is probably the best diveable and fully intact midget submarine anywhere! 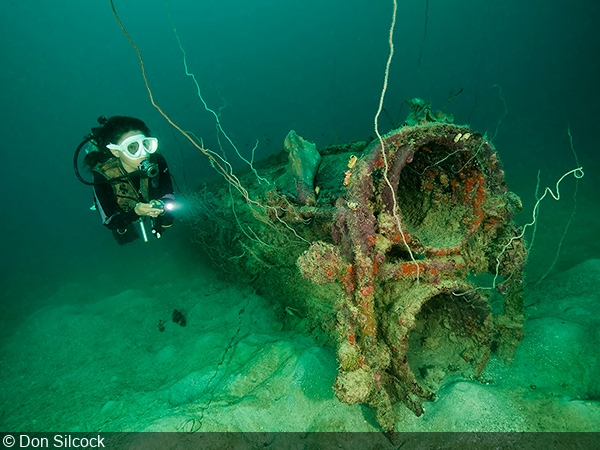 The “business end” of the New Hanover mini-sub 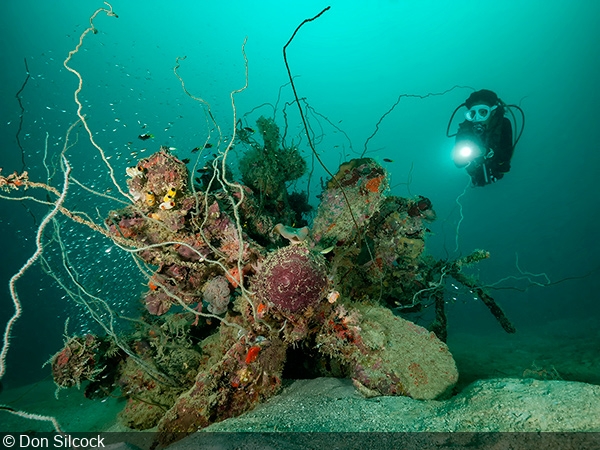 The propeller of the Japanese mini-sub 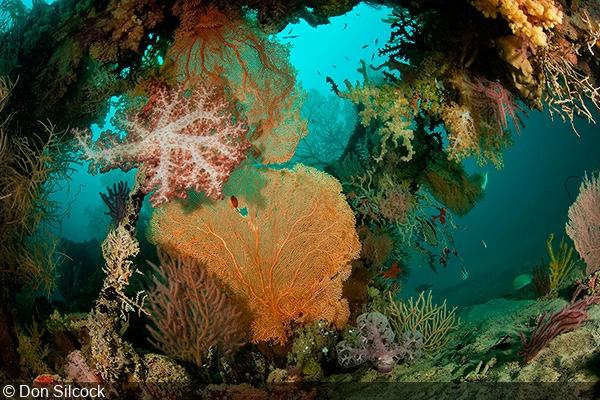 New Ireland’s rather remote location on the eastern rim of the Bismarck Archipelago gives it a distinctively different look and feel to the other main diving locations in Papua New Guinea. In a country with so many interesting cultures, New Ireland stands out for its quite unique wooden carvings and its traditional rituals and ceremonies. Underwater it is also different, with all of its excellent wrecks, reefs, coral gardens and schooling pelagics making for some truly excellent photography opportunities. In a country that has so much to offer the traveling diver, New Ireland is yet another of Papua New Guinea’s truly special places. 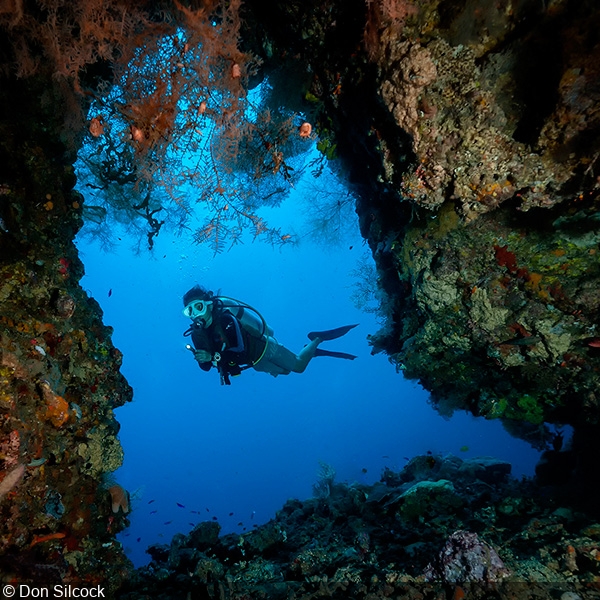 A last glance at Albatross Passage

How to Get There: Port Moresby is the only international gateway into Papua New Guinea and is well served by Air Nuigini and Qantas from Brisbane and Cairns. Kavieng (KVG) is New Ireland’s regional airport and is served by Air Niugini from Port Moresby. Organized carefully, it is possible to leave Brisbane mid-morning, transit through Port Moresby and arrive in Kavieng as the sun starts to set.

When to Go: While conditions do vary, Kavieng is effectively a year-round diving destination. The very best months are May–June and October–November, with good visibility from October through March. Water temperature is warm throughout the year at 82–86°F (28–30°C).

How to Dive Kavieng: There are two land-based options to dive the Kavieng area: Lissenung Island Resort and Scuba Ventures Kavieng. Both are great operators and know the area and its sites very well. All my personal experience of Kavieng has been with Lissenung, which is run by Dietmar Amon and his wife Ange. Between them they run a really good operation that also puts a tremendous amount back into the local community. They also privately fund and run a highly active turtle conservation project from Lissenung Island that involves meticulously moving newly laid eggs to safe havens so they can hatch in safety.

How to Dive New Hanover: Although there is some exceptional diving in New Hanover, it is quite difficult to dive there because of its remote location, lack of a compressor and suitable dive boat. There is accommodation at Clem’s Place on Tunnung Island, which is run by Clem Anton and is primarily focused on and caters to surfers. Lissenung Resort organizes expeditions to New Hanover with all the logistics arranged by them and accommodation at Clem’s Place—it’s a real adventure!

Complete Guides: Read more about this fantastic corner of Papua New Guinea and the superb diving to be had there in Don Silcock’s comprehensive guide to diving New Ireland, including the PBY Catalina wrecks, the “Deep Pete” Mitsubishi F1M wreck, the Der Yang shipwreck, and New Hanover’s Three-Island Harbor. 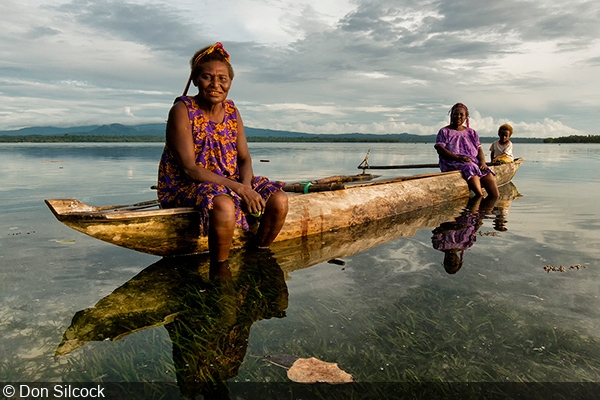