Want an opportunity to get great shots like those in this article? Join us at the Sardine Run this July for a special DPG Expedition. A few spots are still available!

With the crest of each wave we hold our footing to keep the bow steady; and with each trough we inch the dive boat forward off the sand until we are deep enough to hop on board, start the outboard engine, and thrust ourselves over the incoming surf. As we pass the breakers and look back towards the towering cliffs and rolling hills of the wild coast of South Africa, it becomes clear that the this daily ritual would only foreshadow the deserving namesake. 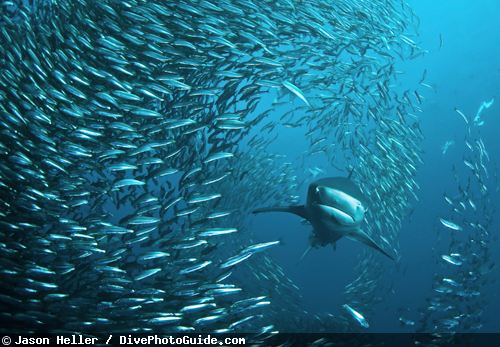 Within several hours the ocean will reveal its ever-wilder side, boiling in explosive predation on an unfathomable scale: a visceral experience that neither words, nor even images are a proper surrogate. In the first five days of the DPG expedition to the Sardine Run,  I would see more dolphins, sharks and whales, than in all of my previous diving years combined. 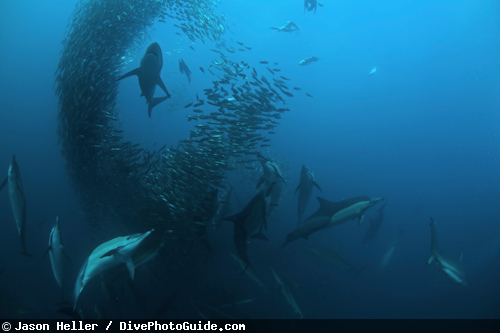 Visible from space, the annual Sardine Run is one of nature’s great wonders and arguably the largest migratory event on earth, rivaling the Serengeti’s wildebeest migration. During the region’s winter months of May through July, hundreds of millions of Sardines aggregate in massive shoals off the east coast of South Africa, and ride the current as it charges up the coast. Scientists can only theorize the environmental stimulus that causes the sardines to “run” in such massive numbers; however they have made a correlation between this annual spectacle and the water temperature of the currents changing direction from the south to the north. 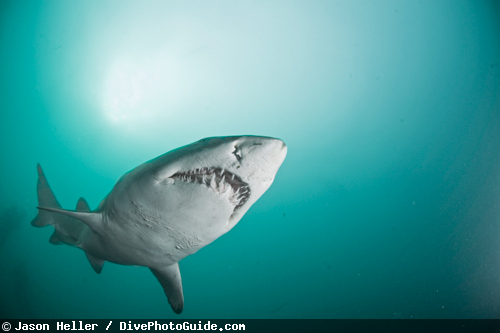 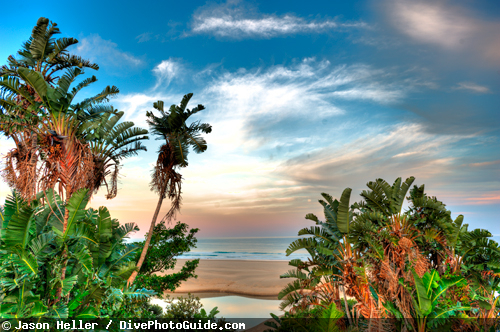 Our DPG expedition is privileged to have one of the pioneers of the Sardine Run, Walter Bernardis, a rugged and sun parched South African with a heart of gold, as our captain and guide. Walter is the kind of guy who, over a decade ago and after contemplating hundreds of sharks in a feeding frenzy in limited visibility, decided to jump in and see what happens; and thus, Sardine Run diving was born. 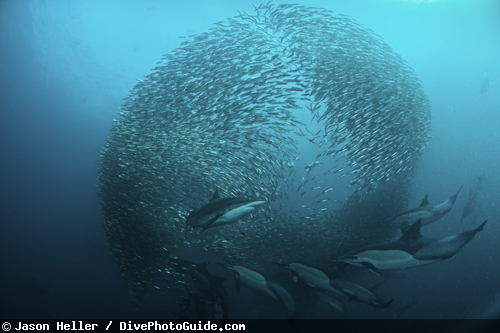 One would think that finding millions of sardines, thousands of dolphins, sharks, and birds and dozens of whales, is a simple task. We soon learn otherwise, as each day began with a formidable search for predatory action. Our small  expedition team of seven, geared up and cameras at the ready, cruised for miles out to sea and up the coastline -escorted by several humpback whales- all in search of swarms of cape gannets dive bombing a concentrated area of otherwise dark and vast open ocean: the tell tale sign of an active bait ball. 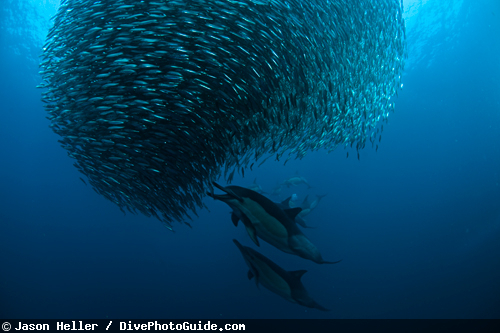 Our second set of eyes comes from a microlight plane, essentially a hang glider with a motor, which patrols the sky above us, narrowing our search by radioing the position of the gannets.  A crescendo of anticipation and excitement would build with every passing pod of dolphins or small flock of gannets resolutely migrating towards the same spot. It was like a scene from a Hitchcock movie. 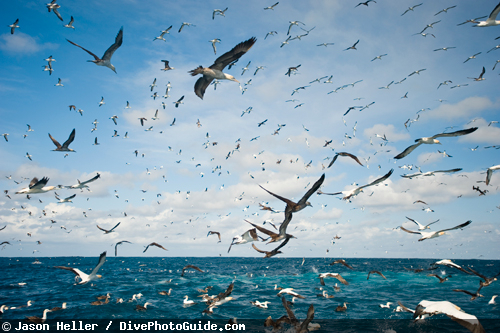 Walter’s last minute briefing was short and sweet: “don’t look like food, don’t act like food. Let’s go diving.” I repeated these same words in my mind over and over as I back-rolled and descended on my first feeding frenzy.

From the moment I submerged my senses went into overdrive. The  sheer amount photography oppurtunites were overwhelming. The omni-directional chirps and clicks of hunting dolphins communicating with each other overlay the experience with a continuous soundtrack, while the carpet bombing cape gannets hit the water from the sky with such force that I can feel the shockwaves resonate in my chest.

Sardine scales in the water column indicate that I am swimming in the right direction; otherwise the featureless void surrounding me could lead me astray. Dolphins speed past from all directions. Dozens of sharks patrol the edge of visibility. The shockwaves get stronger and more frequent. Finally, an immense, amorphous shadow seems to emanate from the abyss. Alas, I was in my first bait ball. 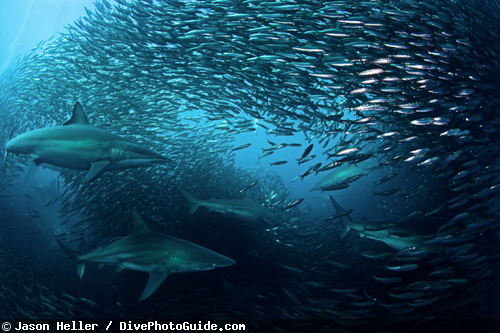 The main shoal starts out of reach deep below the surface. Soon common dolphins, the catalyst for the entire predation event, form small packs. Like wolves of the sea, they orchestrate what can only be described as one of the most deliberately intelligent hunting strategies in the animal kingdom, separating and corralling portions of the shoal to force the fish towards the surface by blowing walls of bubbles under and around them. 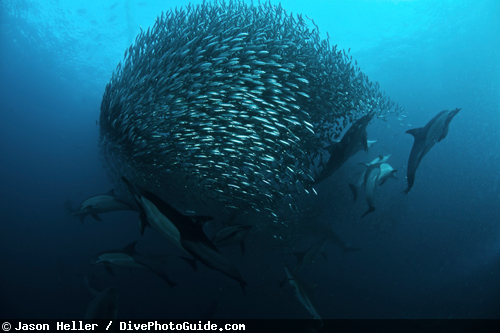 The sardines instinctively form tight balls as a means of protection; hence the term bait ball. Once the sardines are between thirty and sixty feet from the surface, the cape gannets drop from the sky like feathery rain, attacking the bait ball from above. The dolphins, in as calculated a manner as I could have ever imagined, take turns charging the bait ball and feeding from below.  The sardines have nowhere to hide. 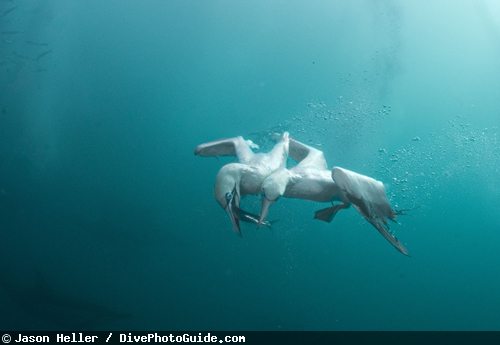 The bait ball undulates in its evasive, almost memorizing, maneuvering. This activity attracts sharks –lots of sharks– seven species to be exact: bronze whalers, oceanic blacktips, duskys, silkys, raggies (sand tigers), zambezies (bull sharks) and the odd tiger shark, which join in the frenzy in their own defined pecking order. This continues relentlessly until the very last sardine is eaten, leaving nothing but scales and fish oil in the water. 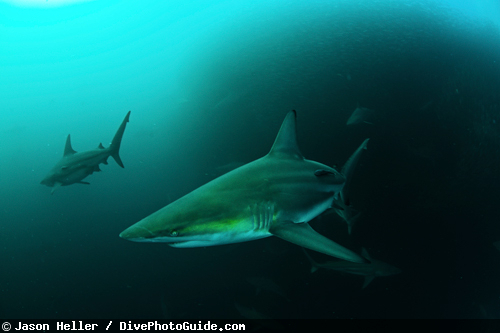 Our adventure is not complete without an encounter with the crown jewel of the Sardine Run: the silent stalker of the Sardine Run, the Bryde’s whale. Amid the chaotic frenzy, these forty-foot long torpedoes would seize the opportune moment when the bait ball is large and dense, and simply pass through, mouths agape, and with each pass consume hundreds, if not thousands of fish. 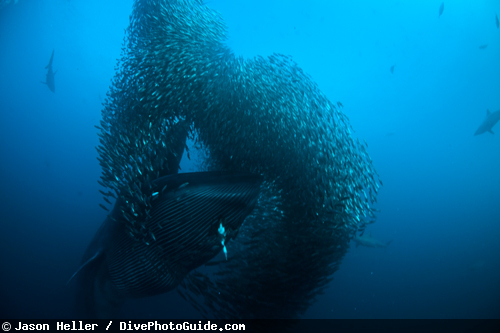 The irony for divers is the stealth in which such a large creature can maneuver; often unnoticed even with a twelve-foot tail fin passing overhead. As if by prescription, our final day brought us a dose of several less stealthy whales, seeking the attention of the underwater paparazzi. We were all too obliged to comply. Ascending with near empty tanks and giddy from the surreal experience, we began the ride back to shore for our complicated beach landing. Walter pauses to time the entry over the waves just right “Hang on tight; I learned this one on Baywatch.” 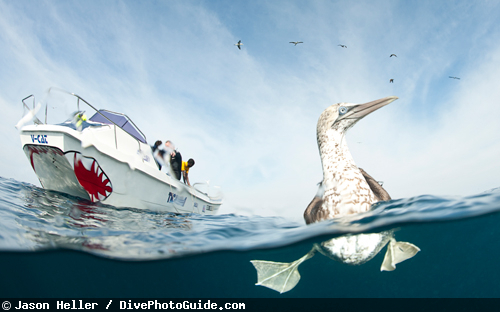 All these photos were taken on a DPG Expedition. Join us at the Sardine Run in July for an oppurtunity to get shots like these!