Each year, great white sharks venture down to the Neptune Islands, a collection of islands located off South Australia, to feed voraciously on the seal pups that are born during the winter months. The best place to access these islands is from Port Lincoln, which is a quick one hour flight from the city of Adelaide, and the best chance you have at seeing them is on a Rodney Fox Expedition.

The aim of the Rodney Fox Shark Expedition is to spot and hopefully photograph great white sharks, but as we all know, wild animals are never predictable. Unfortunately we didn’t see any great white sharks on my trip, but even though sharks were lacking, the trip was still an incredible adventure that provided some brilliant photographic opportunities. Some of the special photo opportunities included sea lions, sea lion pups, dolphins, giant stingrays and bronze whaler sharks. 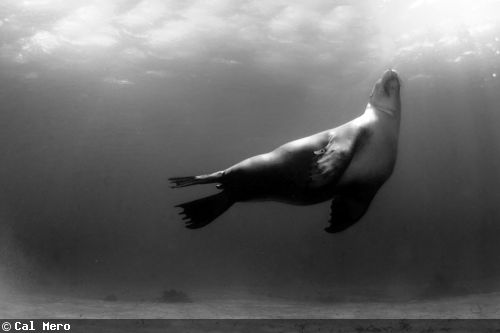 The Rodney Fox Shark Expedition leaves from Port Lincoln on its 3 day journey to the Neptune islands. The trip is hosted by Andrew Fox, son of Legendary shark attack survivor, Rodney Fox. Andrew is a wealth of knowledge on shark biology and behavior and is a passionate underwater photographer. As a result, Andrew not only caters for underwater photographers but also goes out of his way to give us the best possible opportunities to capture those award-winning shots.
The first major photo opportunity I was presented with was Australian sea lions at Hopkins Island.  After Andrew briefed me on the best way to approach sea lions and where to position myself for the best action, I entered the water and was quickly greeted by a young female. She was curious and playful but before long there were 3-4 seals whizzing through the water. From an underwater photographer’s point of view, Hopkins Island is a brilliant place to photograph sea lions.  The substrate varies between smooth white sand and long seagrass beds. This allows you some flexibility in your shots.  I tried to contrast the dark shapes and forms of the sea lions against the white sand bed but I was also able to get some intimate shots of the sea lions nuzzling into the seagrass.

The water clarity is usually very clear (10-15m+) and sometimes exceptional.  There were other non-photographer snorkelers present but the area was large enough that it was easy to escape off by myself for some one-on-one action with the sea lions.

I will always remember one beautiful moment when I found a female sea lion resting on the sea bed. I approached her slowly. I was down low almost flat against the sand as I wanted to capture her sitting upright with the blue ocean behind her. I had a Tokina 10-17mm fisheye zoom lens equipped to my Nikon d80, which was the perfect lens for the sea lions.

The beauty of the 10-17mm is that it let me get incredibly close to the animal while still maintaining the background. I wanted to get as close as possible to maximize the power on my strobes output. I only used one strobe for the seal portrait as I wanted to create a distinction of highlights and shadows on the seals face.

I shot the seals portrait with the strobe positioned firmly out to the side and pointing away from the subject so just the very edge of the flash illuminated the seals face. I used a shutter speed of 1/180th of a second to darken the background and provide contrast with the seal’s illuminated face. I also used such a high shutter speed to capture her if she suddenly took flight. Because of the high shutter speed I had to widen my aperture to F6.7 as I was shooting at ISO 100. The minimal depth of field created by F6.7 is acceptable because of the simple background of the shot. 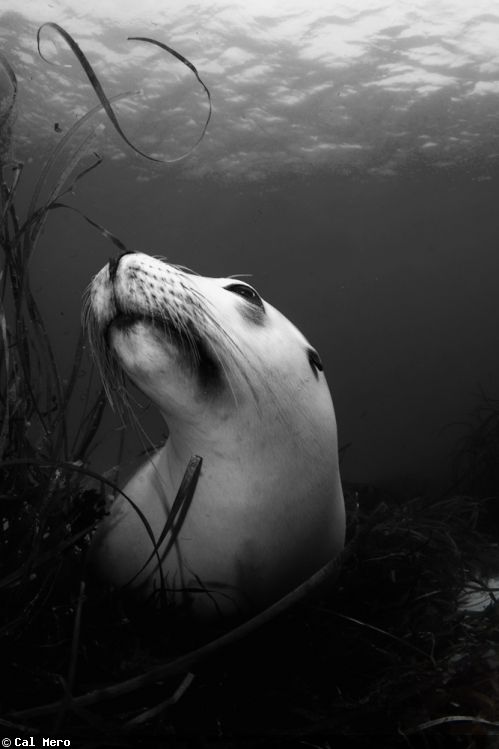 She seemed calm and relaxed. I got right up next to her and took a few close head shots where she saw herself reflected in the dome port. She started nuzzling the dome and I put my hand out and she then started to nuzzle my hand. I felt her whiskers and smooth pelt. Even with a few years of marine biology under my belt, I’ve never felt so connected to a wild animal. 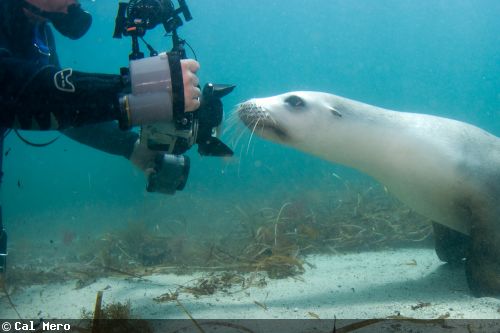 It was just after breakfast on the second day that I heard the promising yell of “SHARK!!!”  I raced out back to find a large bronze whaler viciously chomping on our bait. Everyone was excited as this was the first large shark most people had seen in the wild.  The shark made a few strong passes before deciding it wasn’t interested in the bait and moved off to other, more exciting things.  The buzz on the boat really took off after this shark sighting and everyone was anxious to get into the cages and into the water.  The shark really was an impressive sight as it savaged the bait and threw its tail from side to side which churned the water into a white froth.

Soon after, Andrew declared that we were taking the cage down to the bottom. Rodney Fox Shark Expeditions is the only shark diving operator in the world to lower its cages to the seafloor. We lowered the cage down to a depth of 25m. We had burley in a container in the cage and were able to cut pieces off to attract fish and giant stingrays that swam over and around the cage. Watch out for your fingers tho as the fish are feisty! The bottom cage diving was exhilarating as we were quickly surrounded by a huge school of fish that included trevally, leatherjackets, eastern blue groupers and even giant string rays. 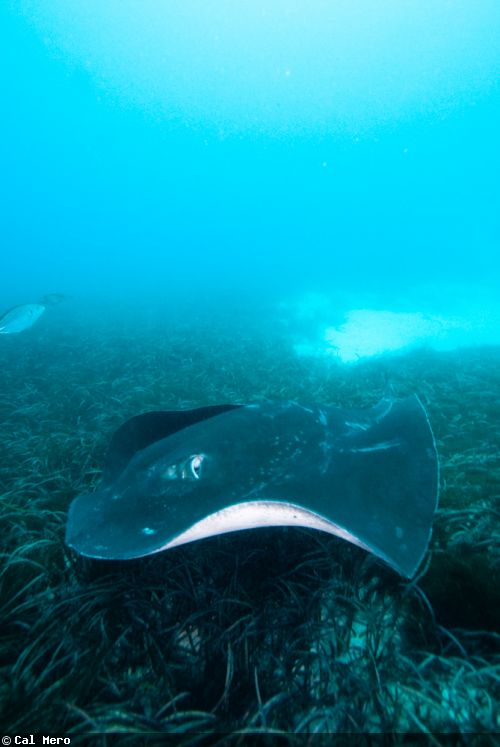 Once again, Andrew Fox goes out of his way to ensure you get that ‘wow’ shot so he positioned me near the door of the cage and showed me how to operate it so that I had the best place to shoot from. Shooting from a cage was fun and challenging.  I was mostly shooting up into the sun to contrast the schools of fish against the sun ball. Firstly, I set the ISO to 400. I wanted it high to allow me to freeze fast moving fish whilst maintain color in the background. I set my camera to shutter speed priority as the action was coming thick and fast and didn’t want to ruin exposures by incorrect aperture control. I varied the shutter speed between 1/125th and 1/250th to darken the background and emphasize the fish’s colors. 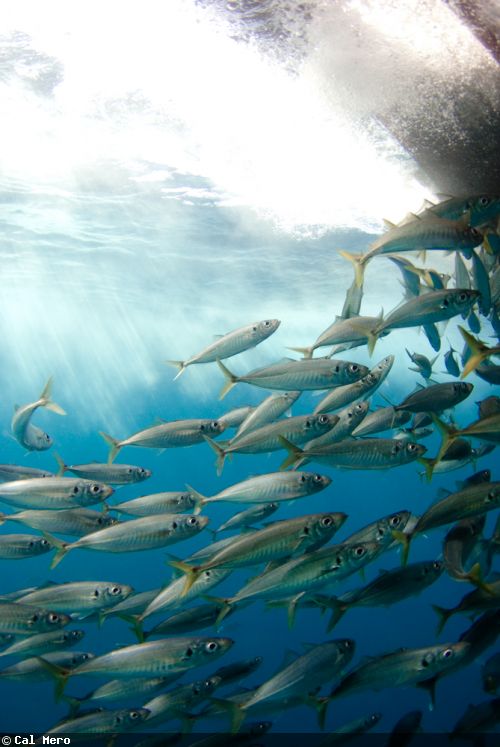 I was using two strobes both kept level with the housing and aimed outwards. This is a very simple lighting style but it was effective for what I wanted to achieve.  Overall I wanted sharp shots of correctly exposed fish with a lovely blue background and the odd sun ball thrown in for effect. Shooting from the cage required a bit of dexterity as I had to simultaneously lean out the side, while keeping an eye out for sharks but still trying to compose images. 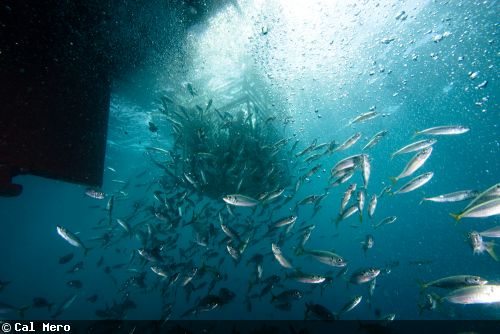 After we surfaced and dried off from our cage experience, we took the tender and motored over to a rocky island where we enjoyed cheese and wine while watching the sunset. It was truly spectacular. 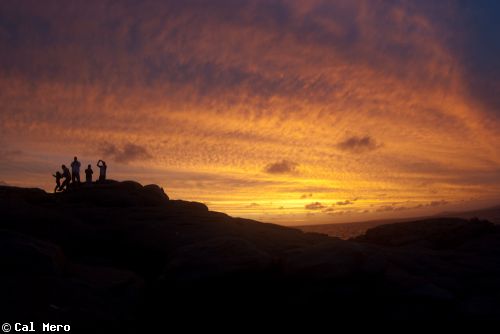 There was lots of fishing on day 3. Everyone was getting into the spirit of trying to catch something nice and tasty for dinner. Soon after though, we were greeted by 3 large bronze whalers underwater. They put on quite a show! One group of divers was lucky enough to be ascending from the seafloor in the cage when the bronze whalers arrived. However, I was in the shallow water cage at the back of the boat. The big bronze whalers made several passes and really turned on the action for the passengers. I made a very unfortunate mistake and tried to take a self photo with the bronze whaler behind me. I opened my mouth to smile and immediately got the most gut wrenching taste I’ve ever experienced – a mouth full of chum. 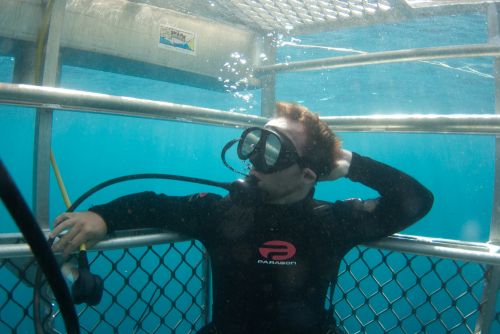 Photographing the bronze whalers was difficult because of the lens setup I chose. I took down the 10-17mm on the hopes of some close up shots with plenty of strobe light but the sharks never close enough to be anything but a smudge in the distance of the lens. This was one of the unfortunate times where the super wide angle capabilities of the Tokina 10-17mm put me at a disadvantage. If I had of been using my standard 18-55mm I would have had a better variety of images and no doubt some nice, full frame shark shots. It’s always a tough decision choosing a lens when you’re photographing an unpredictable subject. In this case, I gambled with getting an awesome close-up shot or no shots at all.  In this instance, I lost, but I’d argue that getting that ‘wow’ shot is always worth the risk.

Even though I didn’t see any great white sharks, I have to say that The Rodney Fox Shark Trip is as much a great photographic expedition as it is a shark trip. I photographed beautiful sea lions, dolphins, rare birds and incredible natural landscapes. It just goes to show you that there are always photographic subjects around when you're in the ocean. 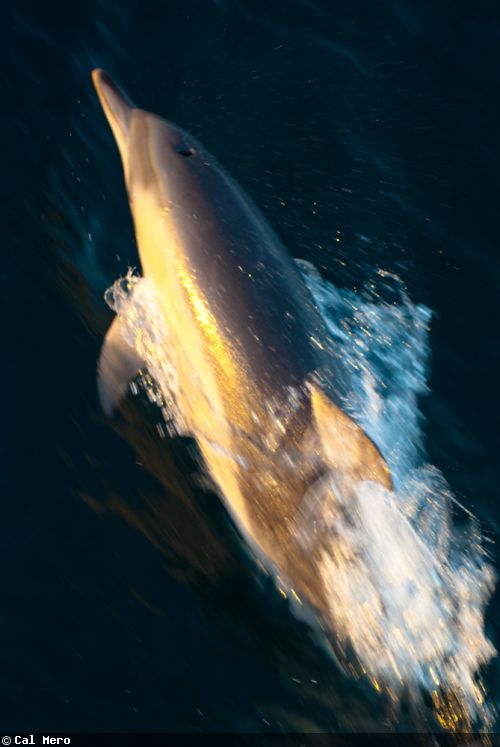