Truk Lagoon is arguably the best location for underwater wrecks in the world.  The warm waters and beautiful islands of this Micronesian destination set the stage for “Operation Hailstone,” a tremendous World War II battle in February, 1944, which resulted in the sinking or destruction of more than 44 ships and 249 airplanes.

Underwater for almost 70 years, these wrecks have come back to life as living reefs and become an underwater photographer’s dream.  With limited land operations and so many wrecks to dive, the best way to dive Truk Lagoon (currently known as Chuuk) is on the beautiful M/V Odyssey, a 132ft luxury liveaboard offering five dives a day. 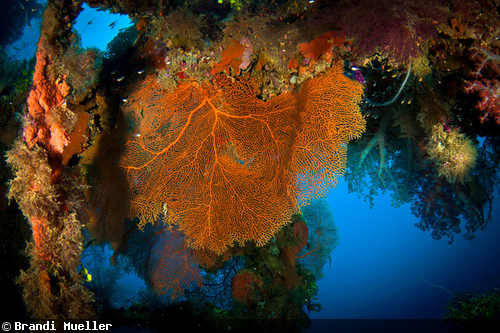 It’s fairly obvious that wrecks are the perfect candidates for wide-angle photography.  A 12-24mm or fisheye lens can help to get a large majority of a big wreck in a photo, although fisheye lenses sometimes aren’t ideal because they can bend lines and make noticeable distortion of lines on the wrecks. This effect is desired by some photographers and avoided by others.

Getting as much of the wreck in a photo as possible helps to capture the size of the subject and show exactly what it is.  Adding a diver can be helpful in showing scale, as can having another object in the shot, such as the dive boat on the surface. 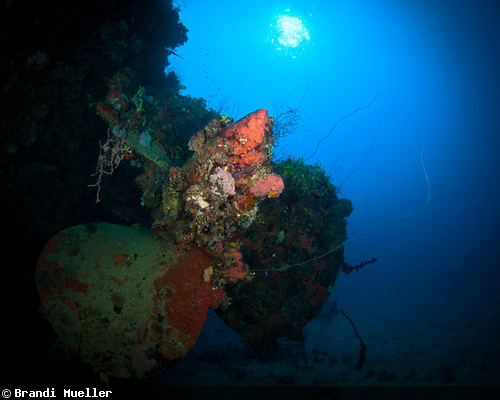 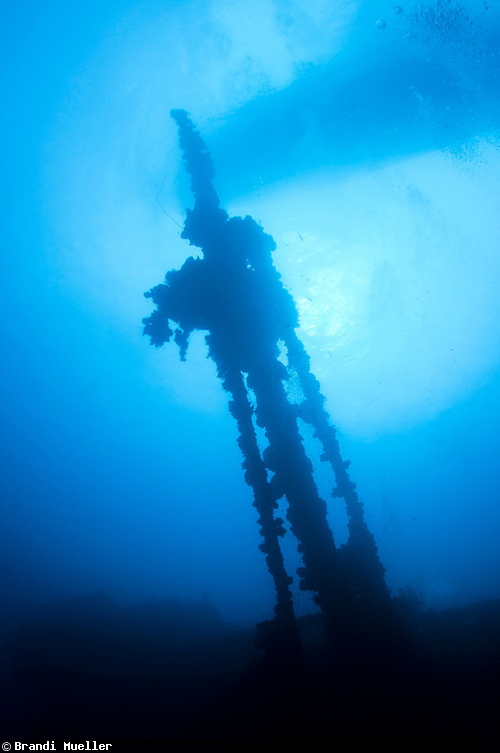 Low visibility situations – which are somewhat common – make it difficult to get an entire wreck in a shot without fading into the haze. Visibility in Chuuk varies depending where the wreck is in the lagoon, currents and other factors.  Increasing ISO can help capture ambient light shots in lower viz and usually it’s best not to use a flash as the nutrient-rich water creating backscatter.  Another option is to use a red filter like the “Magic Filter,” which adds back in much of the contrast and color without backscatter-inducing artificial lights. 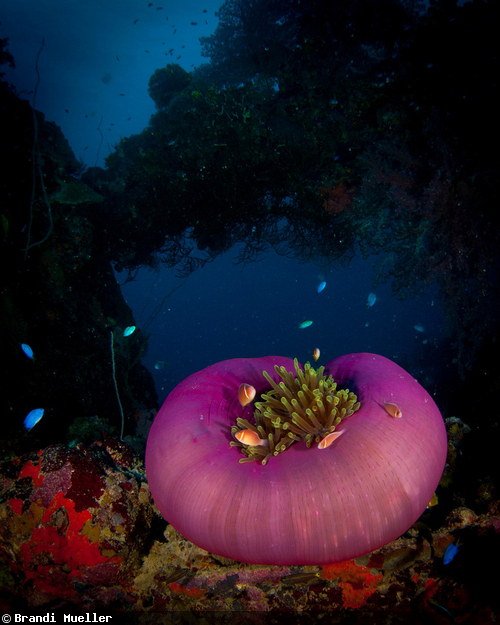 Close-focus wide-angle can create an interesting perspective in wreck photography by having an alternate subject in the foreground and the wreck in the background.  The immense life on the wrecks of Chuuk can make this really fun.  Soft corals hang from masts and davits; colorful reef fish swim through the ships; and balled up anemones are found on almost every wreck. 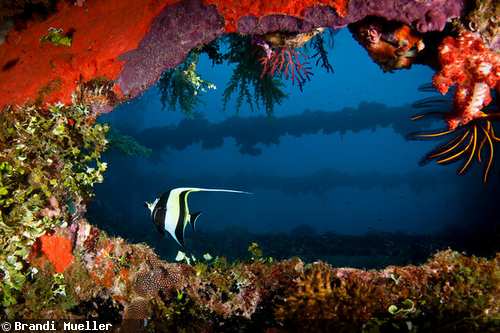 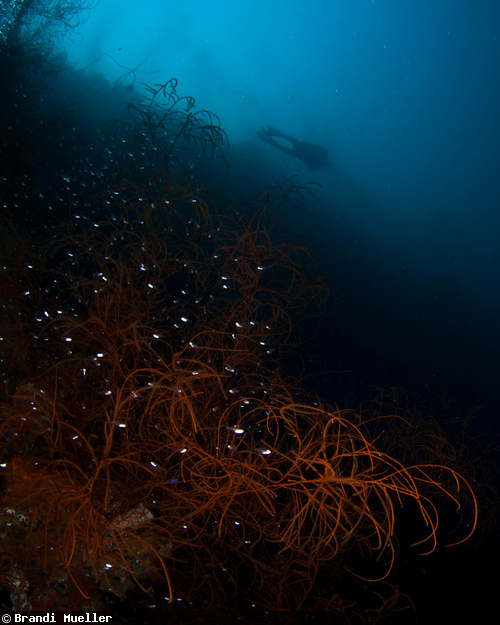 CFWA can be difficult in Chuuk because of the tendency for silt.  Strobe lights will catch the rust particles in the water making red spots in the photos.  As a result, fisheye lenses are a must for CFWA, minimizing the water column and thus particulates between the lens and the subject. Angling strobes and turning them down if necessary can reduce this, as well as being careful while diving to not stir things up. 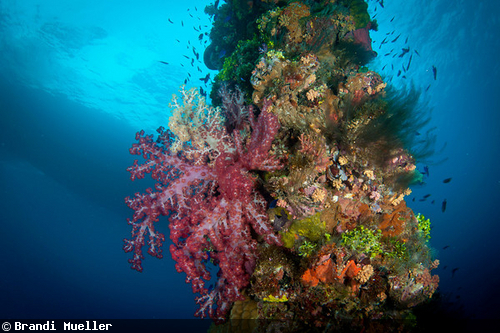 Black and White Photography in Truk

Black and white lends itself nicely to wreck photography giving the viewer a sense of time and age.  It also can help improve a very blue photo by converting to black and white to show contrast and depth. 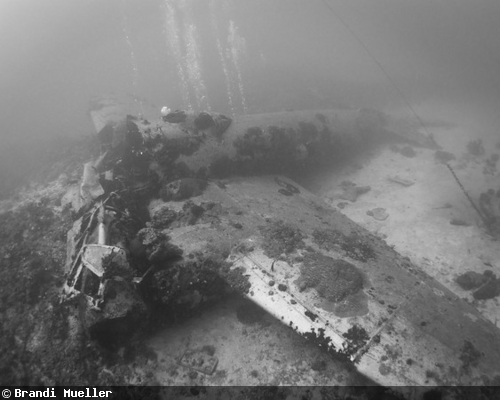 Using black and white filter software, like Nik’s Silver Effects gives the photographer a number of options that reflect different exposures and effects. 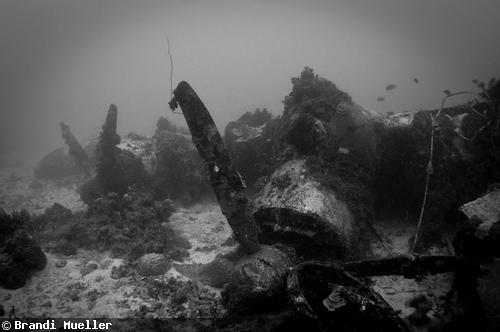 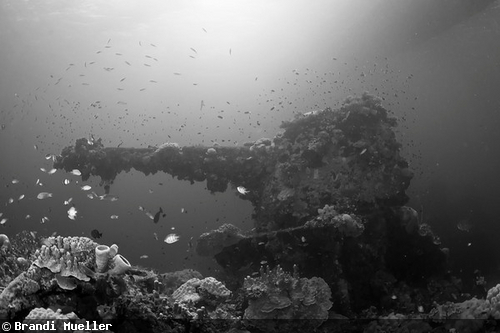 Including divers in wreck shots is a great way to show the scale of the immense wrecks, and to put them in perspective for the viewer.  In Chuuk, where many of the wrecks tower at more than 400 feet long, establishing this perspective is especially important and can create a sense of awe. Showing a diver inside a wreck helps show a view of what it’s like to be inside these ships underwater. 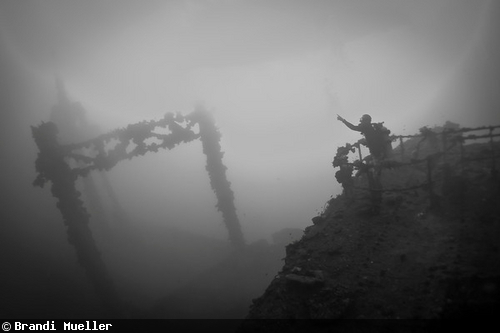 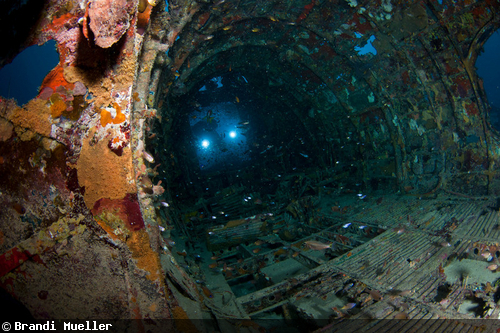 Because these ships were sunk in war, much of what was in the ship’s cargo holds in 1944 is still there.  Throughout the lagoon different wrecks hold torpedoes, bullets, sake and beer bottles, china teapots, bicycles, books, vehicles, medical kits, and many other objects one usually doesn’t expect underwater.  These artifacts can make for exciting underwater photos. 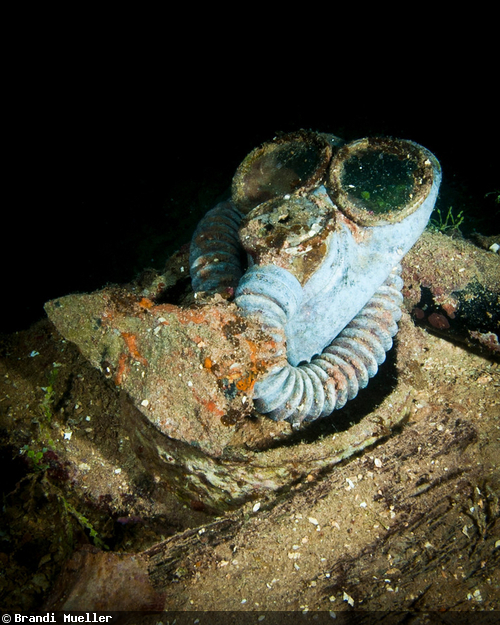 The Hoki Maru is a popular wreck to go into because it was carrying construction equipment when it sank.  Cargo hold number five has bulldozers, trucks, tractors, and other intact vehicles at about 130ft.  The Rio de Janeiro Maru has a “bottle room” where boxes and boxes of beer were stored. Many of the ships have accessible engine and generator rooms where you can see gauges, knobs, and handles still intact.  Human remains can also been seen in several wrecks. 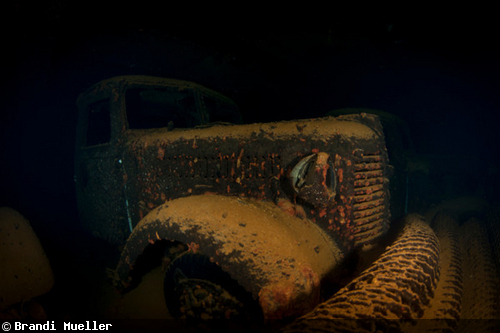 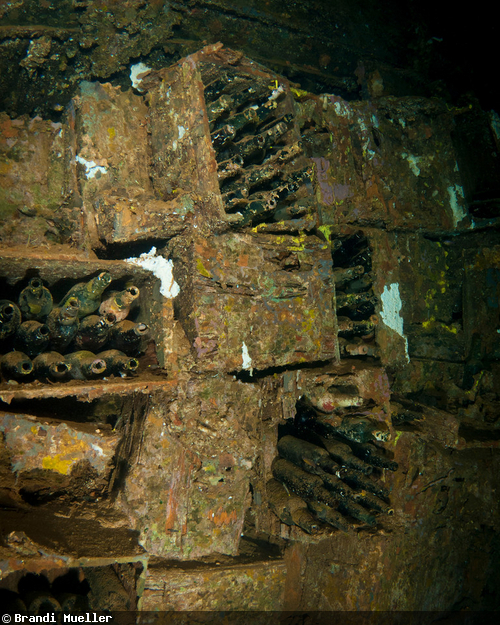 In any of these spaces can be very easy for visibility to decrease from silt.  Exhaled bubbles can knock rust from the ceiling and your fins (or your buddy’s) can easily stir up silt.  Good buoyancy is required, and it’s a good idea to plan your dive on the surface and decide what you want to shoot, especially if working with a dive model.  Then, go to those areas in the beginning of the dive before other divers have the opportunity to swim through those areas and reduce the viz.

By getting close to your subject and keeping your strobes pointed out at 45-degrees, you can greatly reduce the amount of backscatter. Usually reduced strobe power is necessary to keep the shots from becoming over blown in tight spaces. 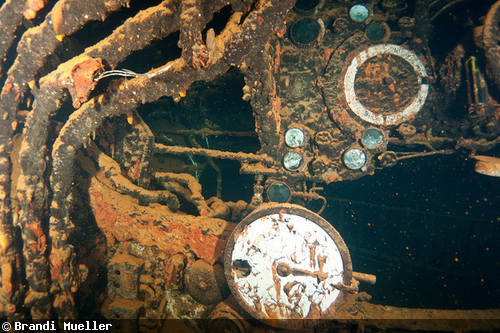 Okay, it’s mostly wrecks.  But it’s still Micronesia and the wrecks have become fantastic artificial reefs covered in life and home to sharks and large schools of fish.  It’s hard to switch over to a macro lens when there’s such great wide angle opportunity, but while diving on the Yamagiri Maru the dive guide pointed out a fluorescent anemone, so during the second dive I went to photograph it, only to discover it had balled up in a crevasse of the wreck and was hardly visible.  On closer inspection there were eggs just next to the edge of the anemone. 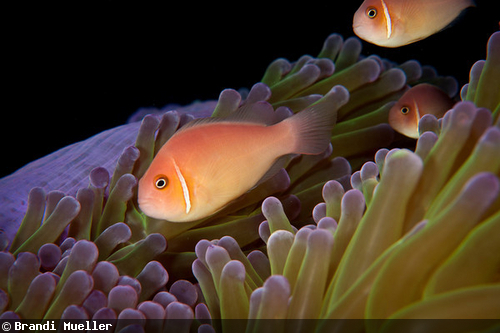 The Odyssey offers night dives as well, which is another great time to break out the macro lenses.  For the macro lovers there are nudibranchs crawling on the ship decks, damselfish, gobies, and plenty little critters to find. 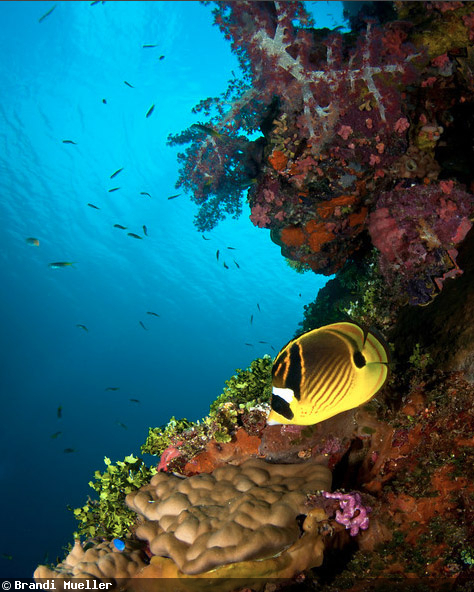 Special Considerations for Diving the Wrecks of Truk

It is important when diving this location to remember that the wrecks here were not artificially sunk and therefore pose a few extra safety concerns when diving them.  These wrecks weren’t cleaned out for divers before sinking and therefore have some hazards to watch out for such as structural damage inside the wrecks and potentially active ammunitions are still inside.

Many of the wrecks are deeper, so it’s imperative to keep an eye on bottom time and how much air you have.  Penetrating the wrecks should only be done with proper training and a dive guide.  The Odyssey’s knowledgeable dive crew can help each diver get the most of the diving at their experience level (and photography goals) both leading dives and with thorough explanations of where to go on each dive. 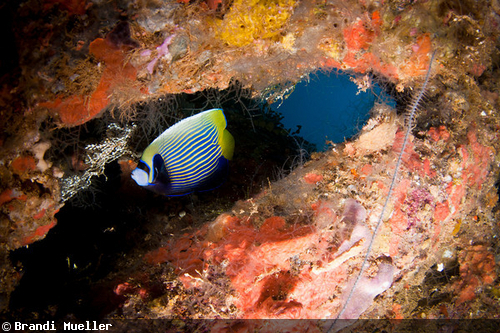 With so many wrecks in the lagoon, and many of them being more than 400 feet in length, multiple dives are needed to photograph the wrecks in their entirety. The Odyssey liveaboard is the best way to see the most wrecks and get the most bottom time out of a week. 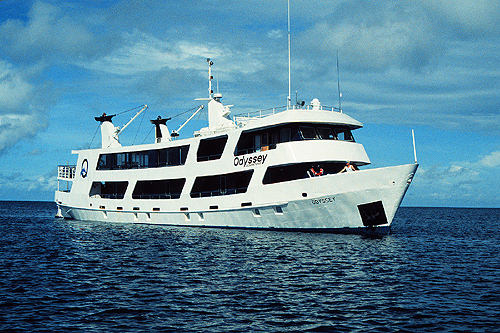 The beautiful boat has a large dive deck, cabins, great food, they provide excellent photographer services with a large camera table, numerous charging stations, and the boat has a fantastic crew.  Besides guiding excellent dives, several of the crew are photographers and videographers and during their briefs give great information on what to shoot how to get the shots of the best parts of the wrecks.  They are also fantastic dive models.

My week on the Odyssey only left me wanting more dives and planning my next trip back.  With so much life on so many wrecks, the photography opportunities are endless. 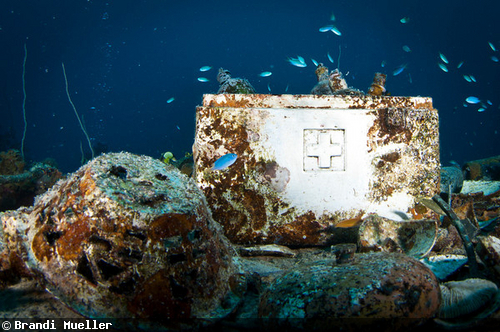