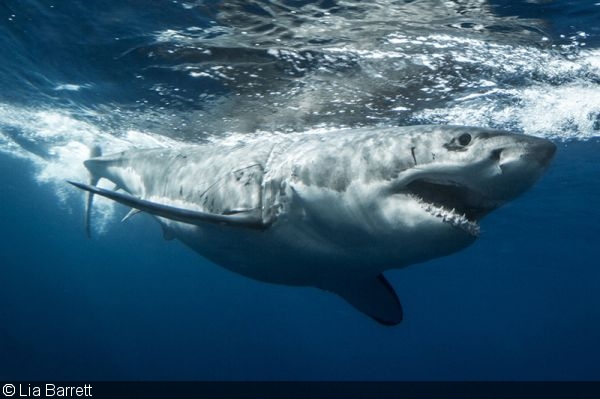 A great white shark lunges through the shallows off of Guadalupe Island, Mexico

“Have you ever been diving with great whites?” This is usually the first question you get when people find out you’re an underwater photographer. Given that I was certified at age 16 and that I am more than twice that age (plus a few years)—I have been asked that many, many times. And I’ve always had to say, “Not yet, but someday…”—while making a mental note to get my butt to see the much-feared, highly revered creatures.

Finally, after years of patience, I was able to stowaway aboard the Solmar V. As part of a photo shoot for Prawno Apparel, we set out to the Jurassic Park-esque island of Guadalupe—where the waters are flush with these prehistoric behemoths. 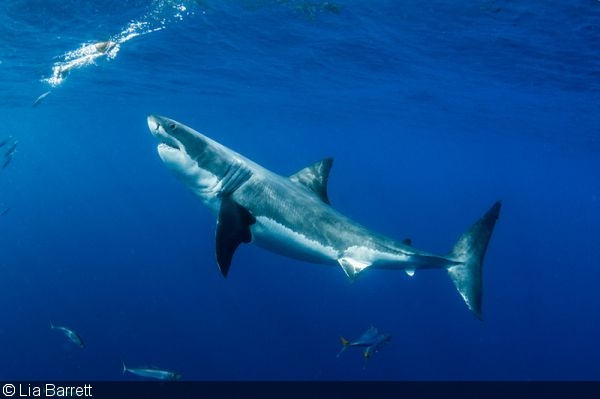 Pelagic Fleet is a dynamic company running big animal liveaboard and daytrips in Mexico. Whether it’s great white cage diving at Guadalupe, schooling hammerhead sightings around Socorro, or humpback whale watching off Cabo San Lucas, this operation does Baja—and it does it well. Their passion for the peninsula is subsequently translated into the experience, which I found out as soon as I boarded the bus in San Diego and met Carlos.

To get to Guadalupe, you are picked up in San Diego in a comfortable coach—wrapped in an epic sharky image—and trucked comfortably over the border. Even for those who overpack (ahem, me), it is quite a pleasant border crossing thanks to Carlos’ energetic ability to wrangle luggage carts and help fill out paperwork.

From the border, the coach hugs the coast on a scenic drive to the port town of Ensenada. Along the way, Carlos points out various landmarks, including an enormous Jesus that makes you feel like you’re approaching a very mini Rio. He shows images of his favorite sharks—and gives you the skinny on recent shark encounters. His contagious enthusiasm adds another layer of anticipation to my journey so many years in the making. 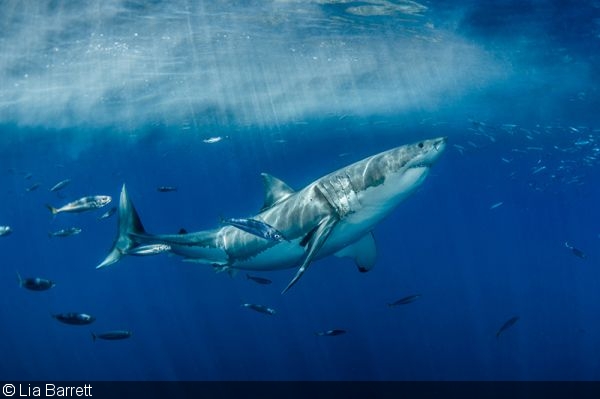 Love great white sharks? Yeah, so does the crew of the Solmar V 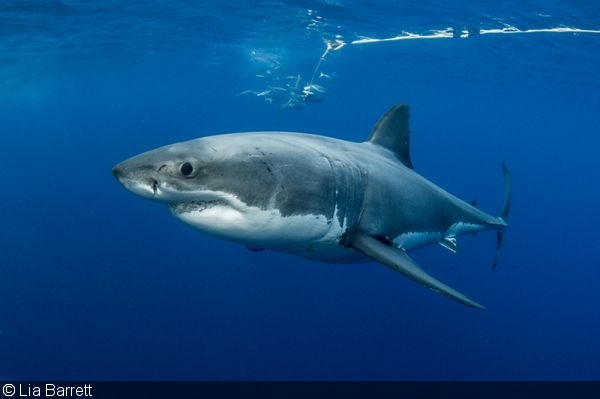 Odds are you’ve been asked whether your diving experience includes great white sharks. Answer with a resounding “yes” by joining a trip on Solmar V

Once in Ensenada, you board the Solmar V, a lovely 112-foot boat equipped with enough camera room, booze, food and ease to satisfy any snap-happy vacationer. Loaded onboard are three nine-foot long green metal cages, and a rather impressive crane that is used to lift said cages into the Pacific Ocean. The crew numbers about one for every two guests and is one of the hardest working you’ll find. From gearing you up at 7AM to serving you drinks at 7PM, there is no rest for these dedicated ocean stewards. (Tip: Make friends with the kitchen staff, as they are the ones who bring you delicious, hot soups as soon as you get out of the cage, as well as tasty mojitos and margaritas at the end of the day!)

Once onboard and pleasantries exchanged, you set off for Guadalupe. It is here that I encourage folks to down some Dramamine or other seasickness medication of choice. There is no shame. Just do it. It takes roughly 20 hours for the Solmar V to complete the 165-mile crossing through the open Pacific Ocean. I made the rookie mistake of not taking anything. Though I didn’t chunder (as the Aussies say), I was had to miss most of dinner and dessert prepared by Chef Tony—which were the bomb. 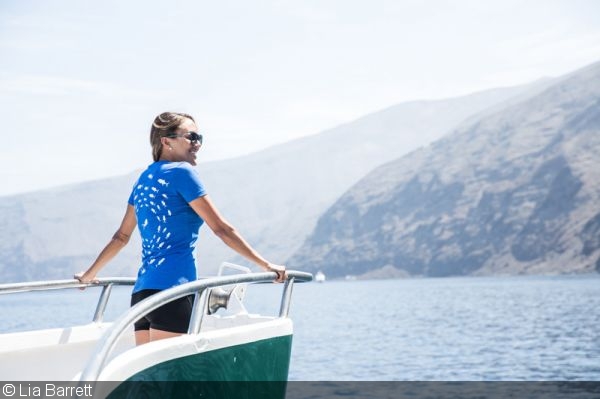 The arid, barren Guadalupe Island is a stark contrast to the rich seas surrounding it 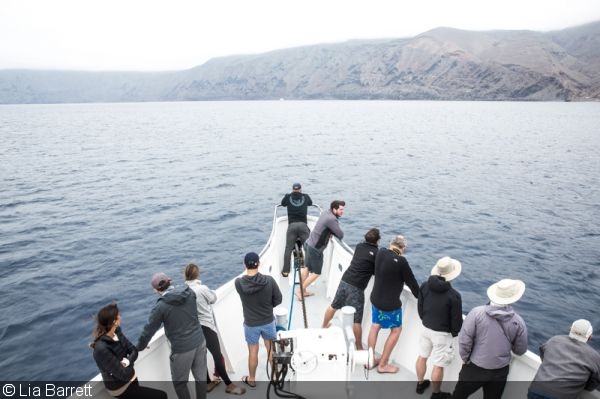 Jumping in the Shark Cage

The morning following the crossing, I am able to stand and am wowed by the stunning sight of Guadalupe Island. I observe sea lions frolicking along the shore, elephant seals head bashing on the beach, and the great whites lingering in the fringing waters hoping to catch breakfast. The clouds roll over the peaks of the island and the cool air makes gives you a surreal sensation that it shouldn’t feel this dry and arid.

As soon as we anchor, the team lowers the cages into the water and the pool is open. The sharks show up within the first hour, and we pour into the cages, firing off our first shots. The two shark wranglers play a game of cat and mouse with a piece of bait on the end of a string, luring the sharks in with the scent of oily fish. We have a marine biologist on-board to monitor our interaction and the sharks’ behavior. It is actually rather safety-oriented for you and for the sharks, not the feeding frenzy that many would envision. So, if you have been holding back checking out these incredible animals for this reason, I’d strongly urge you to reconsider. 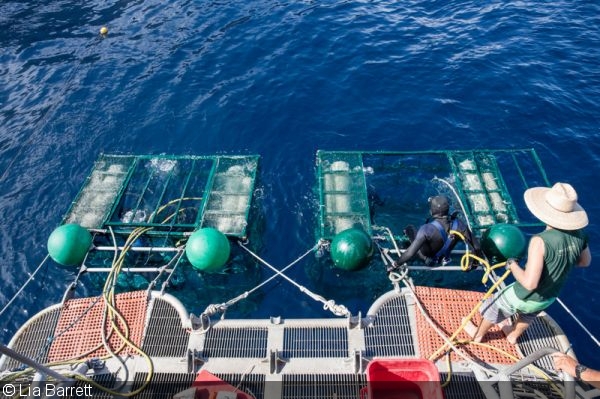 A diver enters one of the surface cages, while a crew member works hard to make the process as easy as possible 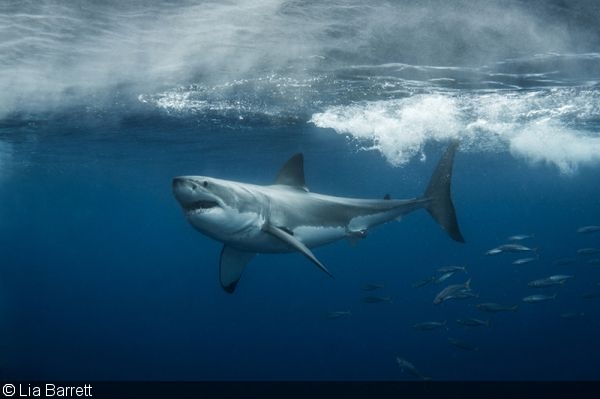 We quickly get into a rhythm of taking turns sliding in and out of the cages. Everyone is super stoked to be there, so time in the cage is precious. Each surface cage holds four people, while the submersible cage dips down to 30 feet and holds another two. You’ll need to get out of the cage to refuel and rehydrate, but spending as much time underwater gives you the best chance for killer photos. Oh, and as for that rehydrating necessity: Just pee in your wetsuit. It keeps you warm and everyone is doing it anyways. 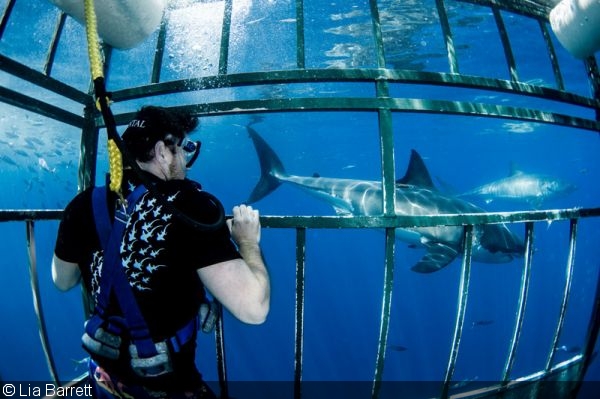 A view from the cage: A great white passes by a diver donning Prawno gear

Getting Your Fill of Great White Photos

After three straight days of jumping in and out of cages, finding the best spots to stick my lens through, and waiting for those sweet spot shark moments, I am beat. As a 5’3” person, I expelled a lot of energy to keep up with the taller dudes who practically rest their arms on the high openings of the cage. I had to monkey crawl my way up and rest my camera on the bars—staking out my spot so that the large-and-in-charge kind wouldn’t block the best viewing areas.

But it is worth the extra exercise. And despite the fact that I probably didn’t totally compensate for the calories in the tres leches, chocolate cake, and voluminous burritos, I feel like I came, I saw, and I got some satisfying shots. I even conquered the sea thanks to some motion sickness drugs. And it is a phenomenal experience that I would do again in a heartbeat. 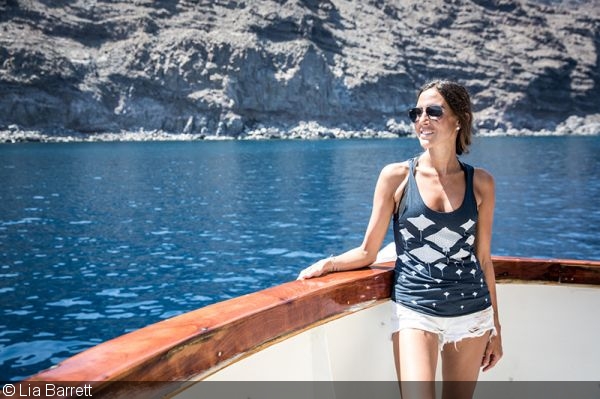 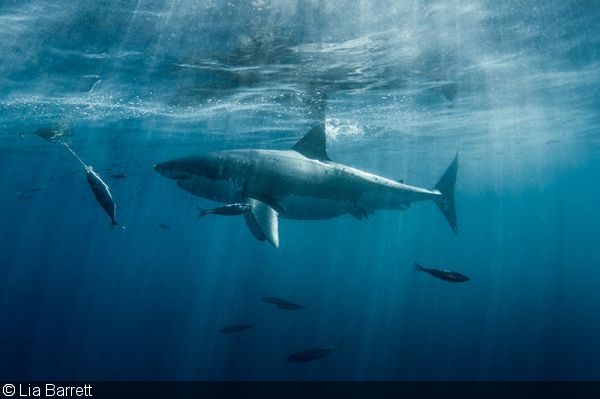