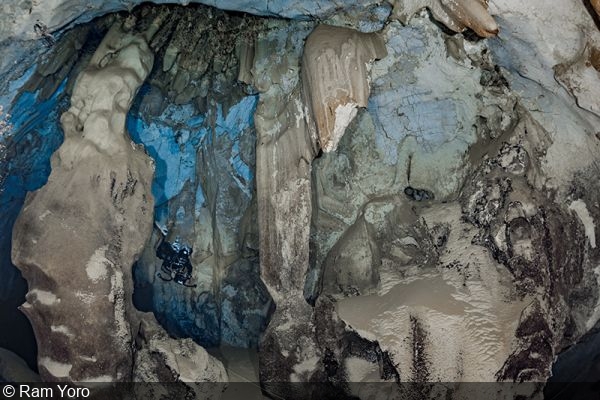 Paglugaban Cave has five chambers adorned with surreal colors and shapes. This is the third chamber

With 7,641 islands, the Philippines is truly gifted with reef-rich coastlines to awe divers. The abundance and accessibility of reefs all over the archipelago makes it a much-desired diving destination. However, some of its gems are hidden in plain sight. Being mostly karstic, the islands are idyllic hosts to underwater cave systems as well—living museums that shelter a host of natural wonders and surreal colors. The antiquity of cave systems itself is a cause for amazement, and its otherworldly features—the speleothems, the glitter of imbedded minerals, the persisting remains of previous residents—inspire jaw-dropping awe. Paglugaban Cave is one of these gems and is considered the grandest of them all.

The cave, for all its natural wonders, did not immediately achieve fame for its majestic beauty. Located in El Nido, Palawan, in central Philippines, Paglugaban Cave has had an inauspicious start in the consciousness of the diving community. About four decades ago, three out of five unsuspecting recreational divers perished inside the cave, giving it a reputation as a monstrous castle that devours impetuous wanderers. Since then, it was left in isolation—as if the loneliness it endured for more than four millennia since its geologic inception wasn’t enough. 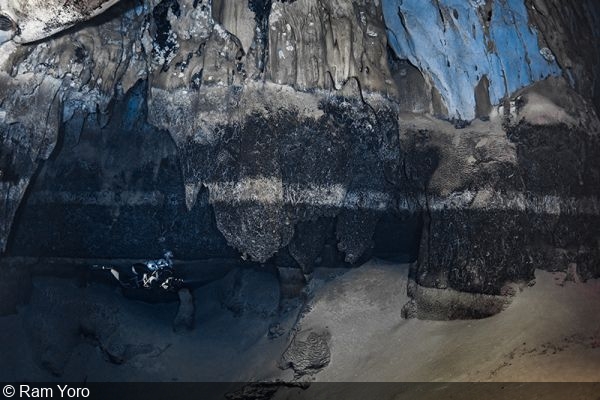 In recent times, however, thanks to the increasing popularity of cave diving, the general hesitations and fears associated with exploring underwater caves are slowly being upturned. The advent of proper training, knowledge, and practice for underwater cave exploration paved the way for the rediscovery of the fearsome Paglugaban Cave. When it did finally happen, it was a sweet reunion, where the cave this time graciously welcomed cautious visitors. Paglugaban Cave has since displayed the full magnificence of all its five ethereal chambers for all to enjoy. 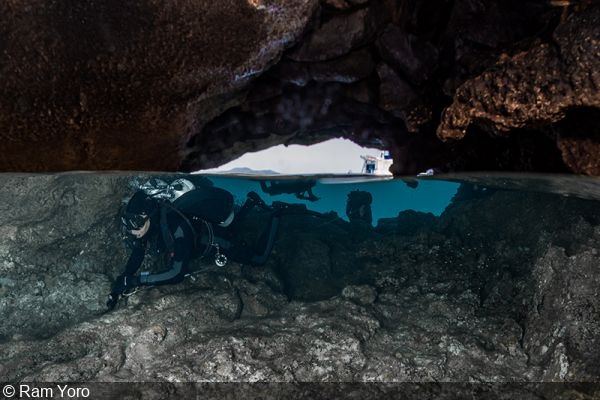 The entrance as viewed from inside the cave

Geologic history indicates that the karsts making up the islets of El Nido—including Paglugaban Island, which hosts the cave—are at least 300 million years old. Over time, rainwater dribbled on top of the islets and slowly sought its way down through the earth, melting masses of karst beneath along the way. This was how the various dry cave systems in the area, for which El Nido is famous, were formed. Geologists estimate that Paglugaban Cave underwent this process about 4,000 years ago. And as the global water level rose through the years, the dry cave became submerged, turning it into the underwater cave system that we see today. 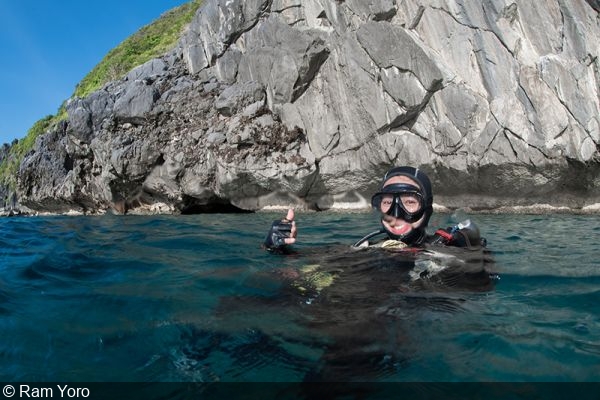 Diver Mic points out the opening of the cave. Notice the karstic features of the island

Paglugaban Cave’s entrance sits right at sea level. It is about two meters wide by a meter-and-a-half high, and half of its vertical clearance is submerged. For this reason, it is easy to spot and often invites curiosity from the outside. In the past, locals have been known to swim a few meters into the cave to catch delicacies such as lobsters.

The entrance stretches to about 30 meters inside until it reaches the first chamber. The passageway is half-submerged, so there is airspace all the way to the spacious chamber. Somewhere halfway from the cave entrance to the first chamber, it is possible to surface and pay respects to a foot-tall statue of the Virgin Mary.

At the end of the first chamber, the air pocket vanishes and the advance continues in a full overhead environment for about 80 meters until divers enter the second chamber. The travel won’t be dull, though, as gigantic rock formations and speleothems shaped by ancient water flow will keep passersby in awe. 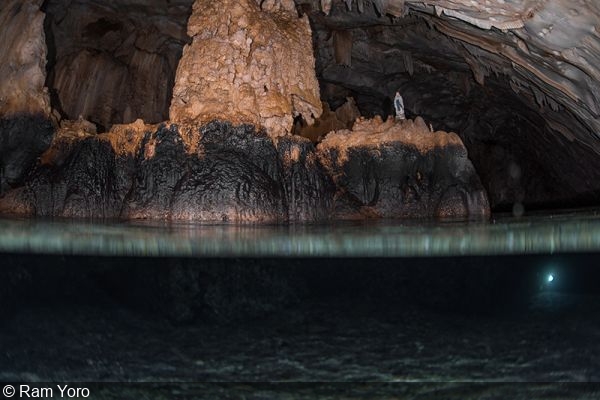 The first chamber with the Virgin Mary amongst speleothems. A diver approaches from afar 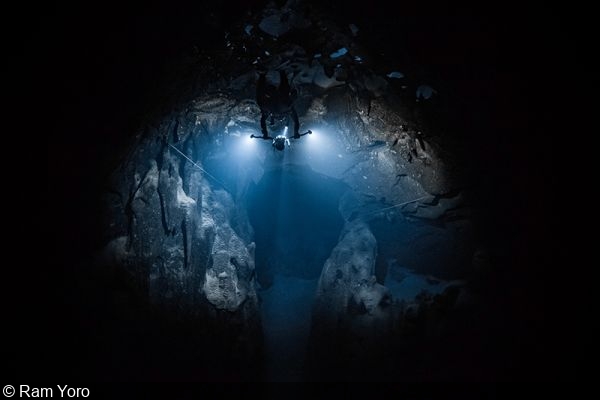 Diver Alex cruises the passageway leading to the second chamber

In the massive second chamber, you will find a huge dome-shaped space that’s about 50 meters in diameter. The dome houses an air pocket and a reasonably-sized elevated dry area where explorers can actually surface and walk around. It is said that two wandering survivors from the past tragic incident took refuge here in pitch black for three days before their rescue. In the same dry area, there is a small cross and another statue of the Virgin Mary, erected on commission by the grateful survivors decades after. 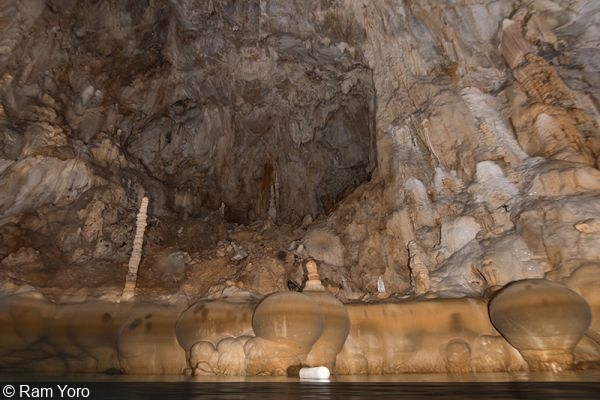 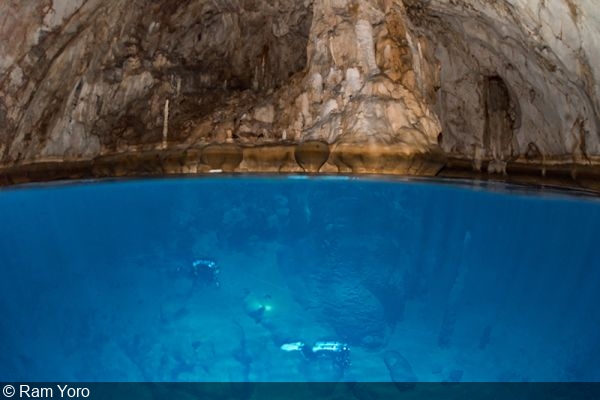 Divers swim below the dry area

The deepest part of the second chamber goes down to about 33 meters, where stark reminders of those who were not as lucky from the same tragedy lie in perpetuity—a snorkel, weight belt, and an old-fashioned pink torch. Interestingly, scattered in the shallower depths of the second chamber are the remains of various crustaceans and skeletons of small fish, including what appears to be a turtle carapace–vagrants that also perhaps lost their way in the darkness. All of these are reminders that the cave can be indiscriminately unforgiving to those who are not cautious. 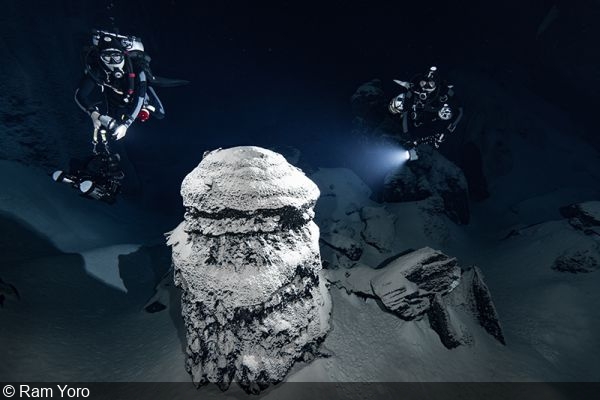 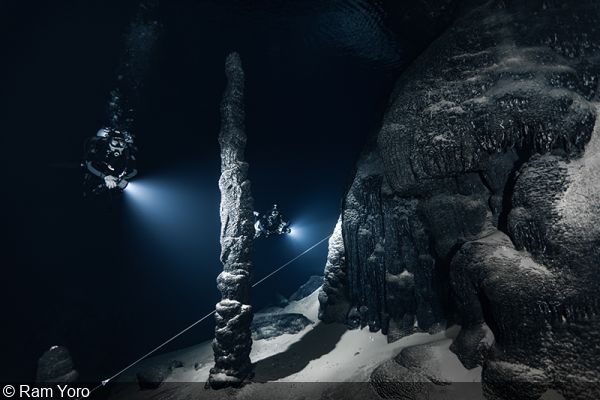 A totem pole in the shallows of the second chamber

Somewhere along the shallow walls of the second chamber is another opening, about a meter-and-a-half in diameter, which leads to the third chamber. The passage is a bit tight, but upon admission to the chamber, it is all worth it. Imagine a dome with smooth, colored walls and elaborately shaped pillars. The ceiling and walls look like abstract art by a master painter, reflecting various shades from palettes of blue, green, yellow, and brown. The elegant pillars, molded by ancient water flow, stand proud, holding the dome up like a medieval cathedral. 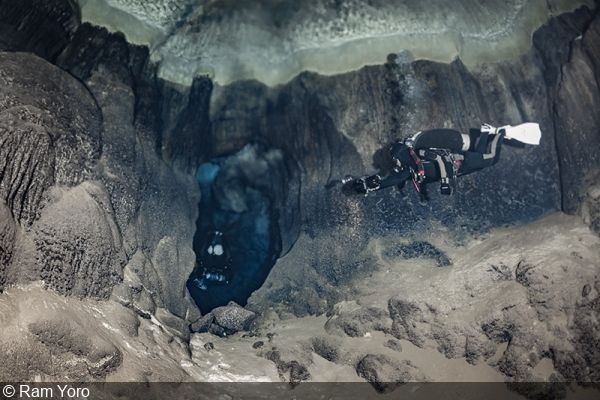 Divers queuing to proceed to the third chamber 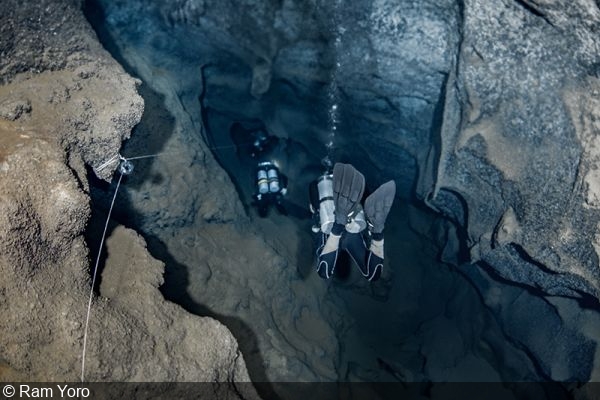 The narrow passageway to the third chamber 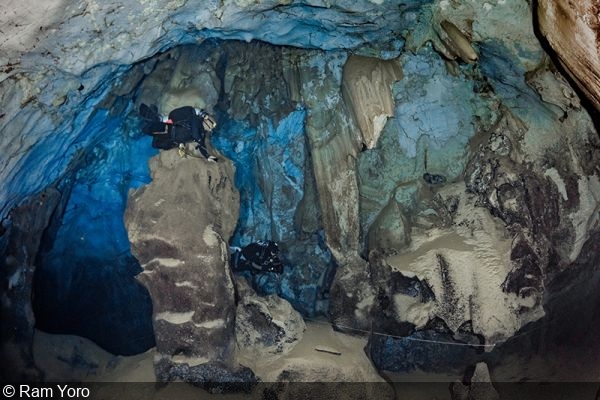 A rewarding sight upon arrival at the third chamber

Behind the pillars is the entry to the fourth chamber. The first glimpse of the chamber will reveal speleothems on the left side—huge stalactites and stalagmites, some almost meeting halfway. On the right is a long wall that resembles colorful tapestries similar to the visual spectacle in the third chamber. The beauty of this chamber, however, is often cloaked by a halocline that shrouds the water with only the slightest disturbance.

The halocline is brought about by the mixture of seawater from the outside and fresh water constantly seeping from the ceiling. The fourth chamber runs for about 40 meters, and at the end, it narrows into a tall passage going into the last chamber. Before getting there, an intact giant grouper skeleton about five feet long gloomily lies in the middle of the passageway—a reminder not to lose your focus. 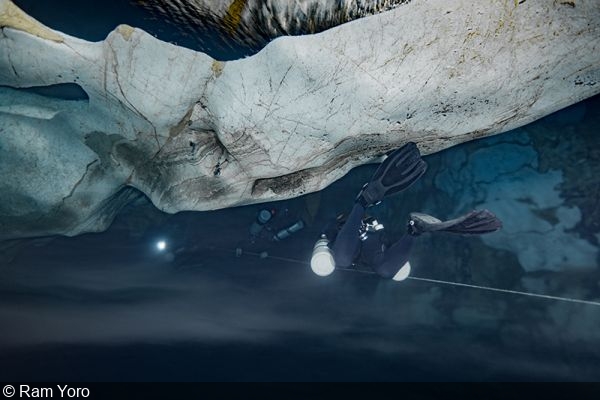 The ever-present halocline in the fourth chamber 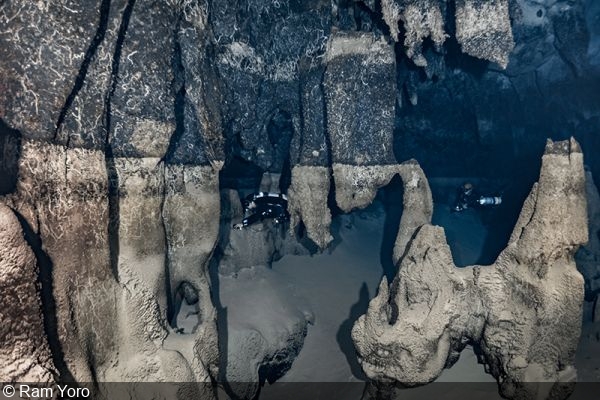 Huge stalactites and stalagmites meet halfway in the fourth chamber 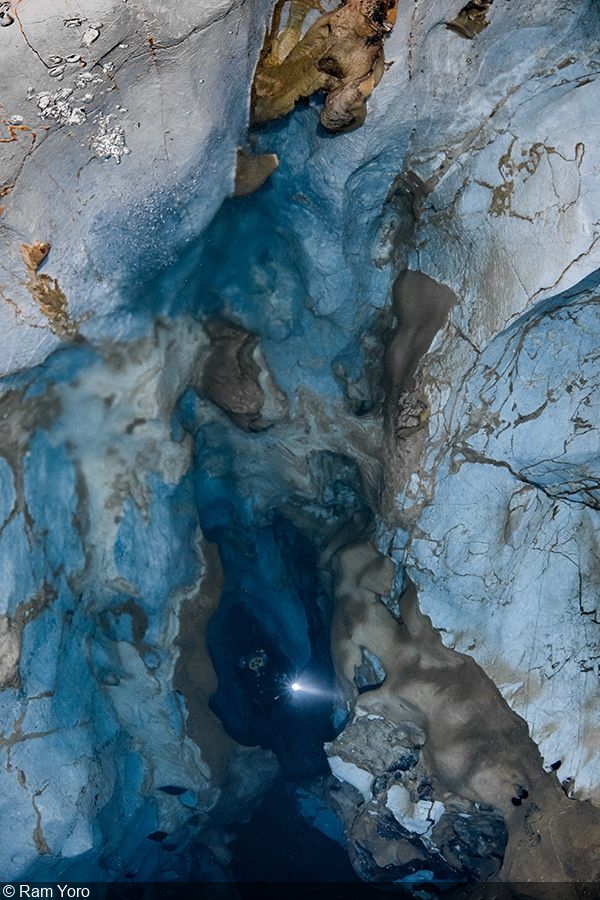 The fourth chamber’s smooth, colorful walls—features present from the third to the fifth chambers 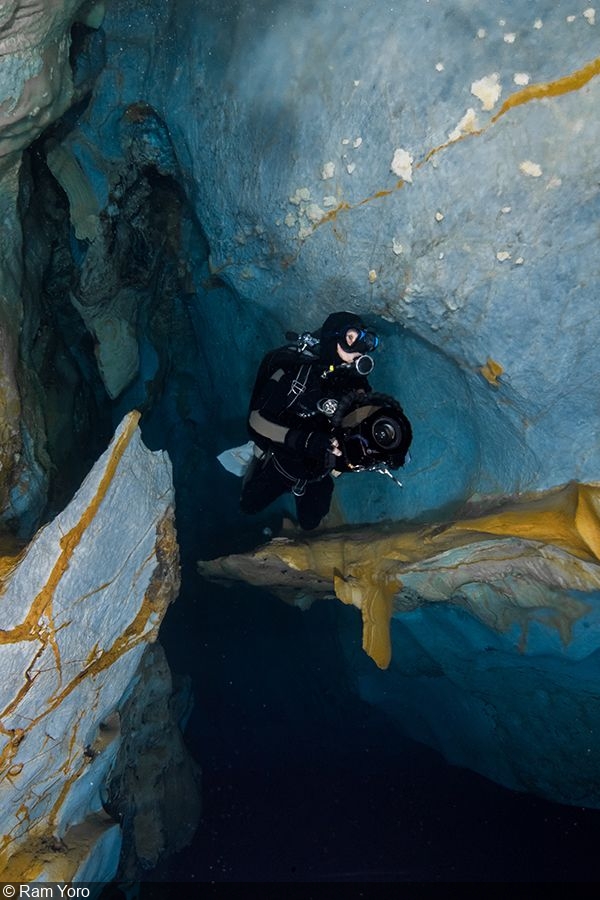 The surreal ceiling of the fourth chamber

Upon arrival in the fifth and final chamber, a huge cathedral-like dome adorned with colorful smooth walls, stalactites, and stalagmites greets explorers. In one corner of the ceiling is a huge collection of stalactites that remain luminous for a few seconds after you point your torch at them for about a minute.

At the farthest end of the chamber is evidence of an obvious cave-in from the ceiling. The rubble from the cave-in consists of rocks and various coral fragments, which indicates that it is on top of the open reef at the other end of the island. At the foot of the rubble, the cave again reminds visitors to be cautious with the sight of another intact giant grouper skeleton. 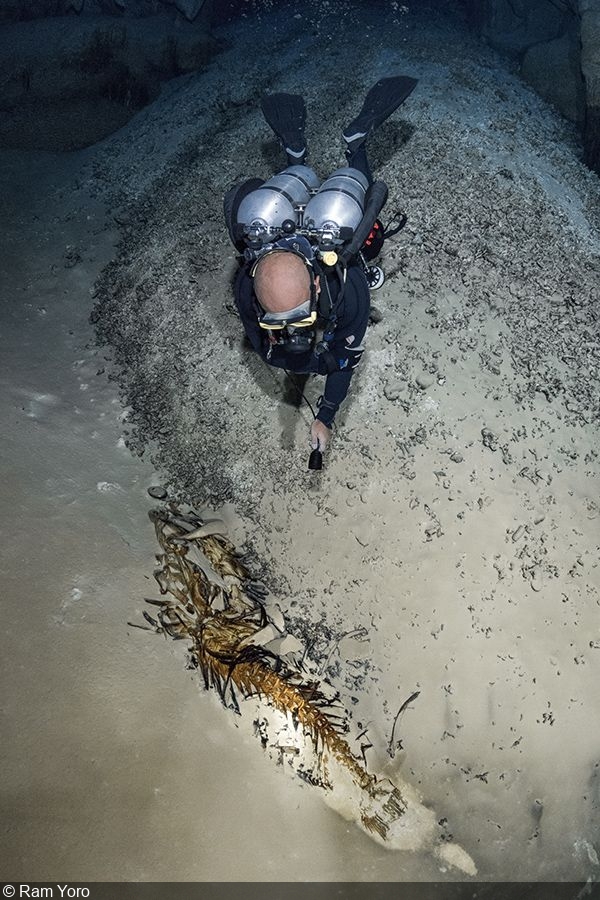 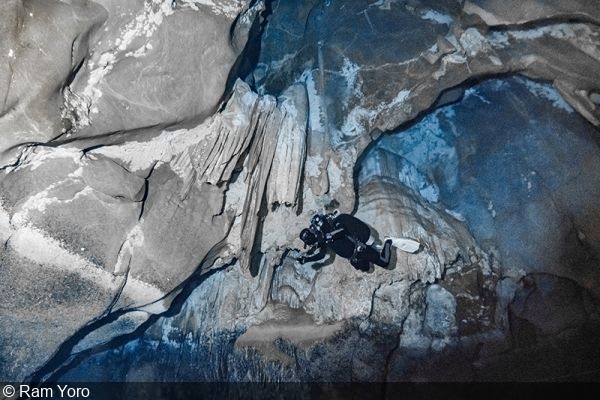 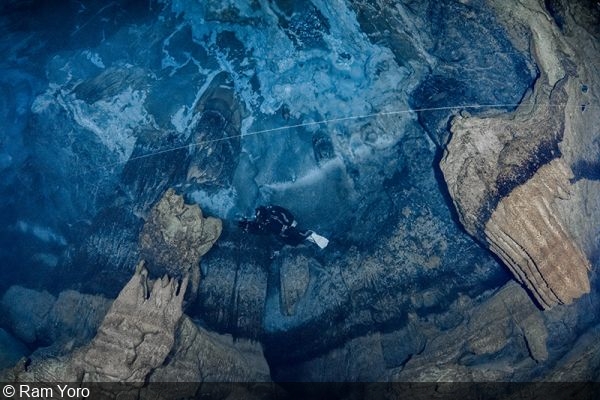 The cathedral-like dome of the fifth chamber

As is usually the case when trying to articulate beauty, words cannot completely convey the full visual grandness of Paglugaban Cave. But hopefully, this article has given you a glimpse of the treasures that await.

As more and more visitors are welcomed by Paglugaban Cave, keep in mind that in an instant, it can turn into an unwilling host—much to the detriment of any guests. However, those who venture deep within this cave with a sense of respect and caution will be treated to the grandest visual spectacle of any underwater cave system in the Philippines. 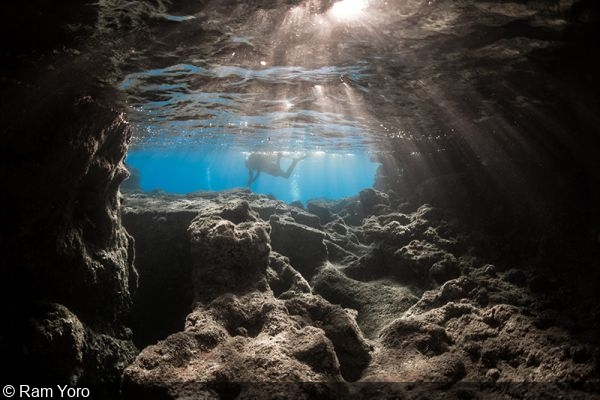