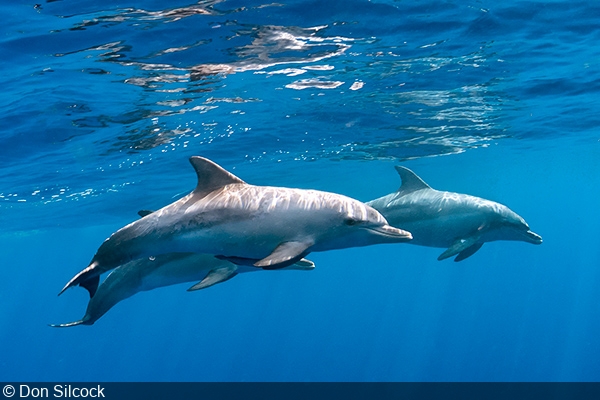 The stars of the show: Ogasawara dolphins

Located in the northwest Pacific Ocean, about 600 miles south of Tokyo, the Ogasawara archipelago is one of the most isolated and remotest parts of Japan. Despite their distance from Tokyo, the 30-plus Ogasawara Islands are administered from the Japanese capital and the only way to get there is also from Tokyo, on the weekly ferry service—there are no airports on any of the islands!

The isolation of the archipelago, combined with the fact that the islands have never been connected to a continent, is said to have produced a “Galápagos effect,” with flora and fauna that is unique to the islands. Plus, because they are one of very few significant landmasses in the northwest of the Pacific, the islands provide a much-needed safe refuge for many endangered species.

Volcanic in nature, the islands are visually quite remarkable, rising spectacularly out of the surrounding deep waters and oceanic trenches. The archipelago is at a similar geographical latitude to the more well-known Okinawa Islands and shares the same subtropical climate, with warm temperatures all year round.

Similarly, the reefs around the Ogasawara Islands are rich in corals and fish life, but it is the bigger creatures of the underwater world that convinced me to make that long journey: The archipelago has a resident population of sperm whales and is visited by northern humpbacks every year. 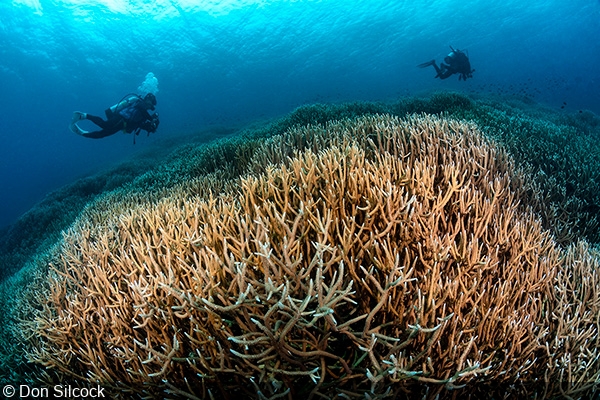 Healthy hard corals on the reefs at the Ogasawara Islands 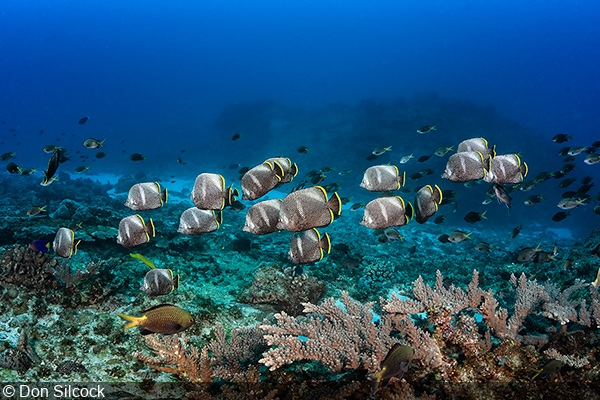 Wrought-iron butterflyfish glide over the reef

Simply traveling to the Ogasawara Islands is an adventure, quickly immersing you in an interesting mix of Japanese culture, protocol, and the country’s amazing infrastructure. My personal journey involved getting from Bali to Tokyo’s Haneda Airport, which is built on reclaimed land in Tokyo Bay, so it’s effectively “downtown” as opposed to Narita, which is 25 miles outside of the city.

The Ogasawara weekly ferry departs from Takeshiba Pier, in the harbor area close to Tokyo Bay—which means negotiating the excellent, if initially completely mind-boggling, Tokyo rail system. Boarding the ferry, the Ogasawara Maru, is done with true Japanese courtesy and efficiency, and you quickly realize that foreigners are few and far between on this journey.

The ship itself is excellent, with restaurants and vending machines for everything you might possibly require for the 24 hours that it takes to get to Futami Port, on the main island of Chichijima. Overall, it is an interesting and immersive journey, the hardest part being getting your diving and photographic equipment from the airport to the pier! 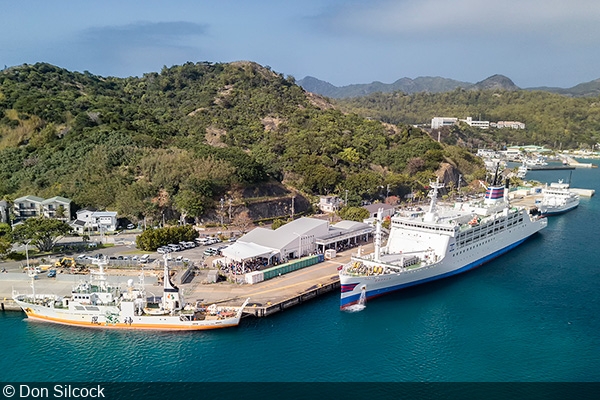 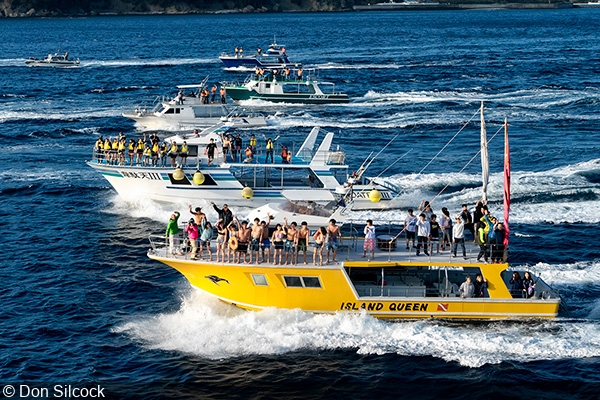 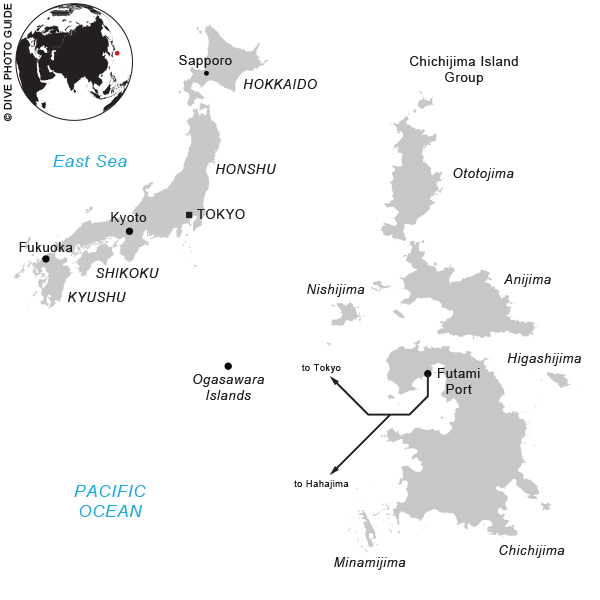 The Ogasawara archipelago is also known as the Bonin Islands. The name derives from the Japanese word bunin, meaning “no people,” and to this day only two of the islands are inhabited: the main island of Chichijima (Father Island), which is home to about 2,500 people and is also the seat of the municipal government; and Hahajima (Mother Island), which includes Ogasawara Village, with around 450 permanent residents.

The Ogasawara Islands were discovered in 1593 by Ogasawara Sadayori, who claimed them for the Tokugawa Shogunate. But they remained largely uninhabited until 1830 when a small group of Westerners and Pacific Islanders established a colony on Chichijima. The islands officially became Japanese territory in 1875, and later served as military bases during World War II, after which they were occupied by the US until 1968 when they were returned to Japan.

Chichijima, the largest of the Ogasawara Islands, is mountainous and covered in rich subtropical forest with white sand beaches and steep rocky cliffs. It is a popular destination for domestic tourists, who come here for the whale and dolphin watching. Hahajima is 25 miles south of Chichijima, and is smaller, less developed and only accessible via the regular ferry between the two islands.

The reef systems around the main island of Chichijima are generally in excellent condition with healthy hard coral growth. There’s a wide variety of tropical reef fish, including the wrought-iron butterflyfish (Chaetodon daedalma), a species native to southern Japan and relatively common around the Ogasawara Islands.

There is also a healthy population of sand tiger sharks that congregate in Futami Port around a wreck on the eastern side of the large bay at the entrance to the main harbor. Interestingly, the sand tigers enter the main harbor to hunt at night and can easily be seen in the lights from the pontoons.

Overall, the diving around Chichijima is very pleasant, but not spectacular—until the local stars of the show make an appearance. There is a significant population of both spinner and bottlenose dolphins in and around Chichijima, so there is a strong possibility of an underwater encounter with a pod of these wonderful creatures. 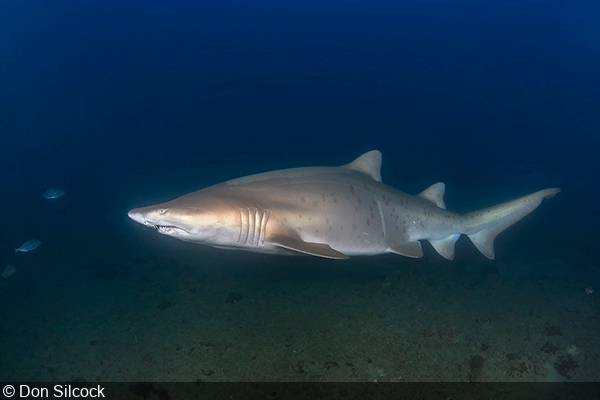 A sand tiger shark cruises by 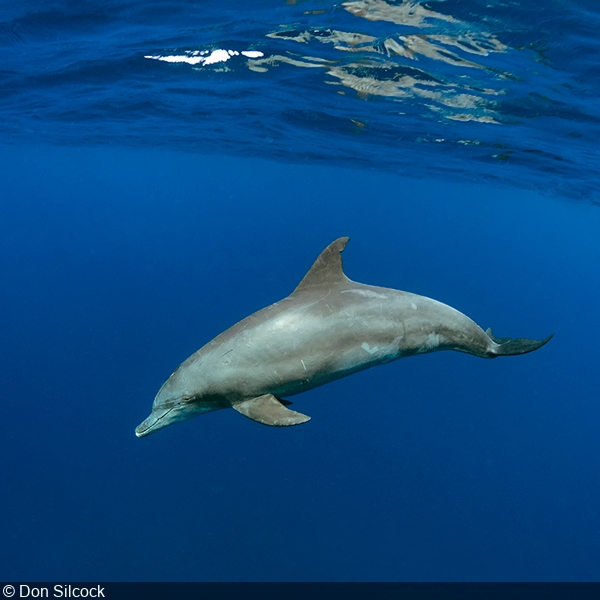 Close encounters of the dolphin kind 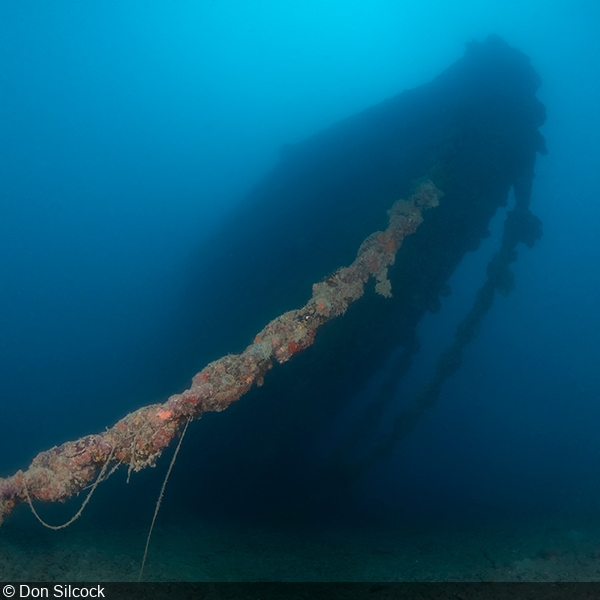 Northern Hemisphere humpback whales visit the Ogasawara Islands between February and April each year. They are a common sight around Chichijima and a major tourist attraction. However, in-water encounters are not allowed as such, with a mandatory exclusion zone of 100 metres (110 yards) around any individual. However, if you are in the water and the whale swims towards you, then the encounter happens on their terms and all is well in the world!

The archipelago also has a resident population of sperm whales, but they are typically only seen in August and September, when the weather is at its best and the seas are calm. And they rarely come in to the coastal waters around either Chichijima or Hahajima. Instead, they prefer the deep waters some six miles off the coast of Tatsumizaki Island, to the southeast of Chichijima. Keep in mind that in-water encounters with the sperm whales are also not allowed and a 50-meter (55-yard) exclusion zone applies. But again, if they do happen to swim towards you…

The general area around the archipelago was known as the “Japan grounds” during the early 19th century when whaling was at its peak. And because Japan was closed to foreigners at that time, the Ogasawara Islands were used as safe harbors to replenish supplies. 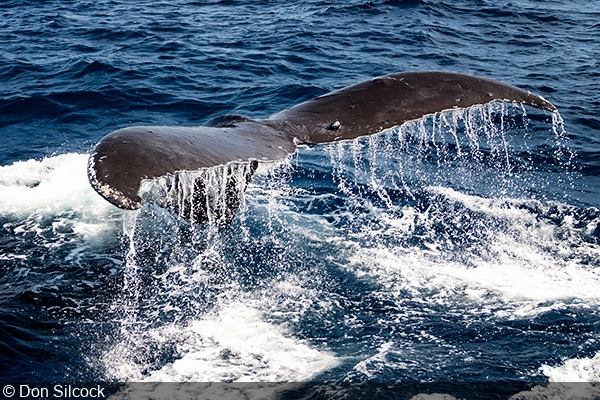 The fluke of a northern humpback 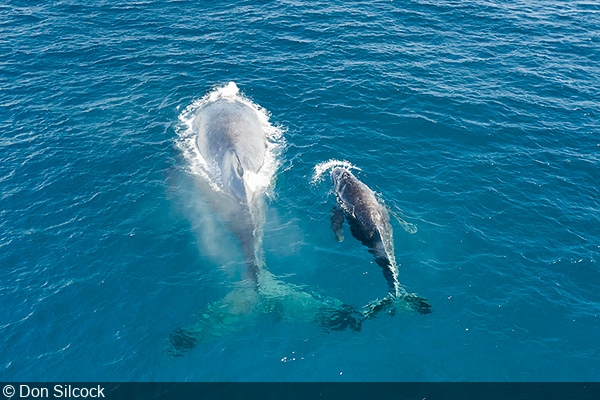 An aerial shot of a northern humpback and her calf 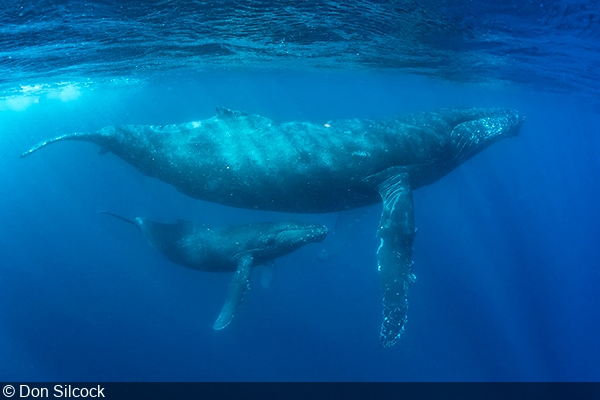 If you’re lucky, the humpbacks will get close enough for a portrait

It’s quite a trek to get to the Ogasawara Islands. It typically takes at least two days each way: one day to get to Tokyo and another 24 hours on the ferry to Chichijima. The diving is decent, but not fantastic, and the whale encounters are somewhat hit and miss, but as an overall experience, it is wonderful. Japan never ceases to amaze, with its incredible culture and history—and possibly the nicest, politest people in the world.

The cities in Japan are truly amazing, but they are a completely different experience to what the small towns and villages offer. The Ogasawara Islands take that even further, as there are simply no big hotels to stay in. Instead, you stay in pensions and guesthouses, which means you are right in the thick of how the locals live, eat and socialize. This is “immersion therapy” at its finest! 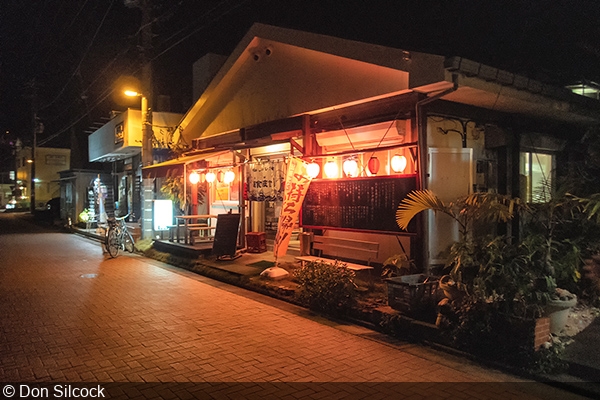 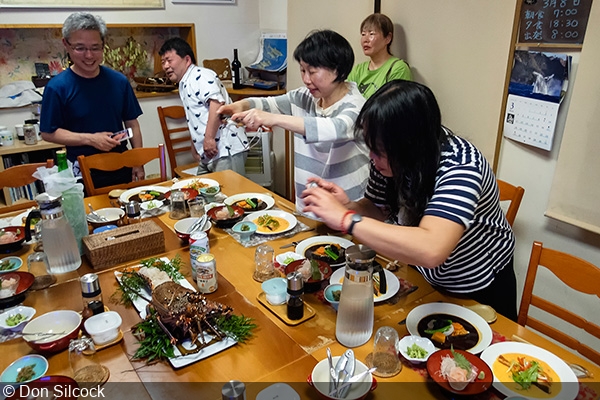 Time for dinner in the guesthouse!