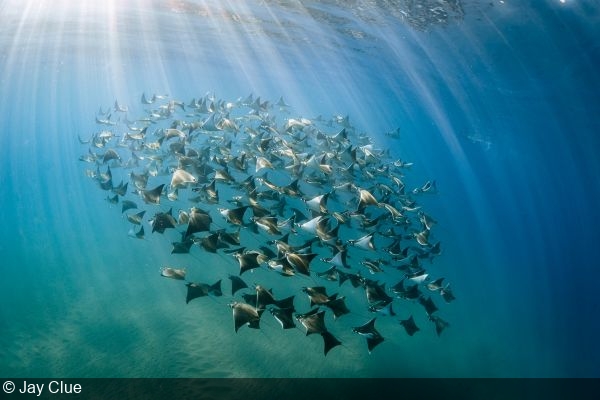 In 1973, the president of Mexico declared the bay of Cabo San Lucas a marine protected area because of its wealth of biodiversity and abundance of life. It was the country’s second MPA, with the first being in Cozumel. Fast forward a few decades later and it would become a UNESCO World Heritage Site. Inside this small marine park sits a mountainous ridge that juts out into the Pacific Ocean protecting the bay from waves, wind, and currents. At the center of this ridge lies one of Cabo San Lucas’ most famous dive sites—Pelican Rock.

Located only a few minutes outside of the Cabo San Lucas marina, Pelican Rock is nestled just between Middle Wall and North Wall. We’re talking a maximum five-minute boat ride. There are a few rock formations at the site that break the surface, but the best for diving is the large pinnacle that is often mistakenly called Pelican Rock, because it looks kind of like a pelican resting. Contrary to popular belief, though, the dive site is actually named for the much smaller rock closer to shore that tends to always have a bunch of pelicans sitting on it. 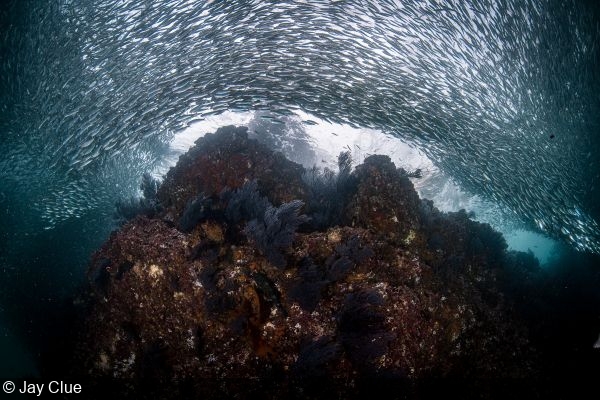 Like most of the dive sites in the bay, it sits on top of a rocky sheer face wall that starts about 330 feet off shore at about 30 feet underwater before stepping down to a plate and then dropping down to over 1,200 feet below the ocean surface. These rocky walls have given the area the nickname “Cabo Canyon.” The large pinnacle at the center of Pelican Rock tends to be a magnet for life, making the dives here always special. But beyond this, for some reason, Pelican Rock also seems to be a magnet for some of the rarer marine life encounters found in the bay of San Lucas. 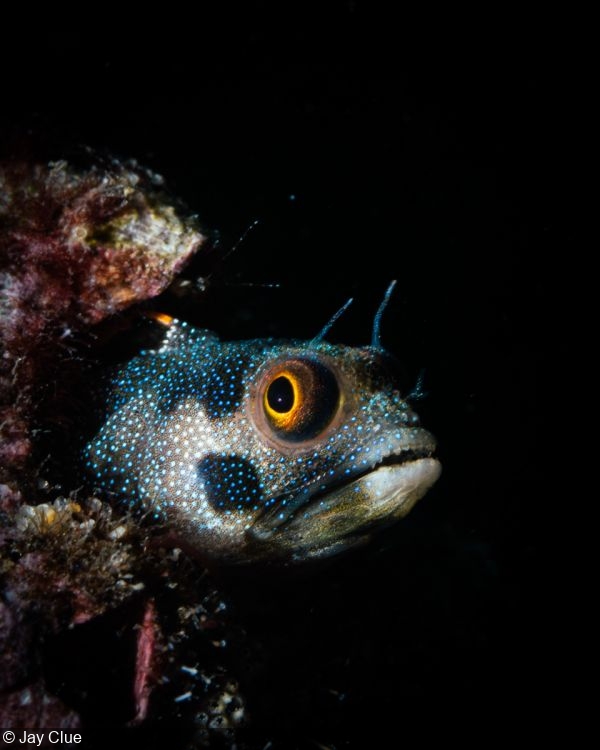 The site can be dived a bunch of different ways, allowing you to visit it multiple times and have completely different dives. The standard starting point is to drop in on the south side of the roped-off area and make your way along the shallow sand to the main pinnacle before heading to the outer plateau and wall. You’ll then turn left and eventually circle back once you reach the small canyon that separates Pelican Rock and North Wall.

In this canyon, at around 65 feet, you’ll find the beginning of one of Cabo’s famous sand falls—imagine a waterfall that is underwater but made of sand cascading down the rocky canyon walls. They’re not always running strong, but when they are, it’s an incredible spectacle of nature only found in a few places in the world. The sand falls run all the way down to around 250-plus feet, so for the tech divers it can be a really awesome dive cruising down them to explore some of the Cabo San Lucas Marine Park’s deeper sites. 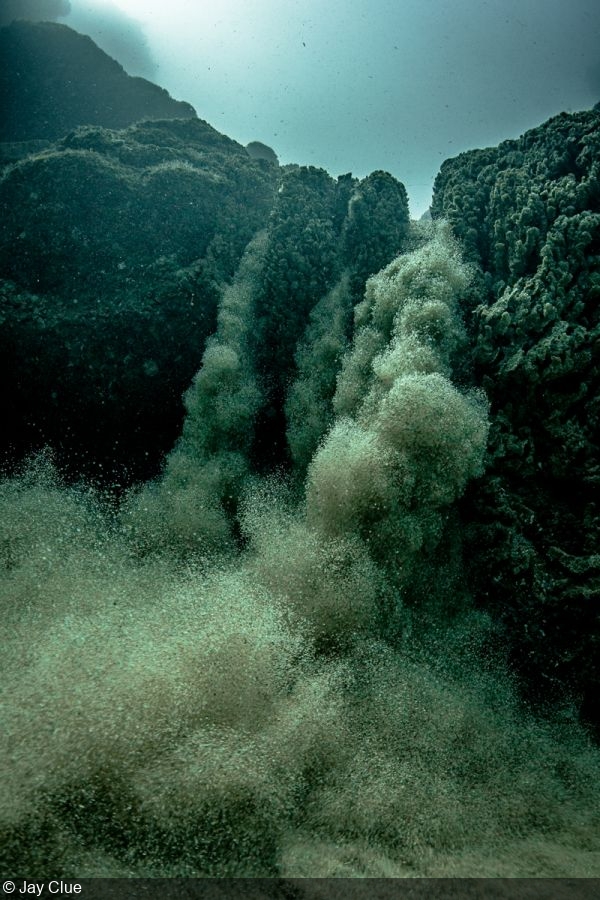 Another option is to drop in on the south side, but instead of heading to the pinnacle follow the sandy slope straight down to a rocky outcropping on the wall at around 100 feet. This little point tends to have a bunch of life around it and is one of the spots we more often see some of the rarer wildlife encounters. For example, two of the three whale shark encounters I’ve had at Pelican Rock took place just off the wall from this point.

From the point, you’ll want to turn left and cruise the outer edge of the wall until you reach the north corner of the plateau. Out here there’s a secret spot that’s off the wall in the blue where you can catch schools of cownose or mobula rays cruising by. If you’re in town during the mobula season—and comfortable in the blue without any visual reference—you should definitely ask your guide to take you out there. 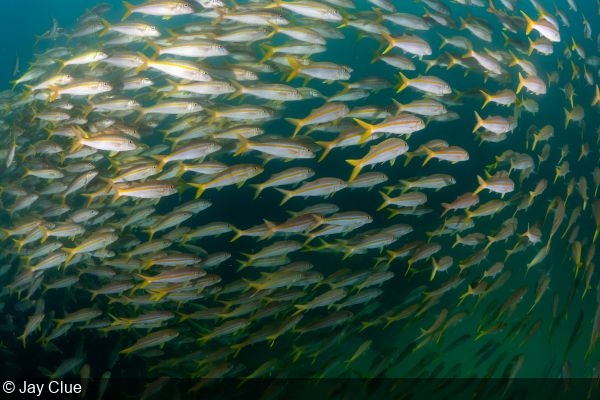 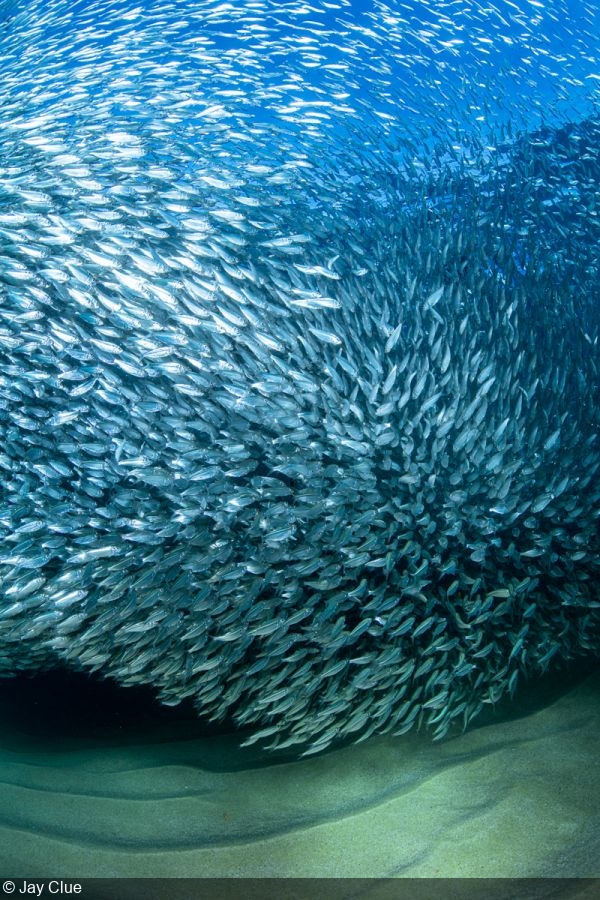 Winter brings large schools of sardines that attract other predators

After either option, you’ll want to cruise back up onto the plateau and look for some of the local inhabitants. As you get closer to the main pinnacle, you’ll usually find big schools of various species of fish—jacks, sergeant majors, goatfish, snapper and even puffers. This area of the site tends to see a great abundance of life. When the water is crystal clear in the autumn, you can also get some great shots of the entire pinnacle from the bottom all the way up till it breaks the surface.

The pinnacle itself is also great for finding nudibranchs, blennies, jeweled eels, octopuses, as well as seahorses and a bunch of other smaller creatures. Most dives will finish on the pinnacle as it’s a perfect spot for killing time on your safety stop searching for macro subjects. 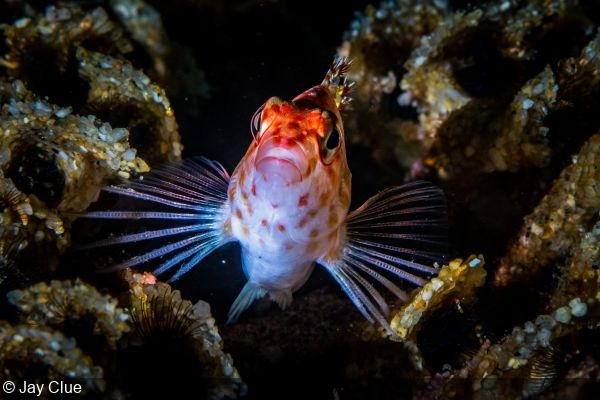 Gear wise, the only thing you’ll need is to decide whether you want to shoot macro or wide angle since the site can cater quite well to both. For macro, any standard setup will work. You won’t really need a diopter since the majority of the macro is decent sized. Usually, when I’m shooting macro here, I leave my big strobes at home and bring the Backscatter Mini Flash and Optical Snoot, as it opens up a world of possibilities to play with. I like that I can just pop off the snoot and clip it to my BCD when I just want a normal strobe shot.

For wide angle, you could go rectilinear, such as the Sony 16–35mm, to have a little more frame-filling options when shooting the smaller life here, but still being able to capture the large schools of fish or reefscapes. However, as most of the marine life here is quite accustomed to divers, most times I’ll use my Sigma 15mm Fisheye since you can get quite close. This also opens up some great potential for close focus wide angle shots. 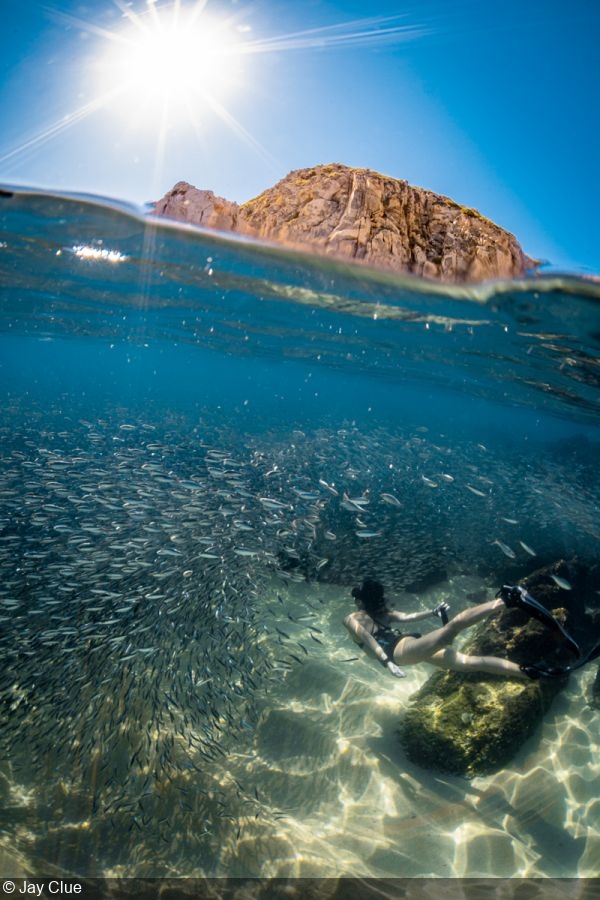 Snorkelers can also enjoy the schools of fish at Pelican Rock

Pelican Rock is one of those spots that is just packed with a wide variety of life. Turtles, whitetip reef sharks, morays, guitar rays, mobula rays, big schools of snapper and jacks, and even the occasional sea lion are spotted regularly. In the autumn and early winter, massive schools of sardines tend to be found in the shallows with a bunch of different animals hunting them. Keep an eye out for the diving cormorants swimming down to pick them off as well as smaller rooster fish. The sand falls are a really unique experience and worth dropping down to check out. During the mobula ray aggregation seasons, schools of rays can be spotted cruising by off the wall as they circle the bay.

On the macro and smaller life side, there are a few species of slugs from nudibranchs to sea robins, as well as blennies, seahorses, frogfish, small eels, hawkfish, tiny puffers, coral crabs, plus a bunch of different juvenile fish hiding in the cracks. Always keep an eye on the blue as you never know what may pass by. While they are definitely rarer, in the past we’ve seen whale sharks, mantas, marlin, and even humpback whales cruising just off the wall. 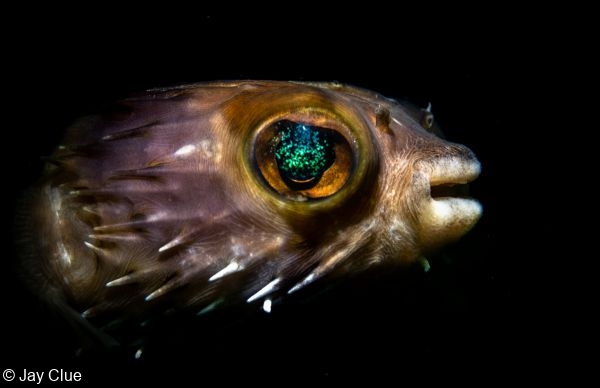 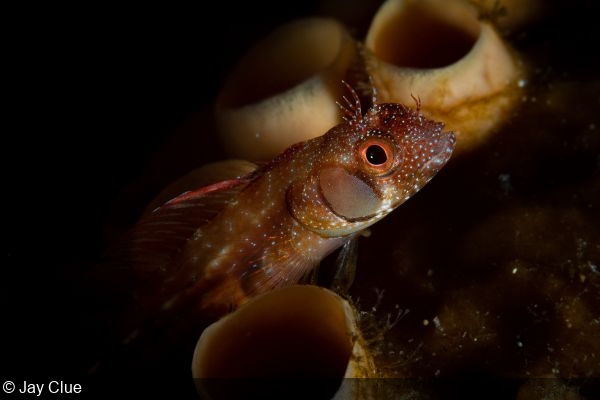 As the potential subjects to shoot at Pelican Rock are so varied, I’d highly recommend hitting it a few times during your trip. I’ve done countless dives at the site and still love visiting it again and again. If I’m shooting macro, I tend to just hang out around the pinnacle or on top of the other plateau around 40 to 50 feet, as there’s usually a bunch of subjects. On the south side of the pinnacle, you can also find an overhang with beautiful bright orange sun polyps.

For wide angle, I tend to run the dive a bit deeper and head out to the wall first, then stop by the sand falls before I circle back to the outside of the plateau to look for the schools of snapper, jacks and sergeant majors. Then I head into the shallows on the inside to shoot reefscapes of the pinnacle. The sandy bottom on the inside gives a nice contrast to the rock and coral on the pinnacle. 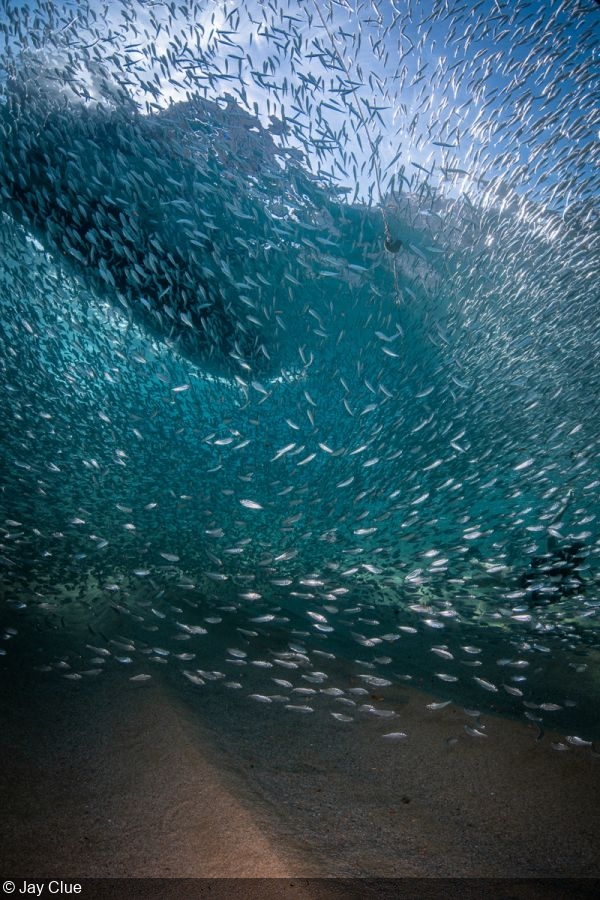 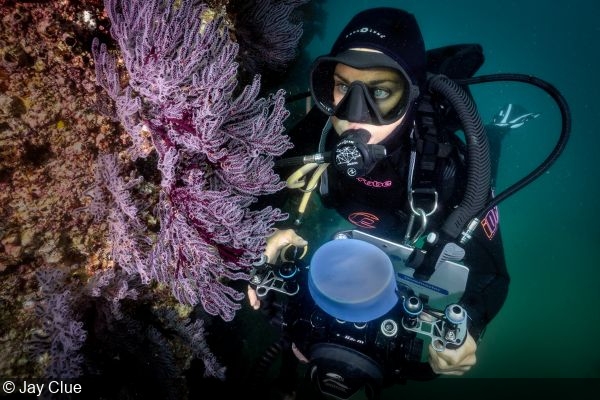 Night dives here are also awesome with lots of different nocturnal creatures coming out, such as hordes of huge sea hares, slipper lobsters, octopuses, and much more. The jacks that tend to hang out at the pinnacle can also be spotted at night dipping quickly into your torch light to hunt alongside the whitetip reef sharks. There can also be a great abundance of bioluminescence at the site in the shallows at differing times in the year.

As Pelican Rock is quite a popular spot for snorkelers and divers, it can get quite busy in the late morning and early afternoon. But if you hit it as the first or last dive of the day, it’s usually pretty quiet. Plus, since the site has a bunch of different ways to dive it, you won’t really see a ton of divers unless you stay in the shallow sandy area. 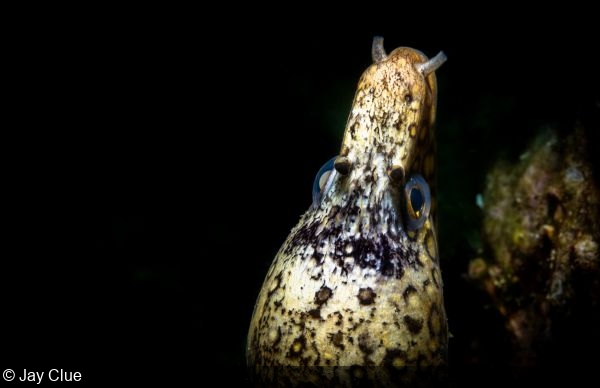 When to Go: Pelican Rock is available to dive all year long and as you move through the different seasons the marine life, water temperatures, and visibility changes. Dive Ninja Expeditions has a great calendar of the marine life of Cabo San Lucas and Baja California Sur that can be downloaded for free to help you plan. The warmest and clearest waters are found from late August into December. The coldest and lowest visibility is in April and May, but the cold nutrient-rich water also brings in lots of different life.

Subjects: Lots of options from macro to wide angle, reefscapes, and the sand falls.

Equipment: Nothing special needed, but it is highly recommended to dive the site at least twice so you can focus on macro one dive and wide angle another.

Who to Dive with: Dive Ninja Expeditions in Cabo San Lucas is a PADI 5 Star IDC center and was recently awarded as the No.1 in North America and Mexico (and No.4 Dive Center in the World) by the 2021 Dive Travel Awards. They work with a maximum of four divers to a guide and offer private guiding services. If you let the guide know what you’re looking to shoot, they’ll help get you to the best spots to find it. 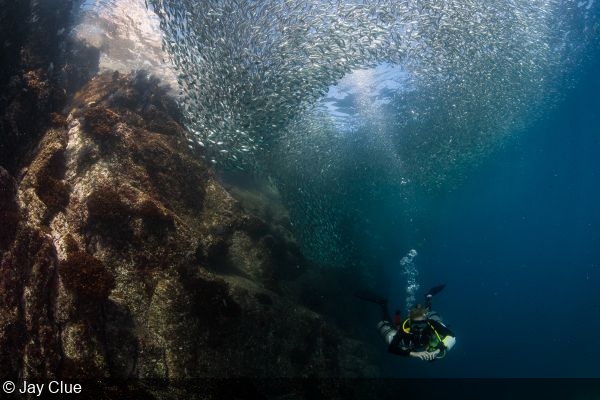 A diver blowing bubbles through a large school of sardines