Diving the Nuclear Fleet at Bikini Atoll with Master Liveaboards
By Brandi Mueller, October 12, 2018 @ 04:00 AM (EST) 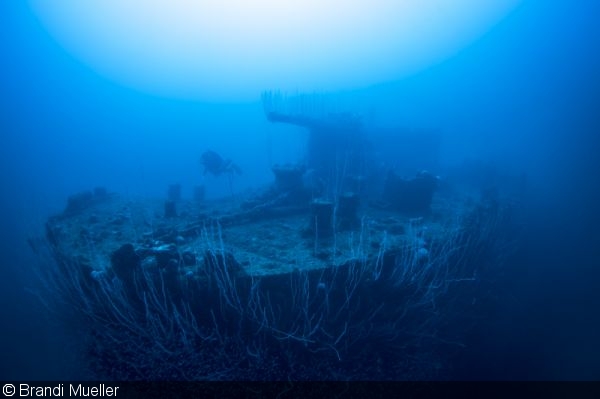 A CCR diver explores the bow of the USS Carlisle. The underside of the bow and gun are forested with whip coral

Descending from the Truk Master down to the wreck of the USS Saratoga, I can hardly contain my excitement. With the excellent visibility, it doesn’t take too long for the shadow of the 888-foot aircraft carrier to form. As the ship’s silhouette sharpens, I’m thinking about the history of the Saratoga, but it’s not her service in the Pacific theater of World War II that is foremost in my mind. Her most memorable purpose came in “retirement”: In 1946, the Saratoga sailed to Bikini Atoll to participate in Operation Crossroads—the first testing of nuclear weapons after the bombing of Nagasaki.

The Saratoga survived the first of two tests (Able) but was sunk after the second (Baker), an underwater blast just 400 yards from the ship. She now rests in the sand at 165 feet, along with three airplanes that were blown off the deck. The depth and remoteness of the wreck made the dive an unfulfilled bucket-list item for decades, but this summer, Master Liveaboards finally made it possible to visit this small coral island atoll in the middle of the Pacific Ocean. Underwater photographers with the appropriate technical diving credentials can now access the Saratoga along with a number of other iconic wrecks. 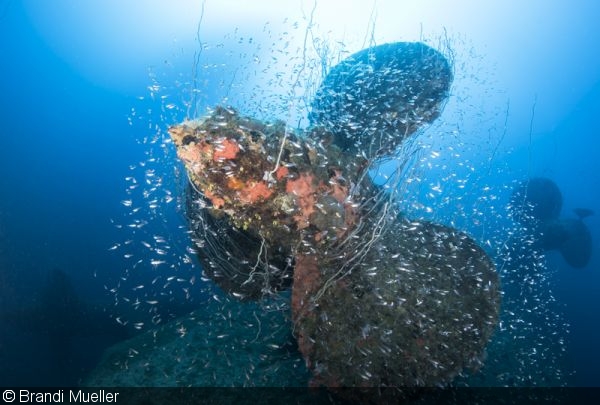 A coral and sponge encrusted propeller of the Japanese battleship Nagato, which was sunk by the second nuclear test at Bikini Atoll in 1946 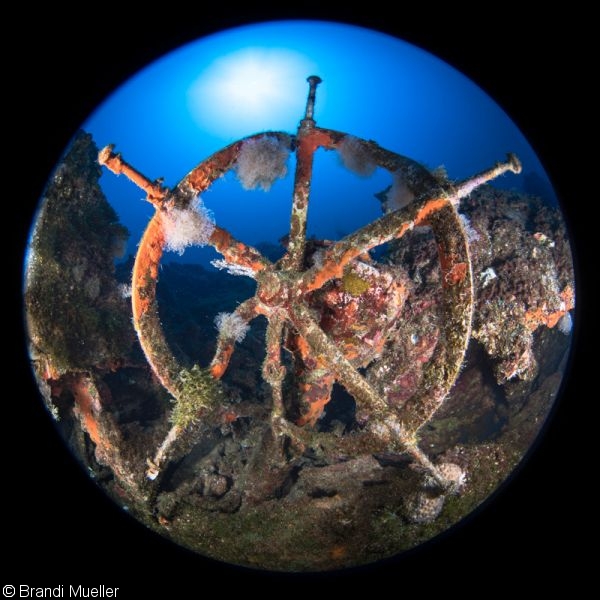 Following the conclusion of WWII, the U.S. wanted to determine the impact of nuclear weapons on warships. The military chose Bikini Atoll, one of 29 coral atolls in the Republic of the Marshall Islands, because it was relatively isolated and very sparsely populated.

In total, 95 vessels—aircraft carriers, destroyers, cruisers, submarines, and even one German and two surrendered Japanese ships—were aligned in a bullseye pattern. Each ship contained scientific instruments to capture data from the blast. Utilizing “Fat Man” plutonium implosion-type nuclear weapons of the kind dropped on Nagasaki, the pair of tests left devastation in their wake far beyond the shipwrecks. 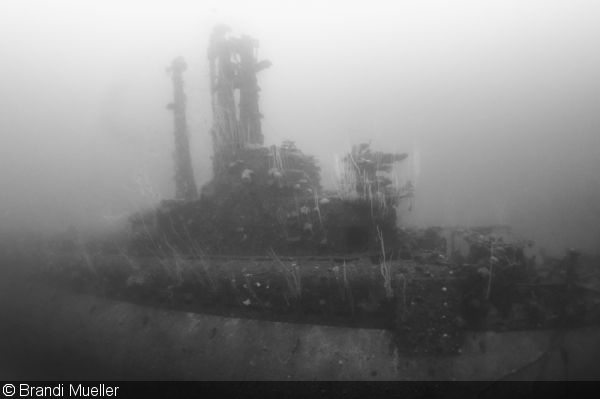 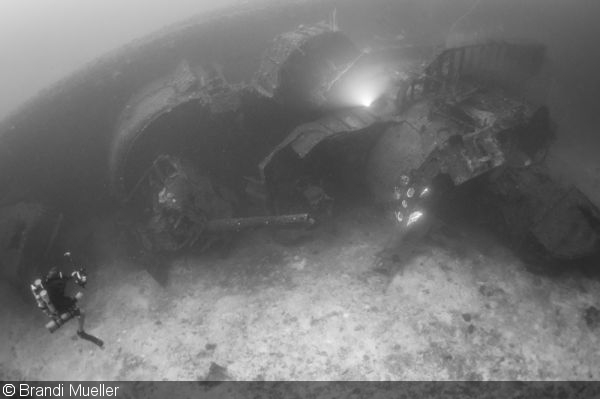 The USS Anderson destroyer is an ideal wreck to set up off-camera lighting. Captain Martin experiments with different lighting inside the wheelhouse and on several of the ship’s many guns

Despite promises, Bikini’s residents weren’t able to return to the islands due to high levels of radiation. The U.S. subsequently decided to resume nuclear testing at the atoll in 1954, with a further 21 detonations conducted over four years. Some attempts were made to resettle the islanders in the 1970s, but research determined radiation levels remained dangerously high, and the population was once again relocated. The U.S. was ultimately forced to provide compensation to local people who suffered radiation injuries as well as undertake a cleanup program.

Today, fewer than 10 people spend short stints on the island doing maintenance work and several employees from the U.S. Department of Energy continue to monitor radiation levels. It has been determined that short stays at Bikini Atoll and diving the shipwrecks expose visitors to such a small amount of radiation that it is essentially negligible. 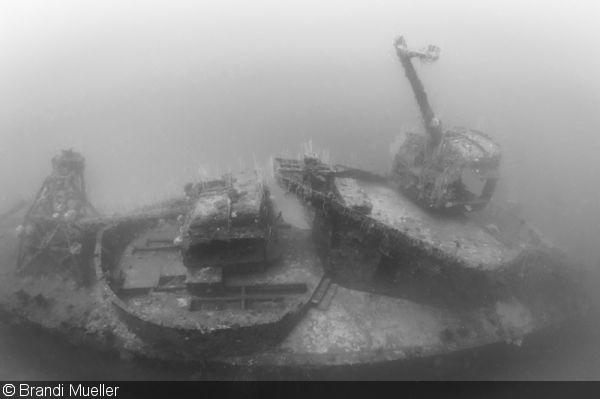 Some of the guns on the USS Lamson destroyer. One of the most intact, this ship is both littered with war surplus and bristling with marine life

In 2010, the United Nations designated the area as a UNESCO World Heritage Site for its role in symbolizing the dawn of the Atomic Age. To be able to see firsthand this isolated, historically significant place that’s so far off the beaten path is the trip of a lifetime for a tech diver and photographer.

Wreck divers can visit 10 ships and submarines. The USS Saratoga generally steals the show because of how large and interesting the contents of the ship are. Another favorite is the Japanese battleship Nagato: The wreck lies upside down, but its massive pagoda-like superstructure allows for some penetration under the ship with massive guns sticking out from underneath the turtled vessel. You can swim past the bridge where the order was given for the raid on Pearl Harbor. 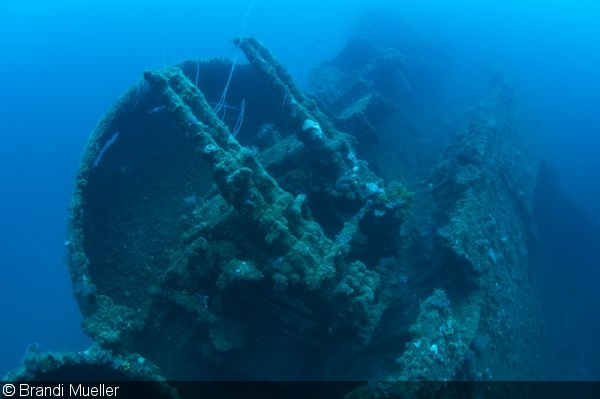 The stern of the USS Saratoga is collapsing in on itself, causing the sides of the ship to angle upward, like these platforms with guns 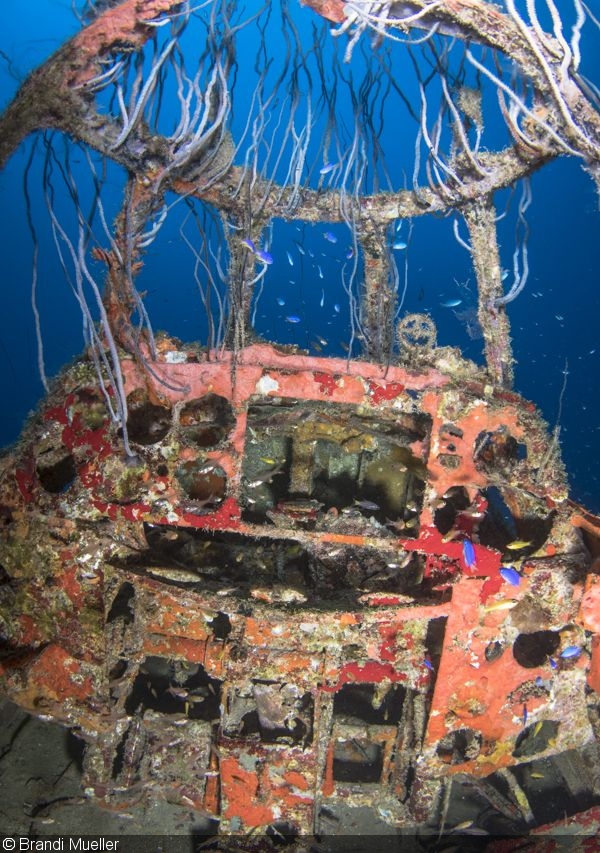 Sitting in the sand off the stern of the Saratoga, the cockpit of this Helldiver is still very much intact—even the gunsight is intact in the right corner window 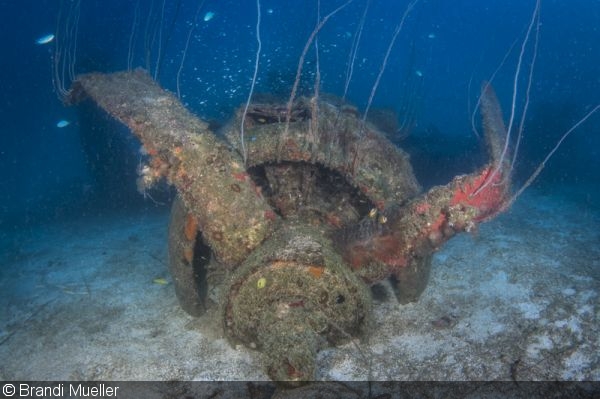 The USS Lamson and USS Anderson were both destroyers and their robust construction has kept them mostly intact—even after being sunk by a nuclear bomb. The Anderson is on its side, but it’s largely intact with guns and weaponry everywhere. The props at the stern are encrusted with coral and sponges that came to life with color when my camera strobes fired. The Lamson has plenty of photogenic features, including a massive torpedo launcher with torpedoes loaded.

Maybe it’s because she spent so much time working under the surface, but the submarine USS Apogon survived almost entirely intact and is one of the richest in terms of marine life, including schools of fish and plenty of sharks. Meanwhile, the USS Carlisle looks as if someone took a bathtub toy, shook it, and placed it on the bottom of the ocean: The bow with a large mounted gun is intact, but the deck of the ship is strewn with broken objects. 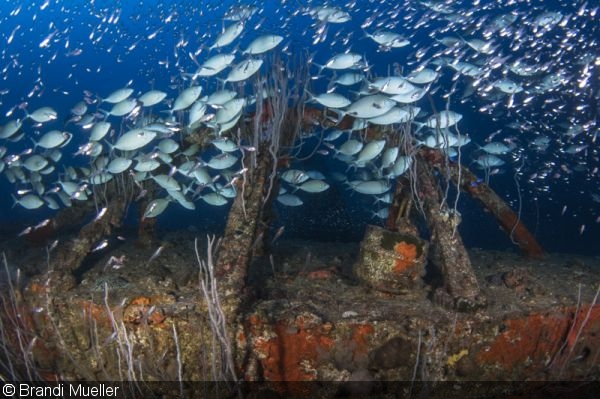 Fish, coral, and other marine life have repopulated the warships, as here on the USS Anderson 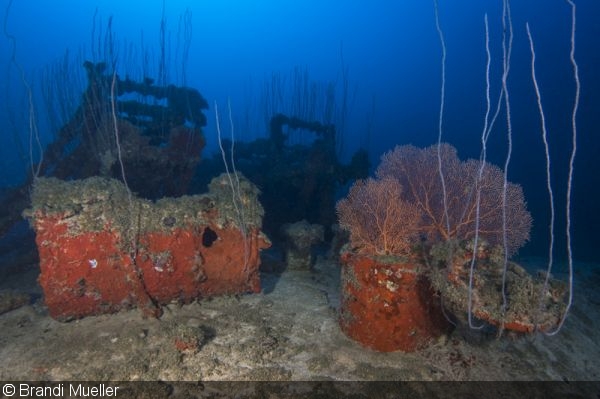 Marine life on the stern of the USS Lamson 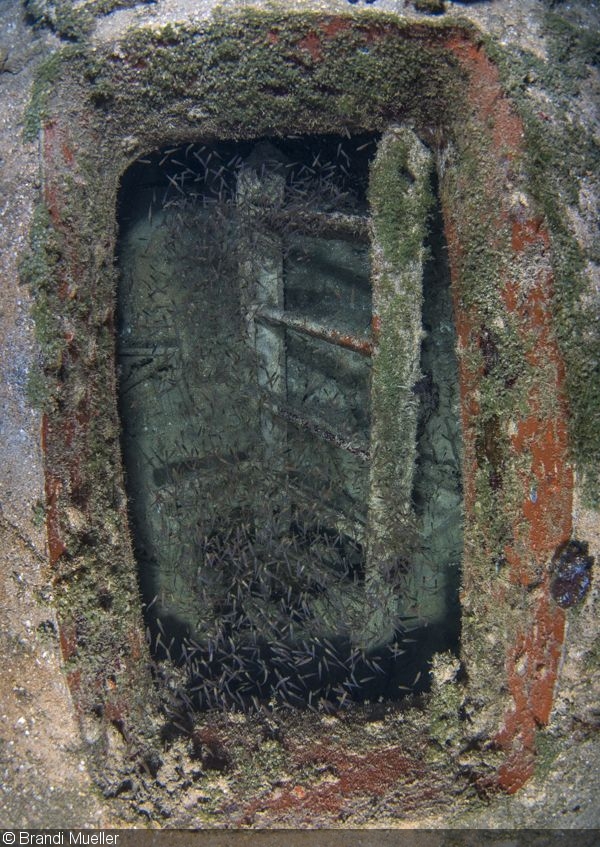 A ladder leading to an interior space on the USS Lamson

The diving is rich historically and photographically, but the depth of the wrecks makes it a wise choice to take some extra time to off-gas. The crew arranged for us to visit two of the islands, which were truly worthy of a postcard: Vibrant green palm trees peppered a white sand beach lapped gently by multitonal blue water.

One of the Bikini Island employees picked us up in a truck and gave us a tour. Along the way, I spotted parts of a broken plane, abandoned flip flops, and plastic remnants of consumerism washed up on the beach far away from their source. At one end of the small spit of land, we could see the entire lagoon spanning for miles.

We stopped by a bunker built for the nuclear tests, which is now mostly concealed by vines and foliage. Downtown Bikini Atoll is more of a ghost town, but it includes one particularly important institution for travelers—a good bar, though no drinks are served here anymore unless you bring you own. And so, we took in this surreal nuclear atoll from the Bikini Bar while enjoying some delicious BBQ prepared by the Master Crew as the sun set.

The Truk Master is fully equipped for tech diving. It’s fitted with steel and aluminum tanks, manifold twinsets, right-hand and left-hand valves for sidemount divers, rebreather cylinders, and plenty of stage bottles. The crew is very experienced in dealing with tech divers and is happy to blend your gas mix exactly as desired—including helium mixes. There are even scooters available to rent, which makes seeing these massive ships easier in the limited time at depth.

Bikini trips have a slightly different schedule than most other Master Liveaboard itineraries. Dives average about 150 feet (and can be as deep as 170 feet), so there are just two dives a day. Boat capacity for guests is about 40 percent less both to ensure safety and leave plenty of room for tech diving gear—and cameras, of course. Everyone on my trip opted for double tanks or rebreathers. Carrying so much extra gear can be difficult and the crew always seemed to magically appear to make it as easy as possible to get in the water. 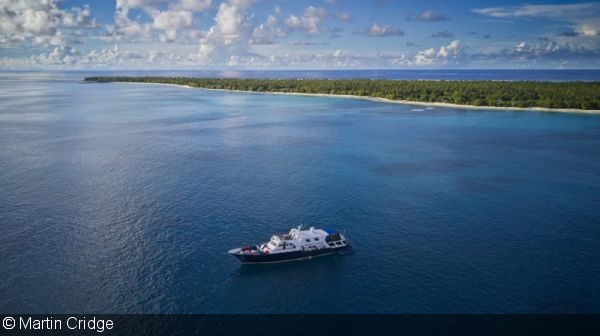 The Truk Master with Bikini Island in the background 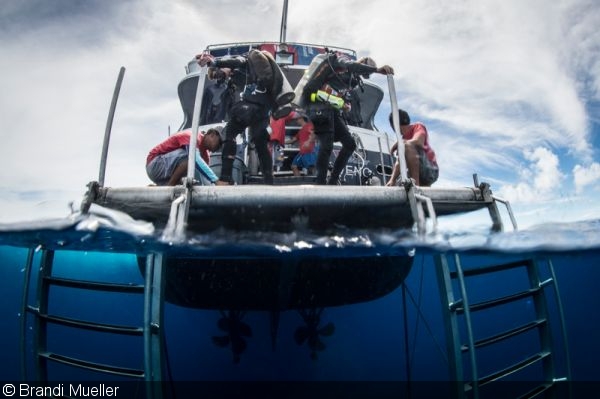 In spite of the advanced diving and ultra-remote locale, you will still see the little luxuries of the Master Liveaboard fleet shine through. With on-demand laundry service, there’s no need to worry about stinky swimsuits on this expedition. And the satellite Internet makes it possible to immediately share those sensational snaps of historic WWII wrecks with your social media followers.

The eerie desolation in this far-flung corner of the world speaks to the insidious legacy of this dark period in history. Yet, life has taken hold here all the same, and as elsewhere in the patches of ocean where humanity’s greatest tragedies are submerged, we have the privilege of bringing special images to the surface that remind us of the magnitude of what happened at Bikini Atoll more than seven decades ago. 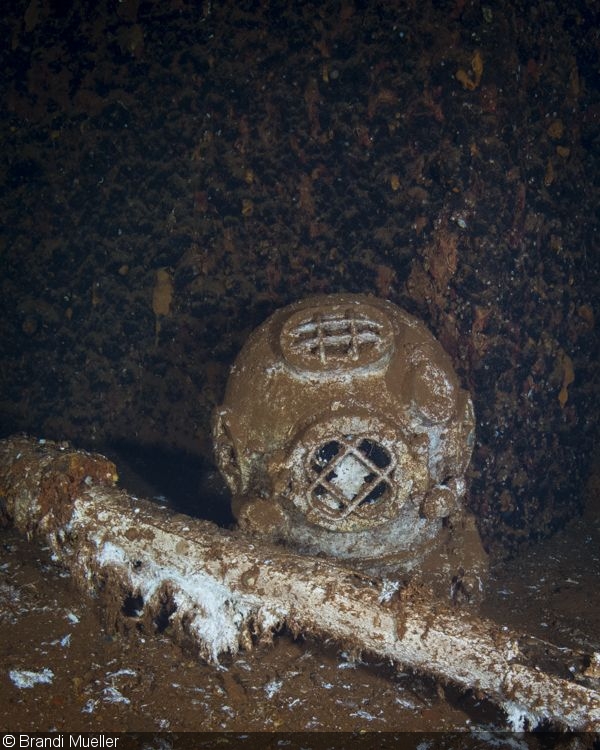 A U.S. Navy Mark V diving helmet is one of the highlights inside the USS Saratoga

Planning Your Trip to Bikini Atoll

How to Get There: Trips depart from Majuro (capital of the Marshall Islands) or Kwajalein Atoll. United Airlines has three flights a week from Honolulu or Guam. The crossing to Bikini Atoll takes around 27 hours.

When to Go: May to October.

Who to Dive With: The Truk Master is currently the only operation running consistent liveaboard trips to Bikini Atoll.

Temperature: As the water temperature is around 83°F (28°C), wetsuits are still recommended for wreck penetration.

Currency: US Dollar. Majuro has limited ATMs, but these often are not working. Ebeye, where the ship departs from, has none. The liveaboard accepts cash in several major currencies as well as credit card payments with a fee.

Visa: Nationals of most countries can get a free 90-day tourist visa on arrival.

Special Requirements: The Truk Master’s Bikini Atoll itinerary requires all divers to be tech-certified to the equivalent of PADI Tec 50 or higher. There is no medical care available in Bikini and only limited care in Majuro, with no hyperbaric facilities. Divers need to keep in mind the remoteness of the location and the distance they will be from medical care when planning and carrying out dives. Diving conservatively is highly recommended. 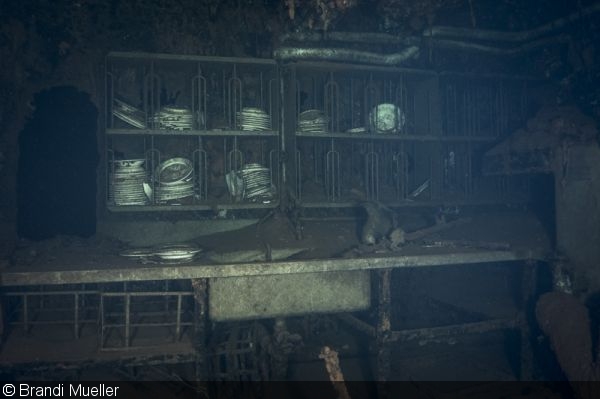 A nerve-wracking penetration into the USS Saratoga reveals the scullery, complete with crockery