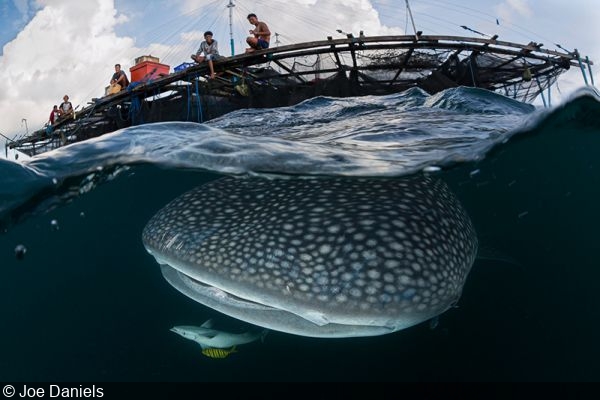 A group of 31 islands scattered across the Celebes Sea, the Derawan archipelago is a lesser-known gem of the Indonesian province of East Kalimantan. The islands stretch 100 miles along the edge of the continental shelf with the Berau Delta to the west and the deep water of the straits of Makassar to the east. This culminates in very productive waters with a number of unique ecosystems, marine megafauna encounters, and stunning seascapes.

Some 460 different species of corals have been found here, ranking the area behind only Raja Ampat and the Solomon Islands, and with more than 870 species of fish, ranging from tiny pygmy seahorses to giant whale sharks, it’s a truly tantalizing destination for any underwater photographer. 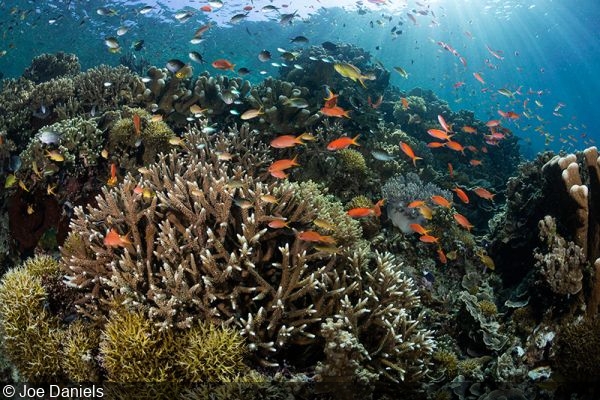 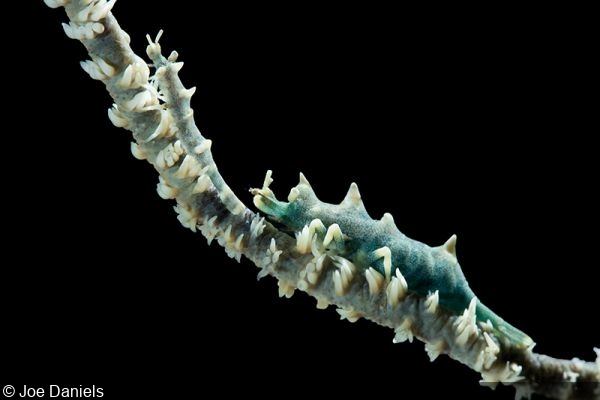 The perfect base to explore the area is the tiny Pulau Derawan, one of only two inhabited islands in the archipelago, the other being Maratua. Derawan is beautiful, with brightly colored rustic houses and one sand “road,” but not a car in sight. You really get to immerse yourself in Indonesian island life here.

The vibrant colors are not restricted to the land. Sink beneath the waves and you are greeted with a myriad unusual species and habitats. Lush seagrass beds surround the island before sloping off into striking coral bommies and critter-packed rubble slopes. The area is also home to one of the largest green turtle populations in the world. It’s not uncommon to see huge mature turtles feasting on the seagrass beneath the jetties and water bungalows that protrude from the island. 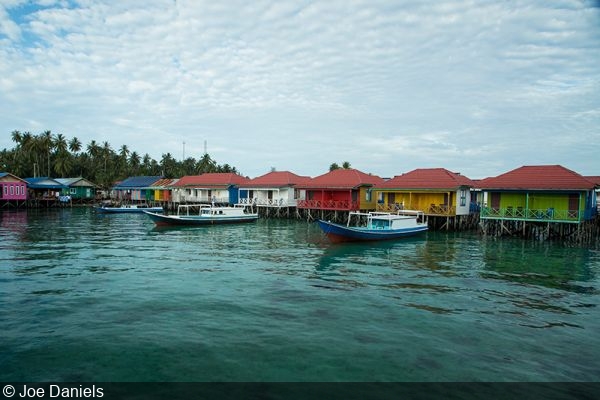 The abundance of turtles wasn’t always the case, however, as their eggs were relentlessly harvested for human consumption, which led to a population decline of over 90 percent. Egg collection was reduced drastically in the year 2000 when the Turtle Foundation and World Wide Fund for Nature set up a conservation program employing full-time local rangers and building two permanent ranger stations on important nesting sites. With this new infrastructure, nests are continuously monitored, resulting in full protection for more than half of the nests and giving over seven million hatchlings a better start at life.

An hour’s boat ride to the east lies one the archipelago’s hidden gems, Kakaban Island’s Jellyfish Lake, which has to be one of the most bizarre and beautiful places I have ever visited. At some point in the island’s history, the seabed was uplifted, forming a marine lake completely cut off from the surrounding ocean. Over time, rain has diluted the salt water, with marine life evolving separately in the brackish water to create a truly unique ecosystem.

Arriving at Kakaban Island, you’re greeted by a tall ironwood jetty extending out of the dense forest over shallow reef and abruptly ending where the reef drops off into the deep blue. On a low tide, it is quite a climb out of the boat. To visit the lake, there is an entry fee of 20,000 rupiah (just over a dollar), paid at a makeshift kiosk. It’s a short hike up and over the island’s wall through lush forest, treading carefully on the rickety wooden steps over jagged limestone rocks to the vast lake. The island covers three square miles, and the lake makes up almost two-thirds of this, so there is plenty to explore. 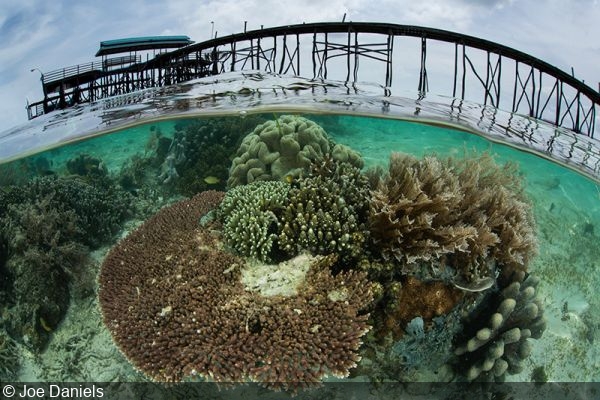 Only 55 feet at its deepest point, the mangrove-fringed lake hosts thousands of jellyfish that are completely harmless to humans—much like the inhabitants of Palau’s famous lake of the same name. Four different species have evolved here: the moon jellyfish, Aurelia aurita; a tiny stingless box jellyfish called Tripedalia cystophora; the upside down jellyfish, Cassiopea ornata; and Mastigias papua, or spotted jellyfish, which is the most common. The spotted jelly—which has lost its spots—hosts zooxanthellae, a unicellular organism capable of photosynthesis, in a similar relationship to that enjoyed by most hard corals. Having no natural predators, these lake jellies have evolved to no longer need their venom as self-defense.

Eight species of fish also dwell in this biological melting pot, along with sea cucumbers, flat worms, crabs, snakes, and clams. The margins of the lake are bound by dense mangroves which have been colonized by gaudily colored sponges that almost seem to drip off the roots like brightly colored icicles. This unique place is like no other, one of nature’s true oddities. It is quite literally another world. 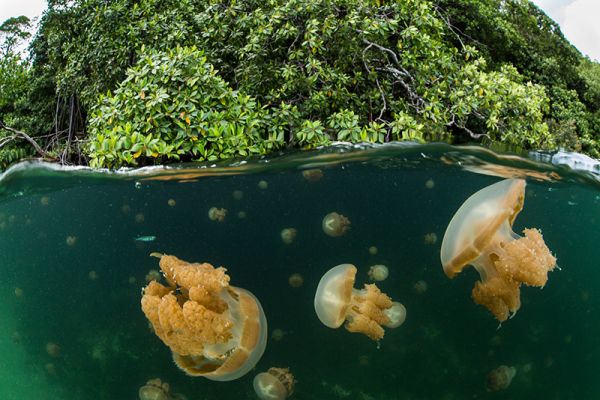 Jellyfish Lake on Kakaban Island is like exploring another world 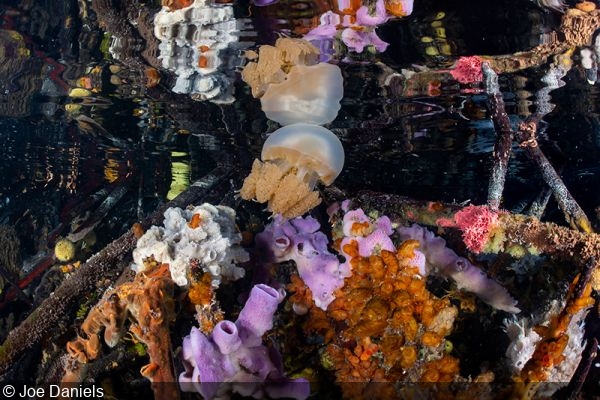 Whale (Shark) of a Time

Each morning, we wake early with the first call to prayer at 5am. With the mosque’s PA system blaring out, we quietly leave Pulau Derawan, our tiny local speedboat skipping over the light surface chop to a cluster of twinkling lights in the distance. These lights are from the bagans—mobile fishing platforms—that work in a sheltered area 20 minutes south of the island. The fishermen that work the pagans catch mainly small baitfish (ikan puri) for drying and selling. Although the bagans themselves are a fascinating sight, it’s what they attract that we are really interested in—whale sharks.

Every night, the fishermen drop large nets and use bright lights to attract their targeted catch. This, in turn, draws in the ocean leviathans. Once the nets are hauled up, the fishermen sort through their catch, discarding anything they can’t sell over the side. This is what the sharks are here to take advantage of. 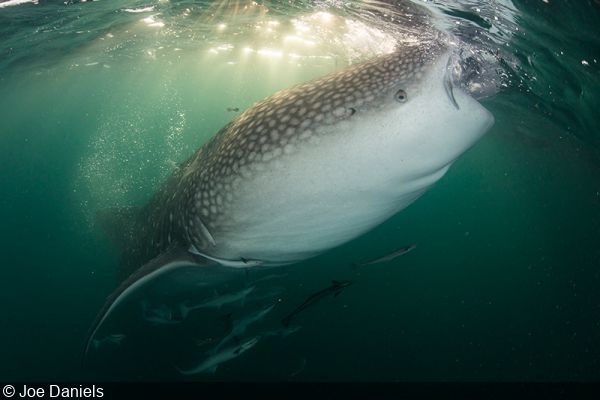 An ocean giant feeding beneath the early morning sun

We usually time our arrival with the lifting of the nets, just as the sun is rising. Jumping into the near pitch-black water with one or usually more 30-foot-long whale sharks definitely gets your heart rate going at that time of the morning! The encounters are incredible and typically last as long as two hours. The sharks are very placid and completely unconcerned with our presence in the water. Only when there are three or more individuals do the sharks seem to be a bit more lively—maybe because of the competition for the food. During these interactions, the sharks are fed with very small amounts of discarded fish. It’s a controversial topic that divides opinion throughout diving and conservation communities.

Whale shark tourism is fairly new in this area. It was only in 2014 when the platforms started operating close to Derawan and seeing the sharks on a regular basis. Talisayan, a two-hour boat ride from Derawan, has a similar story, and this is where the majority of the bagans are located in the latter months of the year. Over the last few years, word has slowly spread of these encounters, with more-adventurous tourists traveling to Derawan just to see these gentle giants. 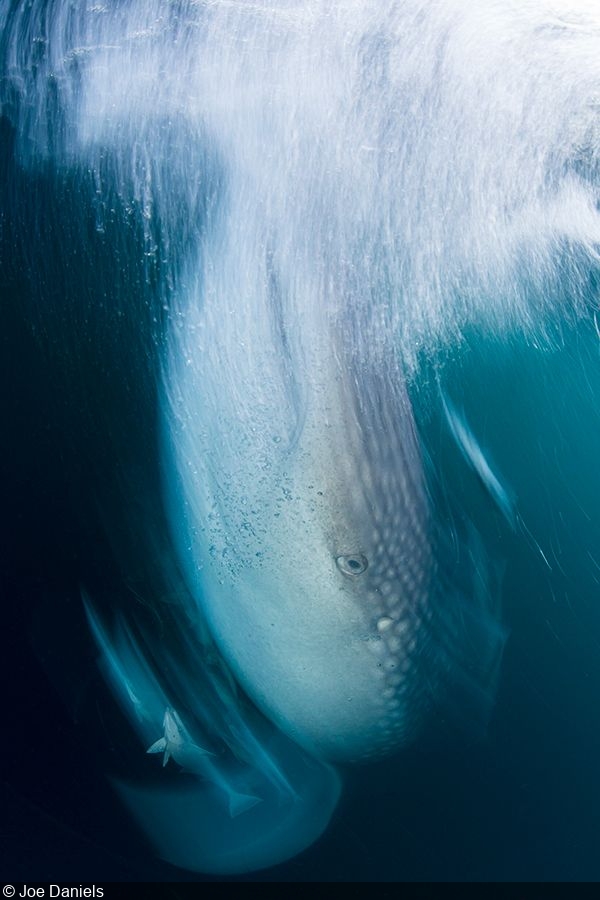 Although even the smallest whale shark we encounter is around 13 feet long, they can still sneak up on you if you are not paying attention! 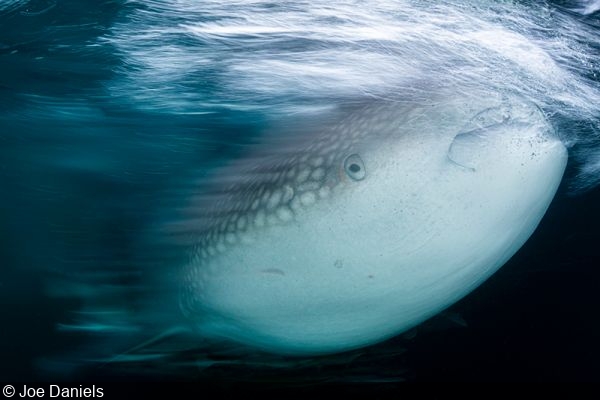 It is possible to observe this behavior in other parts of the Coral Triangle, with new locations popping up in Gorontalo, Sulawesi and West Papua’s Triton Bay. Oslob in the Philippines, another destination with similar circumstances, has become a major tourist attraction and has received a lot of negative press due to the high numbers of people that visit the site.

However, tourism around Derawan is relatively small scale and encounters are a much more relaxed affair. Most mornings, it is just my wife and me out there. The few dive resorts on Derawan work in collaboration with the local village on the island to run these trips. Our boat is hired from Pak Ean, the local whale shark whisperer, who is in contact with many of the fishermen on the bagans, so knows exactly where the sharks are.

Allowing these trips to just be run by the local people ensures that they benefit directly from these sharks hanging around their bagans. Included in the price is money that goes to the fishermen for their fish. The area has seen the effects of foreign boats coming in and finning large predatory sharks, so making the whale sharks economically valuable gives them greater protection. 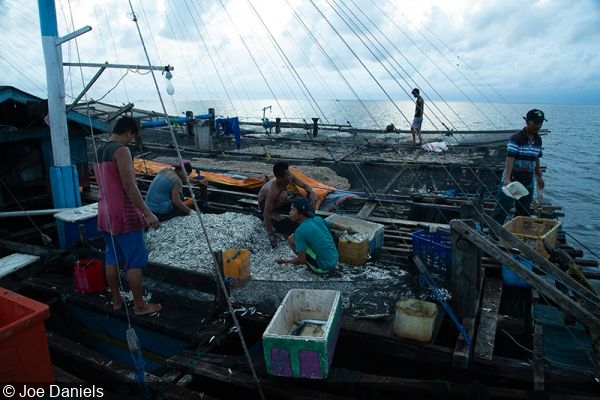 The practice of feeding whale sharks—or feeding any marine life—is sometimes deemed to be detrimental to the animal and their ecosystem. Feeding may change their behavior and create an imbalance that no longer sees them fulfilling their role in the food chain. It’s possible that this culminates in health problems and altered migration patterns.

In order to minimize these negative impacts, various organizations and NGOs such as Marine Affairs and Fisheries, Whale Shark Indonesia and WWF Indonesia have created a strict code of conduct and a management plan to create a sustainable, low-impact tourism model for the area.

Although this is not a perfect scenario, while the fisherman are still making a living catching fish, the whale sharks are going to be attracted to the bagans, whether the tourists are there or not. Giving these sharks a value, generating income for local people month after month and year after year, gives the community a much higher incentive to protect these amazing animals. 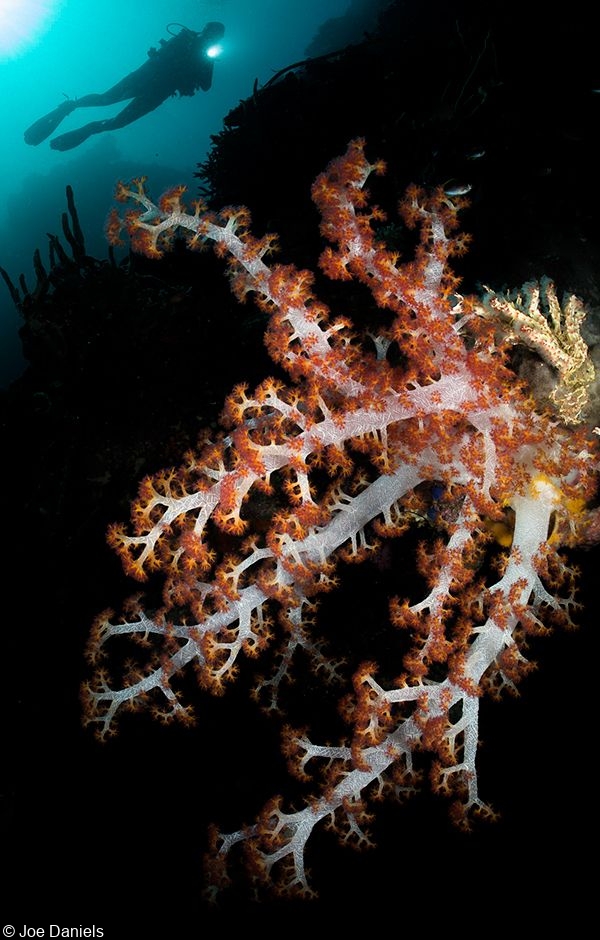 During my time exploring this magical archipelago, I am captivated by what makes it so unique. The sheer walls cloaked in brightly colored Dendronephthya soft corals and ancient gorgonian sea fans, often with minuscule pygmy seahorses hidden between their polyps. Encounters with swirling schools of barracuda and passes from hammerhead sharks. Turtle cleaning stations serving more than 20 of these ancient marine reptiles at any one time. There is even a resident population of manta rays that dances around Sangalaki Island throughout the year. All of this would make many an underwater photographer’s dreams come true, but this hidden gem of an archipelago has so much more to offer. I will definitely be back. 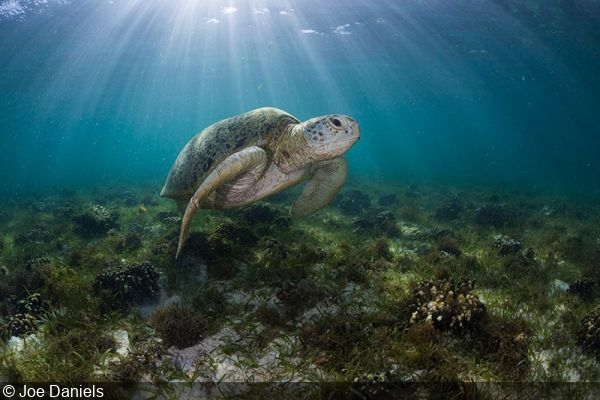 As the tide rises, huge green turtles make their way onto the shallow seagrass beds to feed

For more of Joe’s amazing dive travel images, check out his website, www.jldaniels.co.uk. Find out more about Joe is DPG’s Photographer of the Week article.