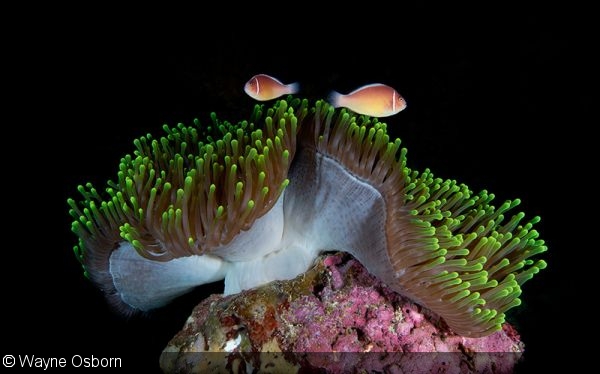 My wife, Pam, and I are regular travelers to remote corners of the world and are acutely conscious that we lug in camera gear that can be worth many multiples of the annual local wage. As such, it’s an important consideration for us that our travel leaves a positive legacy for the local economy and environment—not just producing souvenir snaps for the family back home.

That goal is very easily accomplished at Wakatobi Dive Resort. A crown jewel of diving in the world’s marine “Garden of Eden,” it has an extraordinary history of enlightened social and environmental conscience. At the time these words are published, we have just returned from our fourth visit to Wakatobi and I have now logged 210 dives at this enchanting location.

We first heard about Wakatobi by word of mouth when in Raja Ampat several years ago. Well-travelled divers spoke about it in such revered tones it immediately went on our must-do list. Four visits and more than two hundred dives later, the promise and allure has not dimmed. 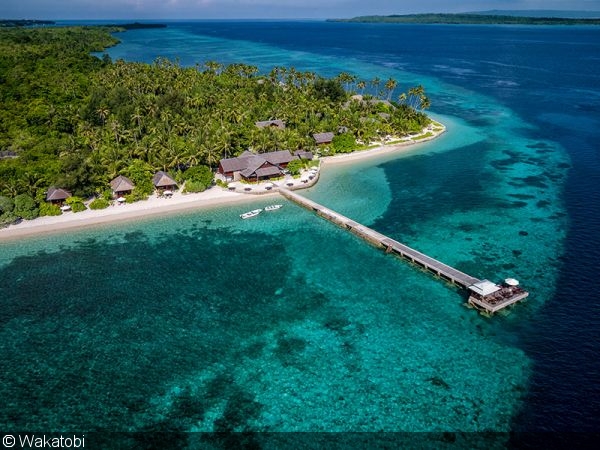 Wakatobi's extensive coral reefs offer a lush array of reef, wall and pinnacle diving that showcase the unparalleled marine biodiversity of this region. It is humbling to drift past huge gorgonia fans that may be a hundred years in the making. Complex sponge colonies and soft corals festoon the reef walls with audacious splashes of vibrant color. As ever, the most complex decision for each dive is whether to shoot wide angle or macro. There is never a shortage of photographic subjects. 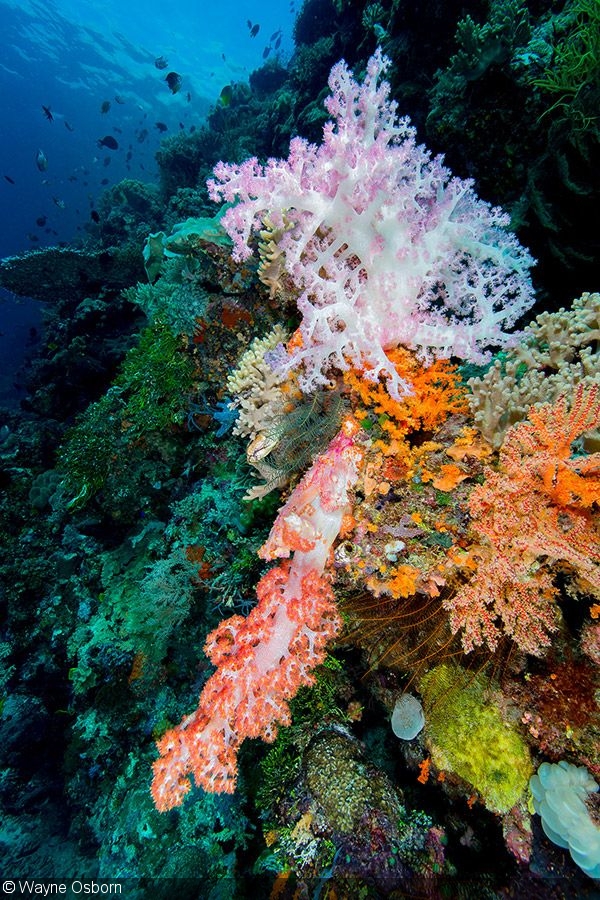 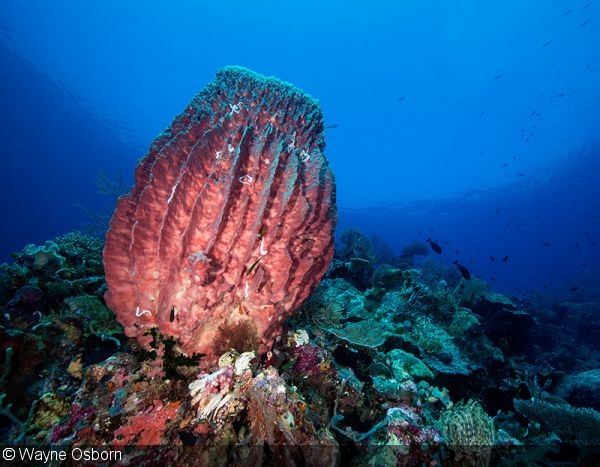 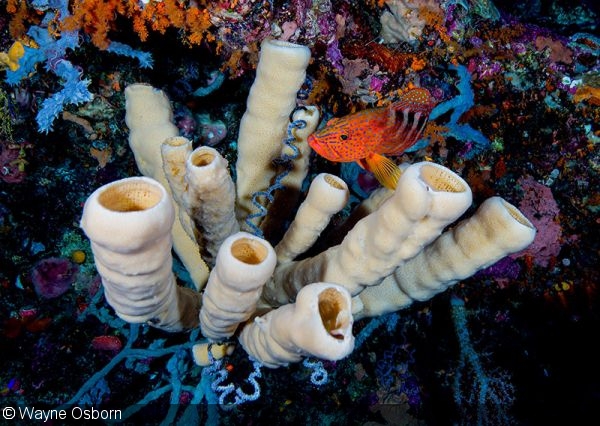 A saddle grouper lurks in a tube sponge colony

According to the founder of the Wakatobi Dive Resort, Lorenz Mäder, they worked in conjunction with local leaders and village elders to establish the “Collaborative Reef Conservation Program.” At the core of Wakatobi’s raison d’être, this economic and environmental initiative was designed to motivate the people living in the Wakatobi region to take an active role in protecting their marine ecosystem.

As a result, the original four miles of reef originally established as a pilot no-take fishing zone in 1997 has been extended to more than 12 miles of reef today. The Wakatobi Marine Reserve in Southeast Sulawesi was later established and encompasses these privately sponsored marine sanctuaries. 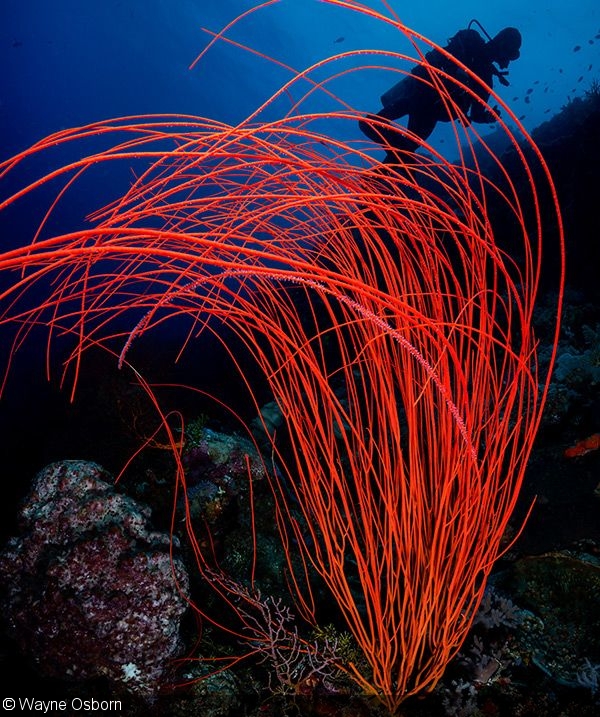 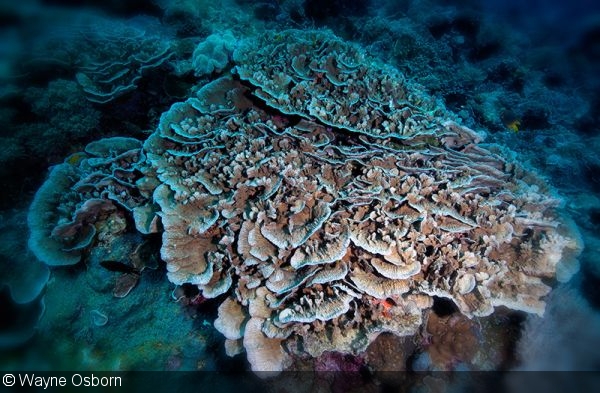 This innovation in pioneering conservation work paid off and in 2012 the Wakatobi Marine Park was designated as a UNESCO World Biosphere Reserve, recognized as one of the most biodiverse marine ecosystems on Earth.

The economics work hand in glove with protection of the fragile reef environment. Twenty local villages receive a monthly “reef lease” payment. This incentivizes self-management and protection of the best reef structures within the marine park. Consistently keeping to this commitment has earned the resort the broad trust of the village elders and island leaders. The return of species to the protected areas has actually improved the fishing bordering these regions. With previously destructive fishing practices put aside, it is a win-win for everyone. 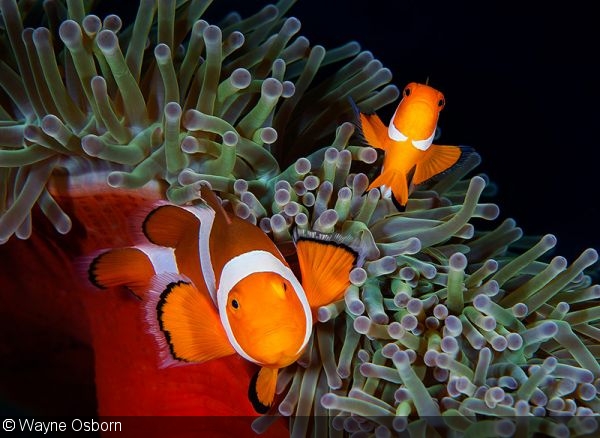 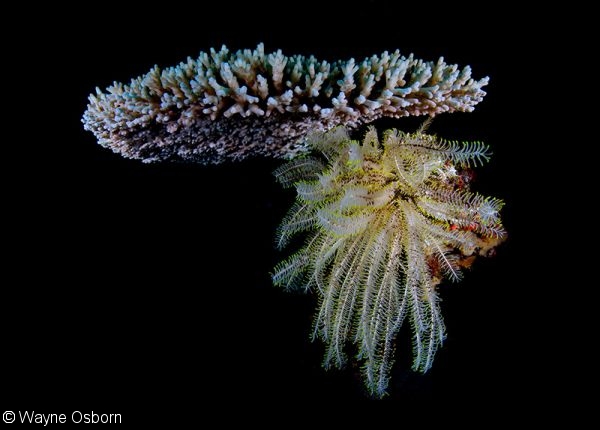 An acropora plate coral and crinoid

Wakatobi is an acronym for the four main islands of Wangi-Wangi, Kaledupa, Tomia, and Binongko, which, together with smaller islands, comprise the Tukang Besi Archipelago at the southeastern tip of Sulawesi. The archipelago is renowned for the diversity of its spectacular coral gardens. Wakatobi’s 3.4 million acres of islands and waters were declared a national park in 1996. The ethnically diverse human population strives to make the area a learning laboratory in areas such as fisheries and agriculture.

The result of all the protections put in place and the vigilance of the Wakatobi team is a world-class experience as a diver and photographer. I can concentrate exclusively on the art of my photography, often taking for granted all the conservation efforts put into place to make it so.

Exotically named dive sites like “Pastel,” “Black Forest,” “Cornucopia,” “Magnifica” and “Spiral Corner” all offer spirited wall diving with visibility in excess of 75 feet. For the most part, the dives at Wakatobi fall into two categories, depending on the direction of current: “left shoulder” and “right shoulder” dives. Having said that, currents are unpredictable and may stop and start without warning. They may even reverse! The key is to just go with the flow and enjoy. 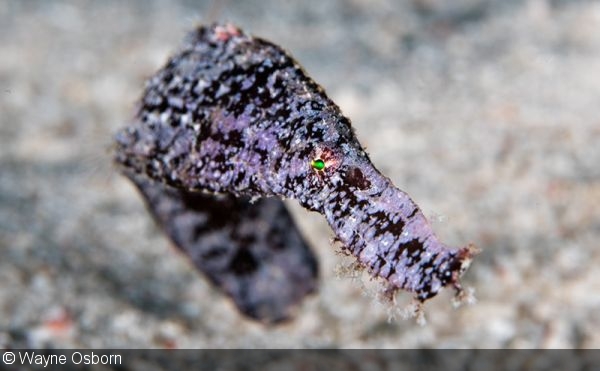 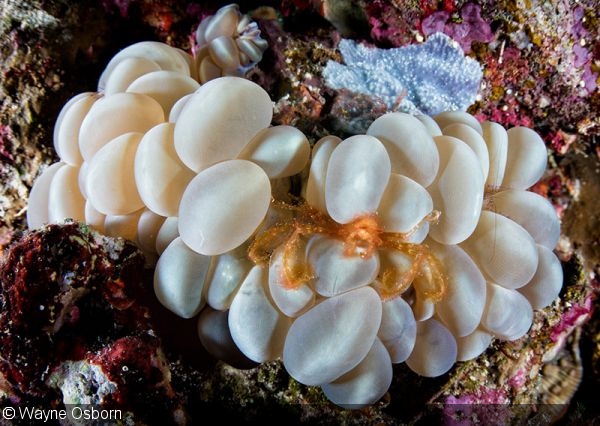 Standout sites include “Blade,” which is a coral pinnacle dive that offers great opportunities for wide-angle photography, with subjects including colorful coral teeming with tiny baitfish and passersby like turtles and rays. Don’t miss this spectacular site, one of my favorites. Of course, colorful reef diving abounds with other notable sites including “Roma,” “Table Coral City,” “Dunia Baru” and “Waitii Ridge.”

Perhaps the best site isn’t more than a stone’s throw from the resort. Wakatobi’s house reef is both a reef flat and wall dive—and ridiculously convenient with access from the beach or jetty. You can spend hours diving or freediving the house reef photographing pygmy seahorses, frogfish, blue-ringed octopuses, and ghost pipefish. 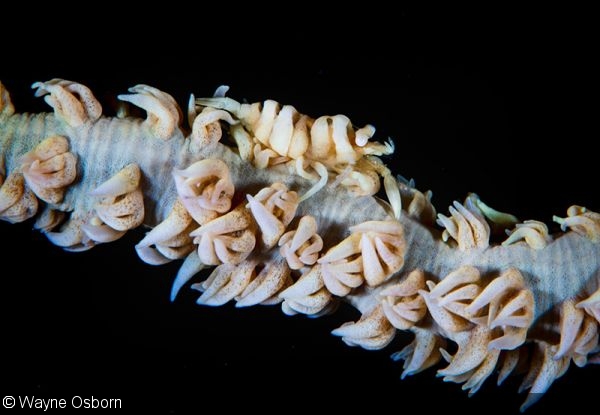 A Zanzibar shrimp on a whip coral 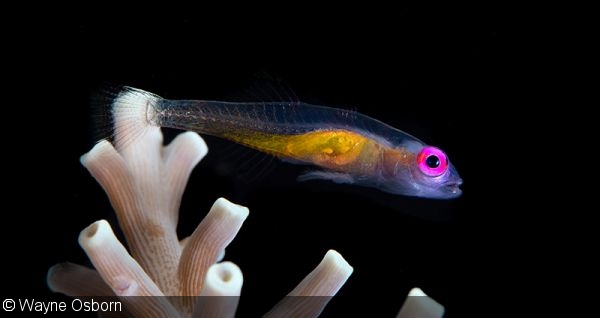 Photography in the Name of Conservation

Be close and honest: When I think about how to get images with the most conservation impact, a quote from the renowned war photographer Robert Capa comes to mind: “The truth is the best picture and best propaganda.” Another of Capa’s quotes, “If your pictures aren’t good enough, you aren’t close enough,” resonates particularly for underwater work, where it’s important to put as little water between you and your subject. It’s a case of letting the animal, environment and image speak its own message. The photographer’s role is just being privileged enough to be there—and then launching the message. 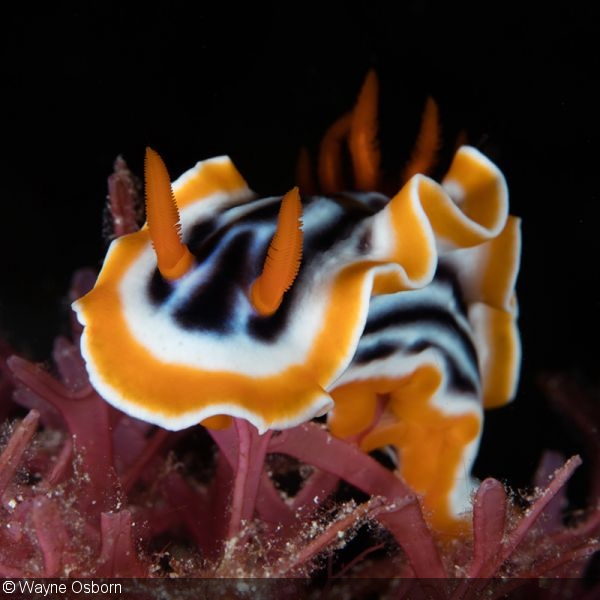 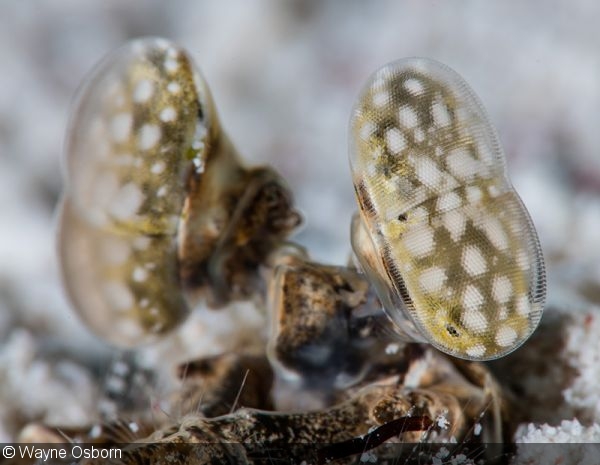 The sharpest eyes on the planet: a super-macro spearer mantis shrimp

Do no harm: Many times there will be a fabulous composition but no room to place the camera without collateral reef damage. Just get over it, swim on and look for the next opportunity. Use local guides to help you understand the boundaries of acceptable approaches and time limits with species that you don’t have good knowledge of. It goes without saying that precise buoyancy control is critical. Responsible use of a reef pick can help stability.

Patience is a virtue: A full-frontal approach at speed to an exciting subject may be tempting, but ultimately a gentle, slow approach can be more productive. Many fish don’t like direct eye contact, as silly as that sounds (just think what you and your camera rig with extended strobes must look like from their viewpoint), so a sneaky, deceptive approach with averted eyes sometimes works. Fish often have a routine patrol run, so setting up an “ambush point” is a good strategy. Treat time as your friend. The more time you are in or on the water, the luckier you’ll get and the more behavior you’ll observe. 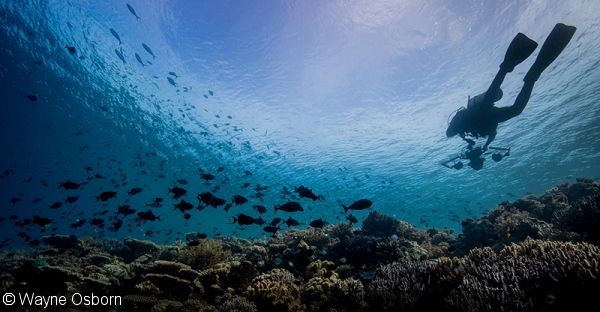 A photographer patrols the reef platform

Just in case you can’t access this article or DPG’s Techniques section while at Wakatobi, the resort offers the next best thing—a photo pro. Marco Fierli is an outstanding underwater photographer in his own right and sets himself almost impossibly high standards. We always look forward to seeing his latest work. Marco's enthusiasm is infectious and exceeded only by his professionalism. His new venture in photography courses and coaching will be invaluable for both beginners and experienced photographers. 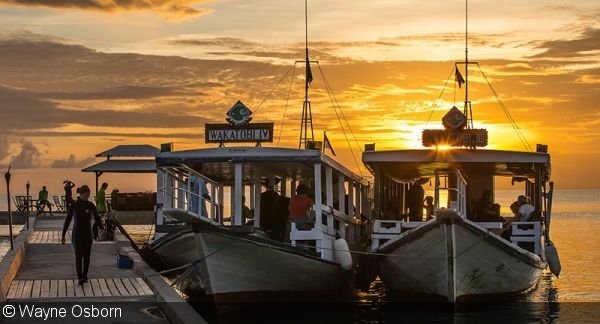 About the Author: Wayne Osborn started diving in 1974 with a particular interest in shipwrecks and freshwater caves. He has a long-term interest in underwater photography and started out with a Nikonos II. He converted to digital 10 years ago and enjoys the freedom this technology brings. Wayne took the opportunity to retire early from full-time work seven years ago. He and his wife Pam now indulge their passion for wildlife photography and travel. They have an interest in whale conservation and work closely with researchers to provide behavioral and identification images. In 2004, Wayne was elected a Fellow International of the New York based Explorers Club for his work in the marine environment. One of Wayne’s dwarf minke whale images is on the cover of the new edition of “Marine Mammals of the World.” An image of three squid at Raja Ampat won him the 2012 Australian Nature Photographer of the Year award.