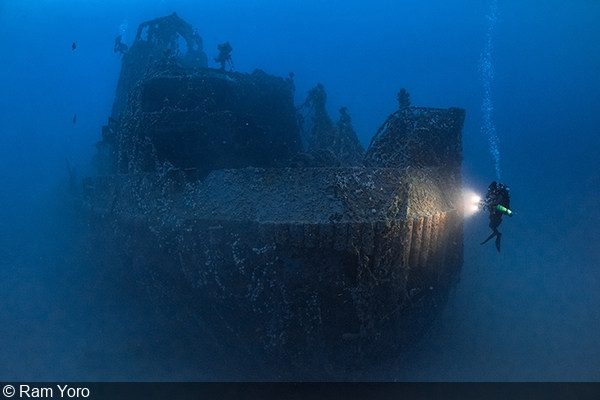 It was with great curiosity that I embarked on a trip in 2019, upon the invitation of our hospitable friends at Poni Divers, to document the wrecks of the high seas of Brunei. My excitement was tempered by the scant information available on the iron treasures that awaited, but my more optimistic gut feel could not contain it. Knowing that Brunei’s 160-kilometer coastline hosted global conflicts and active merchant shipping over the centuries, it was hard not to expect a few good ones at least.

True enough, upon arrival I immediately learned from my generous hosts that there were in fact more than the eleven wrecks I had initially managed to unearth online. It was naive of me to presumptively trust the Internet in the first place, but I was thrilled to be mistaken. At present, the growing catalogue of shipwrecks in Bruneian waters include eleven commercial vessels, five warships, three barges, and two decommissioned oil rig sites. All of these are within recreational depths except for five that lie in the 45-to-70-meter range. The list, initially put together by a group of passionate expatriates with the Brunei Sub Aqua Diving Club (BSADC), founded in the 1980s, continues to grow as the zeal for exploration is kept alive by the fresh generation of locals at Poni Divers. 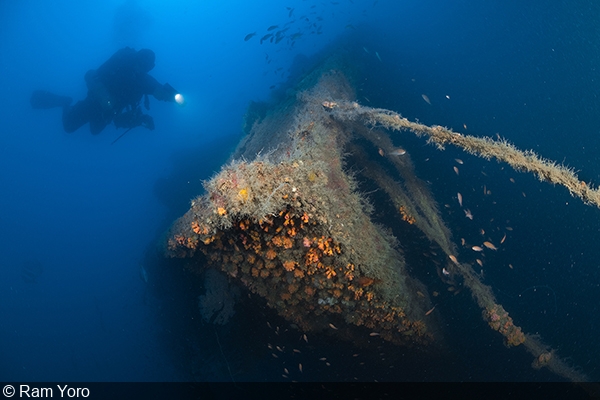 The bow of the 89-meter cargo vessel MV Southern Glory, a casualty of unfriendly weather in the open seas in recent times (1993)

After several days of amazing wreck diving, it dawned on me that the place is undoubtedly special. Brunei’s seas are an obscure graveyard for well-preserved wrecks that are consistently filled with marine life and artifacts. Hulls and superstructures have remained relatively intact, only bearing marks of the violence of war and the harshness of time. Delicate corals and fish have thrived, now enveloping the wrecks in and out. Artifacts lie around the wrecks, forgotten like its rusting hosts. It’s a wonder how the Bruneian wrecks have escaped the attention of the global wreck diving community for so long, but it’s obvious that that is about to change. 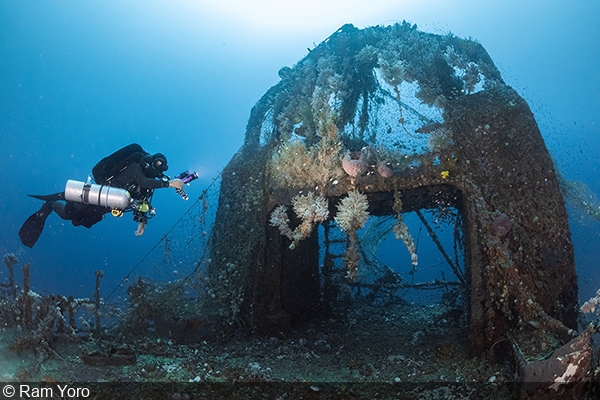 The Petani Mistral 5801’s superstructure stands out in the blue 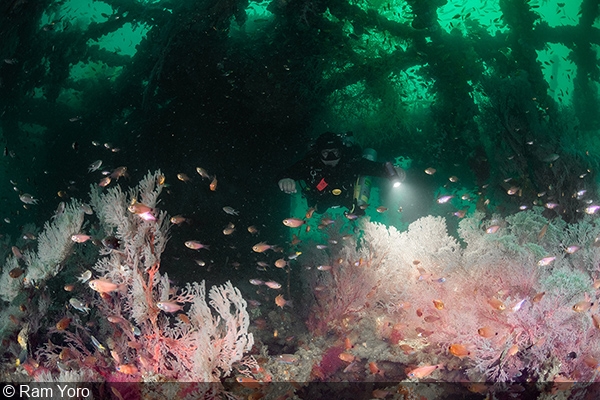 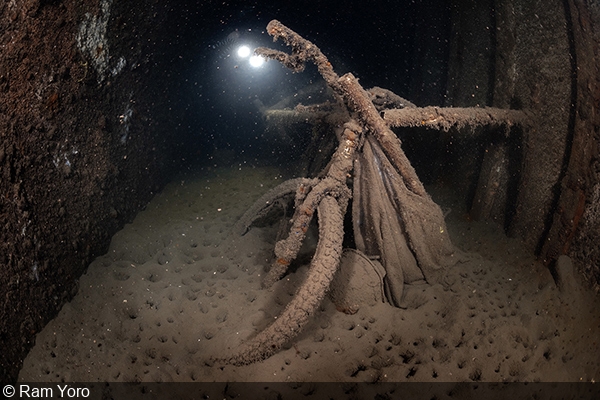 A lonely bicycle looms inside the artifact-filled MV Dolphin 88, an LCT ship that sank due to violent thunderstorms and a heavy cargo of granite and timber

Most notable of the many wrecks in Bruneian waters are what the locals refer to as the “big four”: the Australian Wreck, the American Wreck, the Bluewater Wreck, and the Cement Wreck. This quartet comprises huge, highly entertaining shipwrecks, each with fascinating stories attached to it. As such, they are among the most frequented wrecks in Brunei, and a must-visit for any diver or underwater photographer.

Take for instance, the 94-meter Australian Wreck. Initially without formal identification and just presumed to be a warship sunk by the Australian Airforce (hence the name), it turns out she was originally the commercial passenger ship SS De Klerk, requisitioned and converted by the Imperial Japanese Navy to the notorious hell ship Imaji Maru. As the tide of war was changing against the Empire of the Sun, Imaji Maru made a run from Singapore to Manila with a quick stop in Brunei when she fatally hit, ironically, one of the Japanese marine mines. Three hundred thirty-nine souls perished with her, mostly POWs, laborers, comfort women and a few Japanese soldiers.

There were no efforts to salvage the ship nor her casualties, and it is said that way back in the 1980s, the currents would occasionally uncover skeletal remains buried in silt within the wreck. Over time, the rising silt from the bottom, though, seems to have finally buried the remains of the departed for perpetuity. Today, the Australian Wreck—as she is still commonly referred to—is visited for her display of impressive structures and artifacts: among other things, the skeletal frame of her long and massive hull, her steam engine, winches on deck, tires, cement bags, chains, and even several toilets. 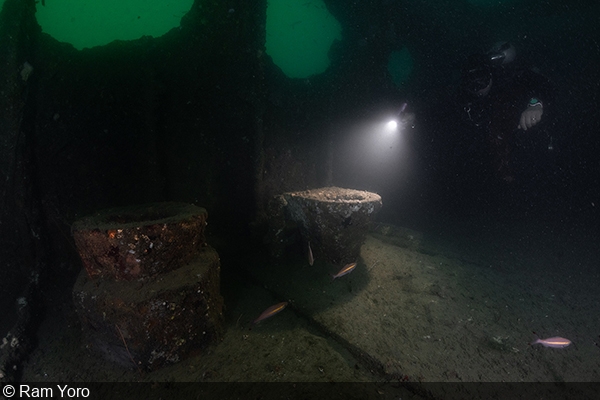 Several toilets can be found inside the Australian Wreck—but not enough to accommodate the 1,210 slaves and laborers she was transporting 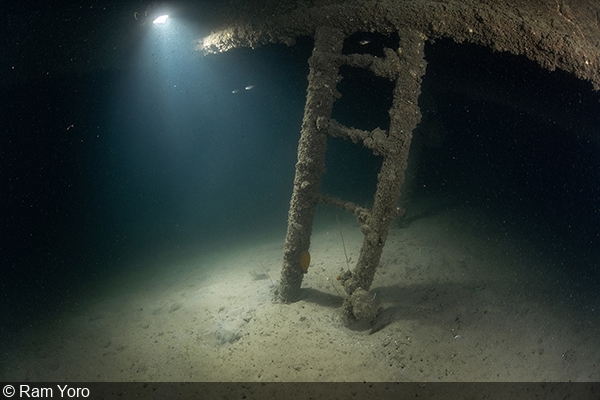 Silt has accumulated in the bottom of the cargo holds, forever obscuring the hell ship Imaji Maru’s ghastly secrets 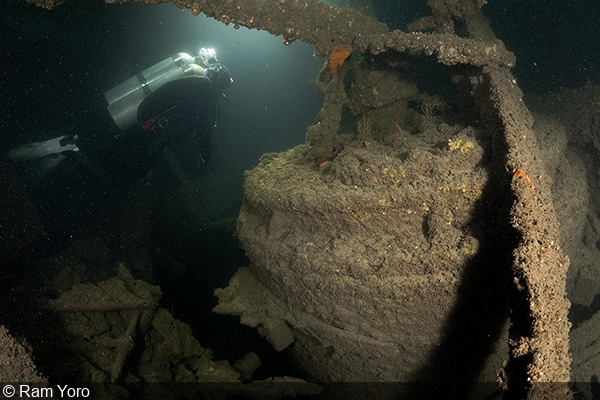 The American Wreck, a decorated World War II veteran minesweeper, is also a war grave. Known as the USS Salute AM-294 while in service, she was often with the advanced invasion force that preceeded the Allied landings in the Pacific War theater. Notably, she partook in several liberation campaigns, including the biggest naval battle in history—the Battle of Leyte Gulf. Her last assignment was to lead her division in the pre-invasion clearing of the coast of Brunei, where she ultimately succumbed to an unsuspecting mine. The mine exploded in her underbelly amidships, violently tearing her hull in two.

As a result, the wreckage is in tatters, with the torn forward hull sitting partially over her stern hull. Amazingly, a good portion of her stern hull is still intact, displaying some of the lethal depth charge racks on deck and could even allow for some shallow but thrilling penetration. Inside the stern hull, qualified divers are able to peek into the rudder room and a couple of pristine storage rooms where workshop materials can still be seen sitting neatly on the shelves. When outside the wreckage’s perimeter, it pays to always swim slowly for a chance to see more artifacts such as the ship’s anchor, various bullets, boots, flasks, and paravane cables. 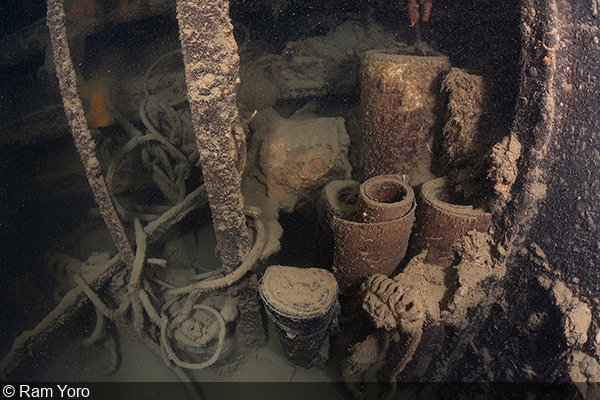 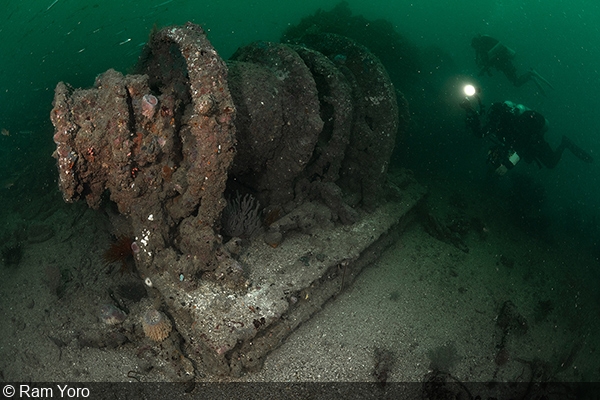 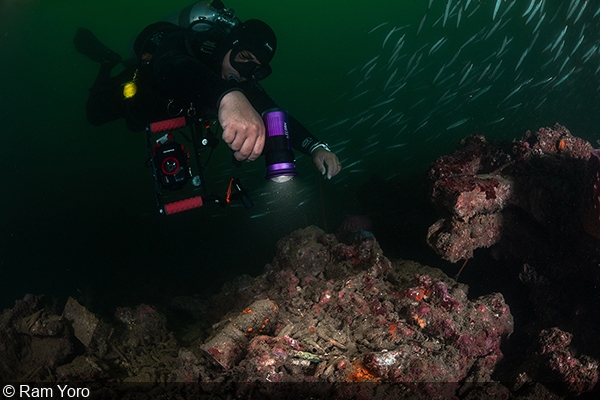 The Bluewater Wreck, meanwhile, is a 79-meter trawler lying port side at roughly 35 kilometers off the coast of northern Borneo. She was actively purse seine fishing for tuna in the area when fire suddenly ignited on-board and snowballed until the ship sank. For many years, her true identity—other than being a large trawler—was a mystery. Recently, it was determined that she was the MFV Mabini Fadri, one of the many ships in the prolific fishing fleet of the former RJL Martinez Fishing Corporation based in neighboring Philippines.

Still relatively intact, the wreck allows for some interesting penetrations to her engine room, huge refrigerated holds, and messy hallways. On her deck, you can swim by the tall masts and large winch presumably used in hauling her catch back in the day. And besides the crystal-clear waters that inspired her moniker, she is always enveloped with an abundance of fish. 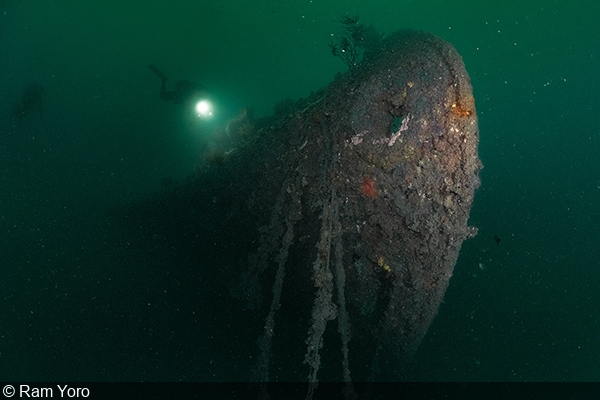 The Bluewater Wreck on the sandy bottom of the Brunei sea, lying on its port side 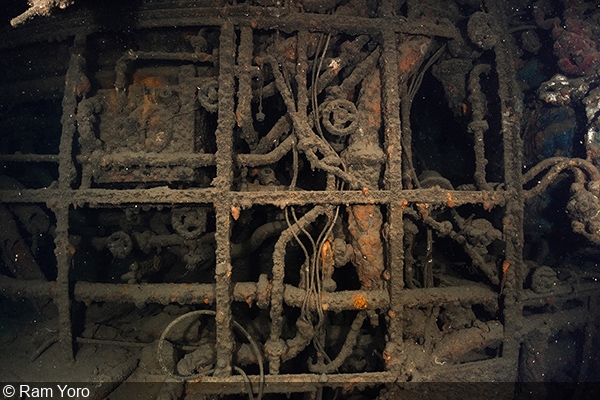 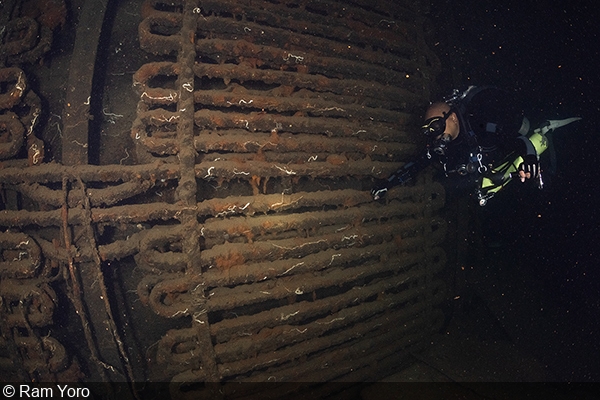 Capping the “big four,” and probably the most visually appealing of them all, is the Cement Wreck. Originally known as the cargo ship MV Tung Hwang, the ship was transporting tons of cement supplies from Taiwan for the construction of the Sultan’s magnificent palace, the Istana Nurul Iman, when it accidentally hit shallow rocky obstructions in the Samarang Banks. She survived the initial contact but eventually foundered in Brunei’s waters not far from the Bluewater Wreck.

Today, her 90-meter wreck stands upright, with kingposts still reaching for the skies. The superstructures are already fragile from the constant pounding of the open-sea currents and surge, but still allows cautious penetration for the qualified and careful diver. On deck, cement bags are strewn all over, but these are gradually being covered by dense marine flora. When visibility is clear, which is fortunately often the case with the Cement Wreck, her massive, intact structure is an oasis of colorful corals and lively fish in the otherwise sandy ocean bottom. 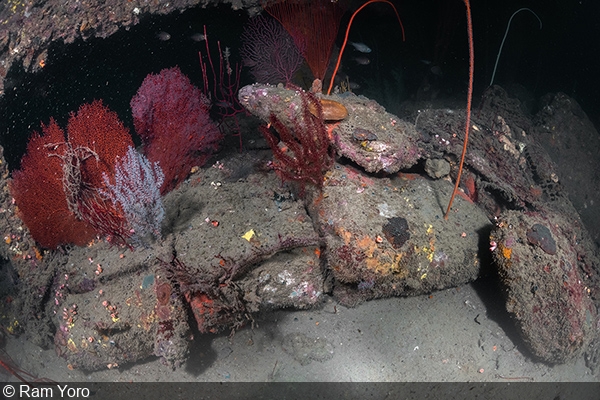 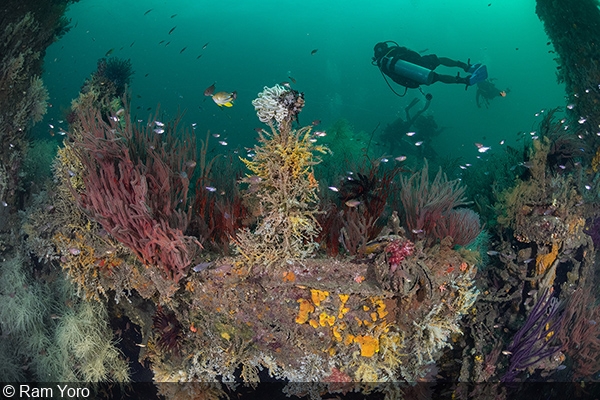 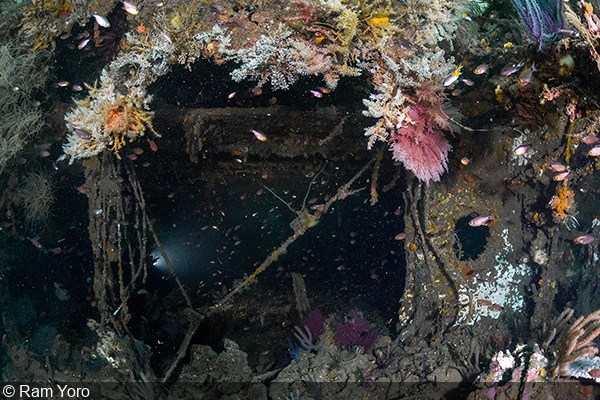 The “big four” are an excellent treat for any wreck diver or photographer, guaranteed to leave a lingering feeling of awe days after your dive. However, be forewarned, this foursome may be the local favorites, but it would be a great mistake to miss out on the other wrecks. Many visitors will attest that the rest of the Bruneian wrecks are just as amazing or maybe even better in some regards.

In my case, none of the wrecks I have visited in Brunei have failed to amaze, whether it be through structures, artifacts, marine life, or by their storied histories. Often, in fact, it’s a combination of these different allures. I will not be surprised, therefore, if some will have their own version of the “big four”—or perhaps expand their list to the “big eight” or more. In any case, Brunei is definitely and deservedly poised to become the next sought-after wreck destination. And since all wrecks are in a state of constant decomposition, destined to rust away someday, the time to cherish these underwater treasures is now. 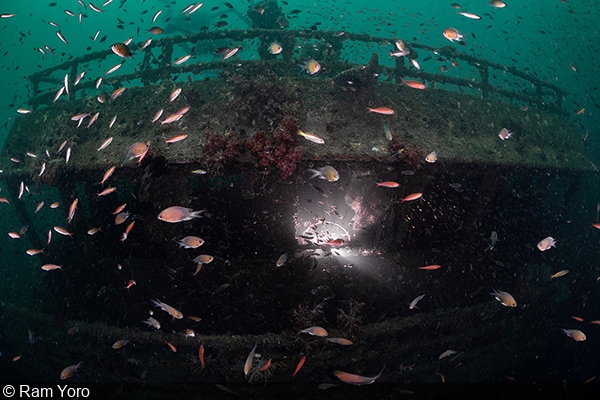 The wheel of LCT Dolphin 88 is a must-see 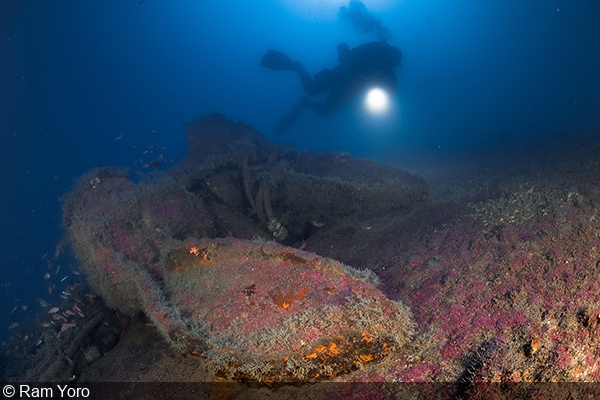 Most of the Bruneian wrecks still have their anchors and propellers: This anchor belongs to MV Southern Glory 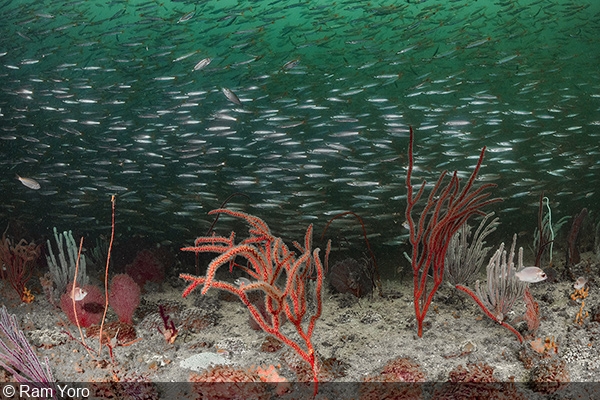 A typical scene at the wreckage of Tali Barge: The abundance of marine life can sometimes make you forget you are on a wreck site 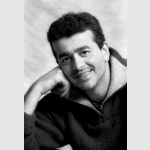