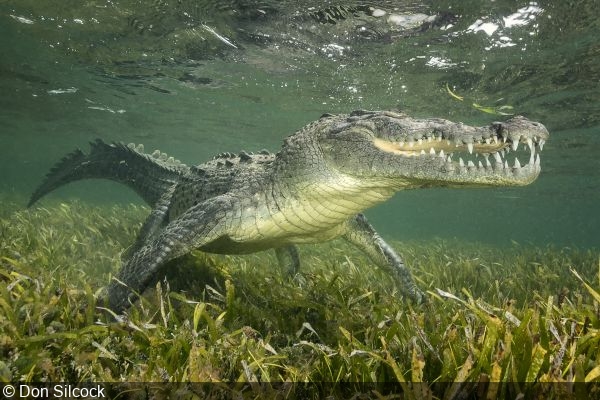 I have come to realize that photographing big and charismatic animals underwater actually borders on the addictive, because the more of these trips you do, the more encounters you hear about and the “must-do list” continues to grow… So it was, when a conversation over an après-dive adult beverage led to the subject of in-water encounters with crocodiles.

Being a proud Australian, naturally my thoughts were immediately drawn to the saltwater crocodiles of the Northern Territory—an animal that hits the headlines quite regularly because of its deadly attacks on humans. In the animal’s defense, though, it must be said that those attacks are often on either foreign tourists who have completely ignored the very prominent “No Swimming” signs, or local guys out fishing failing to understand the basic link between excessive alcohol and poor judgement around dangerous wild animals.

“Salties” take their name from the fact they are not limited to murky freshwater rivers and lakes, unlike most crocodiles. Instead, they have developed a tolerance for salt water that allows them to prowl coastal waters and occasionally swim quite far out to sea. There appears to be no way to safely photograph these extremely dangerous creatures underwater, or even get close to them, except perhaps by using some form of motorized cage. 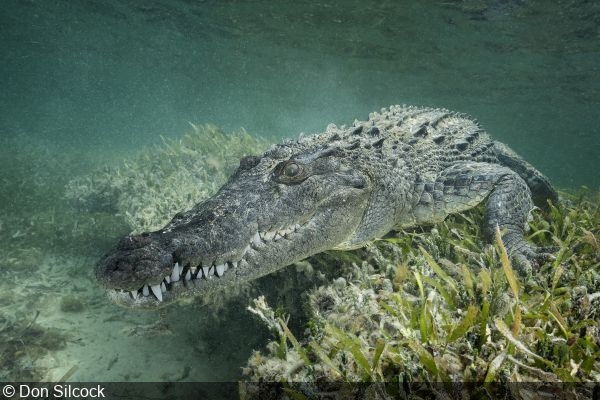 A cousin of our apex reptilian predator, the less well-known American crocodile has also developed a tolerance for salt water. But unlike its antipodean relative, they are not considered to be aggressive to humans, and only a few (unverified) cases of fatal attacks have been reported. As its common name suggests, Crocodylus acutus can be found all the way from the Everglades on the southern tip of Florida, throughout the Caribbean and Central America, down in to northern end of South America in Ecuador, Columbia and Venezuela. One of the best places for reliable up-close underwater encounters with the American croc is Banco Chinchorro in the southeast of Mexico, near the border with Belize.

Some 12 months on from that après-dive adult beverage, a lot of Googling, and flurries of emails saw me sat in a van driving south from Cancún airport on Mexico’s Yucatán Peninsula—after the obligatory marathon journey from Australia—with a small group of like-minded characters I would come to know quite well over the next few days. 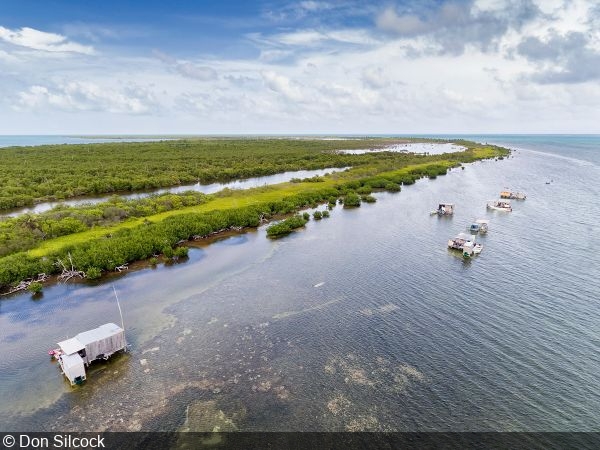 At Banco Chinchorro, there isn’t much around except fishermen and crocodiles

Although hardly a household name, Banco Chinchorro is in fact one of the largest coral atolls in the Northern Hemisphere and a UNESCO Biosphere Reserve. Covering an area of around 300 square miles, and located some 20 miles offshore, the reefs of Banco Chinchorro are very healthy and a real joy to dive.

If it’s the crocodiles you’re after, Cayo Centro is where you need to be: While only just over two square miles in size, it is the largest of the three islands on the atoll and is home to a permanent estimated population of between 300 to 500 American crocodiles. It also hosts a small seasonal population of local fishermen who have built a scattering of about 10 huts on stilts, called palafitos, above the shallow waters of the lagoon on the east shore of the island and a similar number onshore called cabañas.

Quite how and when the crocodiles took up residence is not clear, but the dense mangroves of Cayo Centro offer the perfect habitat for them, with the rich waters around the island providing plenty of sustenance. The crocodiles and the fishermen have an almost symbiotic relationship, tolerating one another’s presence in this remote location. The main signal for interaction is the noise of the chopping tables: The fishermen fillet their catches on tables above the lagoon at the palafitos and at the water’s edge at the cabañas, and the crocodiles will immediately gather when they hear the knives on the chopping boards. For the crocs, it’s snack time; for the fishermen, it’s automated waste disposal. 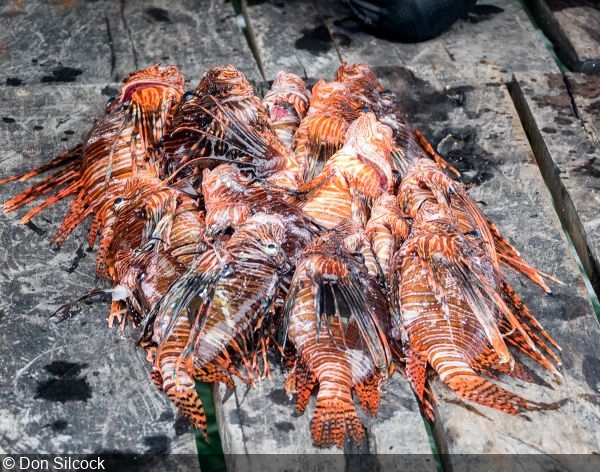 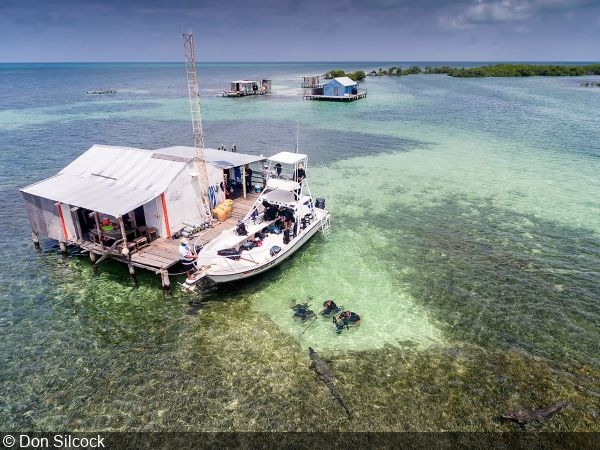 UNESCO describes biosphere reserves as “learning places for sustainable development.” In practice, that means strategies are developed and then tested in the specific reserve to allow a degree of development that does not destroy the original biodiversity and to manage potential conflict between stakeholders—the “developers” and the “incumbents.”

It does by that by establishing three zones within the overall area of the biosphere, consisting of a core area, a buffer zone, and a transition area. The core area, as the name suggests, has the most sensitive biodiversity, is strictly protected, and is a research-only zone. The surrounding buffer zone can be used for ecologically sound activities, including tourism, recreation, and human settlement. Finally, the transition area seems to be somewhat of a “gray zone” that provides some wriggle room during difficult negotiations between the stakeholders.

Banco Chinchorro Biosphere Reserve is formed by rings of coral reef with shallow lagoons on the inside with steep drop-offs on the outside. It is part of the Mesoamerican Barrier Reef System, which extends from the southern half of the Yucatán Peninsula to the Bay Islands of Honduras. The area was declared a reserve in 1996 with the specific aims of protecting the coral reefs and marine biodiversity, while also enabling fishing cooperatives to maintain their livelihoods based upon the sustainable extraction of lobster, conch and scalefish. 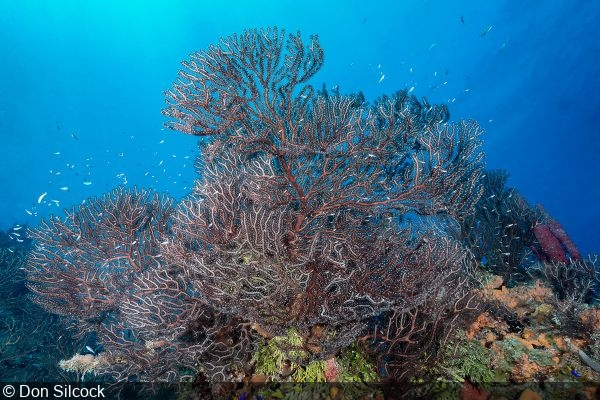 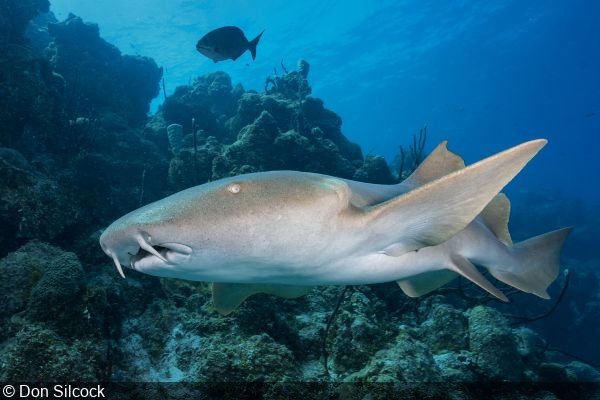 In-water encounters with the crocodiles of Banco Chinchorro are done on snorkel as it is too shallow for scuba near the palafitos—plus it is easier to maneuver when unencumbered by dive gear. Positioning and visibility are the key to safe encounters and our palafito had some prime real estate just in front of its main porch in the form of a large sandy patch that stretches out to the left of the hut.

Most of the lagoon has a rich coating of seagrass on the bottom, which the crocodiles blend in perfectly with when they submerge, making them hard to spot from the surface. The sandy patch makes it very easy to see who or what is there: The basic concept is to keep the humans on the sandy patch and the large reptiles on the seagrass.

By mooring the boat alongside the palafito, one direction is blocked and the sandy patch means that any crocodiles sneaking in can be spotted, and by feeding them from the front of the boat, the “encounter zone” is quite well defined and controllable! The actual in-water control is done with a wooden stick, albeit a large one, but a stick nonetheless. It is used by the wrangler to warn and calm the crocodile when it gets excited or aggressive, and as a vertical barrier if it advances onto the sand. Despite my initial doubts about its usefulness, it turned out to be remarkably effective! 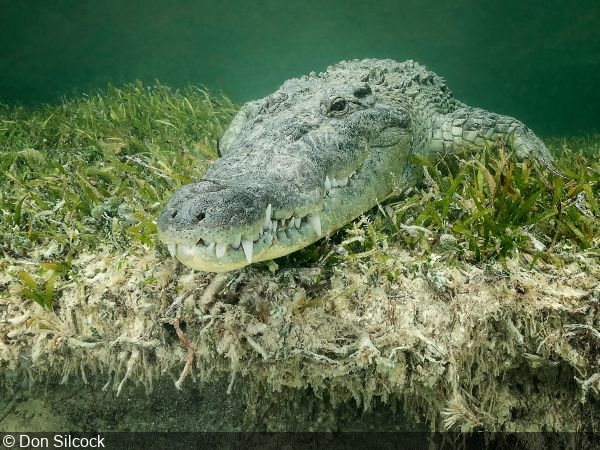 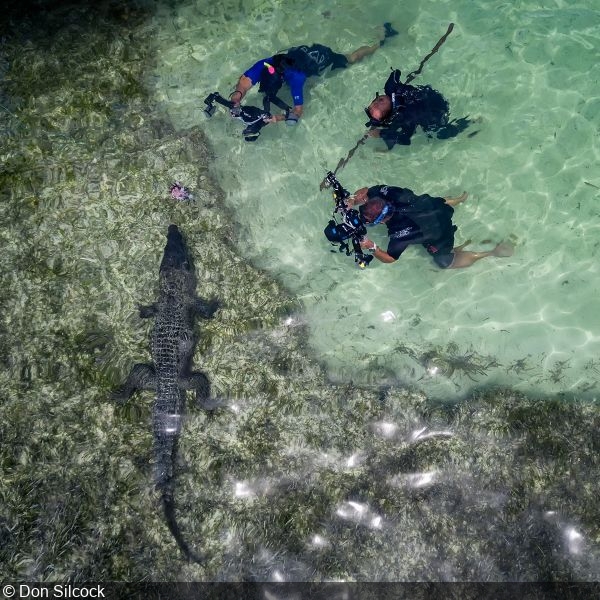 Like all reptiles, American crocodiles are cold-blooded and breathe air, so they are most comfortable in warm, shallow waters. The extensive mangroves of Cayo Centro at Banco Chinchorro offer an almost perfect environment. The animal is categorized as a relatively large species, with males reaching maximum lengths of 16–20 feet when fully mature, while females are generally smaller at around 10–12 feet.

The American crocodile is currently listed on the IUCN Red List as “Vulnerable” principally because its skin is a commercially viable product, which led to significant hunting of the animals from the 1930s through to the 1970s. It has been estimated that their overall population declined by at least 20% during that period. But times have changed, and habitat destruction is now considered as their greatest threat. 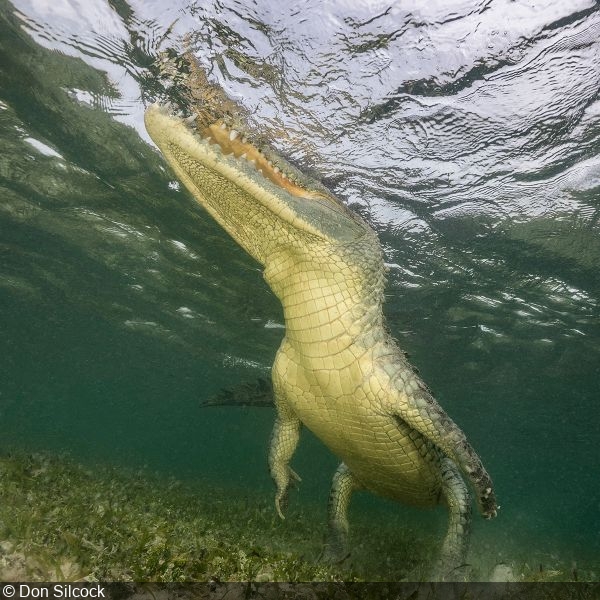 Of course, all those eminently sensible logistics were far from my mind as the time came to get in the water for the first encounter, and I was very nervous as I descended the ladder at the back of the boat for the first time. Suddenly, in front of you is a serious-looking piece of reptilian hardware that is watching you as intently as you are watching it—“inscrutable” is the word that comes to mind.

Underwater encounters with big animals are rarely, if ever, static—they move, often constantly and occasionally very fast—but American crocodiles remain completely still, with a coiled-up energy that is only unleashed when they attack. The problem is that there is virtually no way of knowing when that will happen, so there is an intense tension as you maneuver closer to get good images, knowing that should the trigger occur, you are very reliant on that wooden stick and the reaction time of the crocodile wrangler. 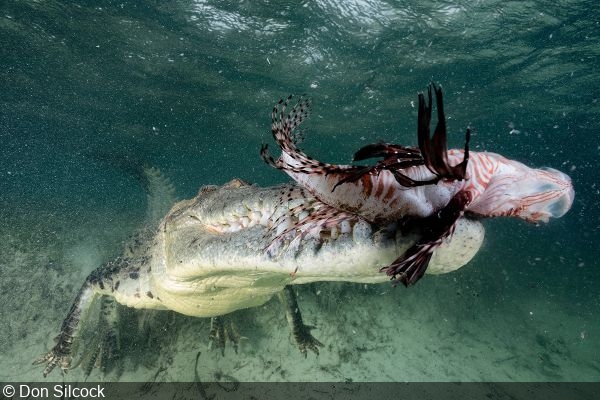 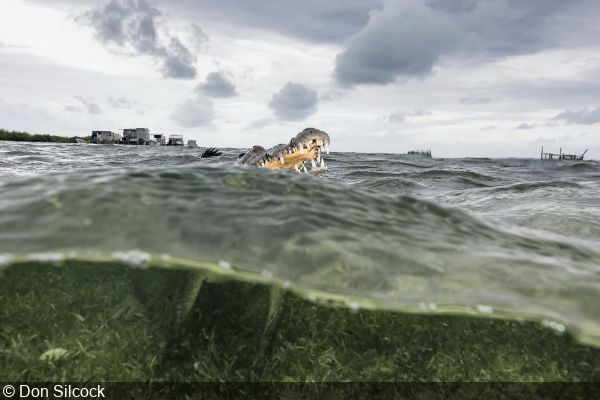 The water is shallow, so split shots are possible—providing conditions allow

So, is it dangerous? “Probably” and “possibly” both qualify, as there is no doubt that they could inflict considerable harm if they wanted to, but nobody has been attacked. Is it special? Without a doubt. Getting so close to such large and potentially dangerous reptiles is something else. Plus, staying in the fisherman’s palafito—with no running water and just a small generator for power—is quite an experience! And was it worth the long haul from Australia? Absolutely, yes! Even if Banco Chinchorro is a little off the beaten path, the epic encounters with these beguiling big animals are worth every bit of effort to get here. 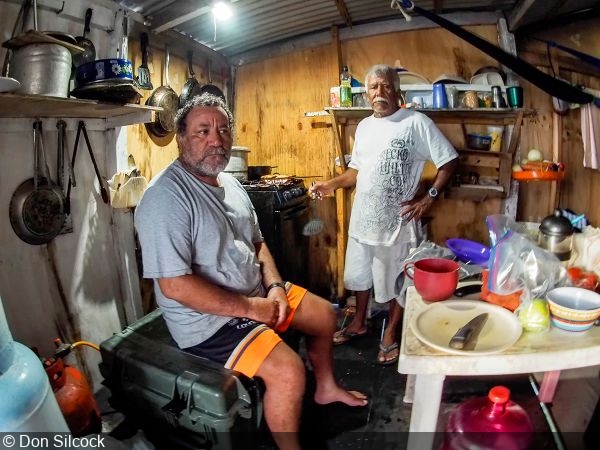 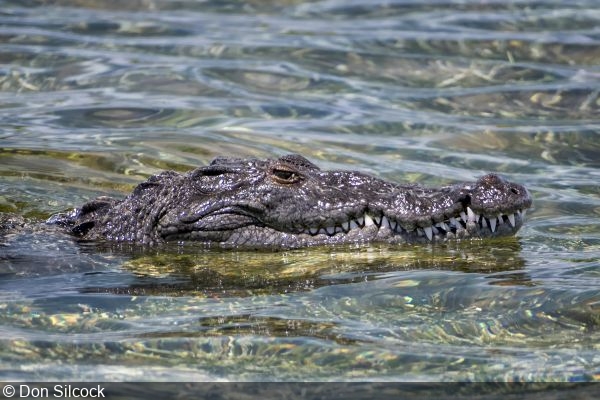 Not all of the most satisfying shots are taken underwater: Look out for crocs when you are at the surface, too