An Introduction to Underwater Video Composition 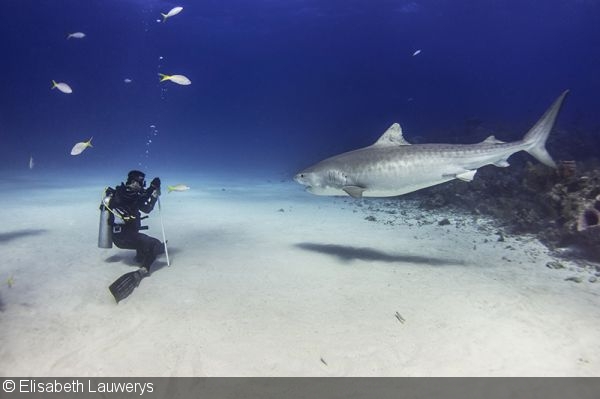 Shooting underwater video has become hugely popular in recent years. The combination of small, high-quality video cameras on the market and easy sharing via popular social media sites has made underwater video accessible for everyone.

Shooting underwater video is an art form. And just like any art form, there are a wide variety of styles. It takes practice to learn how to create video that is entertaining, beautiful, and artistic. The advantage to filming underwater is that you find yourself in a world filled with interesting things to shoot. However, in order to make your videos visually compelling, you will need skills that go beyond just pointing your camera at an interesting subject. You will need to understand and use various composition techniques, camera angles and camera moves to capture attractive footage of what is happening around you.

The first element to consider when taking any video shot is how it is framed, or where the primary subject is located in the frame. Your initial instinct may be to position the subject in the middle of the frame. While this may feel right, a number of shots in a sequence filmed this way will result in a visually dull video. A common rule of thumb followed by photographers and videographers is the “rule of thirds.”

This is done by dividing the frame into thirds, creating nine equal sections. By positioning compositional elements at the points where these lines intersect, you will create a more balanced composition that is interesting and pleasing to the eye. 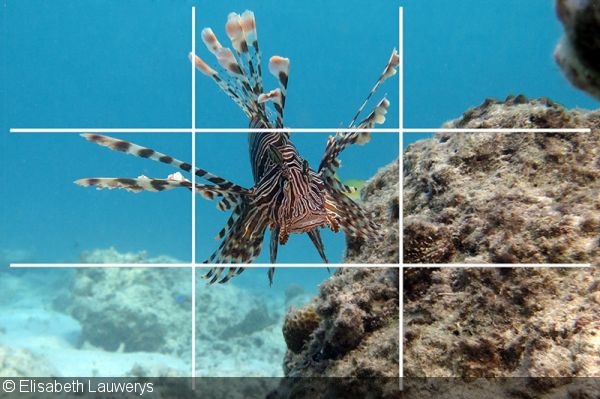 By repeatedly centering the subject in the middle of the frame, our videos will lack interesting composition. 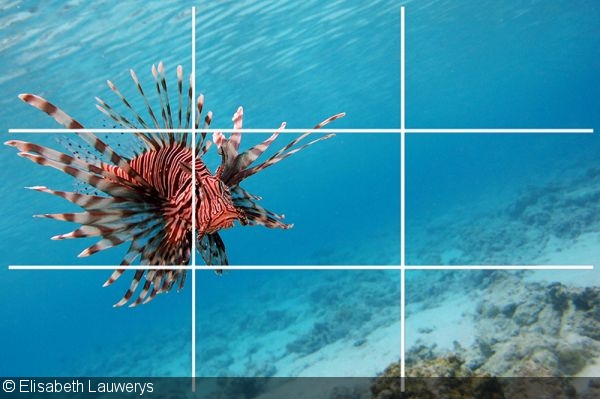 By following the rule of thirds to position the subject on one of the line intersections, you can create a more compelling and engaging shot.

Leading the Subject into the Frame

When shooting video of marine life, it’s best to have it facing the frame. A frontal or side view shot works  best. Nobody wants to watch a video of fish tails swimming away from the camera.

If there is any action in your shot, leave more space on the side of the frame where the action is headed. This will let the viewer have a feel of where the subject is going and become compelled to see what comes next.

Providing room in front of the subject to move into the frame creates a less cluttered composition.

Leaving too much empty space in a scene is often a mistake, especially when shooting smaller marine life. It may create a shot in which your subject is swallowed by its surroundings and may leave viewers confused about what they are supposed to be watching.

To avoid this, you could zoom in to fill the frame, or get as close as you can to the marine critter in question. When zooming, it is easier to exclude what’s shown in the background. Moving closer, physically, can give you a more provocative angle. 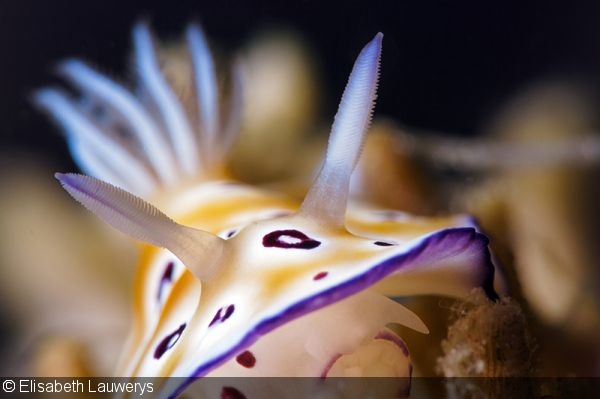 Sometimes, filling the frame either by zooming or getting close to the subject centers the viewer's focus right onto the main subject.

The effective use of negative space can add depth to a shot and direct the attention of the viewer to the subject. Negative space is an empty area surrounding the subject in your image. It draws the viewer’s eyes to your main subject and, if executed correctly, may lead to stronger compositions.

When following a sea turtle swimming over coral, for example, it may be more appealing to have negative space around your subject or scenery. The negative space here could be a blue ocean or the water’s surface. 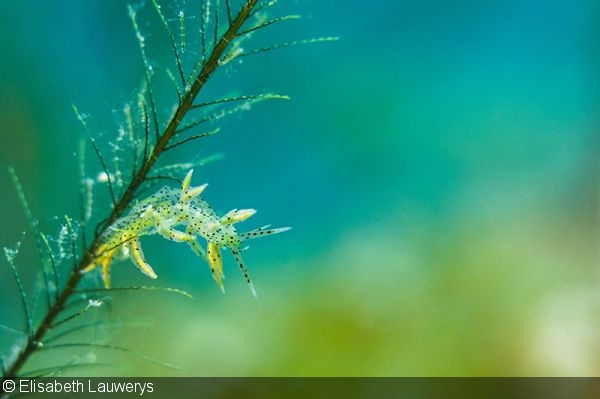 With macro subjects, blurring out the negative space draws further attention to the primary subject in the frame. 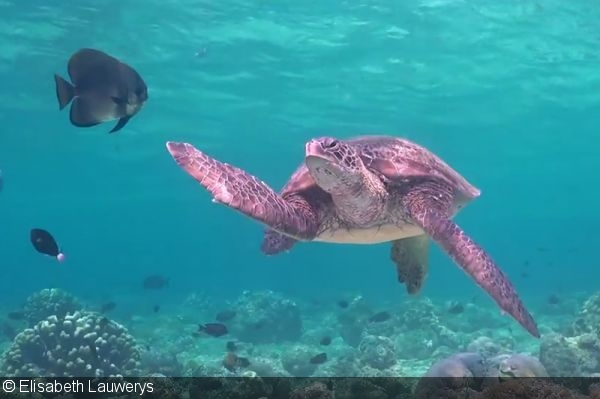 Here, the use of negative space (the open ocean and water’s surface) provides a balance between the main subject and its environment.

When shooting video of marine life, try to avoid pointing the camera down. Position yourself at eye level or even below your subject. This is a much more interesting angle to shoot from and it will usually create better backgrounds as well.

Instead of shooting down onto your subjects, getting at eye level creates a more dynamic composition and connection between viewer and subject.

One of the goals of any shot is to focus the viewer’s attention. To this end, you should avoid distractions both in front of and behind your subject. Your foreground and background should complement the subject, rather than compete with it. Often, just changing or lowering your position in the water column is enough to reframe your subject in a way that creates separation between the foreground and background.

Appealing foregrounds may have some color or action. For the underwater videographer, small reef fish or soft coral moving in the current may be interesting as foreground. An added compositional element could be to add some movement to your shot. For example, you could swim next to your subject while moving past different foregrounds, or even pass through the soft coral in the foreground to reveal your main subject. 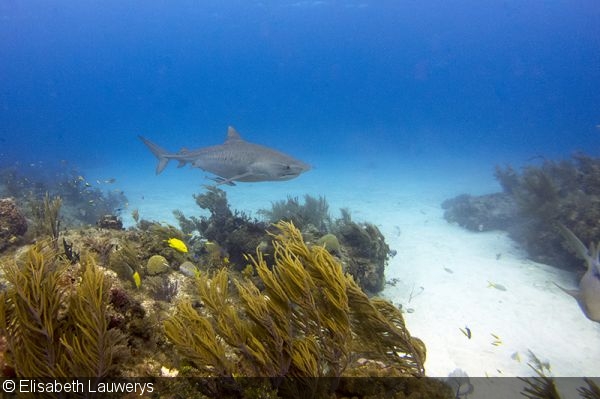 While you don't want the foreground of the video to be distracting, it can be pleasant visually to add colorful elements such as coral, sponges, or reef fish.

To replace a cluttered background with one that complements your subject, you can also use a wider aperture to focus on a small feature of your subject, leaving the background out of focus. This creates what is known as a shallow depth of field, which will make your background less distracting.

Whatever you choose to do, try and make sure the background is part of the story you’re trying to tell with the shot. 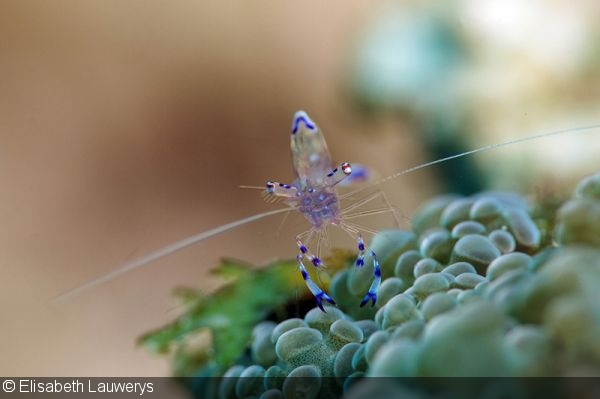 Blurred backgrounds are a popular choice for macro photography, as they have a watercolor-like effect, while also retaining the main subject in focus.

In addition to various types of shot and camera angles, you can also employ camera motion as an effective compositional tool in your videos. When used well, motion can add drama and action to your footage.

Once you achieve good buoyancy control, you can create your own dolly or tracking shots with relative ease and without the need for additional equipment. Underwater camera moves can be used to create interest and convey information.

For example, you could use a flyover shot of a reef to establish the scale of what may be too large to be viewed within a static shot. Movement is also a way of keeping the viewer’s attention and bringing an element of surprise to your work. Avoid using your camera solely in a stationary position. You will probably find that your videos are more interesting when there is some movement in your film.

A video highlighting the use of motion and movement when composing underwater video.

When shooting video, you’ll want to vary the types of shots to maximize interest. Both wide-angle shots and close-up shots—taken either while moving or in a static position—should be used to create a variety of compositions.

This short reel of turtles from around the globe demonstrates the importance of having a variety of the three main shot types: wide, medium, and close-up.

Wide shots are often used as an establishing shot. They allow the viewer to take in the entire setting and are often the first shot in a sequence. Typically, they include images of the environment, such as a coral reef, shipwreck or shallow, snorkel environment. 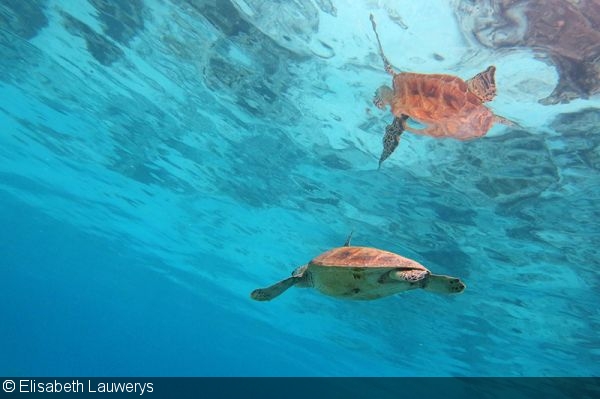 A wide shot of a turtle establishes the subject and the environment.

Medium shots can be of your entire subject, a cropped portion of it, or a tighter shot of a scene that doesn’t include all of the surroundings. These types of shots will make up the majority of your footage, as they draw focus to the subject while limiting any distractions in the background. 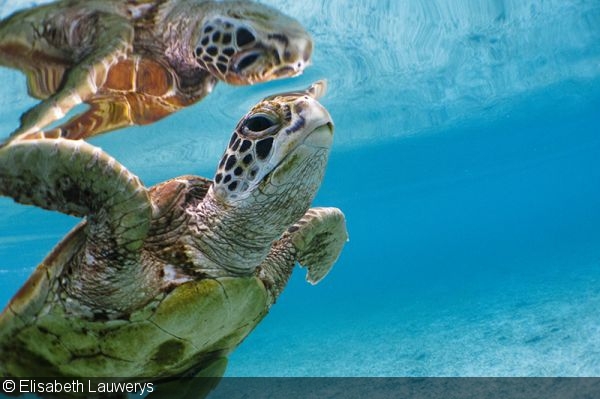 A tighter, medium shot, is a typical profile image of a subject.

Close-up shots are tightly cropped shots showing fine detail or animal behaviour. Examples of close-up shots would be of small marine life or of certain features of a bigger subject. These shots can be important to your storyline and add a different perspective. 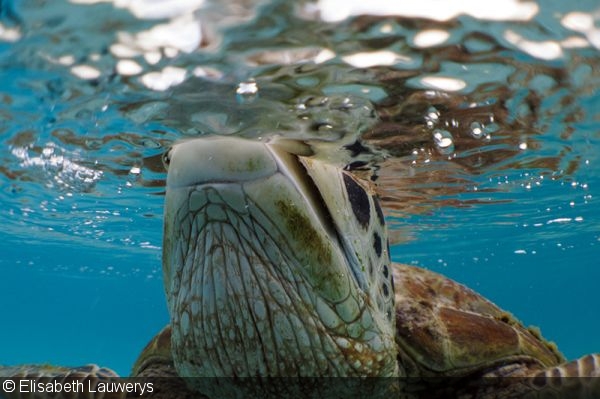 Close-up shots will certainly not be every video clip you take, but when used sparingly, they can provide detail and a unique perspective.

Continued practice with framing your shots, depth of field, and the placement of your subjects is the best way to train yourself in good composition. Ultimately, for every rule, there is an exception. These guidelines are just a starting point and are not meant to be adhered to strictly. An understanding of why these rules work is important if you want to create powerful shots. Once you are comfortable filming within the rules, you shouldn’t be afraid to try and find out when to break the rules in order to improve your filmmaking.

About the Author: As an experienced PADI and BSAC Dive Instructor, Elisabeth Lauwerys has long been passionate about exploring the marine depths. In 2004, she opened Oceans Below Underwater Video Productions on Koh Tao, Thailand. Since then, she has created the dive industry's first professional-level video training course on request from BSAC; won numerous underwater video competitions; worked with the BBC and other production houses; created a new look for the PADI promotional videos; trained a number of industry professionals in the art of underwater video; and has recently started making the transition from video to still photography. She continues to teach budding underwater videographers and travel the world in pursuit of the the most spectacular and diverse diving environments—all the while equipped with her cameras and housings. To learn more about Elisabeth’s work, check out her official website.