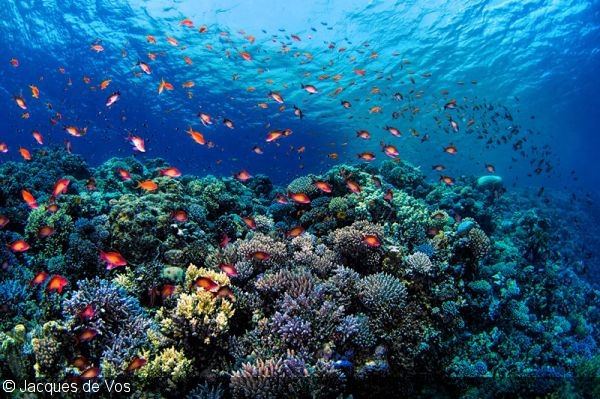 Underwater photographers love showing the viewer what they think would produce a “wow” response, which usually means photographing interesting animal subjects, either big or small. Interestingly enough, it is actually possible to make a similar impression with scenes lacking a tangible subject. By shifting focus from a single subject to the surrounding underwater environment, we can still wow our viewers.

What Are Underwater Seascapes?

Imagine an image of a beautiful crystal-clear underwater scene in the Caribbean with a few heads of coral scattered over a white sandy bottom, which seem to disappear into an endless horizon of blue… got it? Now add a dolphin somewhere quite visible in the image you pictured. What changed?

The image went from being an underwater seascape to a marine wildlife image by simply adding a focal point to the image that draws your attention away from the surroundings—which then become a complimentary backdrop to a more tangible object. The viewer sees the image, immediately focuses on the dolphin, and gives a quick glance at the background to appreciate the dolphin in context. 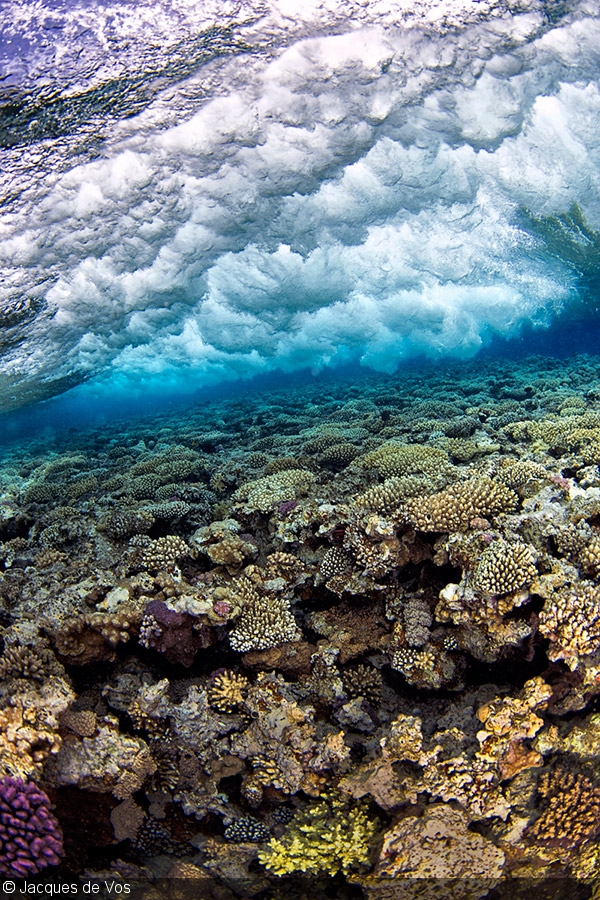 You can create visually compelling images even without a primary subject, as seen here in this image of a vibrant coral reef under breaking surf

There is no real limit to what makes for a great location when shooting underwater seascapes, apart from a decent degree of visibility. If you can see further than the tips of your fins, then you are on your way! This is because an underwater seascape can be a seemingly infinite expanse, like the example above, or even something a bit more “upfront,” such as a low eye view of a scene of seagrass disappearing from right in front of the lens into a mist of murky visibility.

Seascapes (or waterscapes to not discriminate against fresh water) can be found as close as your backyard, or as distant as an exotic reef. It just takes a little exploration to find something captivating to photograph. 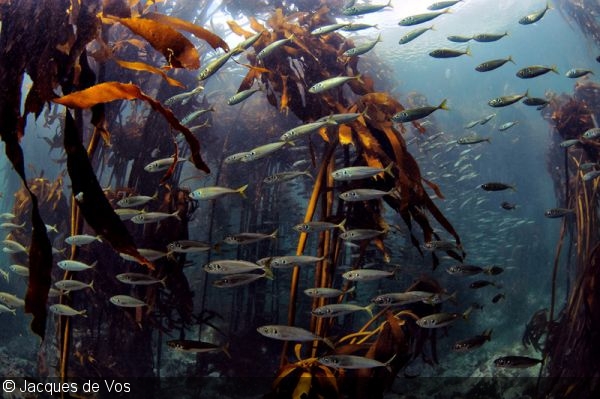 There’s no need to travel halfway around the world to find beautiful seascapes. This kelp forest is found right in the author’s backyard of South Africa

The great thing about shooting underwater seascapes is that you need very little in terms of equipment to get started. There are even people making a living shooting waves breaking on shore with nothing more than an action camera, such as the GoPro.

You can also take wonderful seascape images with a surf or water-sports housing, since most opportunities are in shallow conditions that can be accessed while freediving. The durability of a surf housing also comes in handy when photographing seascapes in rough conditions. I personally shoot with a variety of cameras in Ikelite housings, which combine the durability and lightweight form of a surf housing with the depth-rating of a dive housing.

With seascape images, it is possible to achieve remarkable results without the use of strobes, which means that almost any camera in a housing will do the trick. For added color, strobes definitely make a big difference when shooting something like a coral reef scene as it fills the foreground with light, bringing back all the vibrant colors. Although not a necessity, strobes illuminate some of the darker crevices in the reef and are perfect for shooting underneath overhangs. 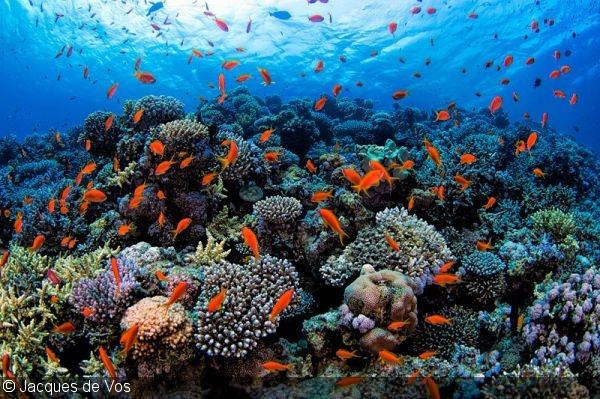 Keep in mind that if you want to light the foreground with strobes, a fisheye or ultra-wide angle is recommended to maximize the field of view. When using fish-eye or ultra wide-angle lenses for seascape photography, consider using a bigger dome port (six inches or larger), which makes over-under photography easier. With this you can combine landscape and underwater seascape images into a single shot.

One other optional accessory to consider is a color-correcting filter. Often the scenes we capture as seascapes are far too large to be impacted by even the most powerful strobe light. In-camera or post-processing white balance works well in shallow (0–10 feet) water, while color-correcting filters add more contrast and color at greater depths (15–50 feet). 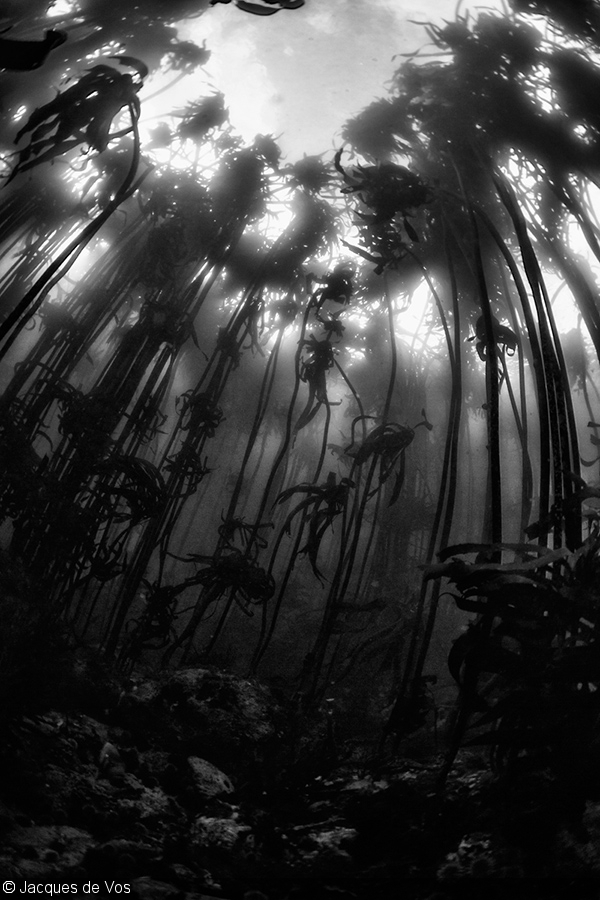 As with most other underwater photography situations, shooting in manual exposure mode gives you far more control over the final image, and is therefore also highly recommended for seascape photography.

When shooting underwater seascapes, the settings will be influenced by water depth and lighting conditions, as both have a direct bearing on exposure. With seascapes (especially over-unders), it’s best to start with a small aperture value, such as f/11 or higher. This will ensure that as much of the scene as possible is included in the depth of field. Then you can slow the shutter speed (not less than 1/100s to avoid motion blur) and increase the ISO to compensate for the aperture. 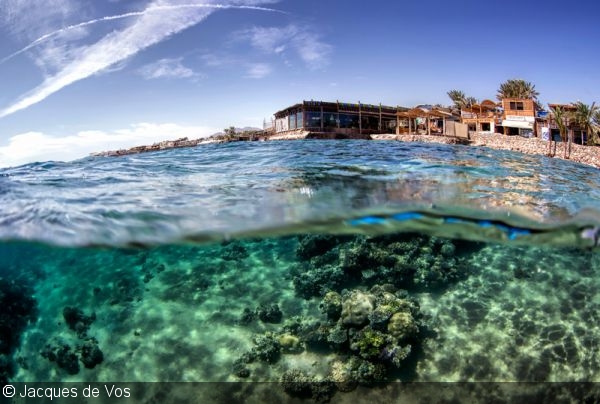 Especially when shooting over-unders, using a smaller aperture (at least f/8) will keep most of the scene in focus

If your camera won’t allow you to shoot in full manual mode, or if you are still new to using your camera, don’t worry. You can still achieve amazing results using the myriad of auto modes available in modern digital cameras. Some have specific modes for shooting in shallow water. Have a look at the creative filters and play with these too to produce different variations on the same scene.

When it comes to focusing, try to focus on something at roughly two-thirds of the distance into your scene. This can be achieved by using autofocus on a single focal point, rather than matrix mode. It probably goes without saying that unlike most underwater photography, which focuses on moving subjects in the water, you are far more likely to have plenty of time to compose the perfect shot. 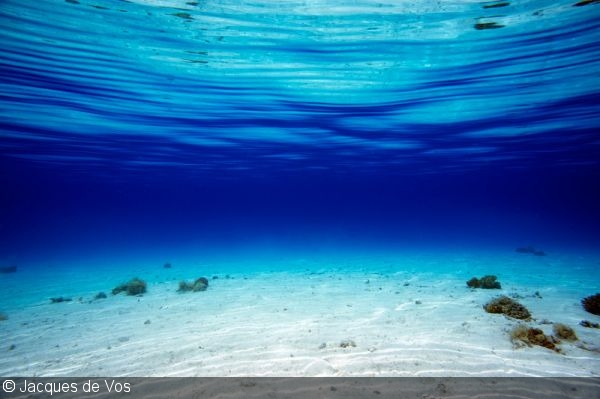 To find inspiration for creating compelling underwater seascape compositions, have a look at the work of some top landscape photographers for ideas. Using photography basics like the rule of thirds is your springboard into great images, but something I find that works well is to try and have some definite vanishing point or horizon to give a sense of space, or perhaps something lying beyond the scene which is visible in the image. 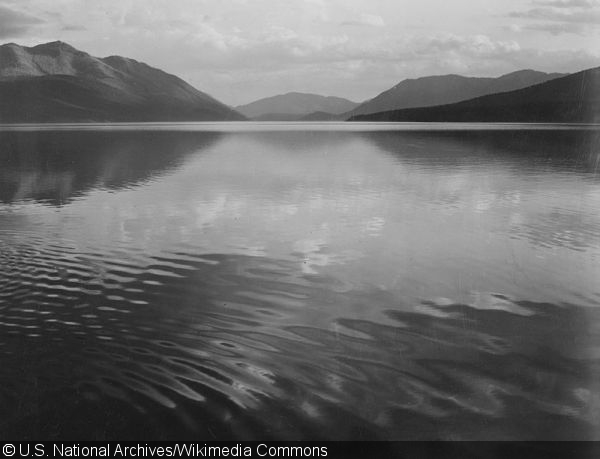 Ansel Adams’ shot of McDonald Lake, Glacier National Park, Montana, 1942. Studying the work of the best landscape photographers can help you understand what separates a good seascape from a great one 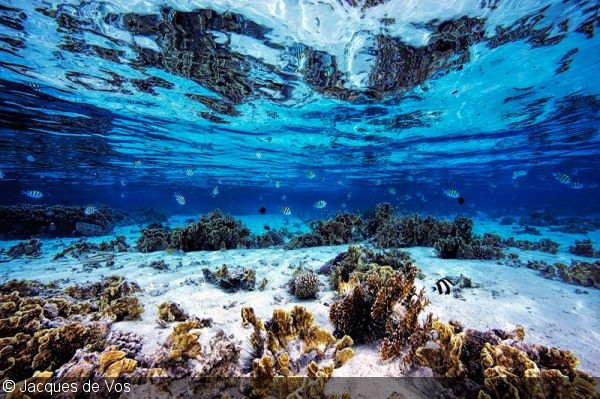 Although we have been primarily focusing on subject-less underwater seascapes, it is of course possible to make some scenes more interesting by adding secondary elements. However, you need to be careful not to make these elements the dominating focal point. A good example would be a school of fish which blends into the overall scene, or even distant divers, swimmers or marine life, which form part of the backdrop of the image. 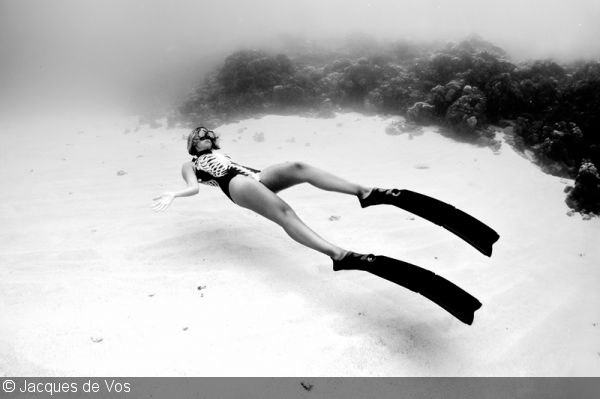 There’s no harm in adding a secondary element to a seascape shot, such as schooling fish or a diver/freediver model

Hopefully this article will nudge a few more photographers to start playing with underwater seascapes, as the possibilities to explore your creativity are truly endless. For inspiration, have a look at the work of the great landscape photographers and how they make use of black-and-white photography, motion or absolute minimalism to capture the attention of the viewer while conveying a sense of being there. 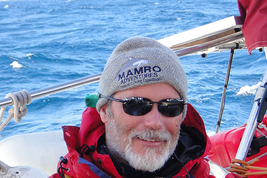