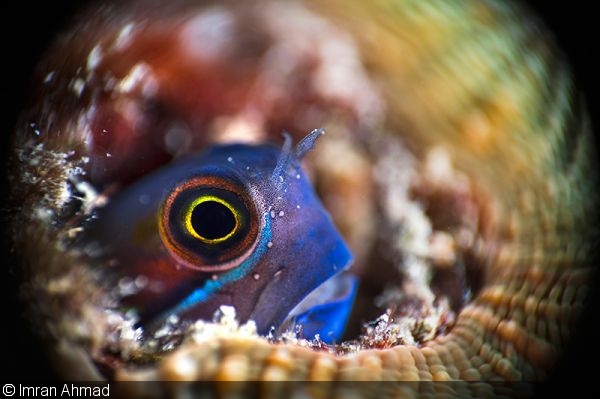 I’ve always been intrigued by images that are different from the rest. Colors, composition and focus can change the way we see the world through an image. As photographers, it’s good that we explore new techniques and revive old ones. With new technologies and ideas, we can change the way we see our subjects. Hence, photography has always been a world in which I could express how I feel and create something out of nothing.

Shooting macro has always been a passion. Using macro lenses on a DSLR was just the beginning; I soon moved to diopters to capture more magnification. But I was not satisfied with the results. I wanted more magnification, but also a more unique look or “character” to the images. It wasn’t just about magnification. Enter reverse ring macro.

What Is Reverse Ring Macro?

Reverse ring macro (RRM) didn’t start off as a creative technique, but rather an inexpensive way to try macro photography. For those who want to avoid spending hundreds of dollars on a dedicated macro lens, there was a relatively cheap ($10) solution—using a reverse ring.

The exact optics of why reversing a lens turns small subjects large is complex. But put simply, when you mount a lens traditionally, the subject being focused on is larger and further away, and is reduced in size to be recorded on the camera sensor. When the same lens is reversed, small subjects are recorded at life size (true macro) or even larger from a much closer focusing distance. 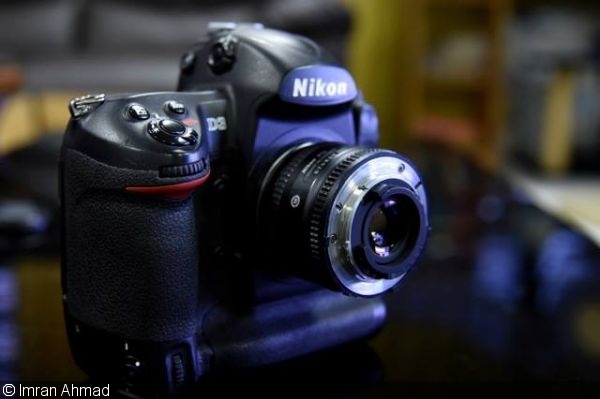 For example, a reversed 50mm lens (popular for RRM) produces a 1:1 ratio, which is considered true macro. Wider focal length lenses, such as a kit lens, can produce upwards of a 4:1 ratio. 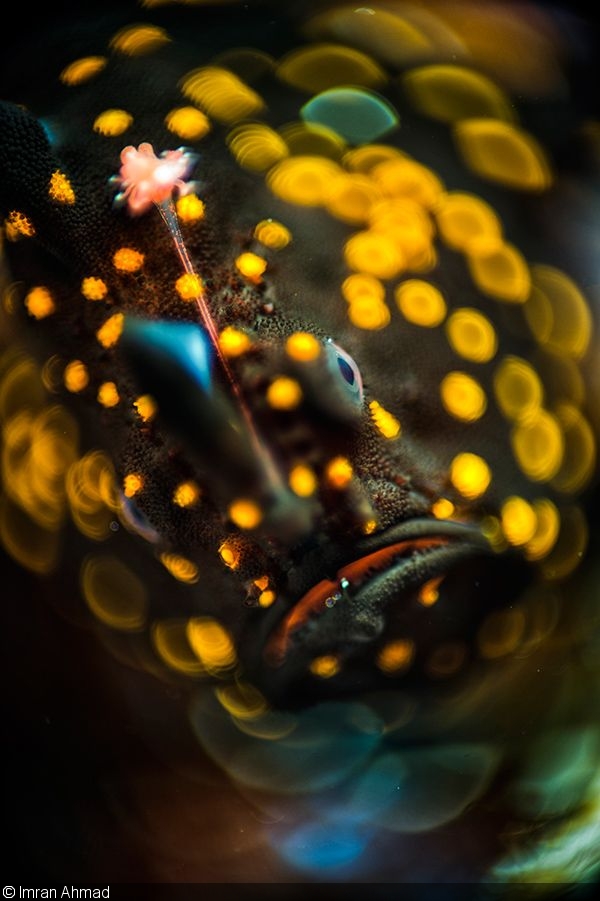 By reversing the lens, you not only have magnification, but a unique bokeh effect as well

When it comes to shooting super-macro underwater, the cost factor rises dramatically—and the appeal of using a reverse ring setup increases. A sample macro setup comprising a 105mm Nikkor lens, corresponding port and external macro diopter could cost upwards of $2,000. Compare that with the additional cost of a $10 reverse ring adaptor for the kit lens you probably already own.

Having said that, reverse ring macro should not be a photographer’s first experience taking images of small things underwater. There are several limitations when you reverse a lens. Because there is no longer an electrical connection between lens and camera body, autofocus, aperture control and metering are lost.

Thus, for underwater photography, RRM has transformed from an inexpensive introduction into macro photography to a unique take on super-macro subjects. 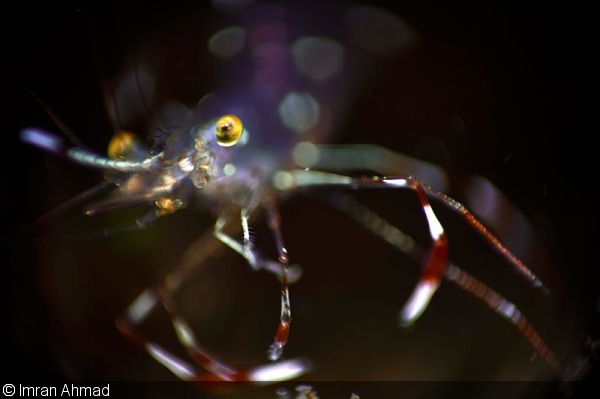 RRM isn't just a cheap solution: It produces macro images unlike any other

Okay, so you lose the ability to control aperture and use autofocus. So why would anyone want to reverse their lens for underwater macro? Simply put, RRM is fresh, and most importantly, it expands one’s options to get the desired effect. It’s a journey of discovery.

There are two distinguishing features of using RRM underwater. First, it produces extreme bokeh, which makes the photo feel like it’s spinning. The result is an image that seems to have movement instead of just being a static shot. The creamy background makes the foreground stand out even more than traditional bokeh. When shot at eye level and centered, it really draws the viewer’s attention to the subject. 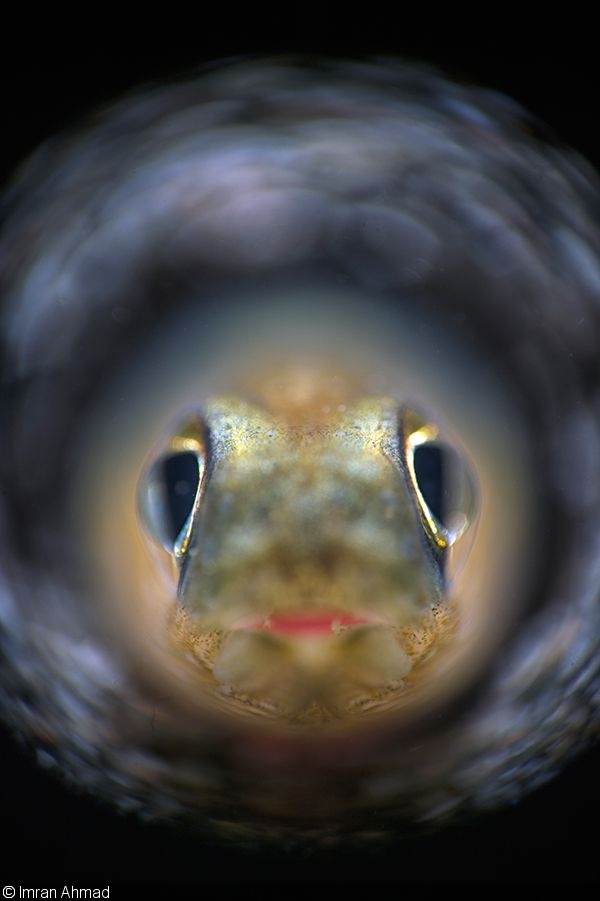 RRM isn’t for beginners. It’s quite challenging, but worth the persistence for the results it produces

The second main advantage is the dramatically decreased working distance. The use of a reversed 18–55mm kit lens can focus less than two inches away from the subject. The result is that even the smallest super-macro subjects can fill the frame as much, or even more, than with the use of a traditionally mounted lens and macro diopter.

In theory, any rectilinear lens can be reversed. However, underwater, we are limited with port compatibility and what lenses produce ideal combinations of magnification and minimum focusing distance.

Fortunately, the lens that checks all of the boxes is probably the one that came with your DSLR—the kit zoom lens. Using the kit lens, reversed with the adaptor, produces a range of magnifications, from 1:1 to as much as 4:1. You can also begin at a longer focal length (50mm) with a longer minimum focus, before going with the more challenging two-inch focus distance with shorter focal lengths.

Another popular lens choice for underwater RRM is the 50mm. Many shooters will already have a high-quality, fast 50mm f/1.8 (or f/2.8) for topside portrait shooting. Underwater, these wide apertures may be challenging to work with given the lack of depth of field—but they also produce super-dreamy bokeh. 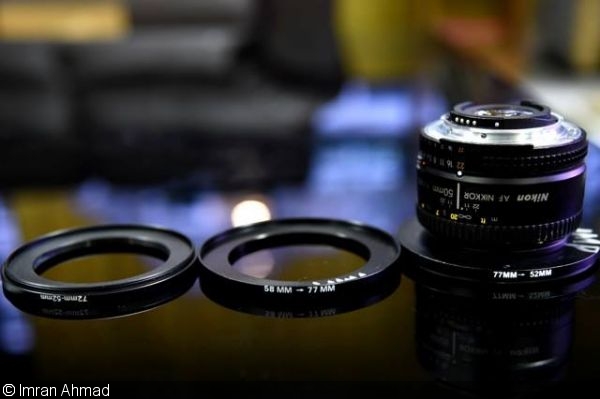 There’s a variety of reverse ring adaptors available for DSLRs

Shooting RRM underwater does present some challenges when it comes to exposure. The first is the lack of control over aperture. Here is a guide to getting started with settings for RRM:

Aperture: Most new lenses will default to their minimum (widest) aperture when not electronically connected to the camera. However, if the lens you are using has a manual aperture ring, consider setting it one or two stops from the minimum to add some depth of field back.

ISO: Because you’re shooting with a wide (or the widest) aperture, you’ll likely want to start with your ISO at its lowest setting to compensate. This can vary depending on the amount of available light (based on conditions and depth), but for anything shallower than 80 feet, a minimum ISO is a good start.

Shutter Speed: Again, because of all the natural light being let in from the open aperture, you’ll need a quick shutter speed to compensate. If you’re shooting with strobes, you’ll want to be near the maximum sync speed. However, as you’ll read below, I recommend shooting with continuous light, making it possible to use faster shutter speeds. 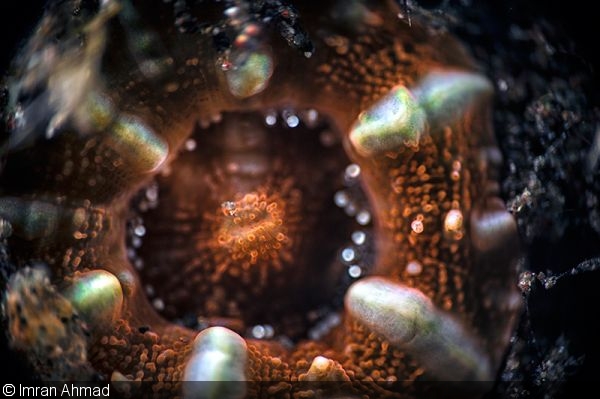 Focus Bracketing: Focus is arguably the biggest challenge of RRM, and requires loads of in-water (and out of water) practice time. The focus plane when shooting RRM is paper thin. Since your camera’s autofocus is disabled, you’ll need to use a form of “focus bracketing” to end up with pin-sharp images. To do this, you’ll want to gently move the camera slightly toward and away from the subject until it looks sharp—making sure to fire lots of images during this time. Since the depth of field is so thin, keep the camera movement minimal.

In theory, after repeating this process several times, you should have at least one image where the subject is perfectly focused. To make this process more efficient, shoot in continuous mode to increase frame rate. Also, consider mastering focus bracketing in a pool or controlled environment first. 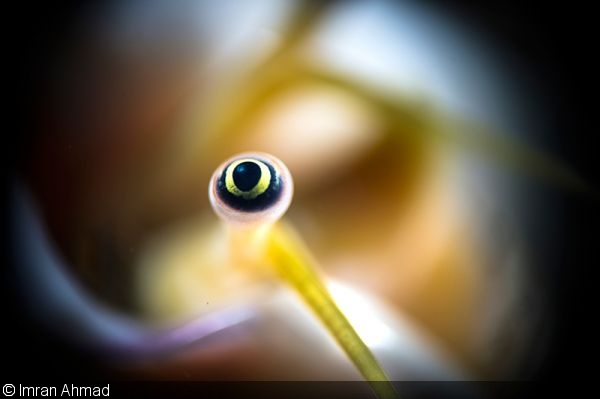 With no reliable autofocus, you’ll have to use “focus bracketing” to get the shot pin sharp

Continuous Lighting: Using a continuous light source (video light) maximizes the continuous shooting rate of the camera, without having to wait for strobes to recharge. This will make it much easier to use focus bracketing. Photographing so close to the subject also produces unique lighting challenges, and using a continuous light makes it easier to see how the positioning is adding shadows in real time. Since there is ample ambient light coming through to the sensor, powerful strobes are less critical. A video light adds the right amount of color and contrast lost underwater.

Choosing the Right Subjects: Especially when it comes to RRM, there’s no substitute for practice, and that means you should get out there and experiment! But some subjects work better than others when trying RRM for the first time. Start off with super-macro subjects that are stationary—that way the only motion will come from your camera during focus bracketing. Nudibranchs, small crustaceans, crustaceans and Christmas tree worms all work well as great beginner subjects. As you become more comfortable with focusing and lighting, you can move onto more challenging subjects like juvenile fish, blennies, cephalopods, and more. 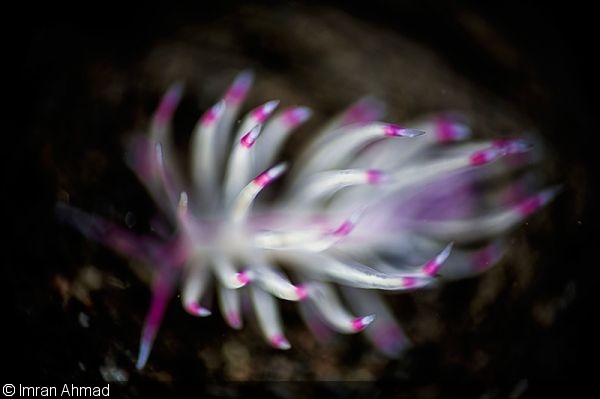 Common subjects, like this nudibranch, are a good starting option when you want to try RRM. Keep it simple!

One final reverse ring technique to try takes magnification and bokeh to another level: stacking two lenses together. With this setup, you are combining one forward mounted lens with another one reversed. What this means is you are able to control aperture through the forward mounted lens. Unfortunately, while you can adjust aperture with this setup, autofocus doesn’t work well and you’ll still need to practice manual focus bracketing.

Personally, I use both a 50mm lens for both the forward and reversed lenses, connected by a “male-male macro reverse ring” and a “filter stepping ring.” However, you can also try to use a traditional macro lens as the forward lens, and a reversed lens with a prime focal length of 50mm or less. 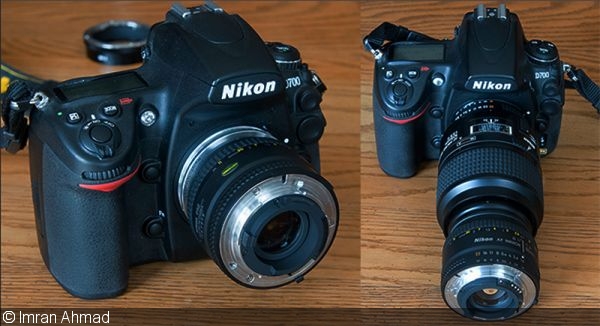 An additional benefit of using this setup with adjustable aperture is the ability to use higher apertures (f/2.8–f/5.6) with the addition of the vignetting effect that comes along with it. It’s not a look for everyone but adds a natural framing and “fisheye” effect that makes the subject pop off the frame. Remember, when shooting at more closed apertures, compensate with slower shutter speeds or higher ISOs. 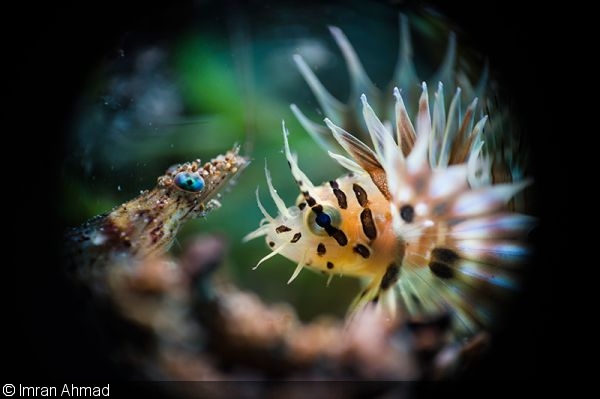 Sometimes, we have to go beyond just the status quo when taking underwater images. Reverse ring macro is not a new technique, but one that is reinvented and renewed when applied to underwater subjects. There are many options for lenses, stacking, and magnification—so it will take time to find out what works best for you.

Do not be discouraged by poor results at the beginning. It’s about experimenting with all your lenses and not just depending on stacking. Don’t focus on the end result, but on the process. You’ll be amazed at the images captured and the amount of fun doing it along the way. 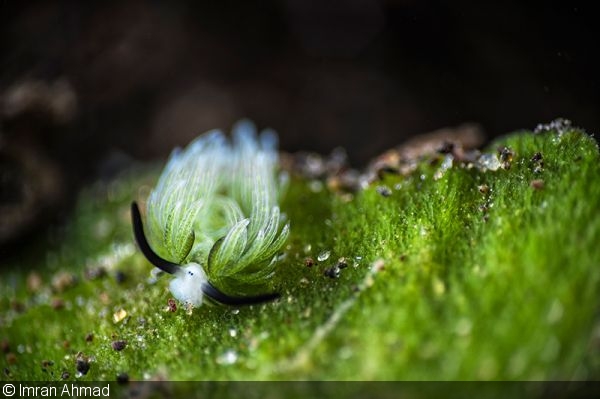