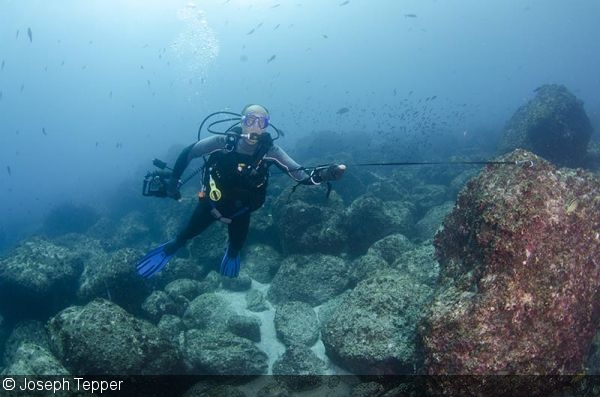 Currents: The ultimate double-edged sword of underwater photography. They often bring nutrient-rich waters and a plethora of life such as schooling fish, sharks, and bright coral. But they can also make it pretty difficult to dive in, let alone operate a bulky underwater camera.

That’s where a reef hook comes in. Instead of using your hands to grab onto something in strong current, the reef hook does all the work. When used correctly, this nifty tool can make unmanageable conditions workable for the underwater photographer, resulting in stunning images of current-ridden environments.

What Is a Reef Hook?

In its simplest form, a reef hook is a curved metal rod attached to a line, which is controlled by and/or mounted to a diver. It is noticeably different than a muck stick, which is a straight rod used for pointing out critters or stabilizing a diver for muck diving photography.

Reef hooks vary in size from 4 to 12 inches in length. The line also can vary in length, from just a couple of feet to several body lengths. Some reef hooks have a line on a reel or are just a sturdy long rope. (More below on choosing the right reef hook.) 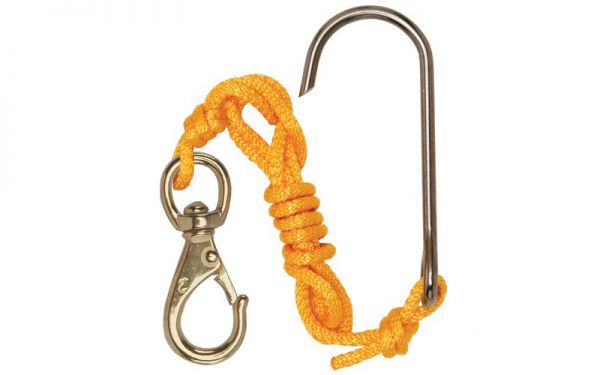 When to Use a Reef Hook for Underwater Photography

Reef hooks work best under two conditions. First, there needs to be a significant enough current that “hooking in” will result in stability. If there isn’t enough current, or the current is inconsistent, your line won’t be taught and you won’t have the advantage. Second, it needs to be a situation where you want to remain in the same spot for an extended period of time.

Take for example a drift dive in Palau. You are dropped off in the shallows where there isn’t any significant current—no reason to use the hook. As you drop down the wall, the current picks up and zips you along past colorful coral and beautiful reef scenics. There’s plenty of current, but it’s not a situation you want to stop in, as it is impractical and could separate you from the rest of the group.

After a while, the dive group approaches the famed “Blue Corner,” an outcrop where pelagics and massive fish schools aggregate in the current. Now, there’s plenty of current and you’ll want to stop to take images. The dive guide will signal to “hook in.” 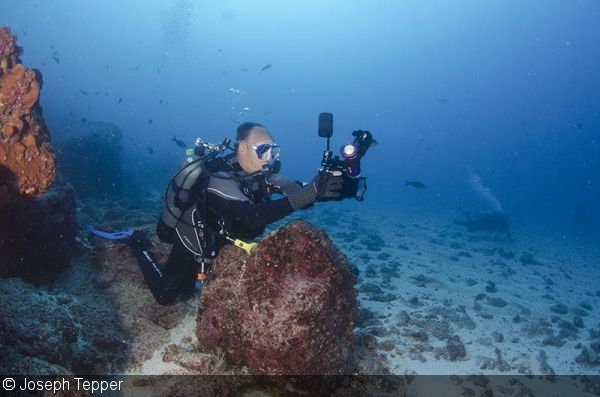 Reef hooks can be used on rocks, or dead coral, to minimize your environmental impact 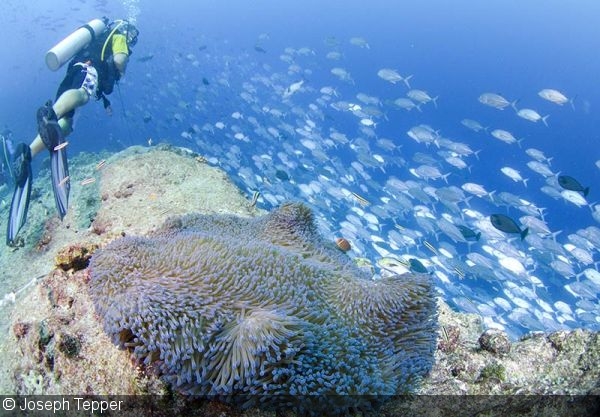 At Palau’s “Blue Corner” dive site, a reef hook is a must to stay in the same spot and photograph the action passing by

How to Use a Reef Hook

Before getting to “hooking in,” using a reef hook begins during dive preparation. Most reef hook lines are long, so you don’t want to get tangled in the line. The best way to avoid this is to use a “daisy chain” method to condense the line until ready for use (video here).

Once you’ve shortened the line, you can either keep the hook in your pocket or attach to a D-ring clip on your BCD. We suggest a hybrid method: Attach the clip to a D-ring near the waist (rather than the chest), and tuck the hook into a nearby pocket.

A common mistake is to attach the reef hook too high up on your BCD. You don’t want to attach it higher than your midsection—in strong current this pivot point will effectively tip you forward, making it difficult to take images. 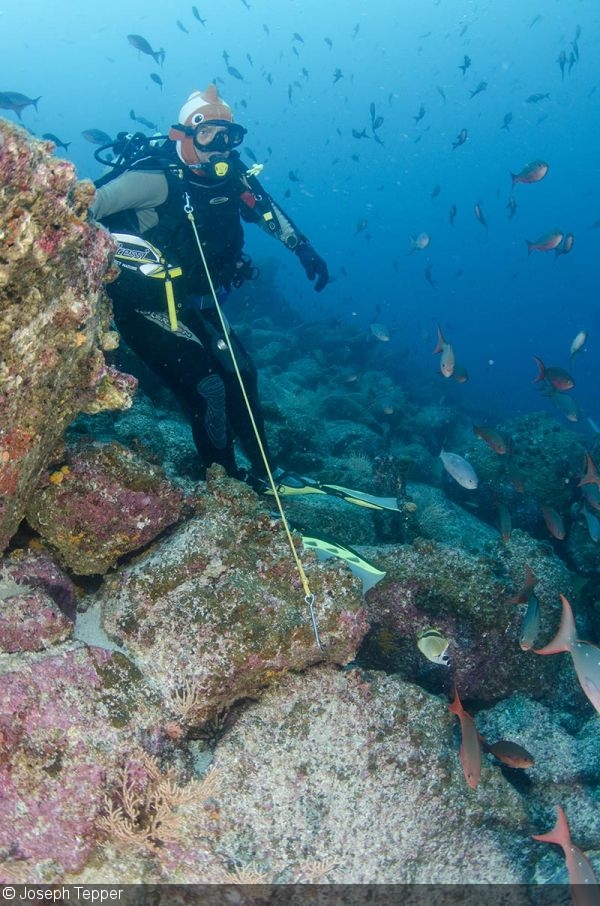 In the Galápagos, a dive guide inserts his reef hook into boulders and uses the rocks to stabilize himself in the insane currents

Once your dive guide signals it’s time to hook in at an iconic dive site like Palau’s Blue Corner or the Galápagos’ Darwin’s Arch, you can reach into your pocket and remove the hook and condensed line with one hand. Use the other hand to control your camera.

Now comes the most important part of the process—finding where to put the hook. First and foremost, you don’t want to hook into live coral, as this will damage it. Ideally, you want to find a rock or dead coral to hook into. Make sure it is sturdy: Some dead coral can be brittle, and rocky areas can shift. The last thing you want is for your reef hook to dislodge as you’re focused on taking great images.

Keep in mind you don’t have to use the entire length of your line. Ideally, you can cut the line to a single body length (4–6 feet) before the dive. But if this isn’t an option (i.e., if you’re renting or borrowing a reef hook), you can limit the length by using the clip to lock in the daisy chain at the desired length. 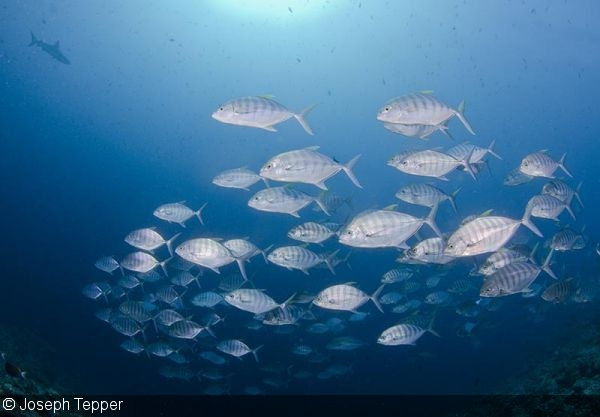 Once you’ve found a good spot to hook in and you’ve reached the desired length of the line, you can take your hands away. The current will have a parachute effect on you, pulling you back and making it feel like you are soaring in the passing water flow. Now it’s time to take some images. Here are some tips.

Use Short Strobe Arms: If the current is significant enough where hooking in makes the most sense, then you probably want to consider using shorter-than-normal strobe arms. Longer arms may flail about in the current and will be difficult to maneuver. Plus, as discussed below, you won’t always be able to get super close to your subjects, so using more natural light and less strobe light comes into play. If you typically use 12-inch arms, consider switching to 8-inch arms. 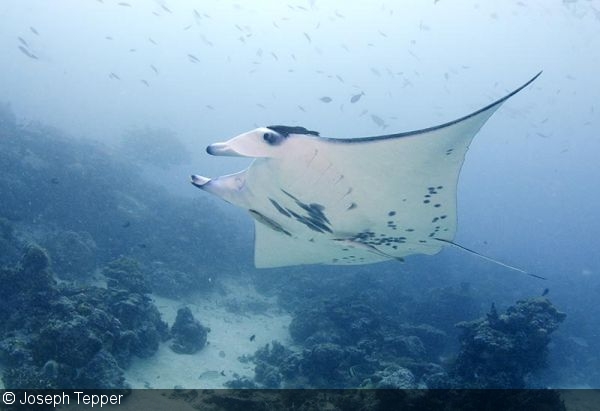 Longer Focal Length Lens: Using a reef hook will effectively eliminate your mobility. Yes, you can move if necessary, but this involves taking out the hook, moving where the current takes you, and hooking back in. For this reason, it’s wise to use a longer focal length lens to make up for the fact that you are at the whim of a current. For example, consider using a wide-angle rectilinear zoom instead of a fisheye.

Lighting: Reef hook underwater photography often pushes you away from your subject. Instead of being a couple of feet away from a shark (as on a dedicated shark dive), you will probably be at least a body’s length away. For this reason, it’s best to rely a bit less on strobe light and more on natural light by increasing your ISO and opening up the aperture. As an added bonus, this will also help reduce backscatter, which often abounds in nutrient-rich current conditions. 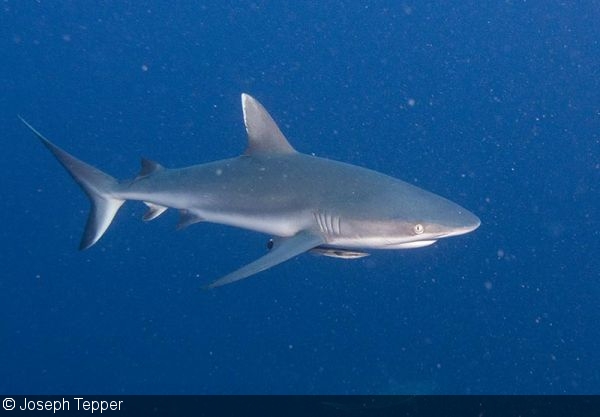 Beware of Bubbles: You may find an unlikely and unwanted subject in your images—bubbles. You might be able to stay in a single spot thanks to the reef hook, but your fellow divers’ exhaled bubbles will drift with the current. Try to place yourself ahead of the group in the current, or below the group, so that this isn’t a factor. Or, if you can’t a spot that’s bubble-free, make sure to take them into consideration when framing and timing your images. 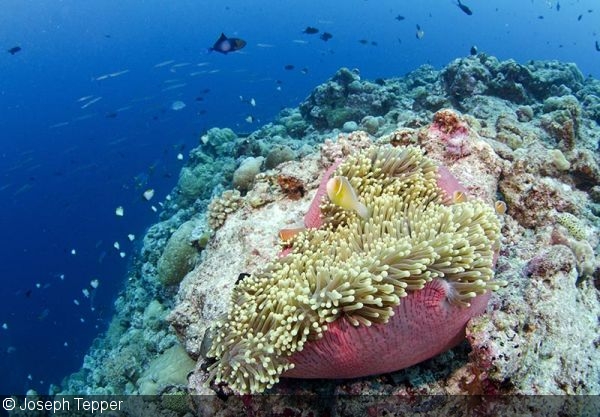 A classic scene at Palau’s Blue Corner: Getting in front of the divers to hook in makes sure there aren’t any bubble streams in the image

Practice Your Hooking: Let’s just say you don’t want the first time you try to use a reef hook to be in a ripping five-knot current at 100 feet. It may seem silly, but try first taking your hook out and playing with it on a dive with zero current: You won’t be able to feel the sensation of hooking in and riding the current, but you can get accustomed to the length of the line, attaching, and putting away the reef hook. Then, give it a shot in moderate current.

Safety First: If you’re using a reef hook on a dive, it’s probably not for beginners. Diving in current is no easy task—even when you’ve hooked in. The hook can dislodge and separate you from the group. Powerful currents have even been known to flood or remove a diver’s mask. You can’t always predict what will happen, so make sure to put your safety above taking awesome images. 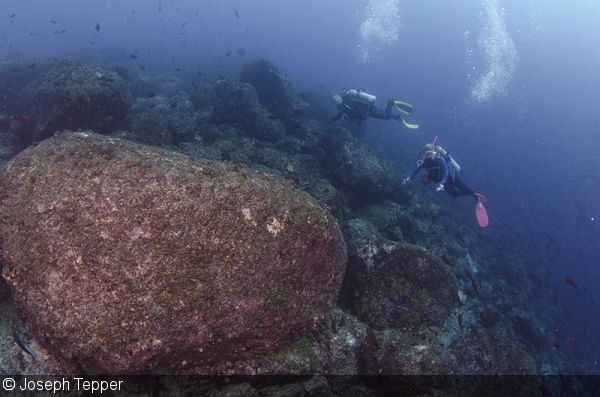 On this dive, the currents were so strong that the divers unhooked and just went with the flow to avoid any risks like losing regulators or masks

A reef hook can be a key piece of equipment in an underwater photographer’s arsenal, especially in strong currents. With the thousands of dollars in photo gear you likely lug around, it’s smart to invest in a quality reef hook to bring with you.

While you may not need to use it for most destinations, it can be a lifesaver—especially when your liveaboard or dive operator does not provide the opportunity to rent or borrow one. Freeing up your hands is a key step in taking better images in current-ridden conditions. 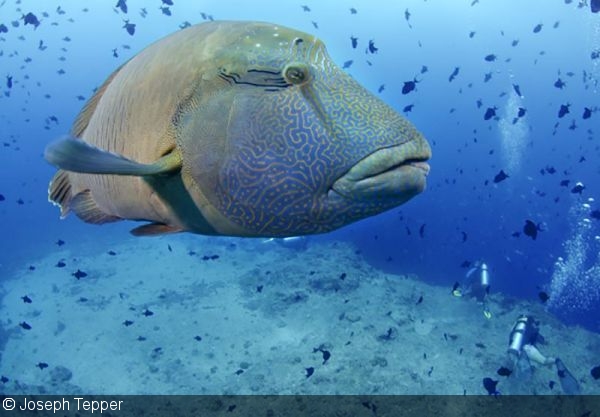 Hooked-in divers remain below at the “Blue Corner,” photographed with a Napoleon wrasse from above