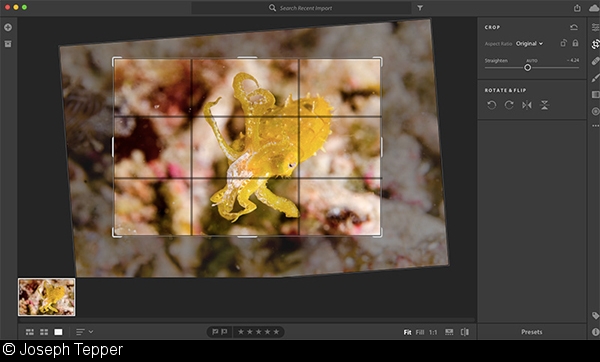 Learn how the right cropping technique can unleash your images’ potential

In an ideal world, your images would be perfectly framed the moment you snap the shutter. However, out of almost any imaging discipline, underwater photography is perhaps the most prone towards imperfection—and so editing becomes such a valuable tool.

No editing tool is as powerful as cropping. The right crop can dramatically change how an image tells a story: It can accentuate a photo’s strengths, and it can fix unsuccessful compositions. Moreover, our modern digital sensors give us enough megapixels to allow us an impressively wide latitude to crop images and still have sufficient resolution remaining. While cropping might come natural to some, here’s a guide to making the most of this formidable tool.

Every image—be it still or video—has a set aspect ratio. This measures the ratio of the width to the height of the image. In still photography, the standard ratio is 3:2, which dates back to 35mm film cameras with 24mm x 36mm sensors. This ratio continues today in the sensors of both full-frame and cropped-sensor interchangeable-lens cameras.

As such, the vast majority of photos you will see are presented with a 3:2 aspect ratio, as that is the standard setting. For example, a landscape-oriented image may have a dimension of 6000 x 4000 pixels, while a portrait-oriented photograph might have a dimension of 6" x 9". The numbers can represent pixels, inches, millimeters, or any other unit, as long as the ratio doesn’t change. 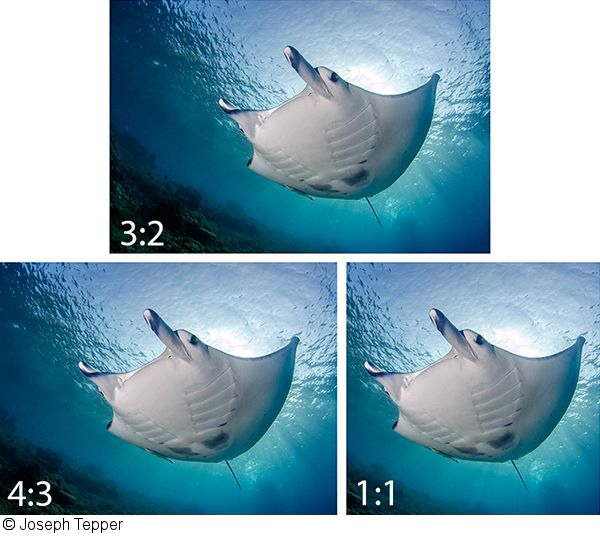 The same image can have a completely different feel when cropped at different ratios. The 4:3 and 3:2 ratios are common in compact/mirrorless cameras and DSLRs, respectively, while the 1:1 is popular on Instagram

There are a few other aspect ratios worth noting. The 1:1 ratio is a square image with roots in twin-lens reflex cameras, but it is popular today largely because of its ubiquity in social media outlets like Instagram and Facebook. If you’re shooting with a compact or mirrorless camera, the standard aspect ratio may be 4:3—again corresponding to the sensor size—but many photographers adjust the ratio back to 3:2.

You can set your aspect ratio in your camera settings. But even if you want to change the aspect ratio after taking the image, post-processing offers the option to automatically crop at a given ratio. In Photoshop and Lightroom, the Crop tool features a pull-down menu with a selection of preset ratios such as 3:2, 1:1, 16:9, and 4:3. As well, you can customize your crop ratio if needed for a specific purpose by manually entering the numbers. 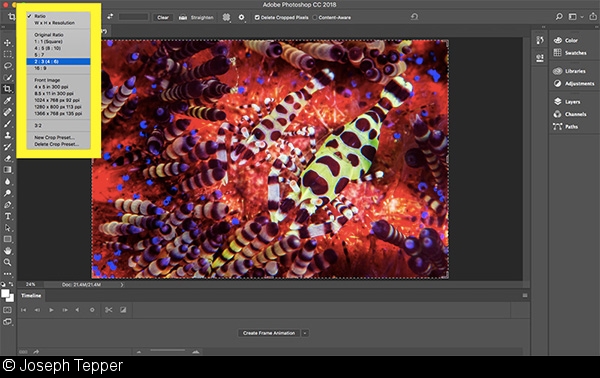 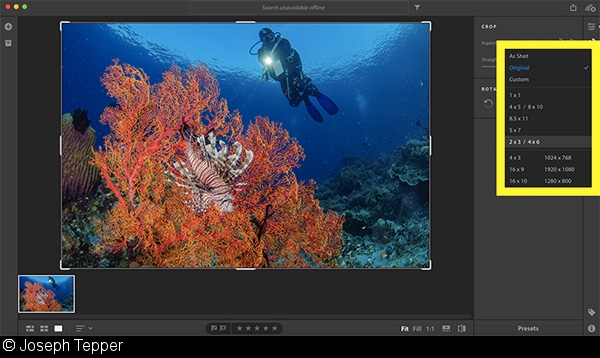 There are two ways to orientate your photos: landscape or portrait. Landscape images are longer in width than in height, while portrait images are longer in height than width. In general, it’s best practice to determine your image’s orientation in-camera—meaning that you rotate the camera 90 degrees to change whether the picture is captured as a landscape or portrait. Determining what orientation is best for a certain subject or situation is an entirely different subject; see “Image Orientation: Landscape vs. Portrait in Underwater Photography.”

When it comes to cropping, the vast majority of your images will retain the same orientation. This is largely because how you initially framed the shot should be represented in your final image. However, there are some instances when using the Crop tool to change the orientation has its advantages.

The more likely situation is cropping a portrait image out of a picture originally taken as a landscape. This is useful when the subject is bullseyed in the center of the image with distracting negative space to the sides. Depending on your camera’s resolution, you may even have enough pixels to create a portrait-orientated magazine cover shot out of a horizontal photo.

Some landscape images are suitable for cropping down to a portrait ratio, such as this sargasso frogfish with its reflection at the surface

Cropping a portrait image into a landscape-orientated one is rarer because underwater photographers tend to take fewer portrait images in general—and when we do, it’s usually quite purposeful. However, if you’ve taken a portrait-oriented image and find that the subject is too small and dead-centered around a boring background, cropping as a portrait can really make it stand out.

In both of these cases, you’ll be cropping significantly so it’s important that the subject is in perfect focus. A subject that’s slightly blurred in an original image may be passable—but changing orientation will result in a much closer crop and will likely not hold up to scrutiny.

Occasionally, images taken in portrait orientation will be suitable for cropping as a landscape, such as this tight frame of a great white shark 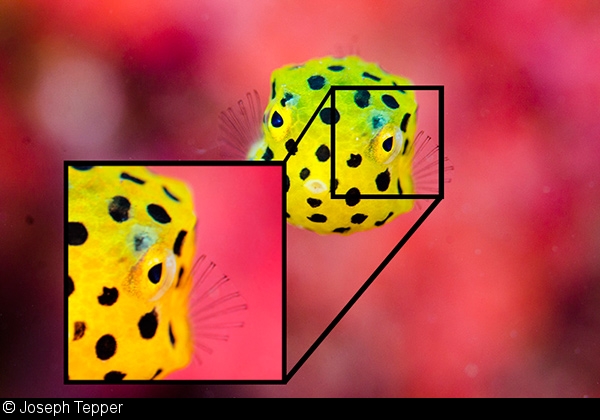 If cropping down significantly, make sure that the image remains sharp. This boxfish looks sharp in its original form, but cropping down to 100 percent shows it’s not quite in focus

Why crop a photo at all? The easy answer: To fix mistakes you’ve made while taking the picture. The most obvious “mistake” is failing to get sufficiently close to the subject—something that even experienced photographers do. Sometimes, failing to fill the frame with an animal can be attributed to a shy subject or a space too tight to get close. Cropping to make the subject larger in the frame is the easiest—and most common—use of the tool in underwater photography. 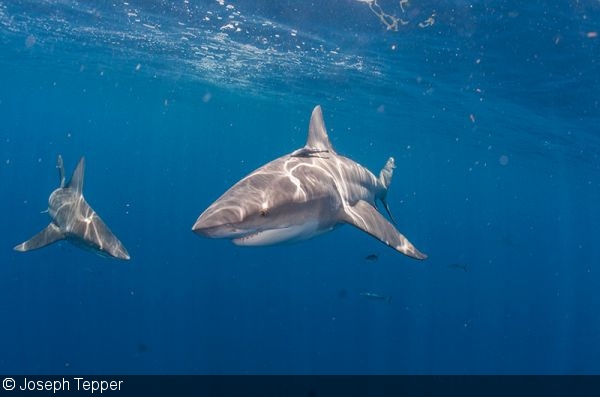 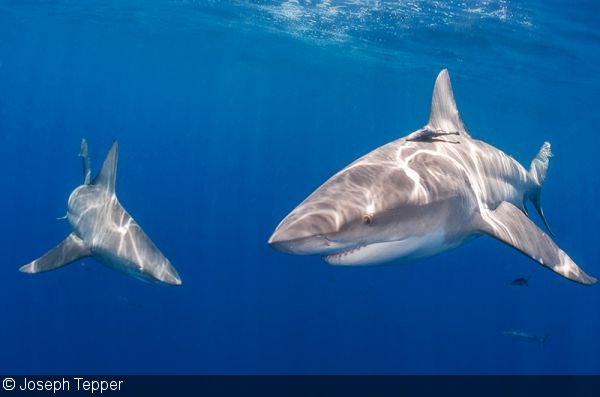 Amongst beginner underwater photographers, there is a tendency to place the subject in the middle of the frame. However, images are more intriguing when following the rule of thirds and other basic composition principles. Fortunately, you can use the Crop tool to make your images better adhere to these rules.

There is an option in Photoshop and Lightroom to display a rule-of-thirds grid when in crop mode. The simple goal is the same when framing an image in the camera viewfinder: Align critical points of the image (subject, horizon line, etc.) with the lines and intersections demarcating thirds of the photo. 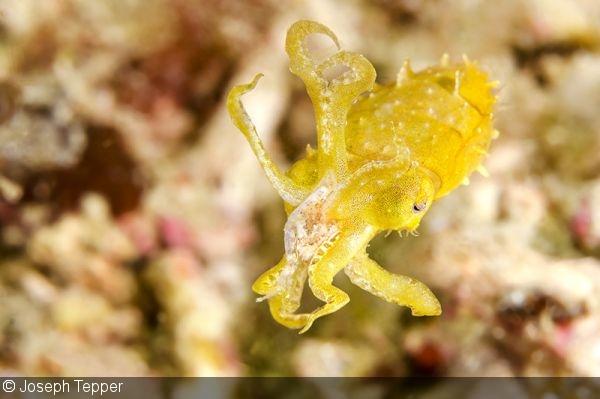 Here, the image has been cropped so that the eye of the cuttlefish lands on an intersecting point of the rule-of-thirds grid

It’s only natural for divers to focus on the subjects and not what’s in the background. But as photographers, the background (or negative space) in our images is just as important—if not more so—than what’s in front. Experienced underwater shooters will often look for interesting backgrounds before searching for subjects.

While cropping can’t change what you’ve included as the background, the tool is useful for fine-tuning a key consideration of composition: balance. We cover the topic of compositional balance in depth in our “Advanced Composition” article, but the general idea is understanding the importance of balancing the various weights of components in an image. These can include colors, light, and shape in both the foreground and background. 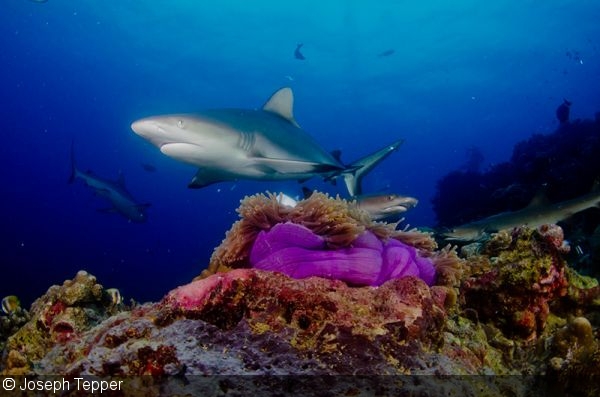 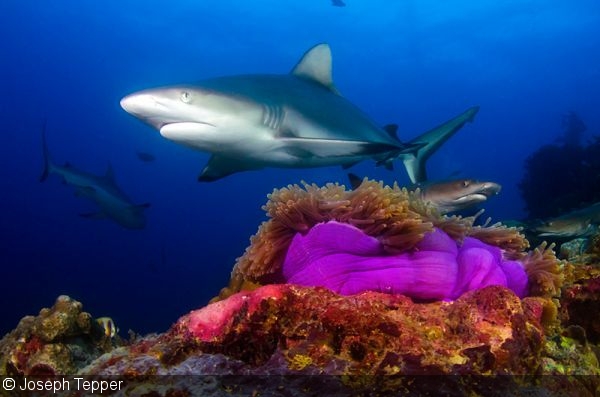 A slight change makes a world of difference: The crop of this image is designed to bring more balance between the blue background and the colorful foreground. It’s also tilted slightly to accentuate the diagonal line of the sloping reef

The balancing act can be difficult when looking through the viewfinder at 100 feet underwater—and takes many years of practice to even come close to mastering. We’ve already discussed one method of using the Crop tool to balance compositional elements: By cropping in, you not only better fill the frame but also provide more equality between the subject and the background.

In most images—especially wide-angle shots—there are two primary visual elements: Those that are lit by ambient light and those illuminated by your strobes. Try using the Crop tool to frame the scene so that there is a balance between the often-colorful strobe-lit elements and the blue background. This same technique can apply to macro images as well. 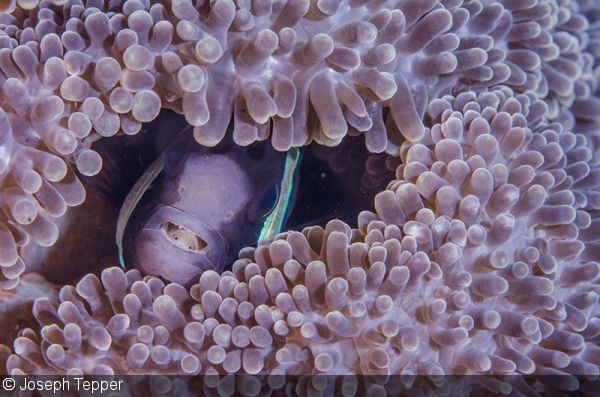 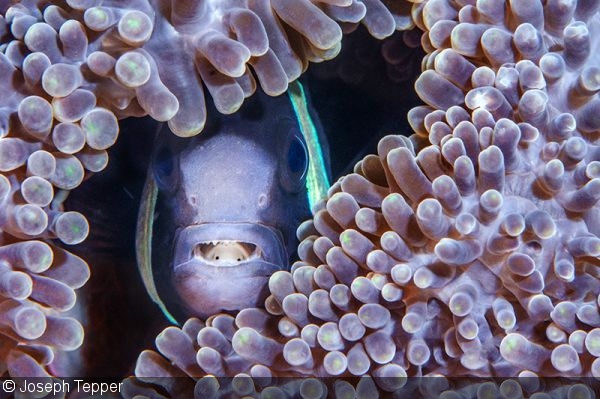 More balance was needed between the anemonefish and the anemone background, so I cropped in and also tilted the frame slightly to emphasize the diagonal line of the fish's hole

Cropping is another weapon in the underwater photographer’s armory, so it’s often a highly personal and artistic choice. That said, there are some basic rules to follow to produce visually appealing images.

Leave Room for Subjects to Swim

It can be tempting to crop way in on a subject so that it really stands out in an image. But sometimes, you can crop in too tight so that the frame feels crammed. This tends to happen most often with swimming subjects—giving the “fish tank” feel that the animal is stuck in the frame. To avoid this, make sure to leave at least a third of the image’s negative space in the direction the fish is facing to give it “room to swim.” 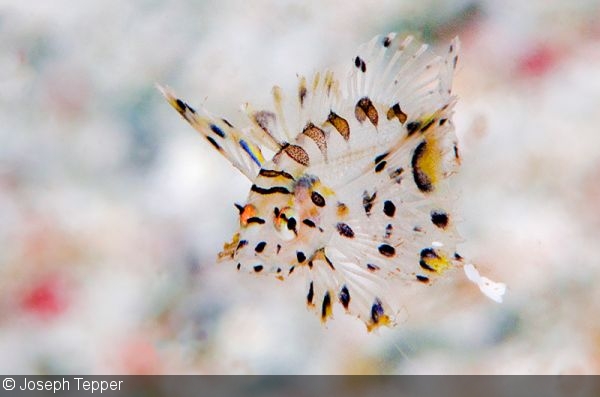 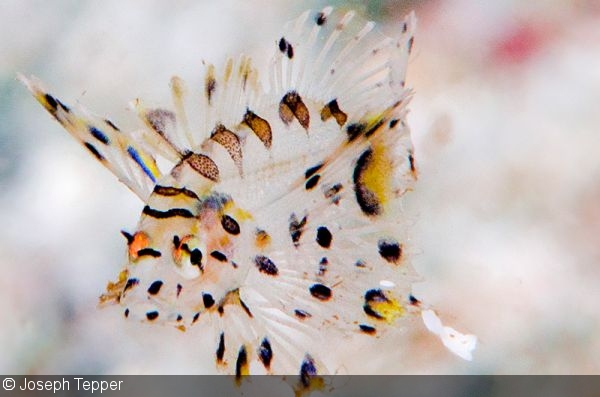 Cropping in too close can make it seem like the fish is trapped. Try leaving a third of the negative space in front of the subject to give it some swimming room, so to speak

Crop Out Boring or Busy

Some of the most powerful underwater images are remarkably simple in composition. Distracting and/or boring backgrounds can ruin an otherwise strong photo. If possible, use the Crop tool to selectively limit as much of these elements without making the frame too tight on the subject. 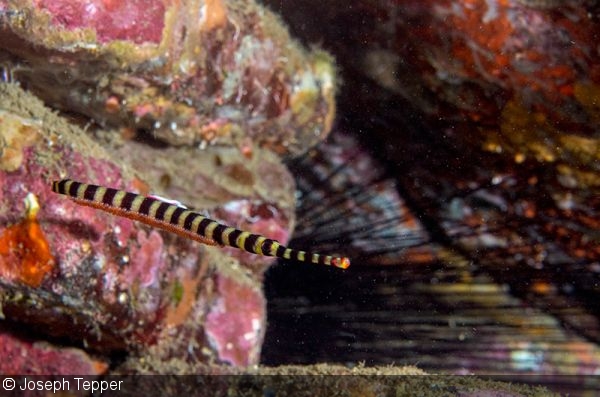 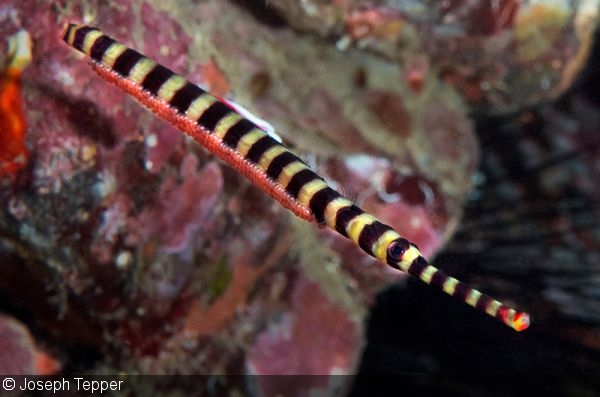 This pipefish is incredibly colorful, but blends in amongst all of the elements. Cropping out most of the busy background and tilting the composition really helps the subject stand out

Diagonal or leading lines transform a boring image into a more dynamic one. Ideally, you can accomplish this by tilting your camera when shooting. But if you lacked the foresight to do so, no worries: Look for images with straight lines and rotate the crop (up to 45 degrees) to place them on a diagonal. 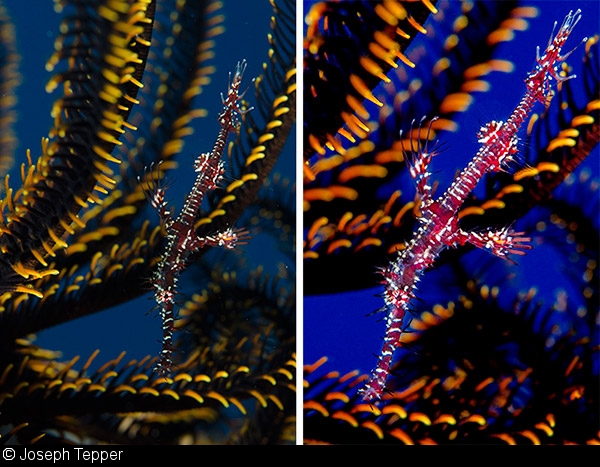 By cropping in and rotating the frame by about 25 degrees, the natural S-shape and diagonal line of this ghost pipefish has been accentuated

There are other situations where you’ll want to make sure the lines in your image are perfectly parallel to the sides of the frame. A prime example is an image featuring a horizon or waterline: Leaving this tilted can disorientate the viewer. Similarly, head-on portrait images of animals should aim to have the eyes of the subject on a level plane. Use the lines created by the rule-of-thirds (or grid) feature of the Crop tool to straighten such images if need be. You may even be able to use Photoshop’s Content-Aware Crop tool to automatically fill empty areas of an image resulting from rotating a crop. 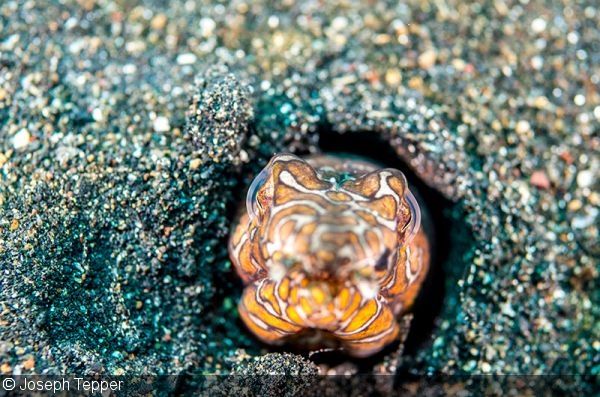 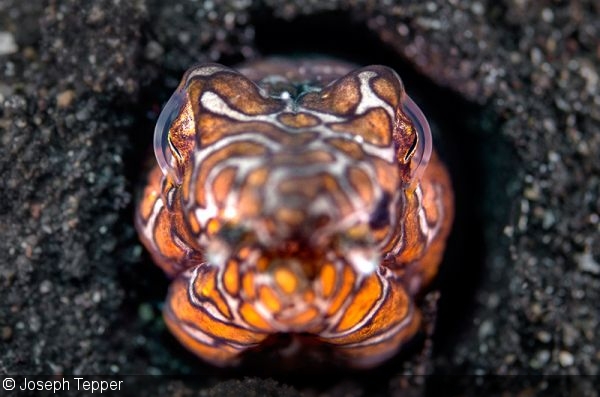 In addition to tightening the crop, the frame has been rotated so that the eel’s eyes are level for increased symmetry

One day, you will take images that are framed and composed perfectly. Until then, the Crop tool is your friend. Try not to think of cropping when taking an image as this will prevent proper planning. Rather, judicious image cropping is a way to fine-tune composition to make images even more compelling.