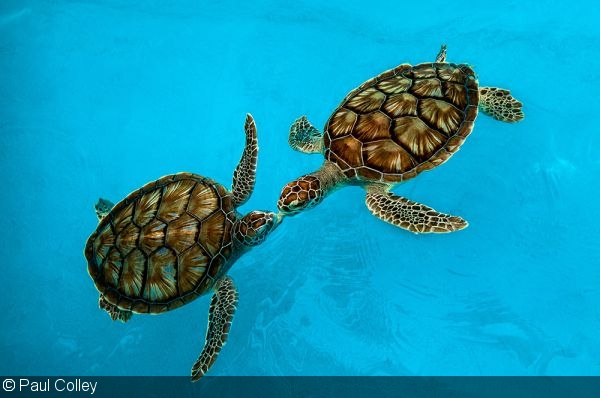 It’s not just cameras, lenses and housings that make better pictures. Technology has its place in the photography armory. But most of us can make better pictures with what we already own. And I mean much better. This article will explain how, developing some well-recognized ideas about basic composition. Just a little more thought about this could make you a better photographer. 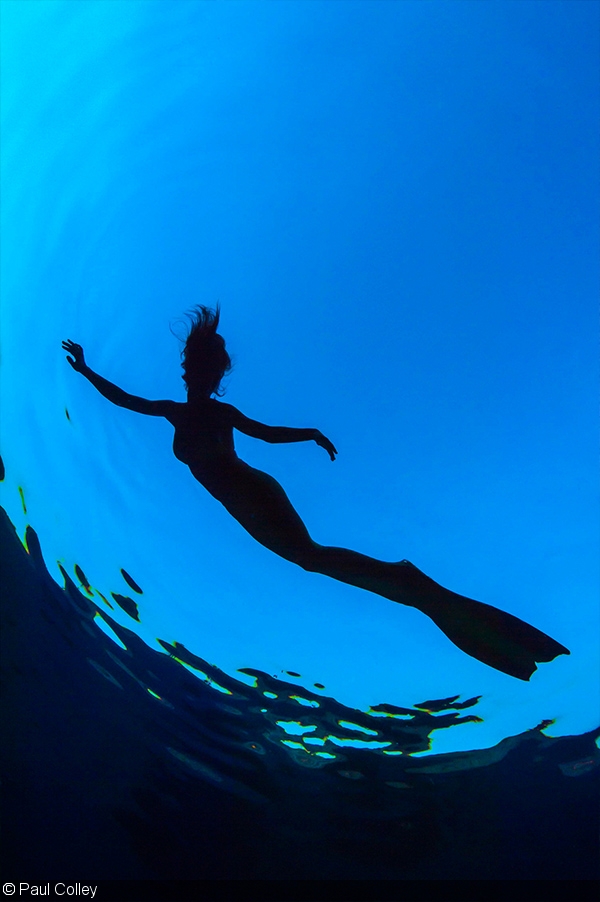 What Makes a Winning Image?

When I talk about winning images, it’s about winning the hearts of people you wish to engage. It could be friends, family, peer photographers and for sure—if you aspire to it—magazine editors and competition judges. You’ll be listening for that response we all love to hear: “Wow!” This is what I think makes winning images:

A winning image captures many things. It can be a new viewpoint of a common subject, or a fleeting moment in time, or the perfect rendering of exquisite underwater geometry, shapes and symmetry. Most winners have high contrast in light or color, a clear subject and careful balance between the different visual weights in the frame. All have one thing in common: the wow factor—an ability to strike at the viewer’s heart and engage them emotionally.

Make sure you have mastered your camera. Unless you know how your camera and lighting system work, you cannot progress easily into advanced composition. Develop the mental and muscle memory that allows you to work with your camera underwater without overthinking.

Read books, go on courses, practice with your gear—do whatever it takes. But when you are proficient at taking a picture, note Ansell Adams’ wise words: “You don’t take a photograph, you make it.” That’s where composition takes center stage.

A Model for Underwater Composition

In considering composition at a deeper level, I use the model below. In the following sections, we’ll consider the three main elements in the model: light, contrast, and balance. 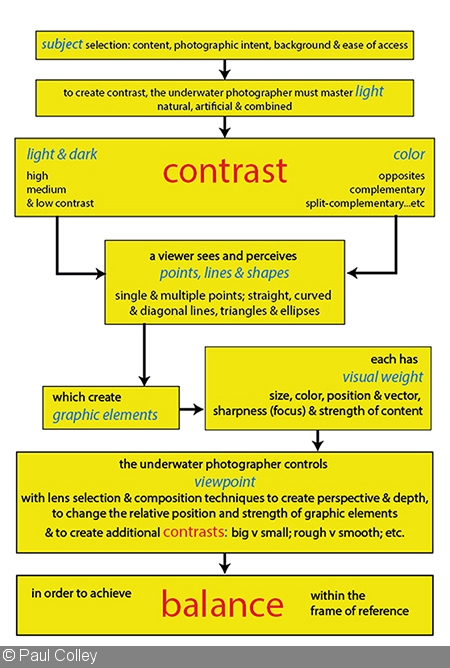 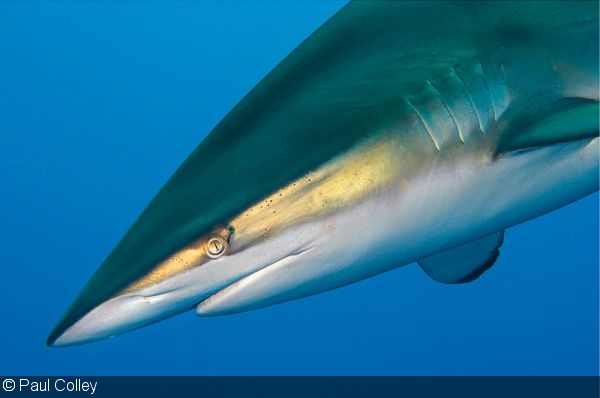 Understanding and capturing light is something that all good photographers master. You must control the relative direction, intensity and quality of light. It shapes color and contrast. These are your basic compositional tools.

Light can be natural or artificial, hard or directional, soft or diffuse. Diffusers on your strobes create softer light, good for bringing out large patches of vibrant color. Take the diffusers off and use only one strobe (or differential power with two strobes) for stronger directional light to generate shadow and details. Above all, always note the direction of natural light: put the sun behind you if you want color in a big scene; or from the side if you want to emphasize shadows, shapes and texture. Light is the photographer’s master tool with which, using lenses, apertures and shutter speeds, we paint color and detail into our images.

“Nothing exists without its opposite.” At its most obvious, contrast it is the difference in brightness or color that makes an object distinguishable to the eye. But viewers of your images need to work out what they are looking at quickly, or they will disengage. Contrast in light and dark makes it easier for them. Color contrasts are similar. We need high contrast—in light, color or both—set against lower contrast in the rest of the image. Otherwise, we generate a level of overall detail that begins to clutter the principal subjects.

Try looking at small thumbnails of your images. If the main subjects are not obvious, they may lack sufficient contrast. Silhouettes and monochrome images are often the best ways to see high contrast in light. Consider the two images below of a freediver and a shipwreck. Both were deliberately shot into or across the light for high contrast and note how well the shapes stand out. You can also use a wide aperture to blur background detail. Another possibility is using a small aperture to get a dark background and letting flash light pick out the foreground subject color. 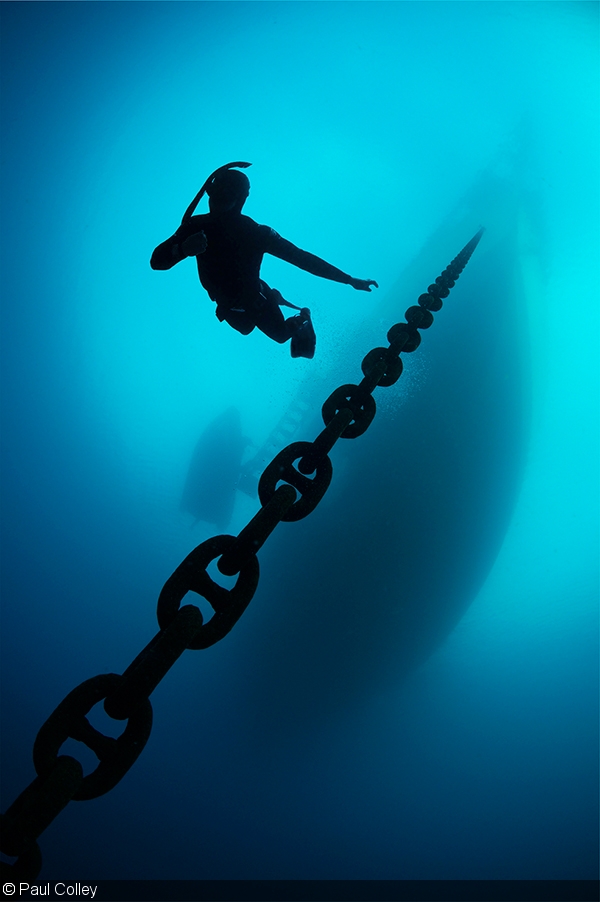 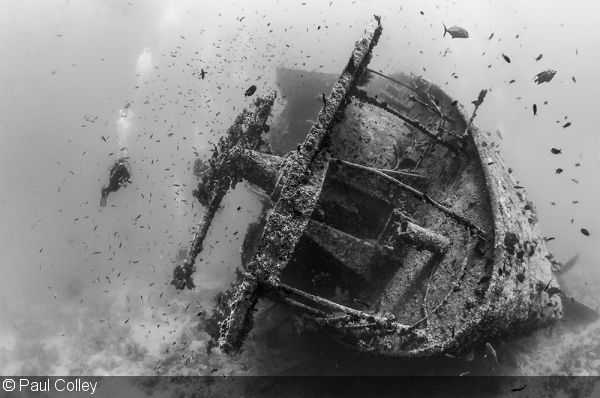 There are other subtle contrasts that you can bring to your images. People appreciate these sometimes-understated and even subliminal contrasts, for instance, of texture and density or of size and position. Photographing a smooth subject on a textured sponge background, as in the eggshell cowrie image below, is one example. Or capturing a decisive moment like that in the barracuda image, which contrasts one barracuda set against many and heading in opposite directions. It grabs attention and achieving this particular contrast was a function of timing; nailing the peak of the action defined the contrasts of direction and scale in this image. 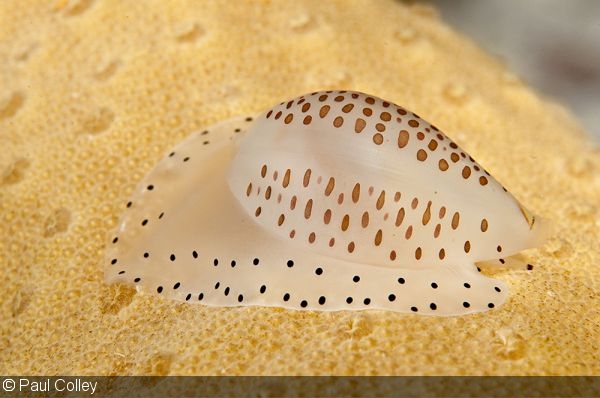 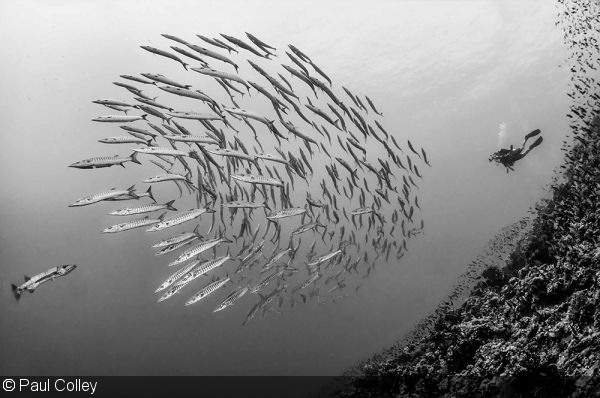 The smooth cowrie contrasts nicely with the textured sponge, and the barracuda image has contrasts of size and direction

The other master organizing principle for composition is balance. Different elements of an image have different visual weights, which depends on size, color, and position of objects within the frame, their implied vectors, sharpness (focus), and strength of content. An implied vector is the suggestion that something has a direction, for example, the way fish are pointing (they need space to move into), or the direction that a ship wreck lies (it has a vector from stern to bow) or even the way a diver or creature is looking; viewers of the image will tend to follow that vector as they scan the overall picture.

Look at the image below of a coral-encrusted motorbike in the hold of a ship. It has three strong weights distributed along a dominant diagonal line: the front wheel of the bike (large size, sharp focus and high detail); the yellow fish (strong color and a clear implied vector); and the blue water (a moderate-sized bright color patch). The water color and fish colors contrast well, so between them they have visual weight that naturally balances the dominant bike and its big front wheel. 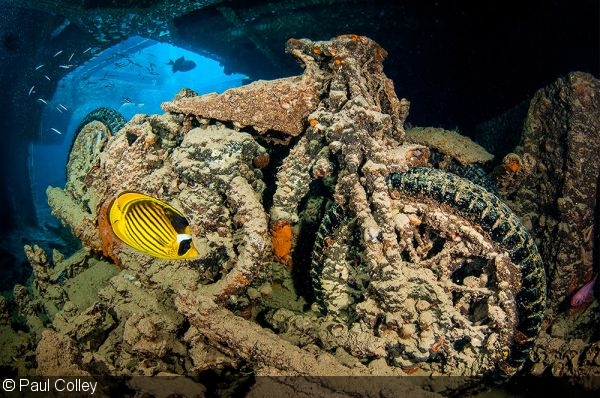 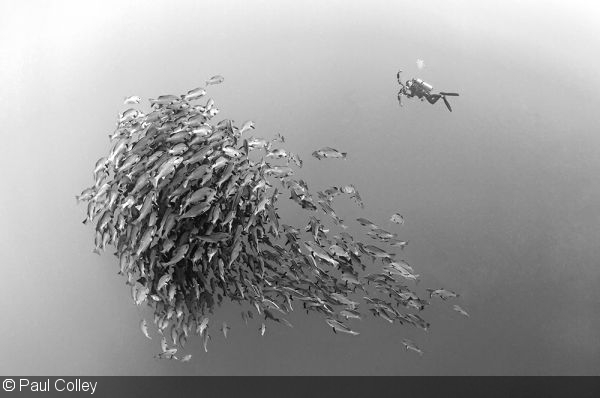 Balance: The highest visual weights in the top image are the motorbike front wheel, the fish and the patch of blue water. In the bottom image, implied vectors and positions in the frame allow the diver and fish school to balance each other

The general trick is to size up what you see through the viewfinder as the main compositional elements and move your relative position in the water to distribute these weights evenly around the frame. It’s not easy, and immediate image review underwater is invaluable, because you may not see some color patches until they have been lit by your artificial light.

Color has high weight in an image. When an image is balanced, it has a feeling of stability. But you can also deliberately unbalance an image, for instance, by distributing lots of visual weight on one side, to create tension. An example might be to have a diver looking out of the frame, with no obvious other subject in the picture. The viewer cannot see what the diver is looking at and that creates tension; if the diver’s eyes are wide open, it might be something exciting or dangerous. Imagination comes into play.

Good contrast and balance give a better chance of achieving the wow factor. But this also has a lot to do with subject selection. We get bored looking at the same type of underwater pictures; there are millions out there. So novelty is a great commodity. It could be a rarely-photographed subject, but if we depended on rarity alone to make images work, we might struggle. You can also photograph common subjects in new ways. 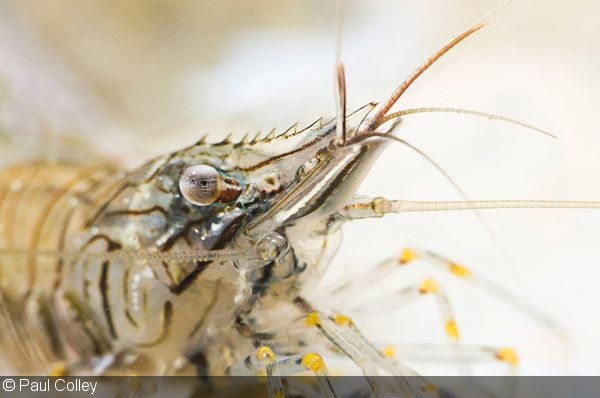 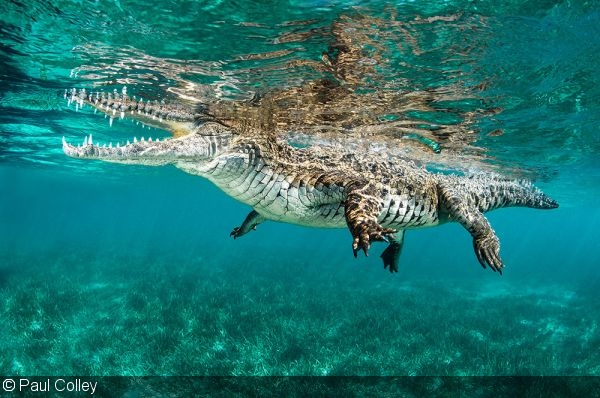 Novelty and viewpoint can have high value in composition. Saltwater crocodiles are difficult to photograph and are therefore novel. But even a very common subject at high magnification can create viewer interest. The common shrimp works well at super-macro using high key techniques and natural light for an uncluttered canvas—most people tend to use flash and dark backgrounds

Experiment with different lenses, lighting and viewpoints, and try to be different. Macro (and super-macro) is one way, because the possibilities are endless. But you will still need vibrant colors and interesting shapes to grab attention: contrast and balance will still apply.

Above all, spend time studying photography online and offline to improve your knowledge of composition; you’ll get further quicker than by worrying about owning the latest cameras, lenses, housings and strobes. Consider the ideas here and take time thinking about and analyzing the pictures you come across. With luck, you’ll soon be taking more winning images of your own.

About the Author: Paul Colley is an award-winning underwater photographer and instructor. His book Winning Images with Any Underwater Camera was critically acclaimed by the Royal Photographic Society, which awarded Paul a distinction for the contribution that his book made to the research, education and application of underwater photography. 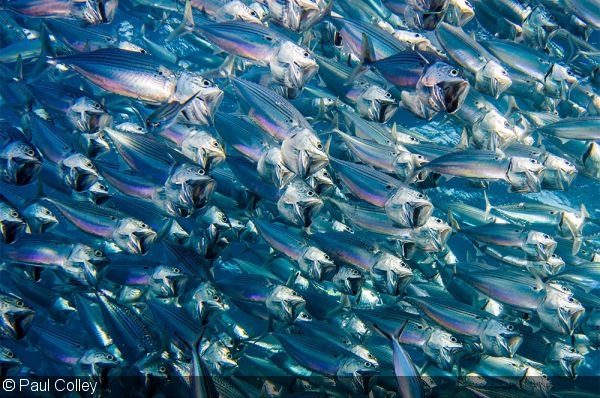 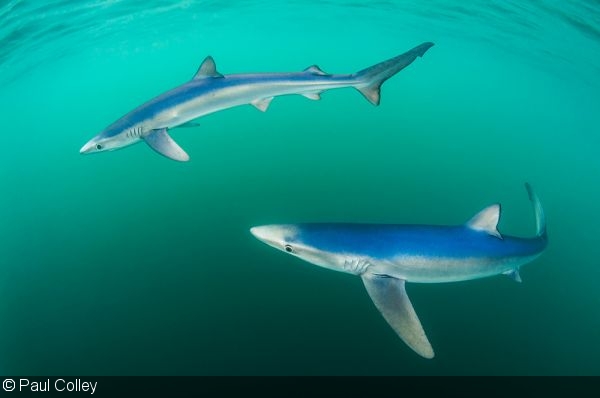