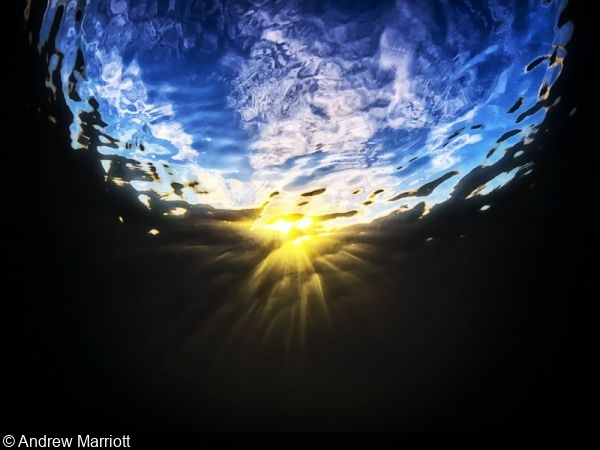 Snell’s Window is one of the coolest underwater phenomena you’ll find. It is a trick of physics that allows you to see everything above the surface through a cone of light with a width of about 96 degrees. The reason this happens is called refraction. When light enters water, it bends due to something called Snell’s Law. This law states that light (or other waves), will change their angle of incidence when passing through the boundary of two different mediums. In this case we are talking about passing from air into water.

The physics behind Snell’s Window, which was named after the Dutch mathematician Willebrod Van Roigen Snell (1580–1662), a professor of mathematics at Leiden University in the Netherlands—but you knew that

On your next dive trip, wait for a day with calm conditions to try this experiment. While hanging on the anchor line at the end of a dive look up during your safety spot. At a depth of 10 feet, you will probably be a little too deep for a perfect window, but slowly ascend and keep looking up. Between three and six feet, the entire surface, from horizon to horizon, will be clearly visible! Aside from the amazing physics at work, think of all the incredible photographic opportunities this presents! Here, then, are some techniques to keep in mind while shooting using Snell’s Window. 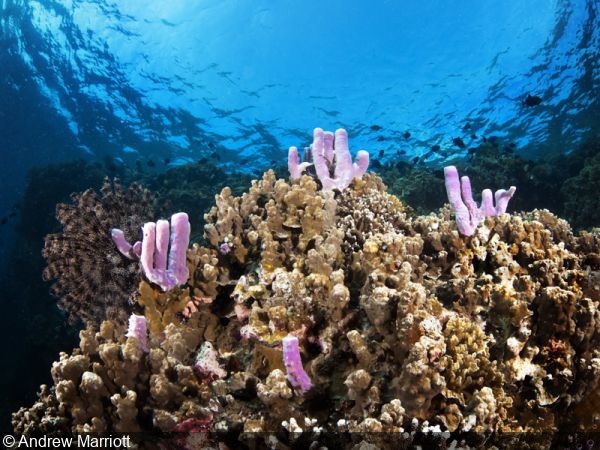 If only there had been some clouds the day this was shot!

Shooting Snell’s Window offers some amazing possibilities—like an over/under shot totally underwater—but it also presents some challenges. The one thing we can’t control is the weather conditions. Ideally, the surface should be calm, although some light wave action can create a nice effect. The other thing we can’t control is the turbidity of the water. To get the most out of the window, you need clear water. It doesn’t need to be blue, but it does need to have at least six feet of good visibility to create an effective shot.

You also need to consider the angle of the window and the equipment you’ll be shooting with. When you hit the ideal depth, you should be able to look up and see horizon to horizon. The entire 180 degree field of view is refracted and will come together in a cone of 96 degrees. To shoot the entire window, you will need a lens that can handle those requirements.

Ninety-six degrees is not very wide, considering that most fisheye lenses are pushing 160 degrees; the problem is the short side of your frame. If you shot a square full-frame sensor, you could make do with almost any lens (but not many of us are shooting that). To get the entire circle in a frame, you are going to need something around 12mm on a full frame, which is roughly 6mm on a Four Thirds sensor. You’re going to have trouble finding a lens like that, so you will need to accept that the top and bottom of your circle is going to be slightly cropped in a Four Thirds camera. All the photos in this article, with one exception, were shot on a Micro Four Thirds mirrorless system using an 8mm fisheye—so you can indeed see the crop. 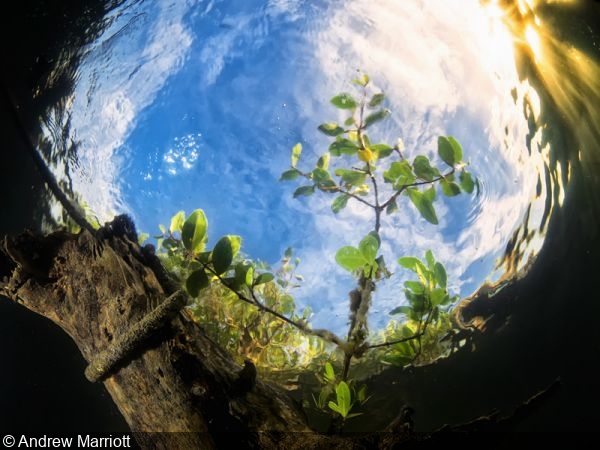 Sunset in a mangrove on North Sulawesi: You’ll need your strobes to light up the subjects from below

The next basic thing to consider is how you are going to compose the window. Shooting straight up is not always practical. The transition zone between over and under is also a way to shoot, and it can be used to create an over/under-style shot. Bear in mind that if you get outside the cone needed for the window, your underwater subject will be mirror-imaged onto the surface in the place outside where the window would have appeared; this is the inverse of Snell’s Window, where the window becomes a mirror. It’s a very cool effect, but we will save that for another day. 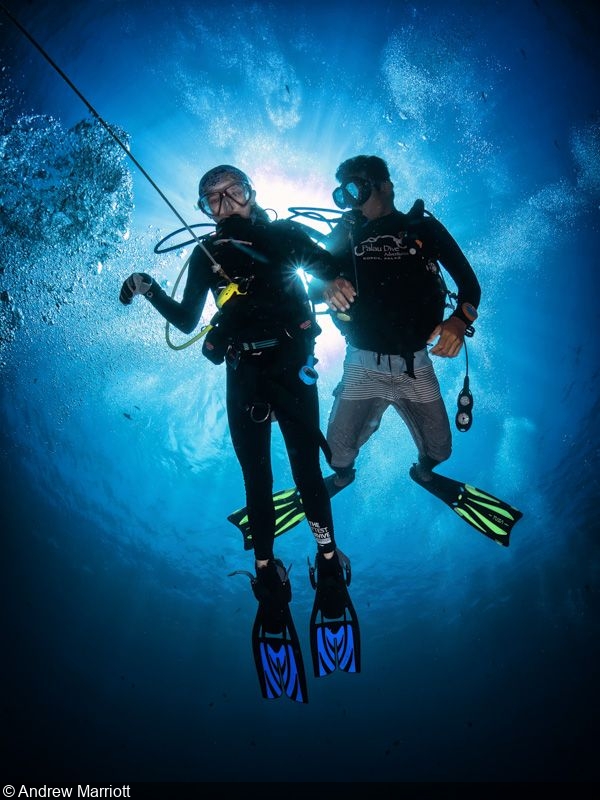 Create memorable shots of your family’s dives. This is my daughter doing her first certified dive in Palau

Assuming you have good buoyancy control, hovering in blue water is the easiest way to shoot Snell’s Window. Of course, it may not always be the most interesting. If you have epic clouds, a sunset, or some other subject, then you are good to go. For blue water shots, you will need a subject.

While composing your shot, think “outside the water,” unless you happen to find a jellyfish or something floating at the surface to put in front of your lens. Blue sky surrounded by blue water needs something to draw the eye and make the image pop. Blue water is also a good place to use the window to create an over/under effect. I have found it easier to shoot over/unders using Snell’s Window when I have my small travel dome on my camera. On the surface, the smaller dome is very hard to get right, so I just drop down a few feet and shoot through the water. Still, shooting in blue water is both the easiest and hardest to get right. It’s technically very simple, but you will need to work harder to find a subject. 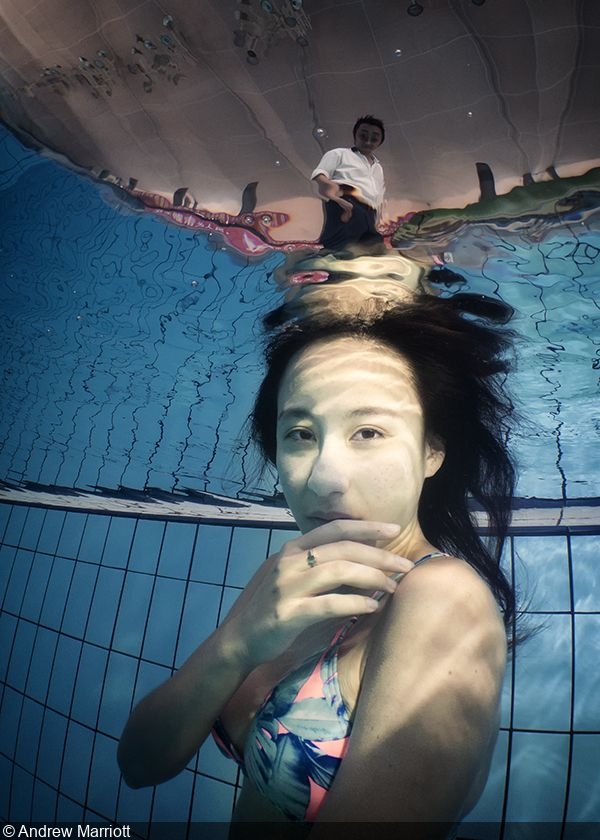 It’s not blue water, but you can see the over/under effect in this picture taken in a pool. You don’t need fisheye lenses to make these images work: This was shot with a simple point-and-shoot camera

Lagoons, mangroves and calm mountain lakes make fantastic places to shoot using Snell’s Window. They offer awesome scenery above the water and the shallow depth allows for unlimited time in the water; you don’t even need to go underwater to get these shots! The biggest challenge you’ll find is getting water that is clear enough to shoot through. Any type of wave action will stir up the shallow bottom, so you will need to be patient and be prepared to act quickly when the moment presents itself.

If the water is only a couple of feet deep, how am I supposed to shoot? Remember the 12-second timer button that you used to use at family picnics? That’s your key to success in these conditions. You will want to take several test pictures of the sky to get your exposure right. You won’t need to change that exposure when you put your camera underwater as the window you shoot through will be nearly identical to what you see at the surface.

After getting your exposure correct, you need to change your trigger to the 12-second timer. Don’t bother with the two-second one, as you need to give yourself time to get out of the shot. Very gently place your camera on the bottom and hit the trigger. Then you need to slowly back away and get out of the frame. The best way to assure this is to exit the frame from the top or bottom—meaning that you want to be at the top or bottom of your rig when you hit the button. Be careful as you move away as the bottom is very easy to stir up and that will ruin your shot. 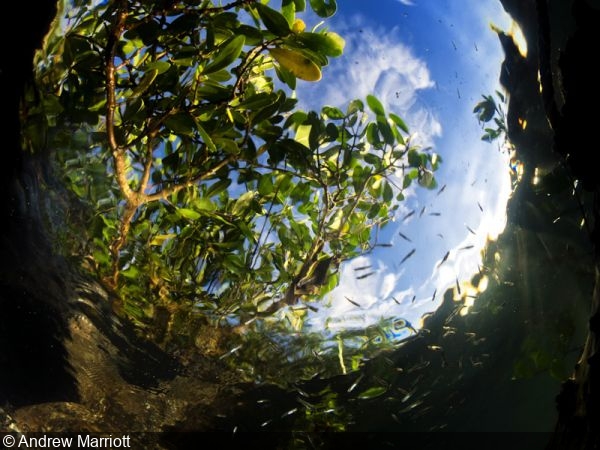 Snell’s Window is such a cool effect that you can even use it as a subject. You don’t want to do this too much, as it can get monotonous without a more substantial target for the eye to be drawn too, but there are some situations where you can use the window. My favorite is rain. If you hear a torrential downpour on your safety stop, get your camera ready! The rain impacting on the surface is a unique image and well worth shooting. Still, aside from very specific situations, you are going to want a more concrete subject for your Snell’s Window shots. 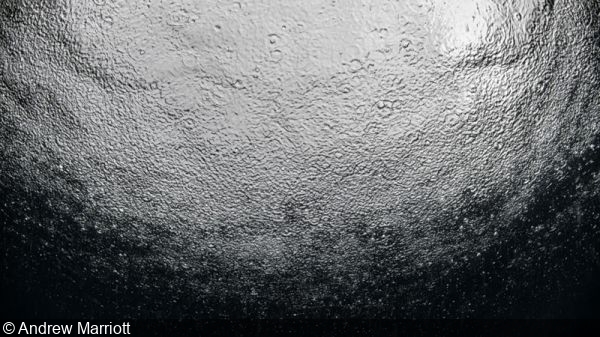 Subjects for Snell’s Window shots come in two varieties: those above the surface and those below. These are very different topics, so let’s address them separately.

Clouds. In a word, that is the most popular subject. How often do we expect to see clouds or a sunset underwater? A dream situation is sunset with calm water and nice cloud formations. Boats, people, docks, and trees are also great subjects. There are so many intriguing possibilities, it’s impossible to go into detail on each, so here are a few basic tips.

Set your exposure to the surface. This may seem obvious in clear, well-lit water, but when shooting in darker conditions, you don’t want to have the camera meter the much darker underwater environment for the shot. If you are shooting this late in the day, or in the shadows, keep in mind the underwater area that appears outside the circle of the window will be very dark or even black. Think of it as a natural vignette at its finest! If you have a darker environment, it may help to have a video light topside to throw some light on your subject or to bring up the shadows. 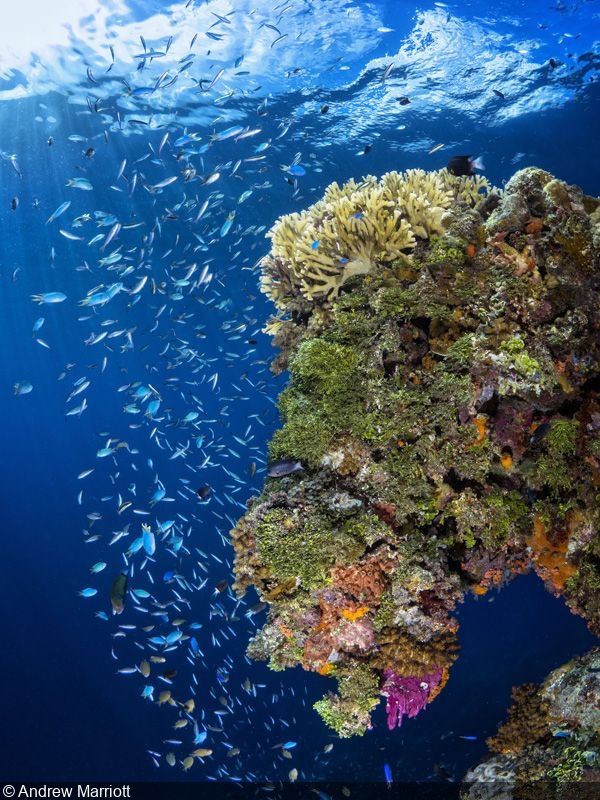 Divers are easy targets and they make the most obvious subject. Bear in mind that you are going to be looking up for your shot. This means that your subject will be in a dark shadow with a bright background behind. Solution: Turn on your strobes. In blue water, this is just like any other shot, so turn on your strobes, crank up the power, and blast away. However, if you are using a timer in shallow water, you’ll want to spend some time angling your lights to only hit your subject. This won’t work with moving targets, like fish, so if you are shooting swimming critters, you just need to keep shooting and hope you get lucky.

Something to keep in mind when composing the lighting for timer shots is that you need to remember that the exposure has been set for the surface light. In bright conditions, you just treat it like any other shadow shot, but if it is darker, you’ll want to bump up your lights a little to compensate. Accept that there is going to be a lot of trial and error and have some fun with it! 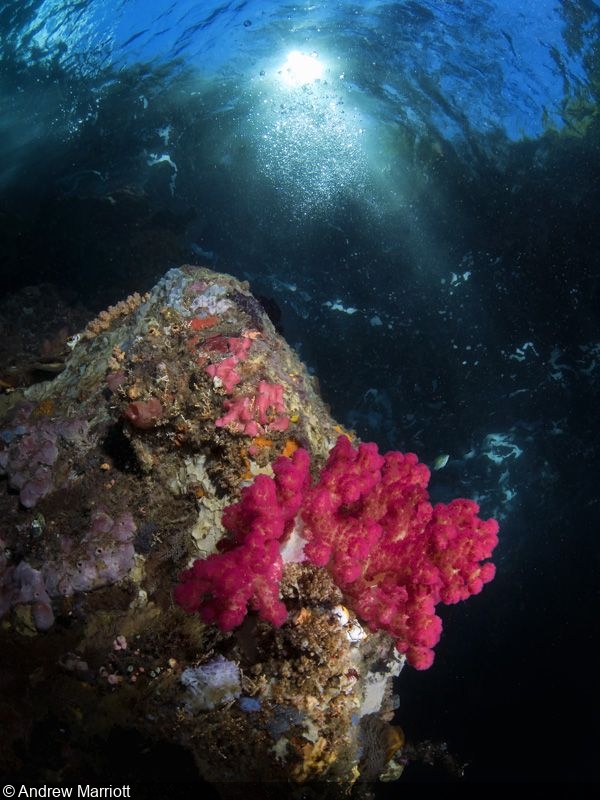 Some shallow soft coral in Lembeh: The sun just happened to be right in the window, which made the jungle behind harder to expose correctly

Shooting Snell’s Window is very much a niche shot, but it can make your viewers stop and pause due to how different it is. If you get a great subject, or use some creative lighting, you can shoot images that will stand up well in any underwater photo competition. You’ve got nothing else to do at the end of the dive, so give Snell a few minutes of your time before you climb back into the boat. 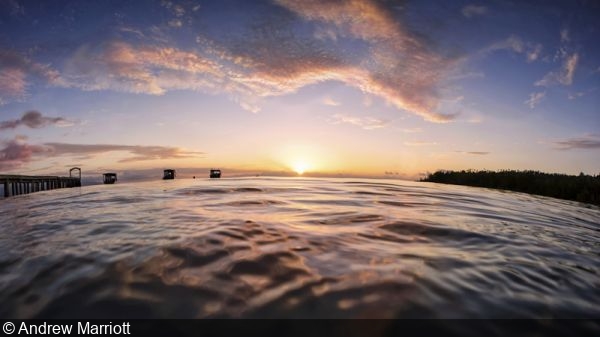 Sunset in Manado: This is a nice scene, but I wanted to shoot it underwater 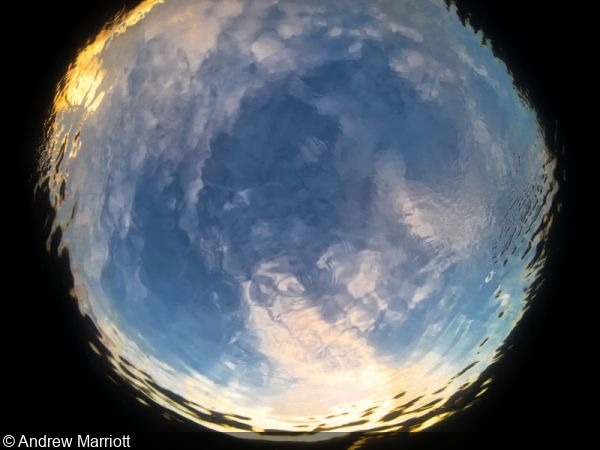 Here is that same sunset about 20 seconds later!