Most photography books will tell you to “never shoot into the sun.”  All rules have exceptions.

Even underwater, the problem with shooting into the sun is that it is so bright that in order to not completely blow it out, everything else in the image will be underexposed. Often times other objects are completely devoid of color. This, however, isn't always a problem.   Shooting a subject against a bright background so that the subject becomes a black, featureless object is called a silhouette, and it can make for an effective image.

Almost every collection of wildlife photography includes at least one silhouette, usually with some animal against a sunset. Underwater, silhouetting subjects is a great way to add drama and mystery to your photos. 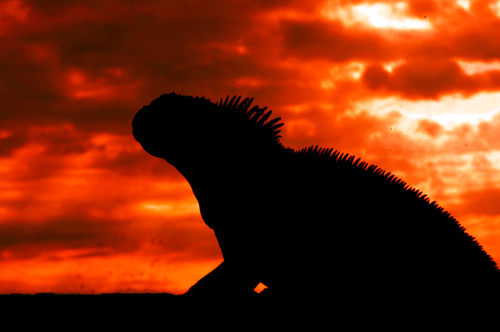 The first step in taking a good silhouette is to recognize a subject that will be effective as a black shape against the blue (or green) water background.  The most common silhouettes underwater are of sharks, turtles, mantas and divers that form distinct, recognizable shapes when featureless. Additionally, these subjects swim in the water column so they are easily placed between the bright background and the camera. In fact ,sometimes it is impossible to get close enough to these subjects and the best option for creating a striking image is to go for the silhouette. 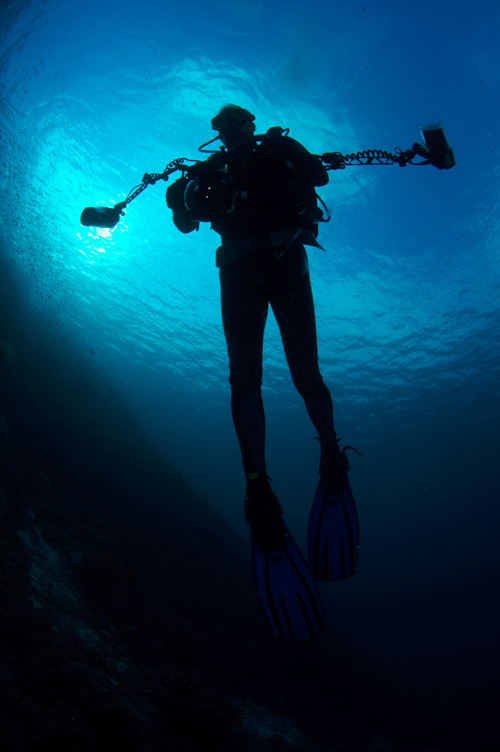 The Key is Where You Meter

The key to creating a silhouette is to properly expose the water surrounding the subject.  This is achieved by careful metering.  Meter in an area next to the subject so that the surrounding water is a nice shade of blue, similar to what you are seeing with your eyes.  By properly exposing a bright background, you will be underexposing the subject. If shooting right into the sun, the water should be bright enough that the camera renders the subject almost, if not completely, black. The subject becomes a featureless shape contrasted against a blue background. This technique is fairly similar to “regular” wide-angle photography, except you are not using strobes to light up the subject, nor would you be able to because it would be too far away for your strobes to reach.

It’s important to not meter exactly on the sun. The sun is so bright that if you meter on it, you will dramatically underexpose the surrounding water.  If the water is too dark, the edges of the subject will barely be visible. By exposing for the sun, you will essentially be silhouetting the water rather than the subject.   However, this means that the sun will be overexposed if left in the frame.  In order for the sun to not look like a washed out white blob, either place it strategically behind your subject, also effectively backlighting the subject, creating a “halo-esque” like glow around the subject that can add to the dramatic feel of the image.

Alternatively, place the sun just outside the edge of the frame, where only some of the rays are entering the frame. Use high shutter speeds to freeze the rays of the sun, as well. Since only natural light is being used, there is no need to limit the shutter speed to the sync speed of your strobes. For more on shooting sunbursts, refer to Shooting Sunbursts article.

Using manual settings is a good idea when shooting silhouettes because you want to get nice blues while still having a dark subject.  Meter at an area where the water is blue, but  modify your settings so that you get the blue you want, rather than what the camera wants. Shoot, review and adjust accordingly. For more on metering, refer to the Metering Article.

All you really need is a camera to create a silhouette, but having a wide angle lens helps.  If shooting with a compact camera, zoom out all the way and leave some room between you and the subject. Using a wide-angle wet lens can also come in handy. Many compact cameras have trouble handling sunbursts, so its best to keep the sun directly out of the image.  If using a DSLR camera, choose a wide angle lens such as a fisheye or mid-range zoom. The contrast between the silhouetted subject and the background will be more or less pronounced at varying distances from the subject, so experiment a bit until you find the look that feels right to you.

Strobes are not used when shooting silhouettes, so you might as well turn them off to save some battery, and make sure they are out of the image.

As mentioned earlier, choosing proper subjects is important when shooting silhouettes.  Remember to try and ensure that the subject is easily recognizable as just a shape without any sense of color or detail. For example, if shooting a turtle, it’s much better to capture it with its appendages fully extended to give it that “classic turtle shape”. If they are tucked close to its body it will looks like an ambiguous object in the water. 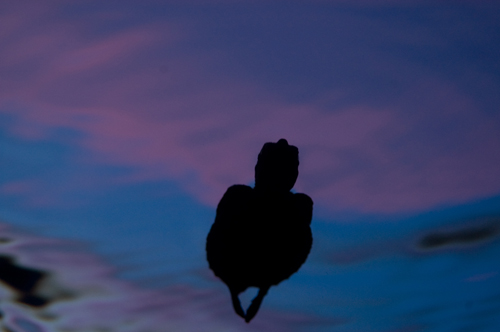 This was an attempt at silhouetting a juvinille turtle in Palawan, but because the flippers are not extended it's hard to tell it's a turtle. Make sure the subject works well as an outline.
Silhouetted images convey different feelings than normal images.  Their inherit simplicity often provokes a sense of drama. That’s why we often see silhouettes of subjects that evoke emotions regularly, like sea turtles, sea lions, manta rays, sharks, large schools of fish and humans.  You are, of course, not limited to these charismatic subjects, and exploring subjects and scenes to silhouette can be a fun activity.

Get Out There and Shoot Some Silhouettes

Silhouettes are simple yet effective.   Find a subject that will look good as a black shape and place it between your camera and the sun.  Meter on an area of water that is adjacent to the subject but not the sun. Play with your settings so the subject is underexposed, the blues are just right and the sun is not distractingly overexposed.

Continue through the Creative Techniques section for more unique types of underwater photography.