By Mike Smolowe
What first intrigued me about surf photography was the idea of two completely separate entities, man and water, moving in opposite directions yet in complete unison simultaneously.  Where underwater dive photography concentrates on documenting the life below the sea, surf photography seeks to capture the life of the sea.  Continuously offering the ever-gratifying element of surprise, swimming in Mother Nature’s most highly concentrated form of energy with a camera promises never a dull moment nor the same photo opportunity twice.

The arrival of the first surf –specific water housing can be traced to the 1930s and a man named Tom Blake.  A pioneer of not only surf photography, but of surfing itself, Blake put the first fin on a surfboard and created a template for the modern windsurf board. Most importantly, however, Blake crafted the first waterproof box enabling surfing images to be documented from the water. 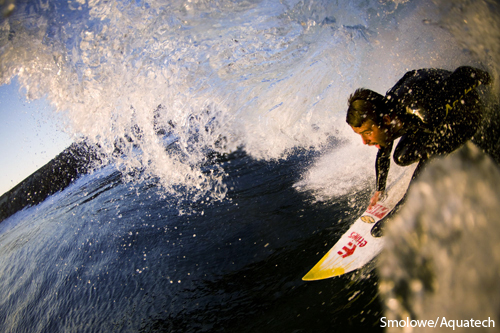 With the invention of the 35mm SLR camera, the modern housing began to take shape as medium format housings disappeared, making way for lighter, smaller equipment.  Evolution has brought us into the present digital age, where film has taken a backseat to the DSLR revolution.

Today, water housings are typically made from hard plastic or carbon fiber, and can range from one single piece, to multiple adjustable lens ports and flash brackets.  Where dive housings require construction allowing for deep rated depth durability, surf housings stay near the surface, allowing for lighter, smaller construction and depth ratings to around 30 feet.  I recommend Aquatech© Water Housings.  Each piece on their housings is detachable, allowing for easy equipment change without needing to buy a new housing, not to mention they are the most durable housings I’ve seen.
Attempts to shoot surfing with a dive housing will prove frustrating, obnoxious and, more than likely, dangerous.  Such a bulky, heavy piece of equipment can still be moved very easily by surging water above the surface, and without control of your camera/housing set up, it’s only a matter of time before you get a nice shot to the face from your lens port. I’ve seen too many broken noses and black eyes from ten-pound surf housings to trust something three times as heavy and twice as big in pumping surf.  If you want to try surf photography but don’t have access to the equipment or money to buy your own, borrow a friend’s or research rentals.  While they aren’t well advertised, they do exist. 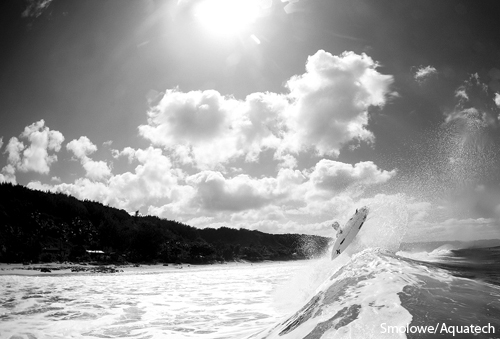 Typical cameras used for surf photography are higher range SLRs with the highest frame per second speed available.  Because of the constant movement of water and small window for getting “the shot,” a high frame per second speed allows the photographer to concentrate on getting in the right position and holding the shutter down to ensure precision.
There is a common misconception by those not familiar with surf photography that the photographer is on a surfboard shooting photos.  For the most part, surf photographers are swimming freely in the ocean, supported only by the strength of their legs and the fins on their feet.  Where dive photographers use large dive fins, surf photographers tend to use smaller body surfing fins that enable them to fit into tighter spaces and leave less to worry about when dodging waves.  My personal recommendation: Viper Brand© body surfing fins.

Surf photographers have many lenses to choose from.  Each lens serves a distinct purpose; a poor choice of lens can result in squandered opportunities.  The most common lens is the 15mm fisheye or non-full frame equivalent (I recommend the Tokina© 10-17mm).  A fisheye lens allows for perspective to be slightly warped, enabling more room in the frame.  The typical “inside barrel” shot, as seen below, requires the photographer to anticipate exactly when the wave will break while being in the right position to capture the surfer in the perfect moment.  To achieve a shot like this, a fisheye lens is needed and should be between one and three feet away from the surfer.  There is little room for error: one misstep can cause injuries to both surfer and photographer. But when a shot like this comes together, it’s magic.

Fisheye shots also work well when attempting to highlight impressive action on a wave such as a big turn or air, or accenting the size and shape of a wave close up.  To achieve focus with a fisheye lens, you can set the focus before you ever get in the water.  A useful trick: put your camera on auto-focus, focus on a wall approximately 3 feet from the camera, then switch the focus back to manual and you’re set to go.  The more you stop down, the more will be in focus; pretty much any aperture smaller than f/5.6 will render everything in focus. 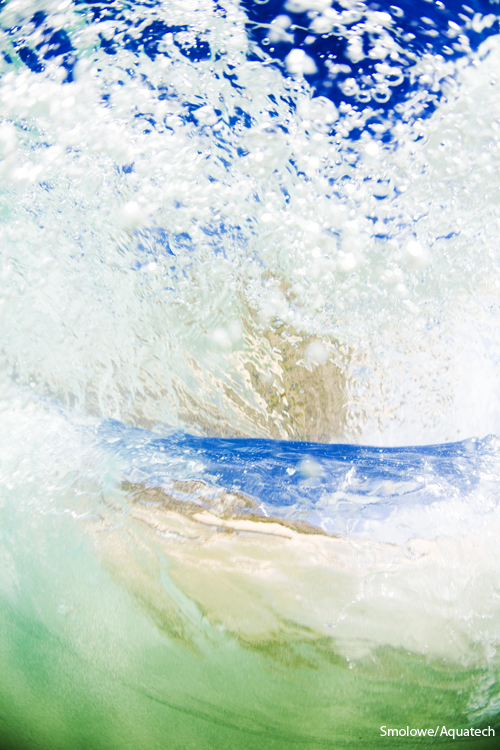 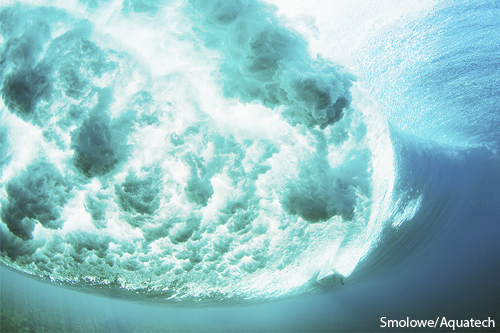 Sometimes when shooting at a large point or reef break with a channel, a photographer will opt to sit on a body board at a safe distance from the impact zone and shoot with a longer lens.  With the element of risk gone, you have the ability to frame the shot in the viewfinder and designate focus.  I find the best way to do this is enable the custom function that allows the rear button on your camera to focus (for Canon it’s the left of the two buttons on the top right on the back of the camera) and shoot on AI Servo continuous focusing. 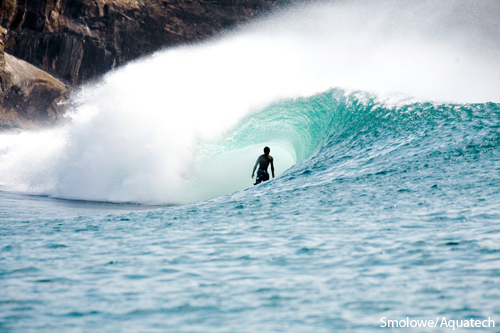 When shooting wide angle it’s hard to have any control over selective focus, but with a long lens you have the ability treat surfing and water the same way you would shooting any subject on land with a small aperture. 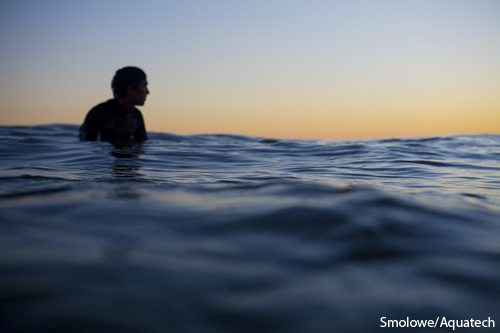 Surf photography is unique because there are so many elements moving simultaneously. No matter how hard you try, you can never be in complete control of everything going on in the water.  For example, in this shot I was trying to highlight the wave in the background shooting at 70mm f/2.8 using AI Servo focusing.  It’s hard to tell from this angle, but this image is shot directly underneath a pier and at low tide. The surges of water pushing off of the pilings were pushing me back and forth as waves came and went.  Just before I hit the shutter, a surge sucked me down, causing the continuous focusing to shift to the surfer’s leash and thus creating a distinct depth of field.  This is one of those instances where an unavoidable and unanticipated thing happens that takes a vision and moves it to the next level.  As a surf photographer, it’s some of these unexpected types of images that I cherish the most. 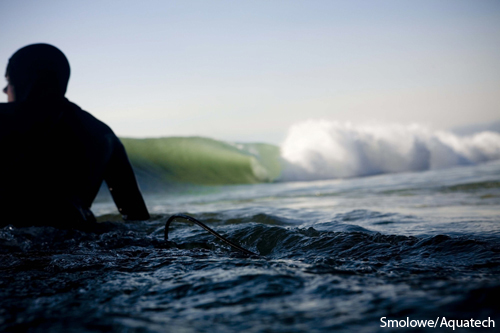 When I first began shooting water images, I misgauged how fast a shutter speed to shoot at to capture action with no signs of movement.  I began shooting at 1/500 of a second and couldn’t figure out why my focus was hit or miss because anything I had ever shot from land at even 1/320 had been sharp.  After a lot of testing and countless missed focuses I found that to ensure no movement at all, the magic shutter speed is 1/1000 of a second.  There are plenty of photographers that don’t even trust that and refuse to shoot at anything less than 1/1250, but 1/1000 has yet to give me any trouble.

That said, good morning or afternoon light doesn’t always allow for those kinds of shutter speeds. In these circumstances you have three choices:

1) Shoot as fast as your camera allows for proper exposure.  While you may not get perfect still action, sometimes you’ll capture something by accident that you didn’t anticipate. (below shot @ 1/500 second) 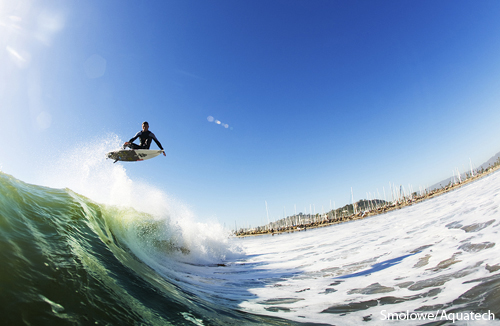 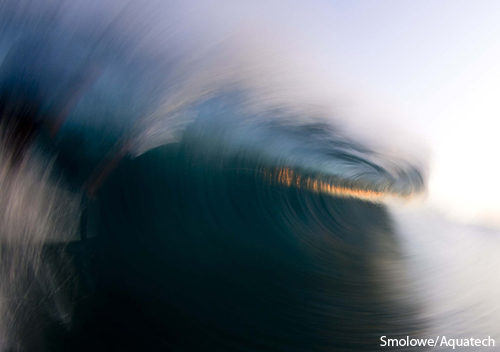 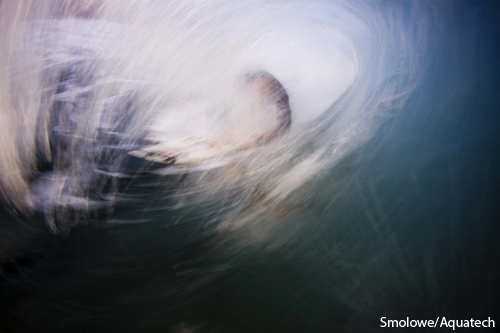 3) Break out your flash.  Yes, it’s possible to control light even in surf  photography.  Different housings allow for different control. Possibilities range from on-camera flash to supplemental flashes that are held by other swimmers and triggered by either your on-camera flash or a pocket wizard. 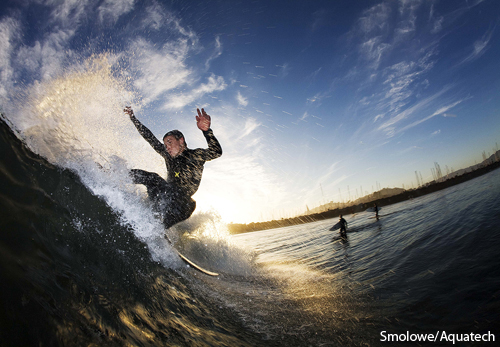 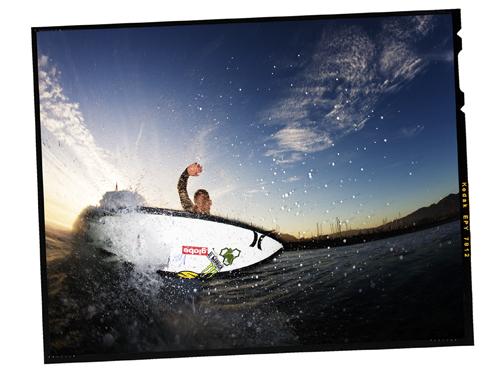 Another common misconception (even by some surf photographers) is that every shot must be front lit by morning or afternoon, directional, “beautiful light.”  While these images have given surf photography its reputation, some of my favorite images are non-traditional.  Getting the fundamentals of shooting down is key, but don’t be afraid to try something new!  As in surfing itself, there is always room for progression. Count on it: if you don’t try something new, someone else will! 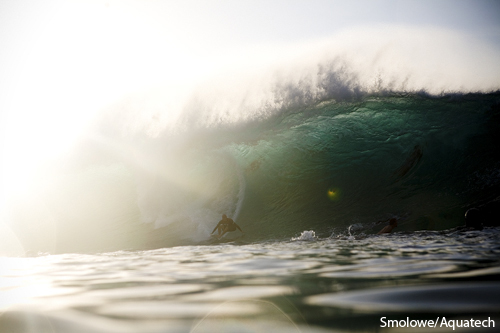 Everyone has his or her own methods. Here’s a quick checklist of the valuable tricks of the trade I’ve picked up along the way:
Return back to Techniques Section
Facebook CommentsComments
Be the first to add a comment to this article.
You must be logged in to comment.
Support Our Sponsors
Advertise With Us
Newsletter
Travel with us