Containing no optical elements, extension tubes are very basic super macro tools. They are, as their name implies, simple hollow tubes meant to mechanically hold the primary lens a particular distance away from the sensor. 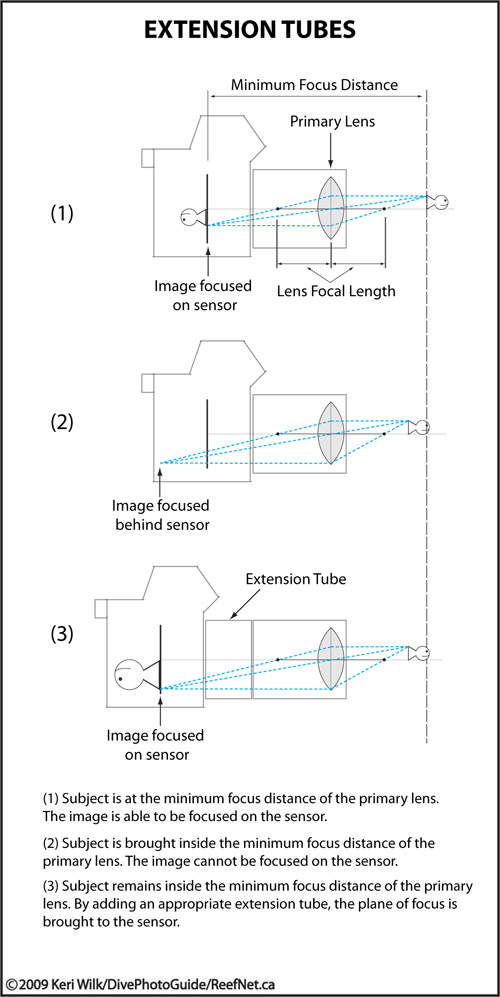 As a subject is brought closer than a lens’s minimum focus distance, the resulting image is focused beyond the sensor plane, so it appears blurry. When an appropriate length of extension tube is added to the system, the larger image is once again allowed to focus on the sensor. The diagram above illustrates the image size increasing as the subject is brought closer to the primary lens. As a rule of thumb, for each additional lens focal length worth of extension tubes added to the system, the magnification ratio increases by one. In equation form: 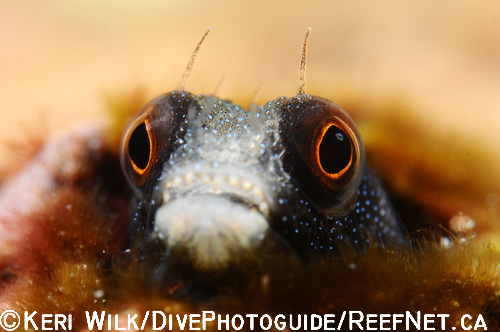 So, if you add 50mm of extension tubes to a 1:1 100mm lens, you’ll be capable of shooting at a 1.5:1 reproduction ratio. But interestingly, the same 50mm ETs combined with a 1:1 50mm lens will yield 2:1 (but working distance will be significantly smaller)! So why can’t you stack 1000mm of ETs together with a 100mm lens to get a whopping 10:1?! Technically you could do this…BUT you’d be forced to use a ridiculous number of port extension rings and would be shooting underwater with an overly buoyant 3 foot long lens! Not exactly practical, as I’m sure you can imagine! And remember, extension tubes increase magnification by allowing the subject to be focused inside the primary lens’s normal minimum focus distance, so as the extension increases, the working distance makes its way toward zero (actually the lens’ front focal plane, which is generally very small).

While ETs do allow for greater levels of magnification, they also limit the far focus point of the lens it is combined with. You’ll no longer be able to focus at infinity. But that is of little concern for underwater photography, since generally the less water between the sensor and subject, the better. For a detailed explanation of how/why extension tubes affect minimum and infinity focus points of a primary camera lens, check out PART 5. 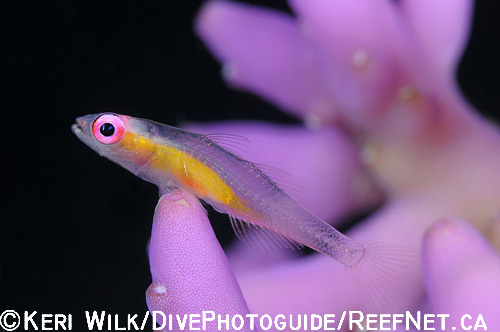 Since ETs don’t contain any glass elements, they don’t introduce any of their own optical issues (contrary to teleconverters). However, since higher levels of magnification are being achieved using the same primary lens, any associated optical problems will once again be amplified in the resulting image. 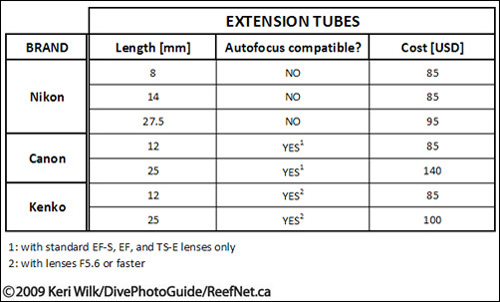 Port length can be crucial when using extension tubes, since working distance is decreased. You’ll want to make sure your port is almost (but not) touching the front of your lens at maximum magnification. Whatever the port setup you choose, remember that ETs are mounted directly onto the camera inside the housing, so once you start a dive with one, it’s on for good.

Light at the sensor is again diminished due to the “bellows factor”, but not to the same extent as with teleconverters (see PART 2A & PART 5). Increasing magnification from 1:1 to 2:1 via ETs results in a 1-stop light loss, compared to a 2 stop loss with a 2X TC.

So, to summarize, for super macro underwater photography, ETs are good for moderate amounts of additional magnification, but not nearly as practical for extreme reproduction ratios as teleconverters. And, although they’re much less expensive and cause much less light loss, they come with the same level of pre-dive commitment. 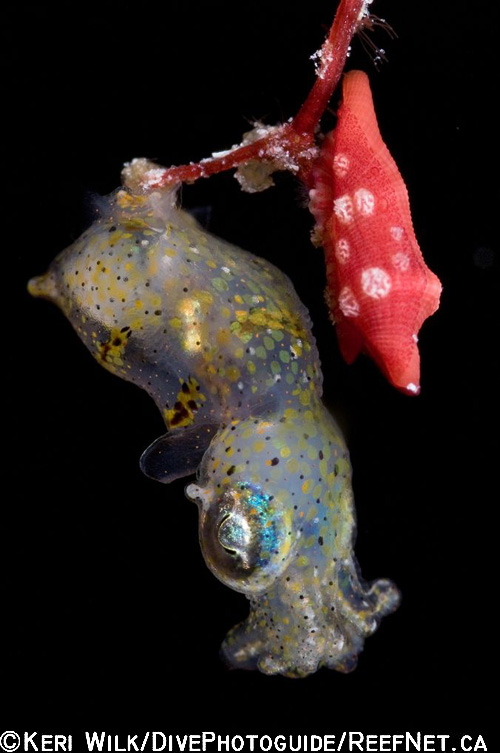 These lenses, commonly referred to as “diopters”, are placed between the subject and primary lens, and increase magnification by decreasing the minimum lens-to-subject distance of your camera system (this will be explained in more depth below). The term “diopter” and “close-up lens” are often used synonymously. However, this is technically very inaccurate. A diopter isn’t a physical object. A”diopter” (or “dioptre”) is actually just a unit of measurement used to quantify the optical power (aka dioptric strength) of a lens, and can be determined as follows.:
Dioptric strength [in diopters]= 1 [in meters]/Lens Focal Length [in meters]*
*converging lenses have positive focal length values, while diverging lenses have negative focal length values, which result in positive or negative dioptric strengths, respectively.

Saying that you attach a diopter to a primary lens is like saying you strap “a cubic foot” to your back when you dive, light your room with “a watt”, or measure temperature with “a Fahrenheit”… right? But enough semantics. We commonly call them diopters. 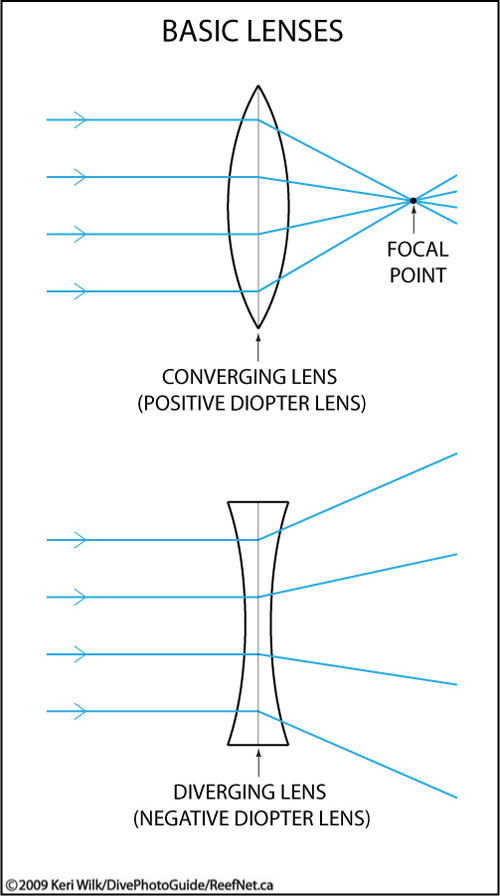 By convention, converging lenses, which focus light to a point, are assigned positive diopter values (+0.5, +2, +5, +8, etc.), while diverging lenses, which spread light rays, are assigned negative diopter values (-0.5, -1, -6, etc.). In PART 2A, negative supplementary lenses (i.e. teleconverters) were already discussed, so now we’ll take a look at the pros and cons of positive supplementary lenses (hereinafter referred to as “close-up lenses”) for super macro underwater photography.

COMMON CHARACTERISTICS
Close-up lenses are produced by many manufacturers, and come in several sizes, strengths, levels of quality, and optical designs. However, all positive diopter lenses have a few traits in common.

Function
Regardless of the design, magnification is attained by the same optical mechanism, as is illustrated below: 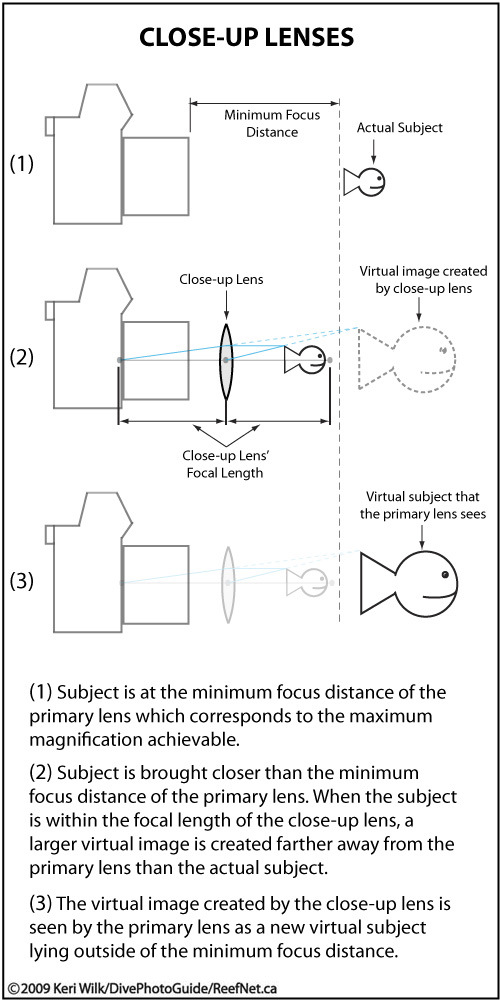 You farsighted folks might not realize that your reading glasses operate in exactly the same way - that is, by creating a virtual image of close objects (i.e. this text) far enough away from your eyes for you to focus upon.

Focus Distance
All close-up lenses have the same general effect on a camera system’s maximum and minimum focus distances. Probably the most important piece of information you need to understand about close-up lenses is the relationship between dioptric strength/focal length and working distance. 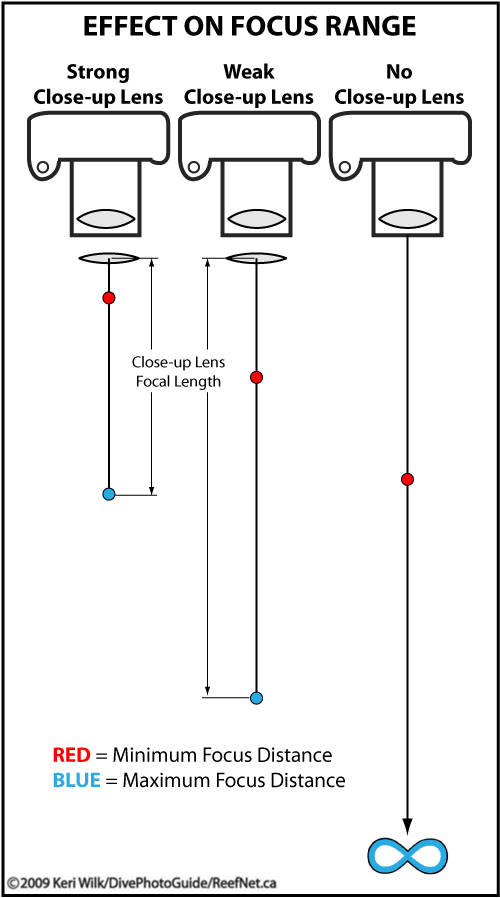 For example, regardless of what primary lens a +10 diopter close-up lens (100mm focal length, see formula above) is paired with, the object being photographed cannot be more than 100mm away from the lens. A +5 diopter lens’ far focus point is 200mm, but provides half as much magnification. Keep this limitation in mind when looking into purchasing a positive diopter lens. 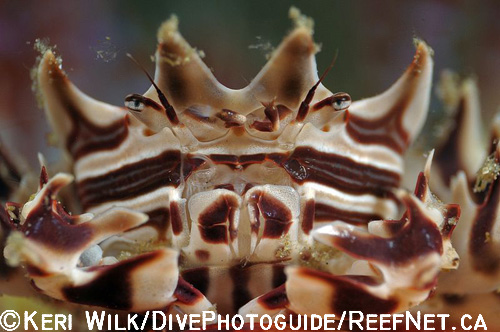 Close-up lenses are usually constructed from optical glass or high quality plastics (R.I.=1.5). When used in air (R.I.=1.0), the relatively large difference in R.I. values (50% difference) results in significant light bending (i.e. magnification). Water, however, has an R.I. value much more similar to that of most glass/plastics (R.I.=1.33). So, when a lens’ refractive surfaces are exposed to water, the light isn’t bent nearly as much as in air, resulting in close to a 2/3 loss in magnifying power! (See PART 5 for a full explanation) 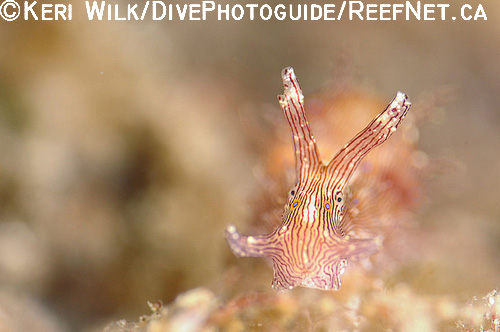 A major benefit of this type of super macro tool over teleconverters and extension tubes is the interesting fact that using them does not reduce light at the sensor. In fact, from a theoretical point of view, close-up lenses actually result in a net GAIN of light intensity (see PART 5 for details)! Since illumination is preserved rather than diminished compared to other super macro tools, you can use a comparatively lower strobe output, a faster shutter speed, a smaller primary lens aperture (to increase depth of field), or a lower ISO if necessary.

Optical construction of close-up lenses varies greatly between manufacturers, but they can be separated into two main groups:

(i)    Single element optics
U 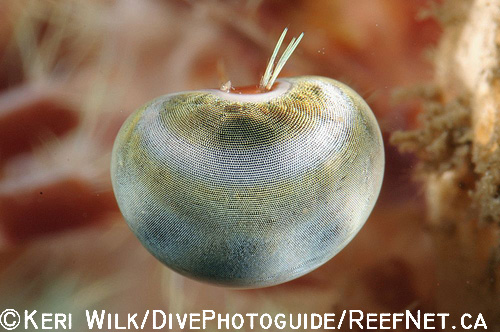 sually a single bi-convex lens (see diagram below), this is the simplest and least expensive form of close-up lens available. When made with spherical surfaces, significant edge distortion and chromatic aberration is introduced with these simple lens designs, so they aren’t the ideal tool for achieving high levels of magnification. As dioptric strength is increased, edge distortion increases exponentially, so only very weak single element close-up lenses can be used effectively.

However, it is possible to drastically reduce optical distortion by using aspherical lens surfaces… but this would likely increase costs greatly, and chromatic aberration issues would remain. I haven’t heard of any close-up lenses using this type of design, although it is technically possible.

(ii)    Multi-element optics
Much more complicated are designs that combine two or more optical elements to produce an equivalent strength close-up lens with much less edge distortion and chromatic aberration. Since they have much higher image quality, these close-up lenses are definitely the preferable choice for higher levels of magnification.

There are several multi-element optical designs that manufacturers use to create positive diopter lenses, but cemented achromatic doublets (see diagram below) are the most common in the photography world. When looking into buying a lens, make sure you look for the word “achromat” or “achromatic” in the description. These terms are used to describe lenses which are designed to correct chromatic aberration (colour fringing). 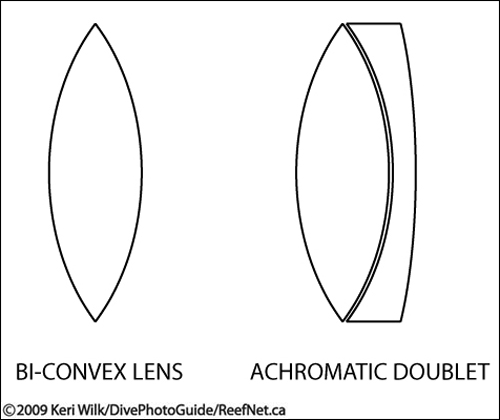 Bonded achromatic triplets, air spaced achromatic doublets, and other (more complicated) specialized systems exist which all are capable of achieving even better image quality, but their cost and size make them impractical for mass production. 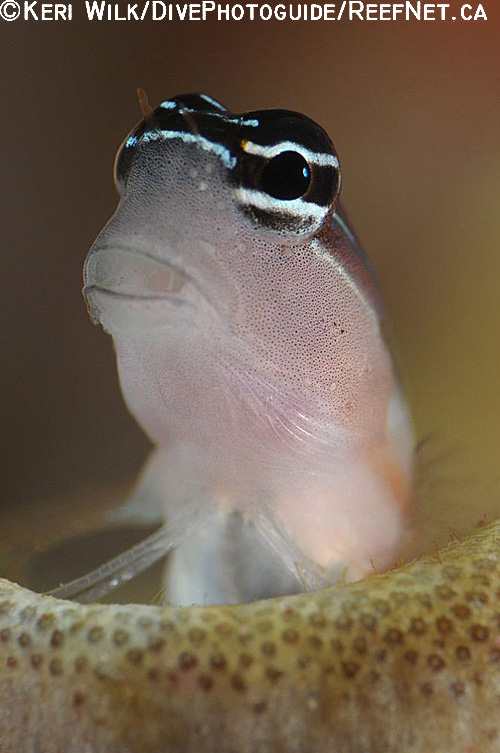 e-up lenses
These mount directly on the primary lens, inside the housing. They have the advantage of maintaining their full strength underwater, since they don’t make contact with the water, but of course (like teleconverters and extension tubes), once they’re in place, they’re on for the entire dive. There numerous such lenses available from many manufacturers, including Nikon, Canon, Pentax, Tiffen, Raynox, Sony, Cokin, B+W, Hoya…way too many to list here.

Adding one or more dry lenses to your primary lens will increase the overall length of the camera system, which might require a port extension ring or two to accommodate it. Make sure you keep the port length to a minimum though, since working distance can be substantially decreased… every inch counts!

(iv)    “Wet” close-up lenses
These are lenses which are mounted outside of the housing, and can be added/removed as necessary while in the water. Being externally attached, no port length adjustments are necessary. For these reasons, wet lenses are the most versatile super macro tool available.

Technically, any “dry” close-up lens can also be used as a wet lens, but as explained above, they will lose approximately two thirds of their power since their refracting surfaces will be in contact with water. Some wet lenses (designed for underwater camera ports) have been designed in the same way as dry lenses (lens surfaces open to the ambient atmosphere), and as a result they also lose most of their power underwater.

Some wet lenses, however, have been designed to eliminate the power loss problem by sealing the refractive surfaces within an air space. ReefNet’s SubSee Magnifier is a good example of this type of wet lens. Because its optical elements are kept in contact with air, even underwater, no power is lost and large degrees of magnification can be achieved underwater (more than 3:1 with some primary lenses). And being able to add/remove it while underwater increases the range of subjects that can be captured on each dive with a particular primary lens. 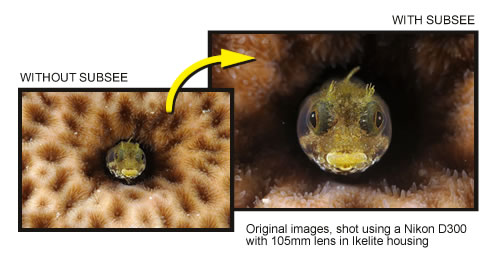 Wet lenses are, in my opinion, the best overall tool for achieving super macro photographs.

While there are a few other ways to achieve greater than 1:1 magnification (lens reversing/stacking, specialized photomacrographic lenses, compound microscopes, etc.), they’ve been excluded from this discussion due to their impracticality for use underwater.

Now that the tools have been discussed, it’s time to look at  various techniques involved with actually photographing super macro subjects. Stay tuned for PART 3: Techniques, where lighting, focus, and some general shooting tips/tricks will be explained.
Resources:
Richard A. Morton, “Photography for the Scientist”, 1984
Charles E. Engel, “Photography for the Scientist”, 1968
Rudolf Kingslake, “Lenses in Photography”, 1951
Rudolf Kingslake, “A History of the Photographic Lens”, 1989
Leonard Gaunt, “The Photoguide to the 35mm Single Lens Reflex”, 1973
Francis A. Jenkins and Harvey E. White, “Fundamentals of Optics”, 1957
Leslie Wilk, www.scubageek.com, 2009