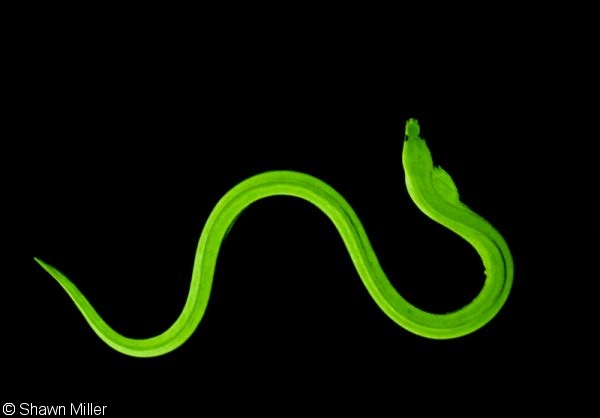 By Charles Mazel and Shawn Miller

Fluorescence is a truly magical effect: It transforms light from one wavelength to another and it will also transform your dive. Experienced divers appreciate fluorescence the most. Just when you start to think you really know your dive site and have “seen it all,” you can make it totally new again.

What Is Underwater Fluorescence?

Fluorescence is not the same as bioluminescence. Just about everyone who has dived at night has seen critters that make light by themselves, whether it’s plankton that you see when you turn off your lights, or ostracods during mating, or many other subjects. These animals contain chemicals that they mix together to produce the energy to make light. But the subjects that are fluorescing are not bioluminescent. They won’t ever light up by themselves.

Here’s a quick physics lesson, but a more detailed explanation can be found here. When a photon from your light source is absorbed, the energy moves an electron further away from the nucleus. This is unstable, so the electron will very quickly (billionths of a second) drop back down to the lowest energy level. One of the ways it can drop down is to give up the energy in a new photon of light. But between absorbing the first photon and emitting the second one, a little energy is lost, so the photon coming out has less energy than the one coming in. Less energy in a photon corresponds to a longer wavelength. This is how you get this transformation—light in at one color and out at another. 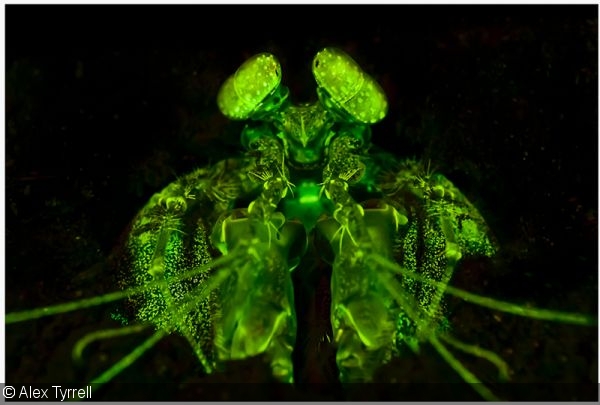 The process of fluorescence creates its own special requirements for photographers. The glow can appear very bright when you are looking at it in the dark, but that is because our own eyes are such good sensors. The process of absorbing and re-emitting light is actually quite inefficient, and there is a lot less light coming back toward the camera than you are used to for conventional white-light imaging. This means that you will generally be using more open f-stops and higher ISO. But more on that later.

Another factor arises from the fact that you don’t want to image the light from your light source—you want to capture light that has gone through this magical transformation process from one color to another. But when you shine bright blue light on a subject, a lot of that blue will be reflected back at you, in addition to whatever fluorescence might be going on, and it can completely hide the fluorescence. So you have to use an additional filter, called a barrier filter, in front of your camera lens. Its job is to block the reflected blue light while allowing the fluorescence through. This has a handy side benefit: There is no backscatter from suspended particles with fluorescence photography! 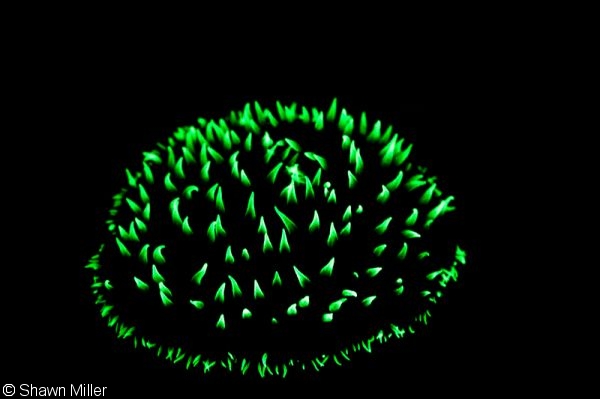 Fluorescence imaging involves taking images with light that has gone through a transformation.

In addition to your basic camera system, there are four additional pieces of equipment necessary to find and capture fluorescence underwater:

To produce the best images of fluorescence, you’ll want to work with a camera and strobes with manual exposure settings. TTL doesn’t always work well and you’ll do best adjusting your images based on what you see in your camera display. Since fluorescence is a weak effect, having a compact or DSLR camera with high ISO capabilities is a definite bonus. 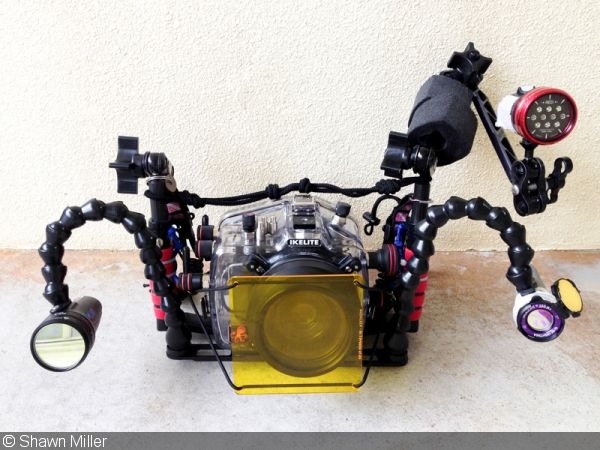 All of the required equipment to capture images of fluorescence, including search lights, excitation and barrier filters. 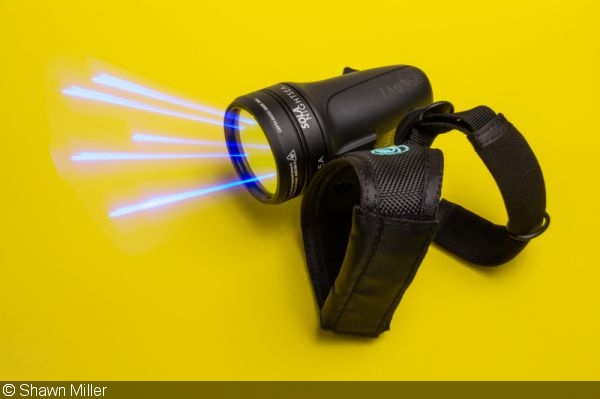 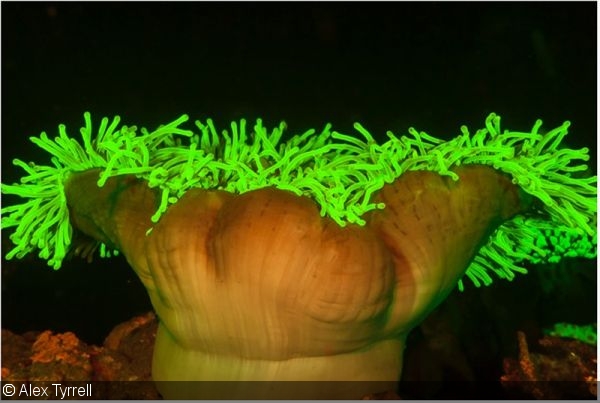 It is also possible to capture fluorescence in traditionally wide-angle subjects, such as this anemone.

It may seem obvious, but the best subjects for this type of photography are the ones that appear to fluoresce the most. Some marine animals fluoresce brighter than others, which will make photographing them much easier and you will not have to push the ISO capabilities of your camera.

Some of the common forms of marine life that fluoresce well are hard corals (polyps), most eels, sea anemones, polychaetes (specifically fireworms), nudibranchs, tunicates, seahorses and octopuses. There are plenty of fish that also fluoresce. One thing that's interesting is not all members of a given species actually fluoresce. But you really just have to explore and keep your eyes peeled for something fluorescing using your dive mask filter and powerful torch. You just might be the first to see and photograph some fluorescing critter! 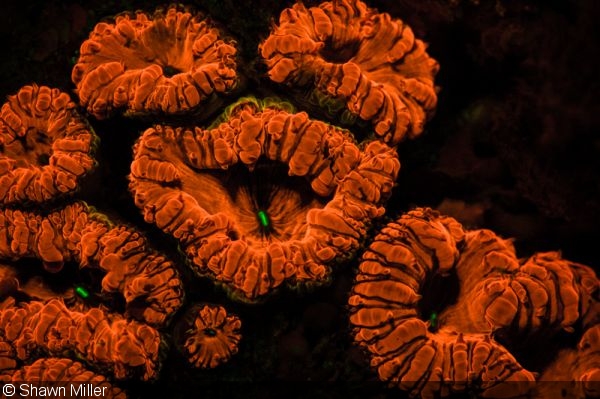 When other subjects cannot be found, hard coral and coral polyps make for reliable fluorescence subjects. 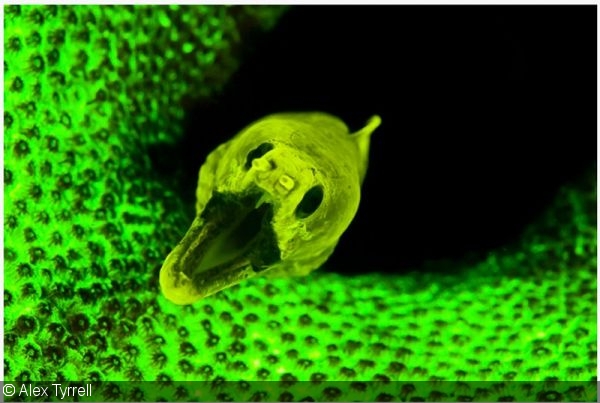 Many eels fluoresce well, and having the mouth open adds another element to the image.

Since some marine animals fluoresce brighter than others, you have to be capable of making changes based on each subject in the dark. Preferably, you want a more closed aperture setting for a greater depth of field. An initial aperture of f/8 is a good start, opening it up more if you find there’s not enough of the fluorescence reaching the sensor. And, although it can be adjusted in post-processing, setting your white balance to “cloudy” will give you an initial in-water sense of the image’s colors.

If you are using a flashlight as the light source, rather than a strobe, you will need a steady hand or even a tripod. Be prepared to bump up the ISO so that you can keep the shutter speed ideally at 1/60s or faster to avoid motion blur. If you are shooting with an electronic flash fitted with an excitation filter, you can reduce the shutter speed to 1/200s, or even faster if your camera allows, since the fluorescence only lasts as long as the flash itself. Either way, you can get some really spectacular results. 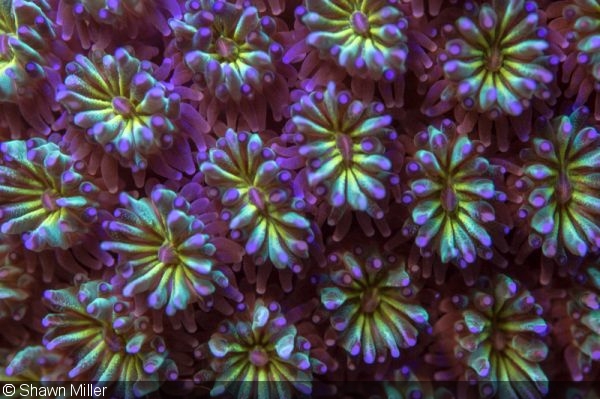 Many times you will have to boost your ISO to levels unusual for most photography, in some cases up to ISO 2500.

Alternative options: Let's say you accidentally lose your yellow barrier filter on your dive. Don't worry; you still have options. Try blending and combining your continuous blue light with the white light of another continuous light. This can produce outstandingly vibrant results. Another technique that is becoming popular with underwater photographers is using the blue light to backlight the main subject, which provides a beautiful background color to complement the marine subject. 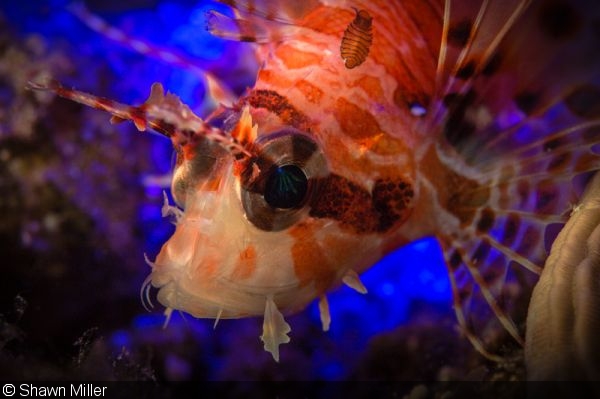 Even without filters, using a blue light can add an extra element to the background of an image, as is the case with this lionfish.

The goal is to shoot so you don’t have to spend too much time with post-processing. One thing about fluorescence images is that they often lack color and contrast when viewed in RAW compared to when viewed underwater.

For this reason, it’s important to shoot in RAW, if your camera allows it. You can start off by adjusting white balance to achieve the proper hue/temperature. Other important adjustments include adding contrast and exposure. Finally, increasing saturation and vibrancy can make the fluoresced light “pop” a bit more and match what your eyes saw in the water. 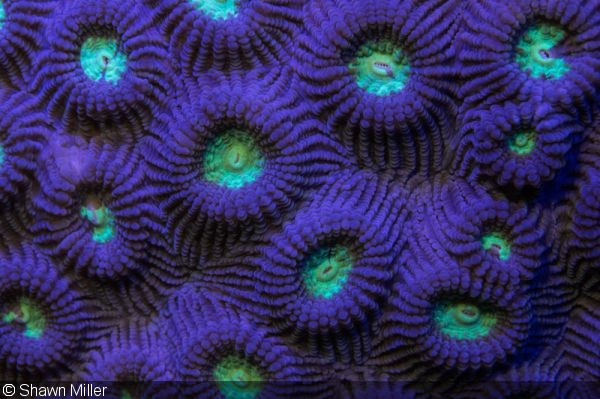 Fluorescence is often more pronounced to the eye than may be shown in your RAW images. Adding saturation and contrast can help make the effect in your images appear more like how it looked on your dive.

If you are becoming bored with your underwater photography, why not give some “fluoro” a try? Yes, it’s an extra investment in equipment and has a learning curve, but it will open up a new underwater experience and will bring that excitement back into your dives. Perhaps most important, you will produce images that stand out from the crowd.