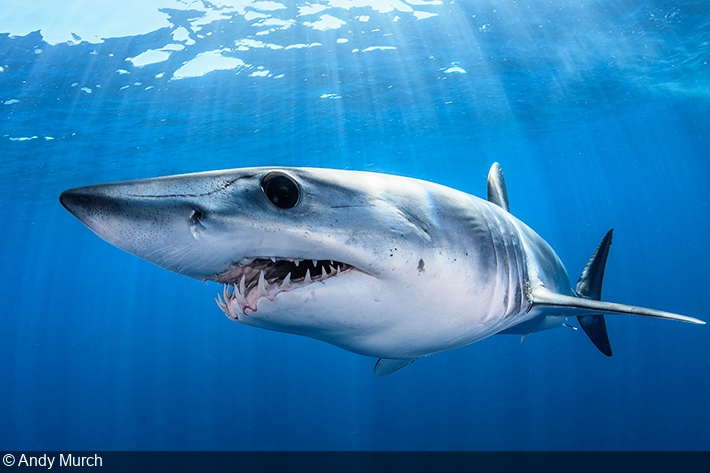 The mako shark, one of the fastest fish in the ocean

Shortfin makos are widespread within the subtropics and warm temperate seas of the world. But makos are open ocean predators that rarely venture onto shallow reefs, so your chances of randomly running into one while cruising through a kelp forest are extremely low. The only realistic way to see makos is to attend a chummed, blue water dive where the makos are enticed to the boat with hang baits. Even then, makos can be a bit hit-or-miss, but by going at the right season with an experienced operator, your odds of an encounter are pretty good.

Some of the hot spots where mako dives take place include Cape Point in South Africa, the Neptune Islands in South Australia, Pico Island in the Azores, Rhode Island and Southern California in the USA, and Baja in Mexico. In recent years, the encounters in Baja have been especially productive. 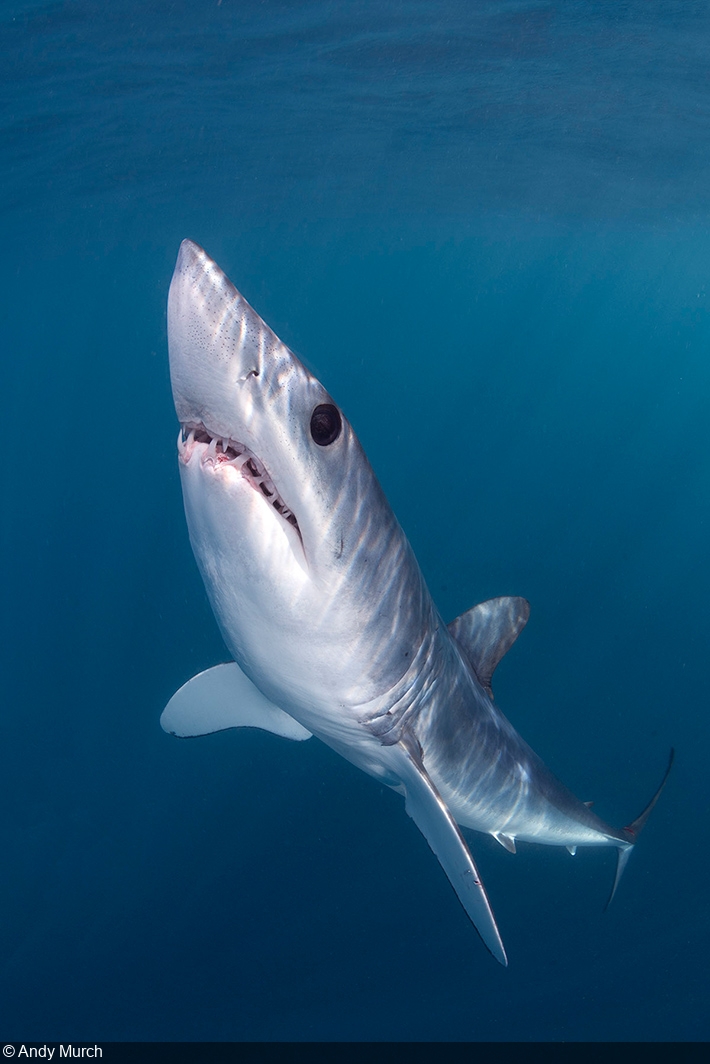 The first step to capturing compelling shots of shortfin mako sharks is understanding mako behavior. When makos show up during baited encounters, invariably they come in fast and immediately investigate everything they see that looks, feels, or smells like food. If they spot the hang bait first, that may get their full attention, but it is not uncommon for them to race around, mouthing the metal props—because of the electrical signals they emit—and nibbling on anything bright or shiny that is floating on or under the surface.

After an initial assessment, if they don’t feel it’s worth their while, some makos will leave immediately. Others will slow down and settle into a circling pattern around the boat, making frequent lunges at the hang baits. Makos are picky eaters. They quickly get bored of chum slicks, make less and less frequent passes as the minutes go by, and then swim off to find something more interesting to chase.

Occasionally, a player may stay around the boat for hours at a time, but that is the exception rather than the rule, so if you want the shot, you need to be ready. That means sitting around in your wetsuit even if it’s hot, and keeping your camera, mask, fins, and weight belt together in an accessible spot, so that you can jump in at a moment’s notice. To save precious seconds during the first few minutes of the encounter—when the mako is most likely to approach closely—it’s also a good idea to slip in beforehand to dial in your camera settings. 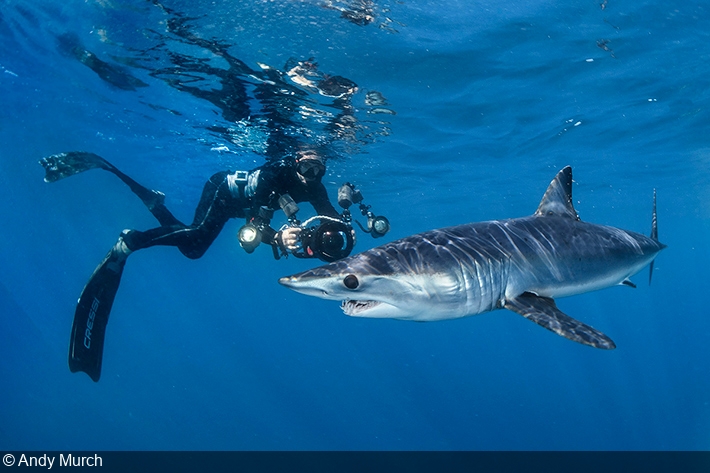 A typical encounter with a mako at the surface

Makos are capable of extraordinary speeds. Although they probably only swim flat-out when chasing tuna, they still move surprisingly fast when lunging at hang baits. Consequently, to avoid blurry images, it is important to use a fast shutter speed. A good place to start is 1/250s, but if there is enough available light and your camera is capable of it, consider upping the shutter speed to 1/320s or even faster.

Mako encounters usually take place at the surface, on snorkel, so it is possible to get pretty good results with natural light, though a little fill flash will really make your images pop. However, be cautious as makos are almost as reflective as tuna or marlins. Set your strobes on a low power and angle them outwards to make sure you’re not blowing out the mako’s mirror-like flanks and cheeks. 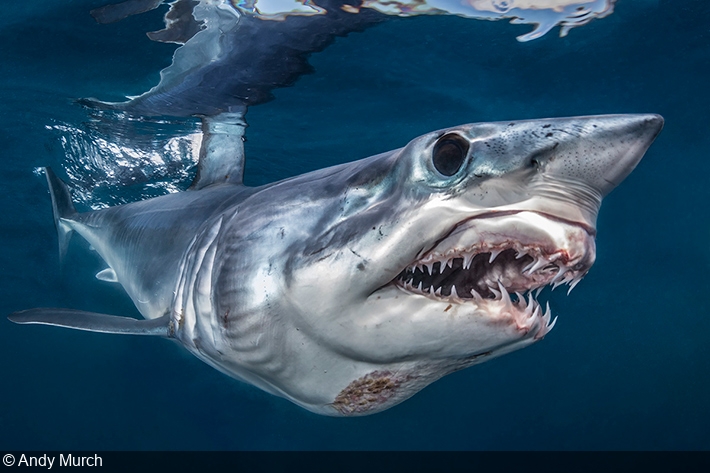 Mako photography invariably takes place in blue water. That means, if your lighting is good, your makos will stand out nicely against the negative space around them. So far so good, but in blue water with no reef structure to balance the image, it is hard to shoot interesting panoramas. A distant mako in the corner of your frame, won’t look very dramatic, so most of time, you will probably want to get close enough for the shark to fill the frame. If that seems a bit daunting in the presence of a feisty mako, keep your distance and look for interesting content in the background, such as light rays dramatically piercing the surface, or another diver closing in for the money shot. 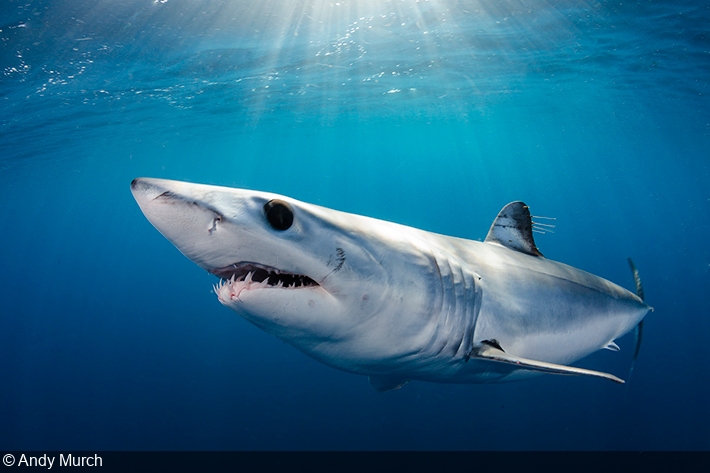 There is no getting away from the fact that makos have exceedingly photogenic dentition. It is good to be creative, but the most popular images of makos are shots of their gaping maw bristling with wickedly curved teeth. There are two ways to nail gape shots. You can either swim into the path of a mako that is approaching a hang bait, and put your camera right next to the bait line while the crew pull it towards the boat. Alternatively, you can retire to the safety of the boat and do essentially the same thing—with a pole cam! The first method is not without risk to life and limb, but it often yields better results because you can very quickly maneuver your camera to get the best shooting angle. 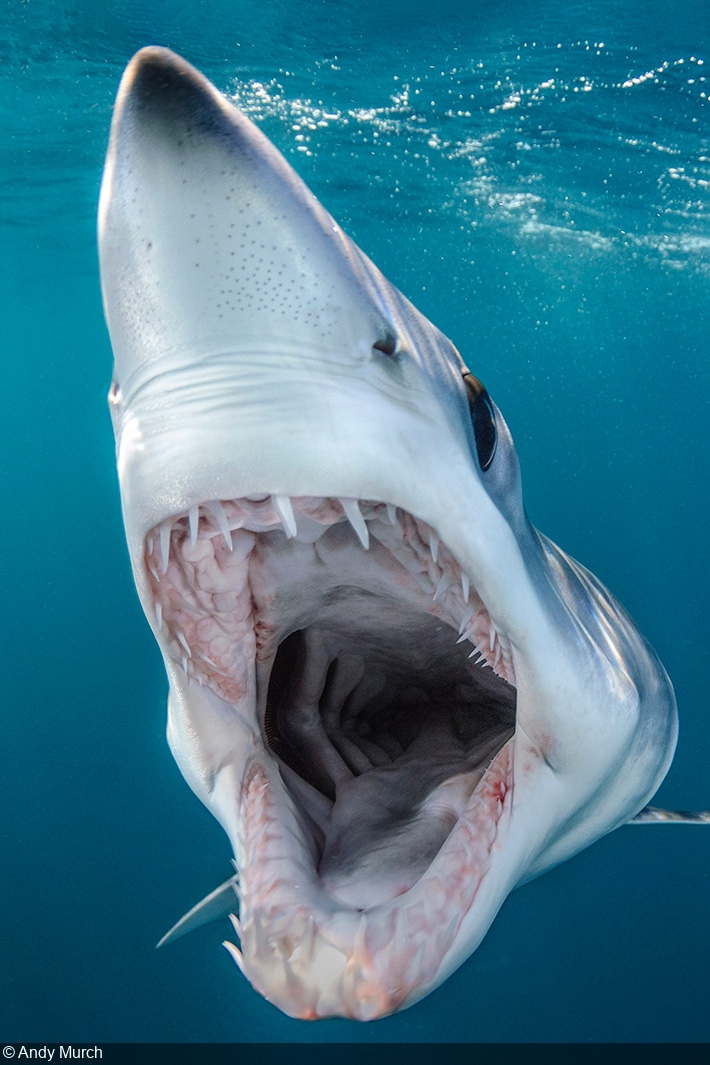 For most people, a shark with a wide open mouth makes for the most exciting mako shot

If you’re going for frame-filling jaw shots, either method is risky for your dome port. Consequently, it is a good idea to use an acrylic dome. Small tooth marks can be buffed out using scratch moving compounds such as Novus Scratch Remover or very fine sandpaper. Deeper gouges are usually a lost cause, but some dome manufacturers (such as Aquatica) will replace just the acrylic part of the dome for a very reasonable fee. Acrylic domes are also not as likely to harm the shark if it does decide to give it a nibble. But remember, the idea is to get very close but not to actually make contact!

Some conservationists say that gape shots are detrimental because they portray makos as monsters. Personally, I disagree. Makos are ferocious predators. In my opinion, portraying them as such, simply makes them even more worthy of respect. 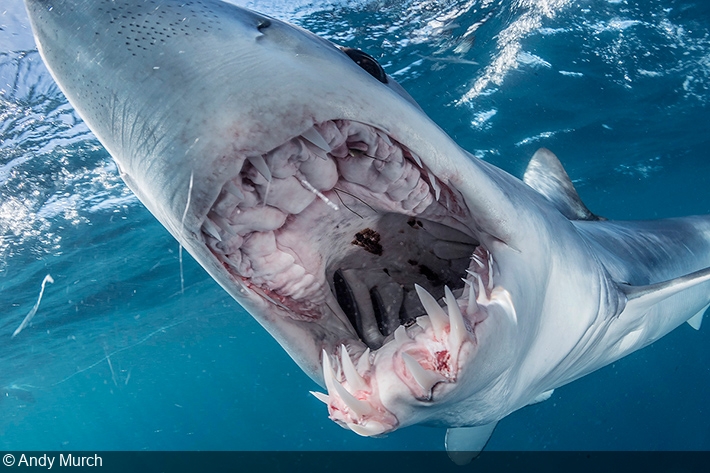 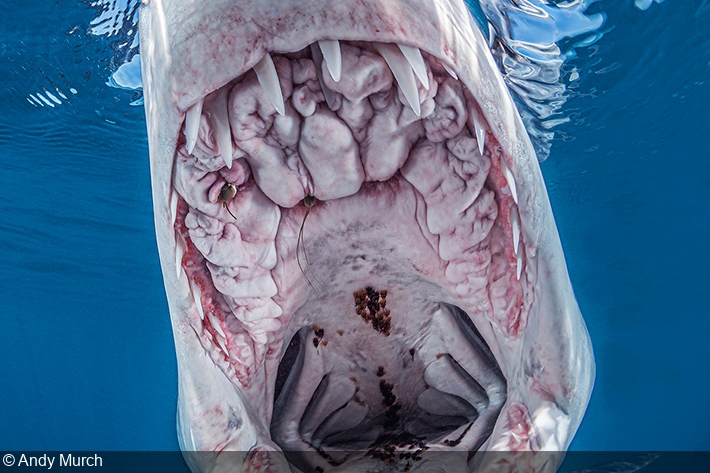 If sitting around for hours on a rocking boat, waiting for a mako to appear, doesn’t sound particularly enthralling, you’ll be pleased to hear that makos share their territory with blue sharks. Blues tend to be a bit more abundant, so they generally show up first and stick around for a long time. Consequently, you may spend far more time in the water than you’d expect, so make sure you have a good supply of spare camera and strobe batteries. 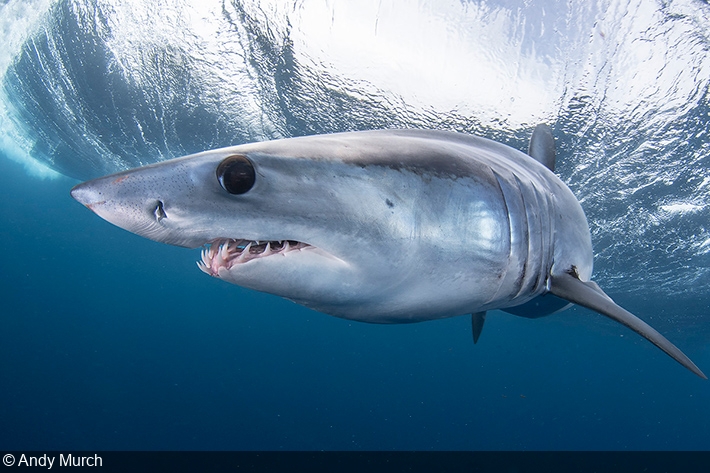 With their dead black eyes, jagged teeth, and muscular, torpedo-like bodies that seem hewn from steel, makos are as impressive, and intimidating, as sharks get. Yet, entice them with chum and allow them to get acclimated to divers, and these awe-inspiring animals don’t seem to be overly inconvenienced by snorkeling photographers.

Still, these are fast, fearless fish that aren’t bothered about putting dents in your dome port—or anything else for that matter—so you’ll need to be laser focused to come away with well-composed, tack-shark shots without getting into any scrapes. But nail that money mako shot—and savor the epic adrenaline hit that comes with it—and you’ll be back, bobbing on the open ocean again, before you know it.