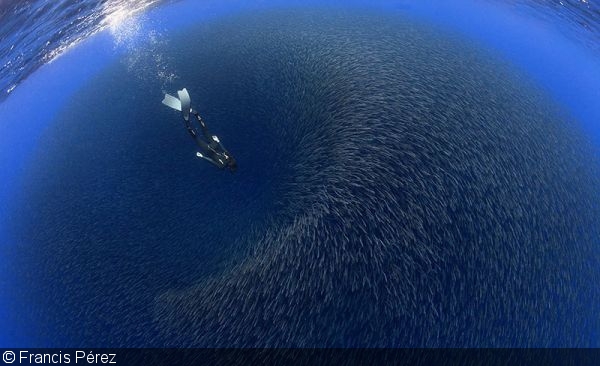 One thing I’m most passionate about in underwater photography is wide-angle photography. Within this large category, few subjects are as challenging (yet rewarding) to photograph as large schools of fish.

Normally, beginning underwater photographers are most comfortable starting off with macro photography or fish portraits, subjects which generally tend to give aesthetically acceptable results from the start. Wide-angle results may initially disappoint even the intermediate shooter, with the requirement to balance artificial and natural light.

If you’re photographing something static such as a wreck or Gorgonian coral, good results can come rather quickly. But when it comes to photographing large schools of fish in motion, things can get more complicated. This article is meant as a guide to improve your fish school photography. 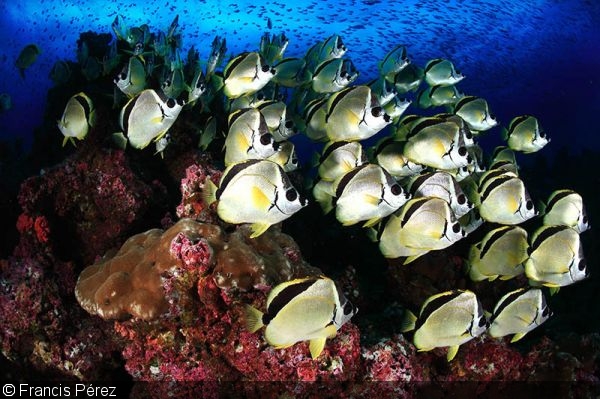 Images of schooling fish are among the most prized in underwater photography, but often challenging. This tutorial aims to simplify the technique

There are two ways to photograph schools of fish: with strobes or just using ambient light. I usually use strobes during “typical” reef dives, but prefer to work with just natural light in the open sea or near the surface, like chasing after giant schools of mackerel. Here, there is more than enough natural light to illuminate the subjects, and strobes (plus arms) only slow a photographer down in the water.

For DSLR and mirrorless shooters, the rectilinear type wide-angle lenses (within the 14–35mm range) are a safe choice and very versatile but don’t give the same perspective as a fisheye lens. These lenses are appropriate when it’s not possible to get up close to the school of fish. Sometimes I prefer to use a fixed 20mm lens, especially when there are many divers nearby or lots of bubbles disturbing the shot.

Compact users will want to add on a fisheye or wide-angle wet lens to their setup to minimize the amount of water between them and the subject, as well as fit as much of the school as possible into the frame. 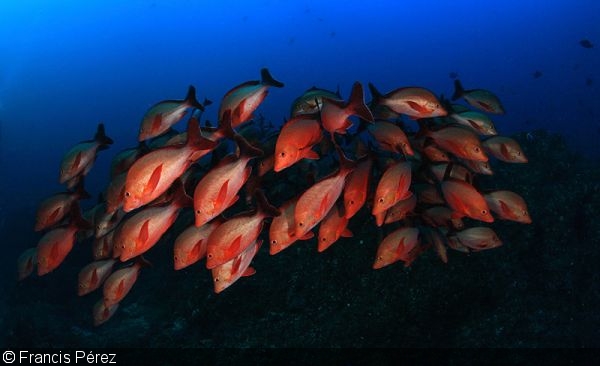 When on traditional reef dives, a wide-angle zoom lens gives more versatility when approaching shy schools. The last thing a photographer wants to do is “break up” the school

How to Photograph Fish Schools

It’s not all that difficult to capture a “proof” shot of schooling fish. But to capture a great shot, one of the most important things to consider (with or without flash) is your approach. Always approach calmly, quietly and with respect so the giant ball of fish doesn’t take flight or divide.

Another important consideration during the approach is paying attention to the negative space. Almost always the best shots are with a blue background, so before getting near, it’s important to choose the correct shooting angle. 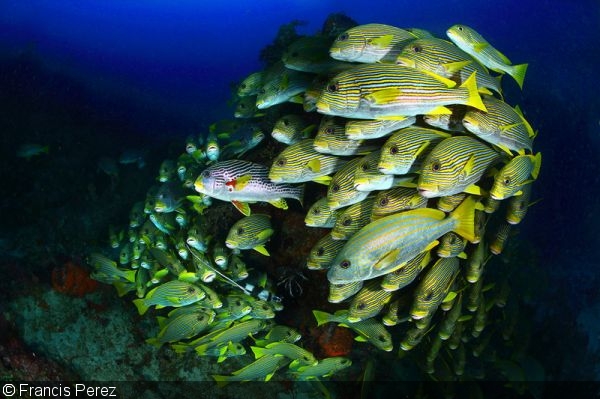 During your approach to the school, pay attention to the background. Framing the school against open blue water is often more visually pleasing than having a cluttered reef in the background

When using strobes to photograph schools of fish, it’s not important to have large, powerful strobes. In fact, sometimes more-compact flashes can be easier to maneuver in the water.

It’s better to have two flashes on long arms to achieve the best coverage possible—positioning the flashes wide apart at the nine and three o’clock positions. I also prefer to always use diffusers to achieve a softer quality of light, especially when photographing reflective fish.

To light the foreground with flash and to leave the background naturally lit, basic metering skills are required. However, a good start in most tropical conditions is f/8 for aperture, and to adjust shutter speed based on the lighting situation and how fast the subjects are moving. Even using strobes to freeze subjects, some swift schools will leave a slight blur at shutter speeds below 1/100s. 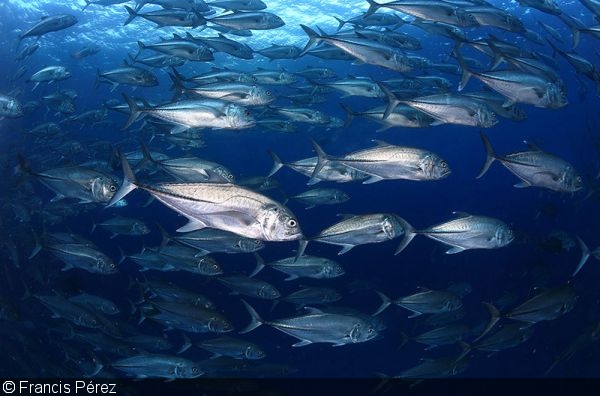 When using strobes on reflective fish like the jacks above, it’s better to start with the minimum strobe power and increase it as needed so as not to “blow out” the fish on the first try

The ideal output of your strobe varies greatly, largely dependent on the color and texture of the fish you are photographing. For example, with super-reflective schooling fish like jacks and barracuda, you’ll probably want to start at a low output—such as 1/4 power—and work your way up in power. For darker schooling fish, like sergeant majors or squirrelfish, you can start at a higher output—such as 1/2 power—without fear of blowing out the subject.

These basic skills must be adapted in each specific situation with differing variables. Some variables include the visibility of the water: clear water is easy to light while turbid water often requires more nuanced strobe positioning. 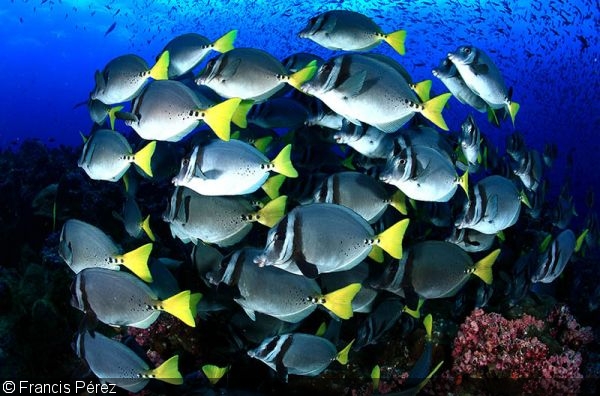 With less-reflective fish, you can use higher strobe outputs to bring out color and detail, while keeping a fast shutter speed and closed aperture (f/8) to produce pleasing blue hues

The technique I use to photograph schools of fish without strobes is very different. It most often is appropriate when in the open ocean, and is more or less in line with the technique described by Rodrigo Friscione in Pelagic Life Underwater Photography.

Photographing giant schools of fish in the open ocean is very exciting, but requires the photographer to be in good physical shape. Many of the best opportunities require freediving, since it’s almost impossible to quickly swim towards a fish ball when slowed down by tanks and strobes. To photograph a school of fish in the open sea is more difficult, as the shoal can quickly move in any direction or even disperse if threatened. More than ever, it’s important to approach calmly and quietly.

When leaving the strobes back on the boat, one of the most important factors to consider is how to properly use the natural light. It’s imperative to have the sun positioned behind your back so as to avoid shadows. This is easier said than done when constantly moving about to keep up with schooling fish! 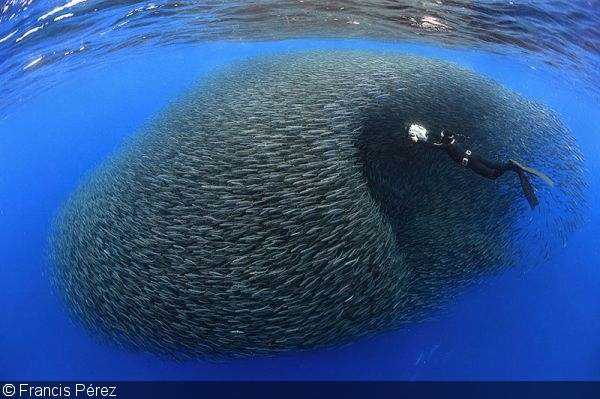 Leaving the strobes on the boat makes it easier to move around schooling fish at the surface. There’s also plenty of natural light at this depth to illuminate the subject

Whenever I feel there could be an interesting subject to photograph, I get into the water and take some test shots right away—either of my fins or another photographer. This allows me to sort out my settings based on the light and water conditions before I even approach the subject.

The vast majority of time I shoot in full manual mode, adjusting shutter speed, aperture and ISO values to suit, shooting in high speed bursts if the fish are moving quickly. Having said that, keeping track of all three exposure settings can be a challenge. One option is to try shutter priority, setting your shutter high enough to freeze the action and letting the camera determine the proper aperture value.

In terms of post-processing, I always shoot in RAW format to adjust the white balance during editing. Another option (especially for videographers) is to white balance manually in the water using a gray card, but this is difficult in the open ocean when chasing after fish schools. A more suitable option for those not shooting in RAW or using manual white balance is to consider the use of red filters to color balance and bring back contrast to the image. 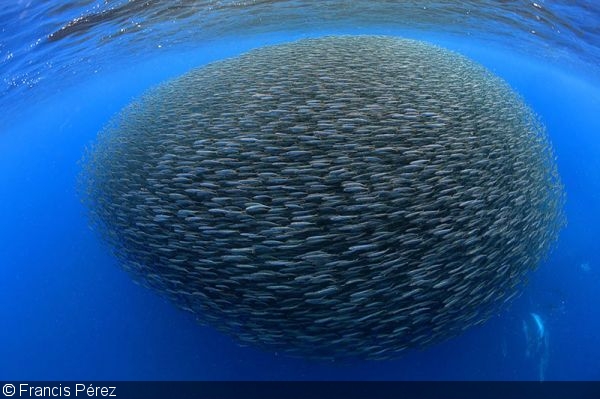 Shooting in RAW gives the opportunity to delicately adjust the white balance in post-process, rather than doing it in the water with a neutral gray slate

I hope this article has been of some help to understand a little more about the techniques for photographing schooling fish, whether on a dive or freediving. Encountering a large school of fish in the wild is an amazing experience, and capturing this with your camera successfully is hugely satisfying. 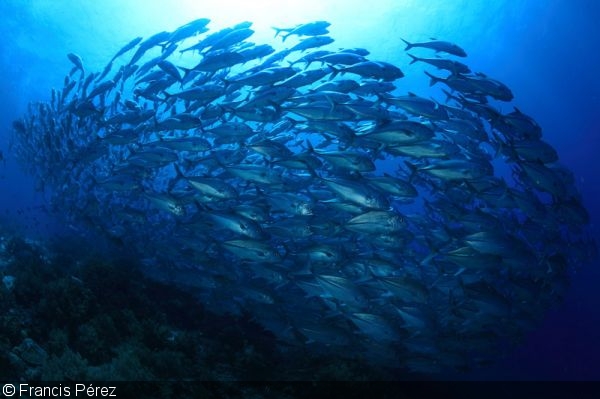