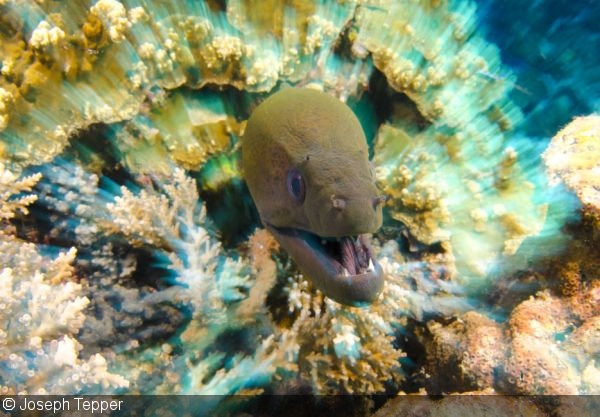 One of the primary rules for photography is to have a crisp, clear subject. Having motion blur is largely seen as a negative distraction in an image. But when used right, motion blur can bring a sense of movement and excitement to an image.

A variety of techniques and settings can be used to create purposeful motion blur in an image. Perhaps the most common method for achieving this result is by using the “rear-curtain sync” flash mode on your camera, as it combines blur with the crisp detail provided by strobe light. Here is a guide to using rear-curtain sync mode to produce creative blur in your underwater images.

What Is Rear-Curtain Sync Mode?

Your camera has several flash modes. Most likely the one you’re used to using is called “front-curtain sync” (also called “first-curtain sync”). With this “standard” mode, the flash goes off right when the shutter opens, or at the front end of the process. The flash (or strobe) fires when the curtain opens, freezing the action, and the sensor continues recording until the shutter, or the curtain, closes. When shooting a moving object, therefore, the motion blur is captured after the flash freezes the action—which creates an unnatural-looking result.

Consult your camera’s manual to find out how to switch to rear-curtain sync mode. In most cases, especially with DSLRs, you can change the flash mode without going into menus. 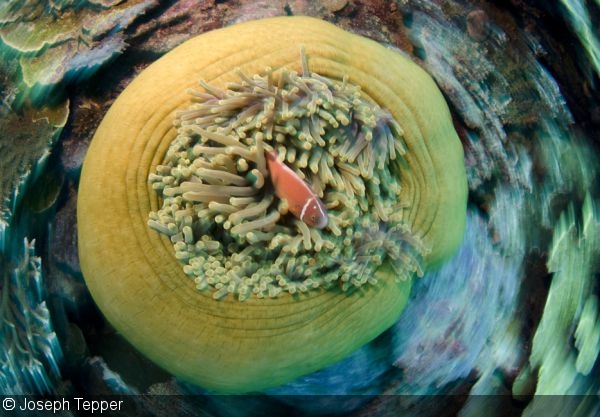 By twisting your camera and using a slow shutter speed, while in rear-curtain sync mode, you can create blur around a subject for a creative effect

When to Use Rear-Curtain Sync for Underwater Photography

Like other creative techniques, using your camera’s rear-curtain sync produces images that stand out from the crowd. Having said that, you don’t want to go around using it all the time.

Rear-curtain sync works best when it’s used to create a sense of motion and drama. As a result, it lends itself to large, fast-moving subjects such as sharks and swimming turtles. It’s important that the subject not be big to the point where your strobes cannot cover it accurately. It is the strobe at the end of the shutter that provides the frozen subject after the blur. Alternatively, you can create the motion yourself by panning on slower, or non-moving, subjects.

Rear-curtain sync is best used to show motion and excitement in an image. There’s more of a rush to this image of feeding sharks thanks to a slight blur

Rear-curtain sync also works well for some macro subjects that have some motion. Examples include anemonefish in the current and fish portraits. In general, you’ll want to reserve rear-curtain sync for subjects you have had experience photographing before and—more importantly—won’t be disappointed if you don’t come home with a shot. Rear-curtain sync can be tricky, so try it on subjects you’ve photographed a million times.

Rear-curtain sync should only be used when shooting manual or shutter priority. The key exposure setting is shutter speed: Too fast and there won’t be any noticeable blur; too slow and the subject will be an unidentifiable smear.

As a general rule, for tropical, well-lit water, you should start around 1/15s and adjust from there. The appropriate shutter speed is dependent on the speed of the moving subject or how quickly you pan the camera (more on this below). Faster subjects like sharks might require only 1/20s to achieve proper motion blur, but a cruising turtle might need 1/10s for the same amount of blur. 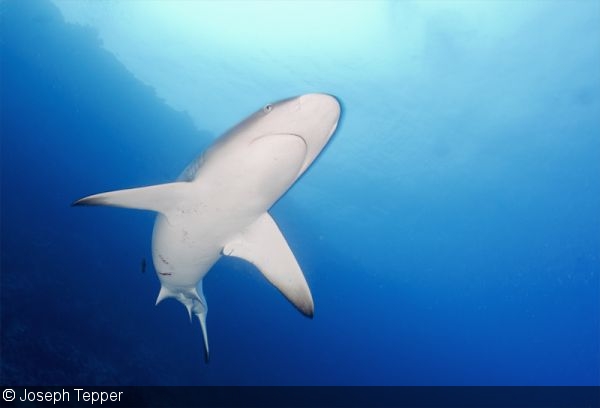 You can create more of a subtle blur effect with quicker shutter speeds (faster than 1/20s), or more obvious blur by slowing down the shutter speed

It’s also important to note that there is no ideal amount of blur, or shutter speed. Some photographers will prefer a crisper, more identifiable subject. Others might like a more complete blur.

Since you’re letting in more natural light with a longer shutter speed, you’ll need to compensate exposure with aperture and ISO. It’s important not to close your aperture too much, as this will also reduce the amount of strobe light hitting your camera’s sensor. You’ll need this strobe light to partially freeze the subject at the end of the curtain. The best way to compensate is to set your camera to its lowest ISO (100) and then increase the f-stop value until the ambient light is properly exposed.

The amount of strobe power is largely dependent on the aperture value, which is a reflection of the amount of available light. If you’re in shallow, bright conditions shooting a slow-moving subject—for instance, 1/10s at f/25 (ISO 100)—you’re going to need to have at least three-quarters strobe power to illuminate and freeze the subject.

On the other hand, in deep water with less light and fast-moving subjects—such as 1/20s at f/11 (ISO 100)—you may need to lower strobe output to half power or less. 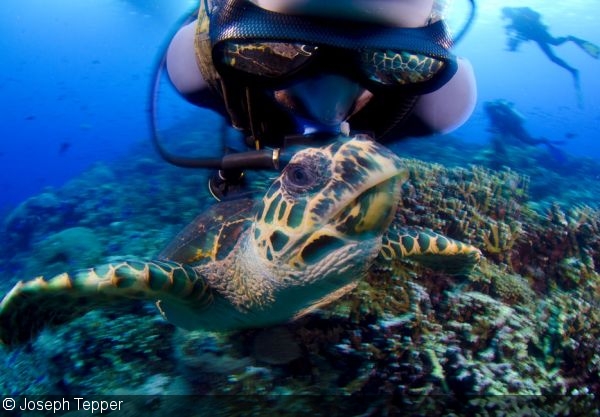 Strobe power will be determined by the aperture required to compesate for the natural light let in during a longer shutter speed. Mostly, the apertures required will be above f/18, meaning higher strobe power is needed

Again, there is no perfect amount of strobe power. Your scene will largely be exposed by natural light, since such slow shutter speeds are used. The strobe really serves two purposes: to create some stop motion in the image and provide a touch of color and contrast to the subject. If you choose less strobe light, the subject will have more blur and lack some contrast. Higher strobe outputs will better freeze the motion and add color.

Choose a Comfortable Subject: This isn’t an easy technique, so you’ll want to choose a subject that you are comfortable with, and that—almost as important—is comfortable enough with you that it will stick around. It takes a few shots to get the right shutter speed and strobe output, so you don’t want to waste an image on a flyby chance encounter with a manta ray. Stick to front curtain sync unless you have time to fine-tune exposure and composition.

For Macro, Shoot into the Blue: If you can, frame your macro subject against the open water, by shooting up or out. This will have the added benefit of including a blue water background, in addition to the blur effect. 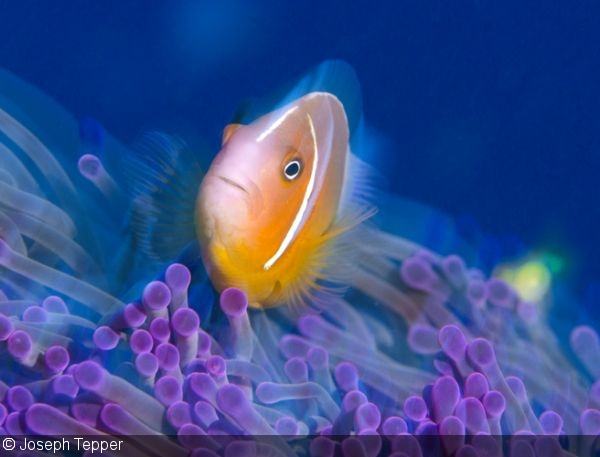 Using rear-curtain sync and slow shutter speeds can also be used to add a blue water background to macro images. This image is a combination of bright colors and motion blur

Try Panning: For some subjects, you’ll have to create the blur yourself. This can be achieved by panning, either side to side or back and forth. Alternatively, you can create a swirl blur by swiftly rotating your camera as you fire the shutter. With this technique, you’ll want to keep the subject as close to the center of the frame as possible, as this will be free from most of the blur. Timing is key with all of these movements, as the motion must take place while the shutter is open. Experiment with different panning motions, as each produces a different effect. 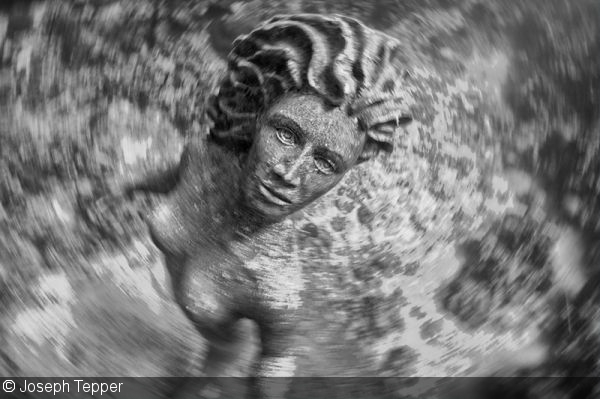 Here, twisting the camera clockwise as the shutter fires produces a swirl blur, leaving the statue’s head crisp and sharp

Go Abstract: Not every photo has to have a single identifiable subject. Abstract underwater photography uses colors, patterns and textures to create a compelling image. These qualities can easily be enhanced through the blur provided via rear-curtain sync. Colors and textures blend together seamlessly when you combine a slow shutter speed, rear curtain, and panning. 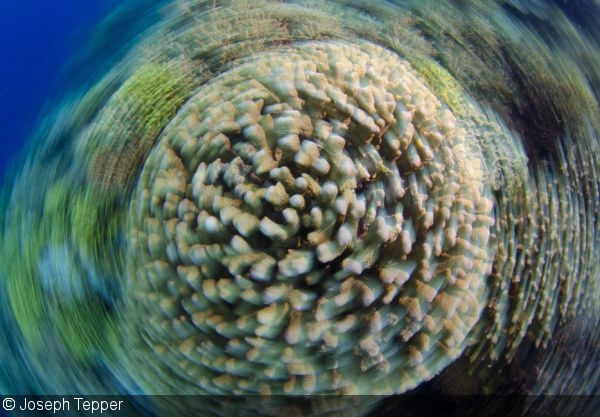 Any subject can be made more interesting by motion blur through rear sync, including this coral reef abstract scene

The motion blur created by slow shutter speeds and rear-curtain sync is not to everyone’s taste. It certainly isn’t an easy technique to master either. But when used correctly, it can create unique images that ooze energy and excitement. The ocean is a place in constant motion—our images should convey this.