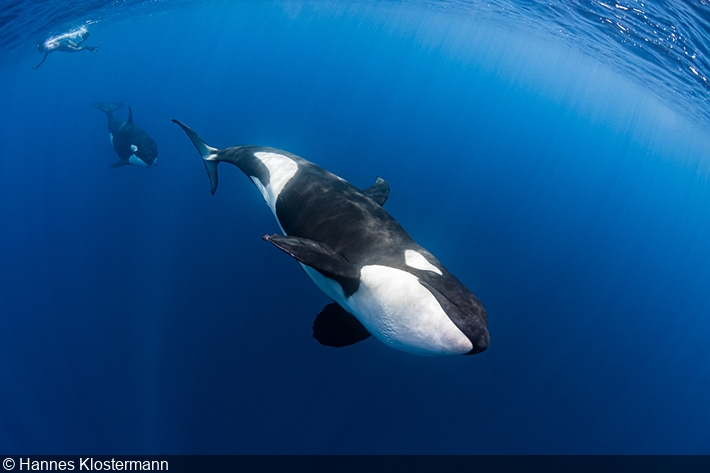 The ultimate pelagic encounter: Orcas at the surface in Baja California, Mexico

For many photographers, being out in the big blue with nothing but your subject to keep you company is the ultimate dream encounter. Whether it’s baitballs, whales, sharks, turtles, dolphins or other big animals, there’s just something about this experience that is truly special. However, being able to photograph pelagic animals is often not only a dream come true, but also a real challenge. You need to be completely in the zone when that once-in-a-lifetime moment unfolds in front of you. 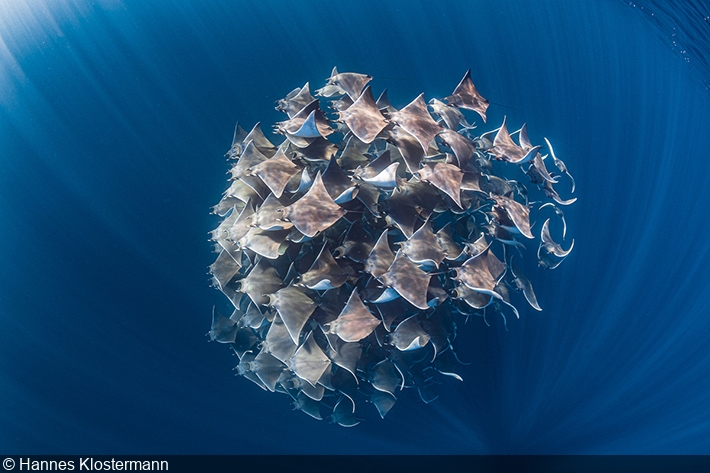 When you’re out at sea, it’s often the subject that chooses you, not the other way around. Still, heading out with an experienced captain and guide can make all the difference in finding those elusive animals. It really is like looking for a needle in a haystack. Even a few thousand dolphins can be extremely hard to find in open ocean.

One of the keys to having world-class pelagic encounters is to do your research and find the best areas and seasons for the animals that you want to photograph. Pelagic animals are often migrating, so being in the perfect area at the wrong time will give you exactly zero sightings. Conditions are also an important factor. I would take fewer animals in perfect conditions over lots of them in pea soup. The orca image at the top of this article is a good example of how conditions affect the image. Just a few days prior to this epic encounter, I had seen the same pod in a different area where conditions were downright awful thanks to some recent heavy rainfall. Despite them coming even closer on that occasion, the pictures turned out very poorly. There is just no cheating physics! 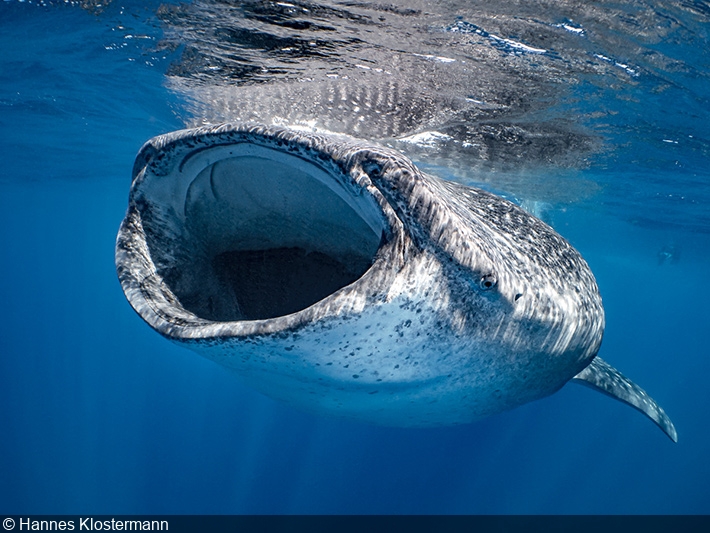 Whale sharks are excellent subjects as they are huge and come super close, Isla Mujeres, Mexico

Once you find a subject, a good captain will know how to position the boat to give you your best shot at actually seeing the animal to begin with. But even if everything is perfect, these encounters always happen almost entirely on the animals’ terms.

On a trip to Socorro a few years ago, we came across a group of minke whales during our crossing. As they seemed pretty relaxed, the crew lowered the zodiacs and a few of us tried to swim with them. At one point, one of the whales was no more than 30 feet away from our zodiac and right at the surface. We got in the water right away and despite being in crystal clear, blue water none of us even got a glimpse of the animal. We tried a couple more times, but it just wasn’t meant to be that day. Animals don’t always want to interact with us, and as guests in their home we need to respect that. 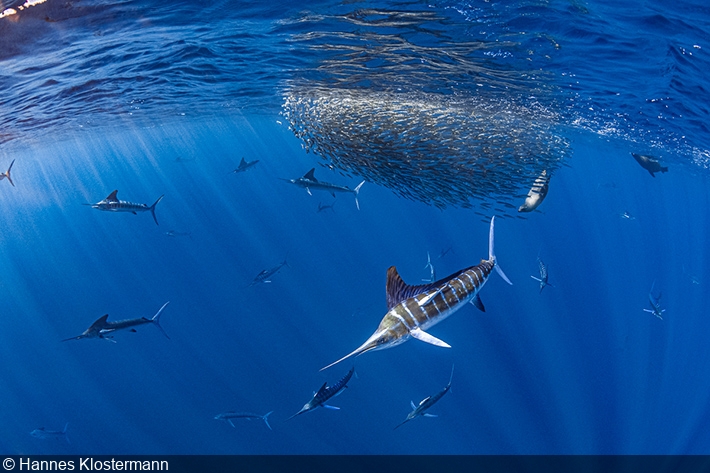 Your ideal subject is one that either does not care that you’re there, or one that is actually interested in you. One of my absolute favorite subjects is the striped marlin. We get a lot of them here in Baja during fall, and when they’re hunting they could hardly care less about our presence most of the time. Whales are often the polar opposite of that. In certain places like Tonga and French Polynesia, they can be very curious and even playful, but when they’re on the move, they will often avoid us as much as possible. Your best bet is to position the boat well ahead of them and slightly to the side, and then get in as quietly as possible and swim to intercept them without much splashing. Then, wait for them to come to you and be prepared.

Due to their fast-paced nature, pelagic encounters usually involve snorkeling or freediving. On scuba, you simply lack the agility required to get in the right position and stay there long enough to get good images. Since you will be moving quite a bit, you should generally leave your strobes at home or on the boat. They create lots of drag and will tire you very quickly when trying to swim towards or beside almost any animal. Instead, you should make best possible use of the natural light available, which is often plentiful right at the surface. Remember that for maximum detail and color, the sun should be behind you and for silhouettes, it should be behind your subject. Shooting across the sun helps to bring out texture.

As most classic pelagic subjects are big animals, a wide-angle lens will be your first choice. Fisheye lenses work great on many animals, especially ones that are somewhat round anyway, which helps in making the inherent distortion less obvious. Pointy subjects, like most sharks, tend to look better with a rectilinear lens or a zoomed-in fisheye like the Tokina 10–17mm at 17mm. At the end of the day, it is a matter of preference. On my Nikon D500, I tend to switch between the Nikon 10–24mm rectilinear and the Tokina 10–17mm fisheye. 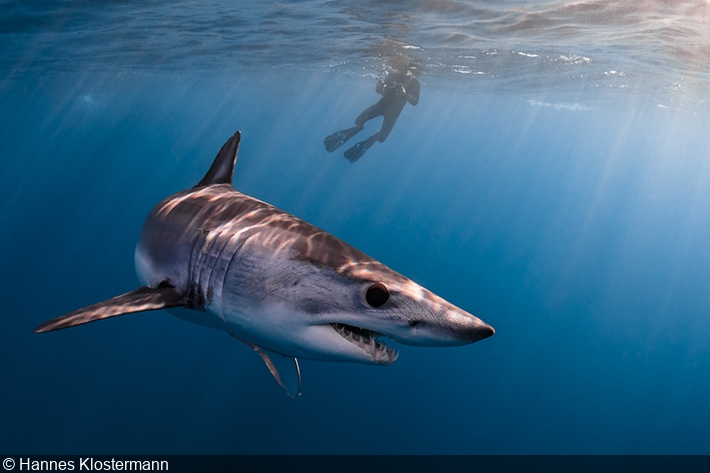 Wide-angle lenses are essential for close encounters with pelagic sharks 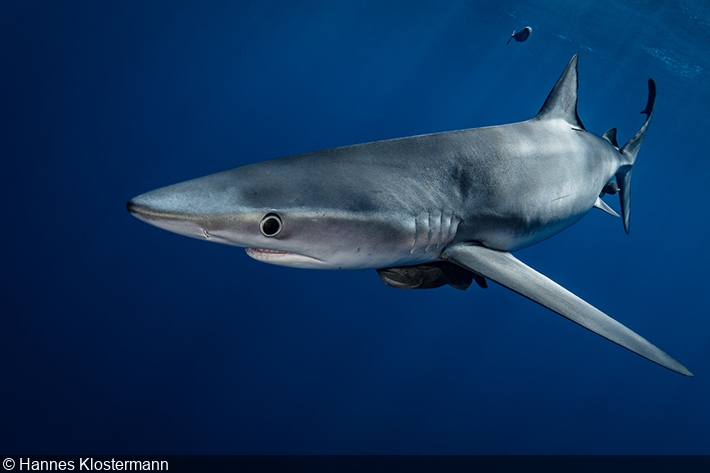 I find that the single most important thing when shooting pelagic animals is preparedness. You need to be ready to shoot the second you hit the water or you might miss the shot. These encounters often happen very quickly and if you need to set up your camera first, the animals might have already passed you by the time you’re ready to press the shutter. There are a few exceptions to this though. When chum is used to attract sharks to the boat, you usually get lots of opportunities to get exactly the image you want. Or you might hit the jackpot and see a static (i.e., non-moving) baitball. That’s when you can really dial everything in and get just the composition you’re after. 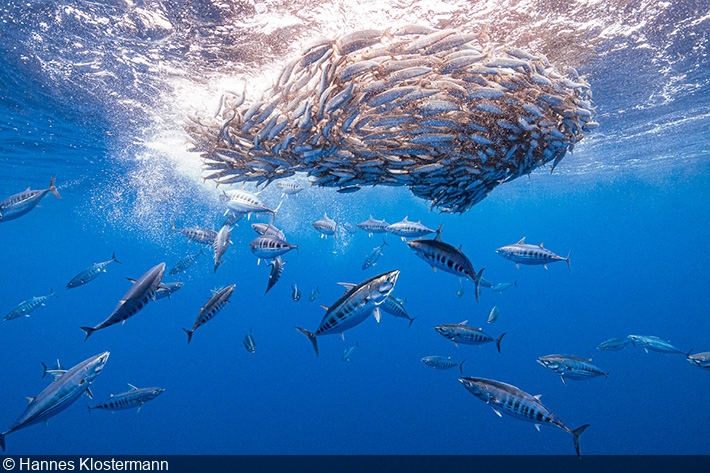 Finding a “static” baitball is rare, but when it happens you can capture amazing action shots

In terms of settings, in my opinion, the most successful option is to use Manual mode in combination with Auto ISO. This will allow you to choose exactly the shutter speed and aperture that you want (or that the scene demands), while not having to think about getting the exposure right in the heat of the moment. This generally works best with some negative exposure compensation (for me between –0.7 and –1.0 works well) as cameras tend to overexpose underwater.

Shutter speed can vary greatly depending on your subject. When you’re watching some of the fastest fish in the sea hunt their prey, you’ll want use at least 1/640s, if not faster. Other subjects will allow for much slower speeds but given that you will usually be bouncing around quite a bit at the surface, it is a good idea to keep the speed fairly high anyway to avoid heartbreak during image review on the computer due to camera shake. That is why I personally tend to steer clear of anything slower than 1/200s in most situations. 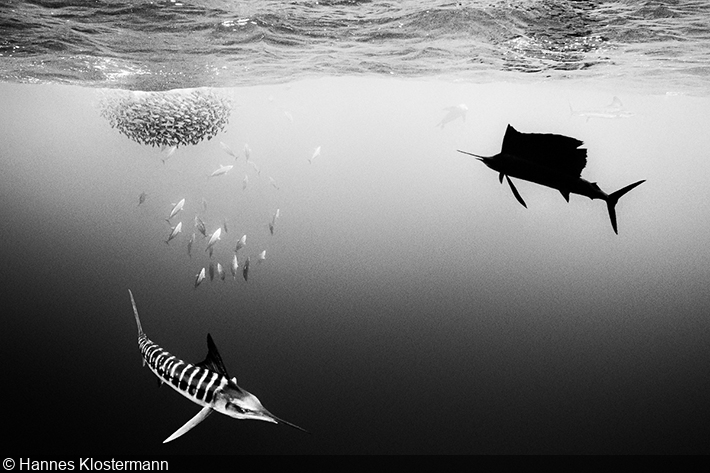 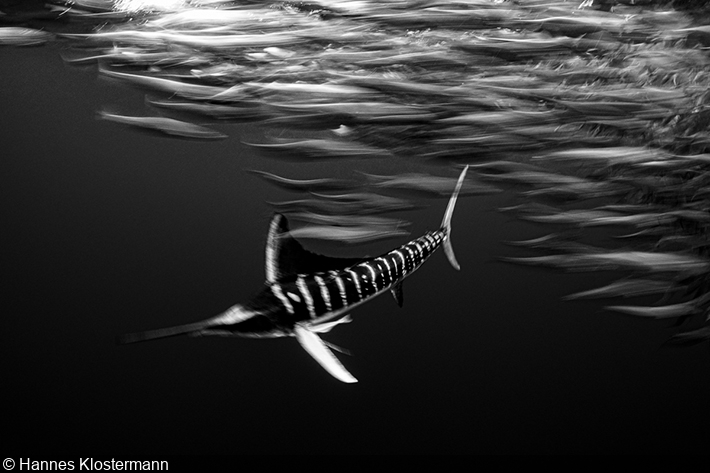 Burst shooting is an excellent way of increasing your chances of capturing the peak of the action. The faster the subject, the higher your burst rate should be. A good starting point for aperture would be f/8 on an APS-C camera and a big dome. Close it a bit further when shooting full frame or using a smaller dome. You can even get away with choosing slightly wider apertures, as the soft corners that this causes will often just be blue anyway. Whatever your settings, make sure you review your images between drops so you can adjust for your next opportunity. Zooming in to 100% on the screen will help a lot with judging sharpness and potential camera shake.

Focus is another key factor for good images. Thankfully, since you will most likely be using a wide-angle lens, you do get plenty of depth of field and don’t have to adjust focus all that much most of the time. I recommend back button focus specifically for that reason. If you have time before an animal gets to you, you can try and focus on the tip of your fin and lock it there. This avoids frustration when the camera’s autofocus decides to focus on something floating past at just the wrong moment. 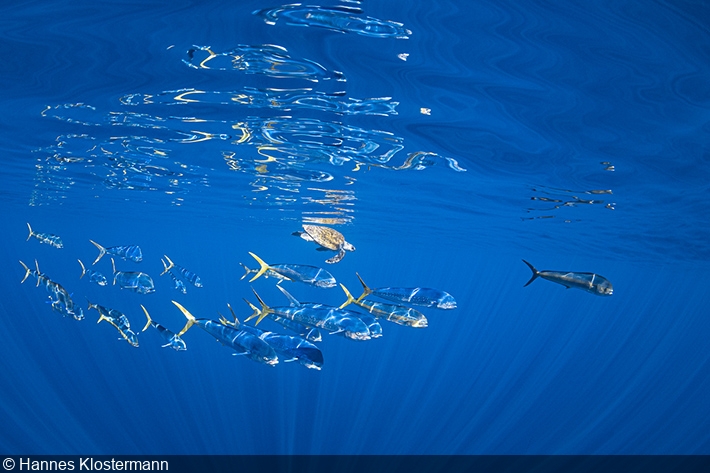 A turtle among a large group of mahi-mahi. You never know what you may find in the pelagic zone!

While this article should give you a good starting point for your pelagic adventures, all of this advice  is entirely useless if you don’t get to see the animal you’re after. Being in the right place at the right time really is the secret ingredient to outstanding images of pelagic animals. So make sure you maximize your chances by heading out with the right people as often as possible. I cannot wait for our upcoming marlin season! 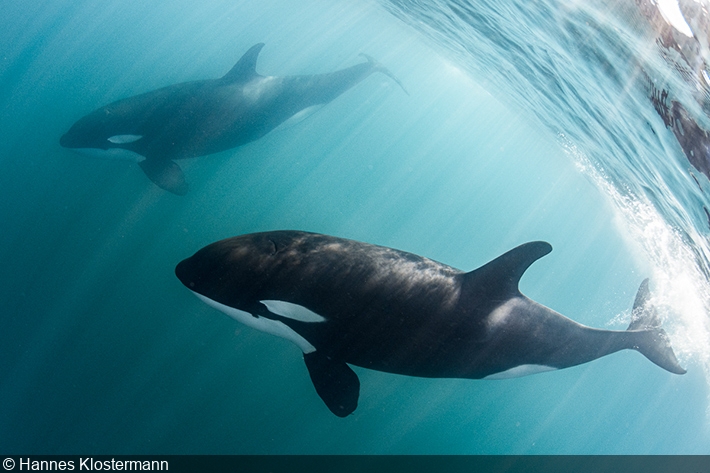 Being in the right place at the right time can result in life-changing encounters with iconic marine life!