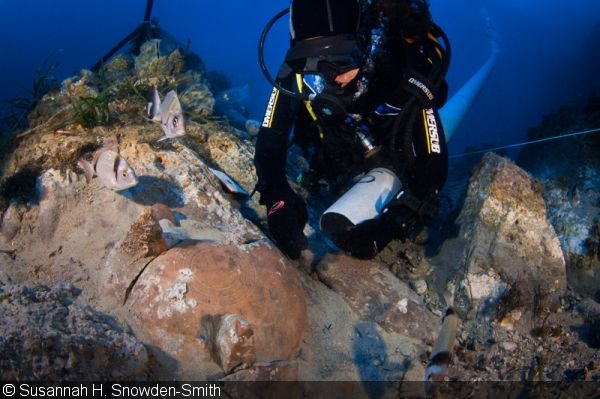 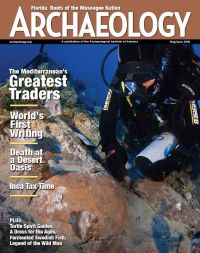 Sometime around the 2nd Century BCE, a ship departed a Sri Lankan river and sunk nearby. More than 2,000 years later, I am 110 feet under the surface in the Indian Ocean, with an underwater camera in hand, hovering over an ancient spearhead. I am the photographer on this ancient shipwreck excavation and my mission today is to photograph this artifact in a way that highlights both its mystery and context, making it appealing for publication.

I angle my homemade snoot toward the spear—a snoot constructed just a few days earlier from a plastic funnel with a narrow end (about 1/4-inch opening). I click the shutter, and a slender beam of light illuminates the spearhead and bits of sand glittering around its resting place. A few adjustments to my settings and there’s another click. A couple of months later this photo lands on the pages of Archaeology magazine.

For me, the inspiration to take a break from shooting fish and to focus on millennia-old artifacts comes from a childhood fascination with archaeology. As an eleven-year-old girl, I read just a bit about underwater archaeology as a segment of our science curriculum. But even those few pages of a textbook changed my life, and I’m hoping this article will help inspire others in the same way. From that moment forward I was going to be an underwater archaeologist. As I pursued this goal, my passion for photography was simultaneously growing, and I decided to combine those interests. 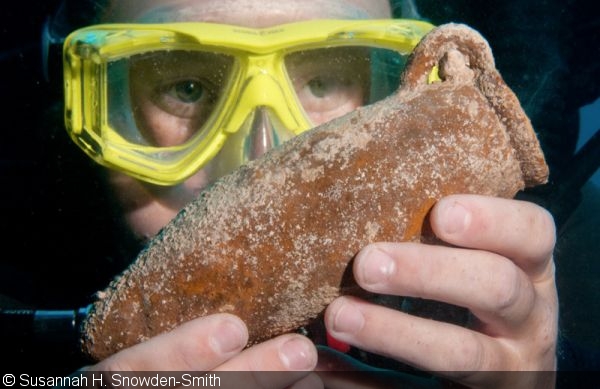 Bajo de la Campana 7th-Century BC Phoenician shipwreck excavation, La Manga, Spain: An archaeologist models with a “perfume bottle” or “dipping jar” excavated in about 45 feet of water.  The jar was raised at the end of the dive

I pursued this goal vigorously, earning my Open Water certification in high school, followed by a degree focusing on archaeology and classical art history in college. To date, my work has taken me to underwater excavations in Sri Lanka, Spain, Egypt and Turkey, at depths ranging from 45 to 150 feet.

I work with the Institute of Nautical Archaeology, out of Texas A&M University. It’s incredible work. The shipwrecks I photograph are time capsules: Most of them have been buried in sand or otherwise left undisturbed. A chill goes down my spine when an object is uncovered, knowing that the last time a person touched it was in antiquity. And I am writing this guide to underwater archaeology so that one day you can share this feeling, too. 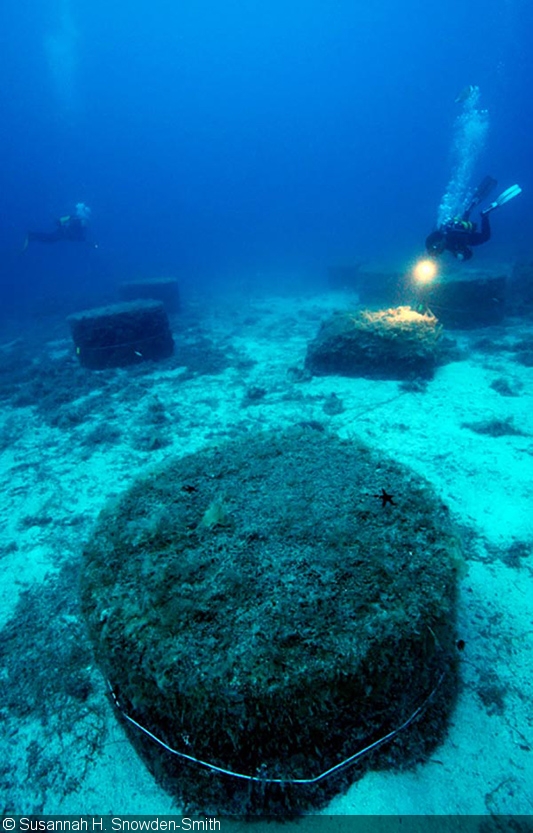 Kizilburun 1st-Century BC shipwreck excavation, Turkey: Divers model with a Doric column drum (left) and the capital (right). This shipwreck was carrying an entire ancient temple column in nine pieces: eight column drums and the top piece, the capital

Archaeology underwater photography has its own specific skill set. Having a background in the field is crucial. We work with fragile artifacts and ancient shipwreck wood that can be easily damaged. As a result, we often take our fins off underwater and tiptoe across the site. I like having bare feet, using just my toes on the sand so that I am attentive to where my body is at all times. The shoots are almost exclusively on the seabed, which can result in a lot of silt being stirred up into the water column.

There are some key elements to being a successful underwater archaeology photographer and diver. In addition to being a competent diver, a thorough understanding of managing oneself on an excavation site is mandatory. We always work with local teams—being open to foreign cultures and customs makes my job much easier and fun. 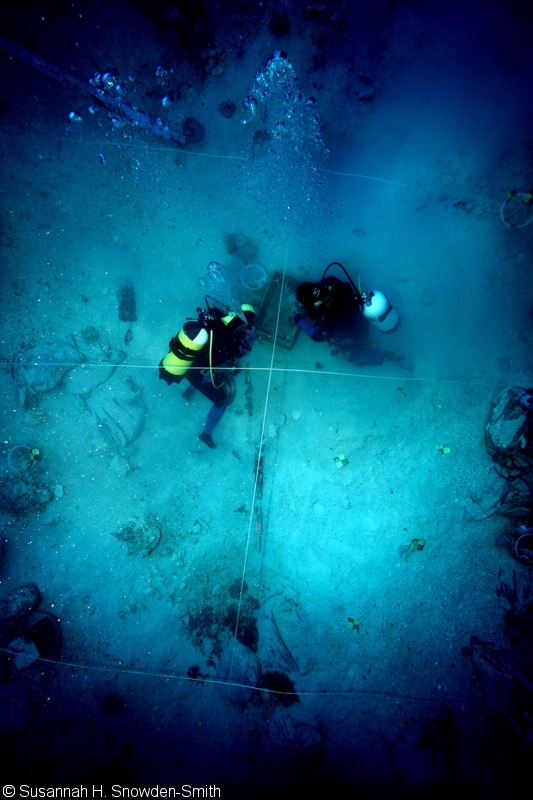 Living in a remote area means improvising when a piece of my photo gear breaks in the field. Being able to work and live in close quarters with the same people from weeks to months on end is key. A willingness to survive on different foods requires flexibility: In Sri Lanka, we ate a lot of dahl curry and buffalo curd (with the occasional stray buffalo hair!). And, finally, poor weather and sea conditions can keep us from diving for weeks at a time—but in the end, there’s no place I’d rather be! 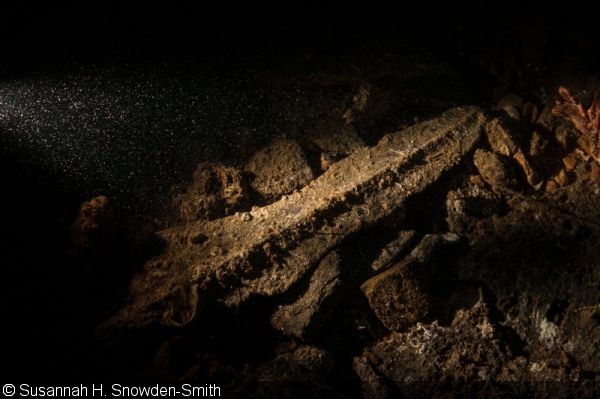 Godavaya 2nd-Century BC shipwreck excavation, Sri Lanka: An ancient spearhead is illuminated on the seabed with a ray of light from a snooted strobe

Underwater archaeology teams typically dive in shifts to allow each person space to work in their excavation grid square. Because of this, I will usually take the first dive to enable me to photograph while the site is undisturbed. While concentrating on getting that precise shot, I must maintain situational awareness and spot-on buoyancy control.

Several of the excavations I’ve worked on have been very deep (down to 150 feet) so our bottom times can be very limited. Additionally, the longer an excavated artifact is left on the seabed, the more possibility of damage or theft, so there is often only one short dive to get the shot, two if I'm lucky. Then the artifact is raised, and heads to the conservation lab of whatever country we are working in at that moment. 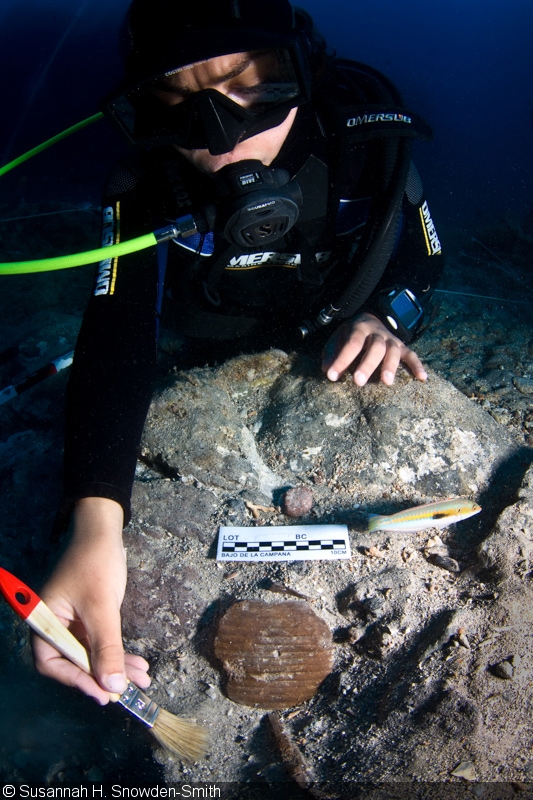 The type of underwater archaeology images I shoot varies, and I employ a variety of techniques. Photographing an artifact in the foreground, coupled with ambient light and a silhouetted excavating diver can tell the story of the excavation. I’ll use a single strobe to show texture on an artifact.

I also love using using split shots (over-unders) to show the moment an artifact reaches the surface for the first time in millennia. Using snoots for direct light can be particularly useful in highlighting a specific artifact among other object scatter. Double strobes light up a large scene. 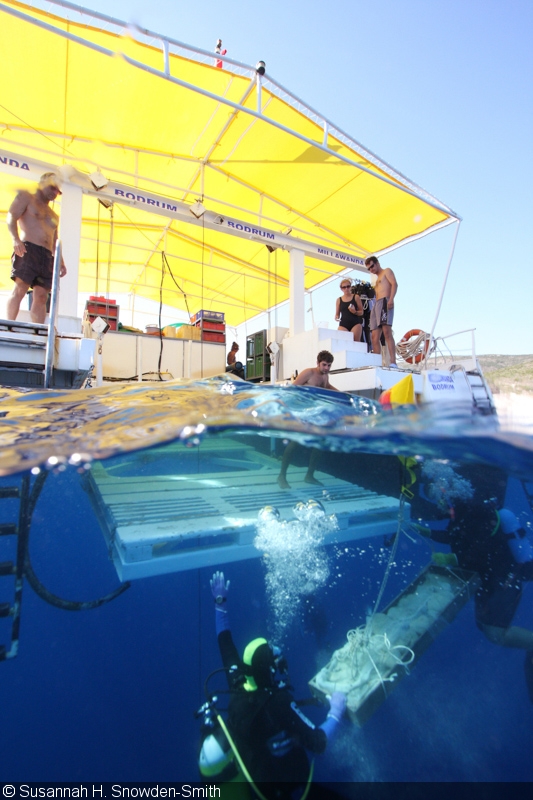 Kizilburun 1st-Century BC shipwreck excavation, Turkey: Over-under shot of archaeologists as they raise a fragment of ancient shipwreck wood in a specially constructed crate to the dive boat platform

I sometimes utilize models in my shots. These are skilled underwater archaeologists who also happen to be excellent models. When I’m incorporating models in an image, it’s important to have the shot well planned to avoid any unnecessary movements. The model and I will go over the shoot in detail on the surface, covering hand signals, body positioning and the type of photographs I’ll be taking. 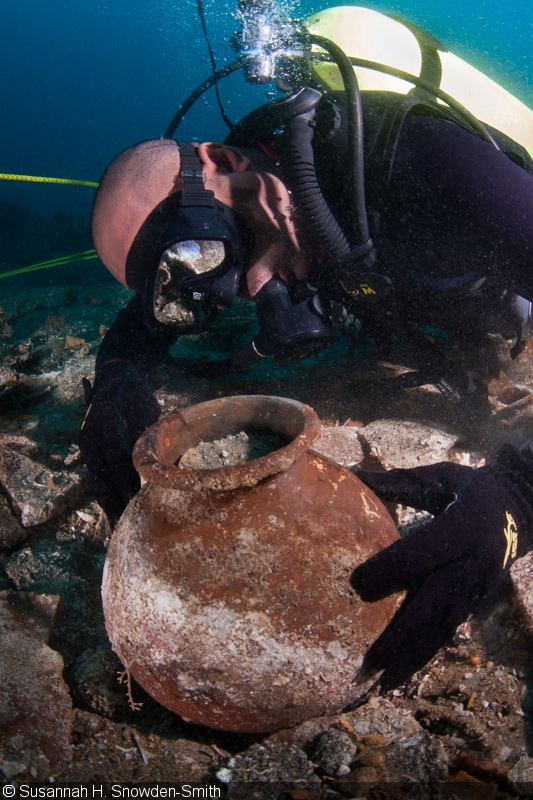 Godavaya 2nd-Century BC shipwreck excavation, Sri Lanka: A 2,000-year-old complete pot on a Sri Lankan shipwreck is examined by an archaeologist on the seabed at 108 feet. The artifact was raised at the end of the dive. I angled my shot in order to have the diver’s mask reflect the artifact

Tips for Getting Started in Archaeology Underwater Photography

Archaeology underwater photography is not a niche you can just step right into. In my case, I had formal archaeology training in college and have worked with countless excavation crews. Having said that, there is sometimes a demand from nautical archaeologists to have their hard work documented through imagery.

So, before reaching out to local archaeology teams, there are a few steps you can take to increase your chances of joining an excavation. In terms of diving experience, make sure you have a lot of dives under your belt—particularly ones in difficult conditions such as deep water or low visibility. 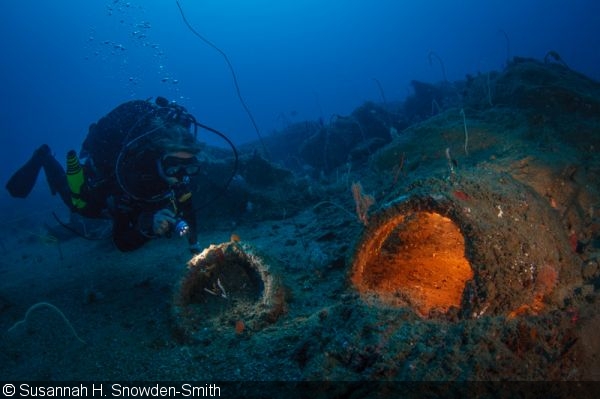 Godavaya 2nd-Century BC shipwreck excavation, Sri Lanka: An archaeologist investigates storage jars on the seabed. For this shot, I placed a slave strobe with a Triggerfish sensor inside the jar to illuminate it

Archaeology photography isn’t going to be a primary part of most underwater imagery portfolios. It’s a super-specialized type of photography that takes a lot of training and experience in order to participate in the excavations of thousand-year-old wrecks. That doesn’t mean you can’t give it a try by asking to join as a citizen scientist or buffing up your training to build a resume for some of the world’s top archaeologists looking for photo documentation. 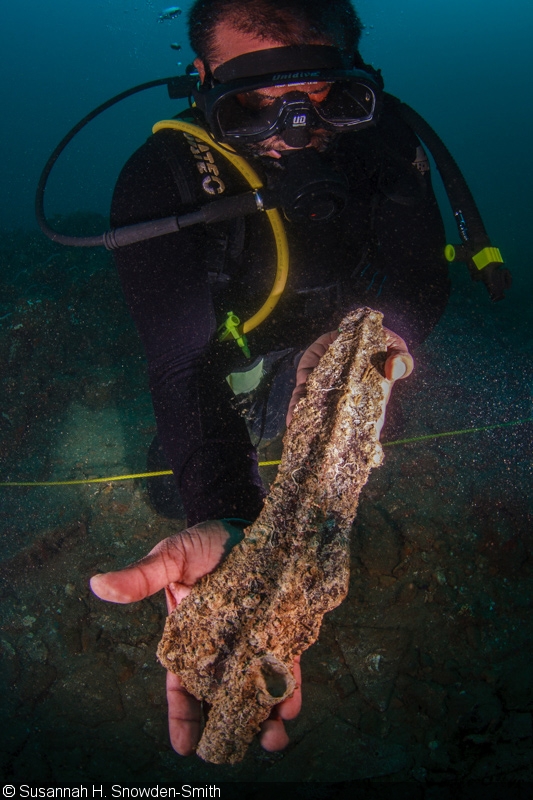 Godavaya 2nd-Century BC shipwreck excavation, Sri Lanka: An archaeologist holds an ancient spearhead excavated on the seabed. A grid line from the excavation square in which it was found can be seen running behind the artifact

About the Author: Susannah H. Snowden-Smith is an award-winning underwater photographer. She specializes in underwater archaeology photography and has photographed ancient shipwrecks—Phoenician, Roman, Bronze Age and more—all over the world. Her photograph from a 7th-Century BC excavation in Spain was just featured on the cover of the May–June issue of Archaeology magazine. Her work has been published in Science magazine, London Times, Institute of Nautical Archaeology magazine, and more. She also brings her unique eye to the underwater world to create her fine art photography. Susannah has been diving for over 25 years and is a PADI Divemaster. She makes her home base on Grand Cayman between assignments.