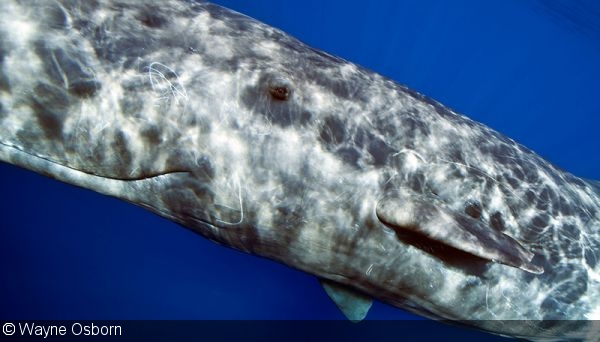 A male sperm whale (Physeter macrocephalus) glides past, Azores, Portugal. Sperm whales were hunted in the Azores until 1986

Nearly a decade ago, my wife, Pam, and I were talking to a respected whale researcher about our interest in whale photography. His response was, “Well, if you want to be useful, shoot according to our protocols.” We took his advice and eight field trips and 2,600 nautical miles later, we have photographed over 2,500 whales off the Western Australian coast for a scientific catalogue.

Getting Started in Whale Conservation Photography

Our interest in whales began when we moved to Perth, Western Australia, in 2001. I had spent most of my years in the ocean from surfing, windsurfing and scuba diving and had never seen a whale in the water. These were the times following Australia’s whaling “holocaust.” Some populations were starting to rebuild, but many of our coastal waters were still whale-free zones.

We started sailing off the Western Australian coast and encountered humpbacks on their southern migration back to the feeding grounds in Antarctica. What surprised us was their curiosity and willingness to engage with us, their former tormentors and hunters. We found ourselves being chased and then surrounded on many occasions by these sentient marine mammals. The experience was beguiling. A deep addiction to these most charismatic of mega-fauna had begun. 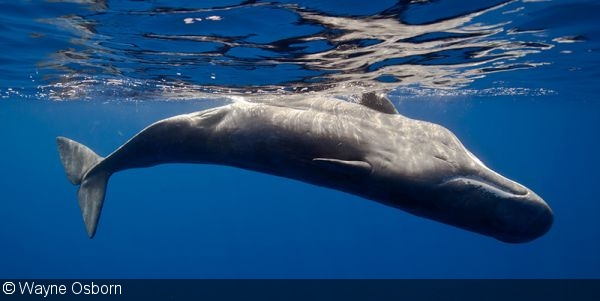 In 2005, I had my first in-water encounter with a sperm whale. I was in deep water off the island of Pico in the Azores. Out of the featureless blue, a form emerged, a giant bulbous head barrelling straight toward me. I felt the pulses of sonar in my chest as he interrogated me with rapid clicks. He glided past and the encounter was done. We have been back five times and have been privileged to witness many aspects of sperm whale behaviour, including the social and defensive marguerite formation. We have also photographed Sei, Bryde’s and Pilot whales in the water.

The Azores require a permit to enter the water, and copies of our images were provided to the environmental regulator for their research. We have also provided our images to other researchers, and one of my images of a sperm whale family has been included in the recently published The Cultural Lives of Whales and Dolphins by Hal Whitehead and Luke Rendell. 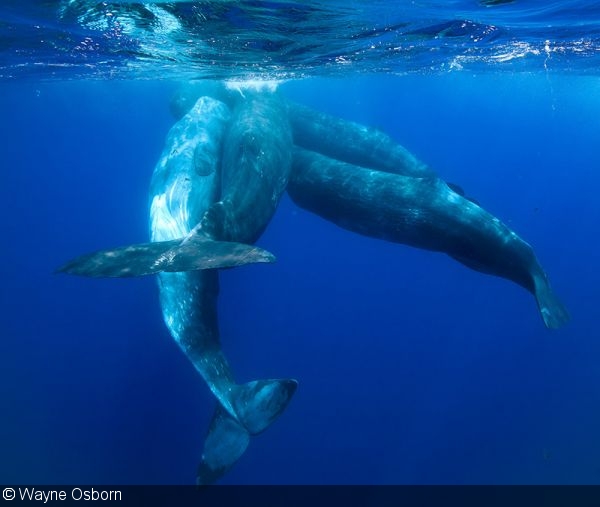 Five sperm whales in the marguerite formation, which is used for both defensive and social purposes. We have often observed this body contact—rolling together and also gentle mouthing with an open jaw

After building a portfolio of whale images and gaining a reputation for specializing in research photography, the invitations to join researchers on expeditions slowly trickled in. We have been fortunate to photograph satellite tagging of pygmy blue whales, humpback whales and dwarf minke whales. Researchers find it valuable to have images as satellite tags are deployed to check the tags have been securely applied and will function as intended.

In 2013, we were on the Ribbon Reefs, part of Australia’s Great Barrier Reef (GBR) on a world-first expedition to satellite tag dwarf minke whales. There was little knowledge of these whales and their migratory patterns. They just turn up for a few weeks each year on this part of the GBR and disappear until the following year. 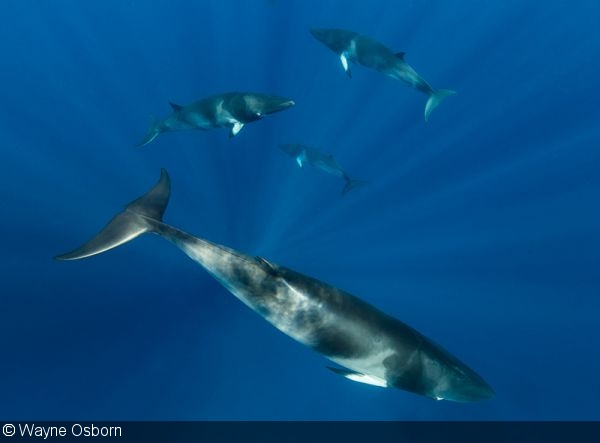 The south-easterly trade winds had kicked in, and it was fit to blow dogs off chains. Of course, the dwarf minkes were in their element and body-surfed the waves around our boat. In the water, they passed within meters of us and posed brilliantly for photographs. Four satellite tags were successfully applied and new knowledge of their migratory pattern was revealed.

As non-scientists, we find it deeply rewarding to contribute in our own small way. To try and enhance the value of our images we geo-tag them, so the location is recorded. (We synchronise our cameras with the clock on our GPS and run a track program, and then use Photolinker to load the coordinates into our images.) We note and record behaviour and numbers in each pod where we can and include this in a spreadsheet as part of a data pack with the images. 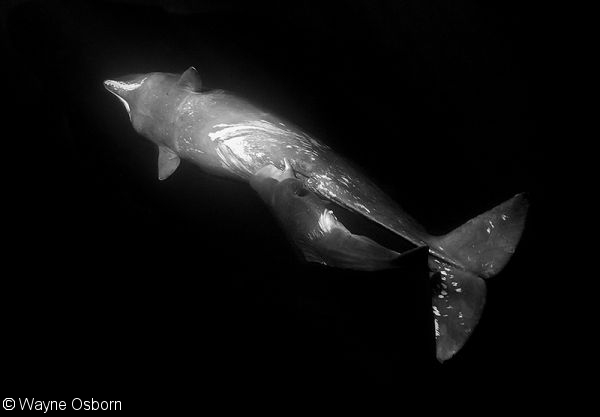 A newborn spern whale calf lays its head against mother’s belly and extends its jaw to suckle. The mammary slits are either side of the genital slit

The rapid development of digital camera technology and wide availability of equipment has really opened up a new realm of opportunity for citizen science. The work we do with humpbacks (sometimes 2,000 or more images per day) would have been prohibitively expensive in the days of film. Advances in image processing now make it possible to produce a level of detail undreamed of not so long ago.

Our underwater rigs are Nauticam and Nexus housings. The Canon EOS 5D Mk III, and 5D Mk II before it, have served us well. For large mammals underwater, Zen’s DP230 superdome and Canon’s 16–35mm lens give sharp results in most conditions. The flexibility of a wide-angle zoom allows us to make the most of what may only be fleeting encounters. A straight-through viewfinder rather than a 45-degree one is much easier if working at or close to the surface.

For above water, our workhorse rig is a Canon EOS 1D Mk IV and a 100–400mm lens. This can be readily hand held in small boats and has delivered great results. A fast frame rate is critical to capture breaching action and the 1D Mk IV’s 10 fps continuous shooting is a real advantage. We find that a 1/1600s shutter speed is enough to stop the action. Given Pam’s faster reaction times, this is mostly her beast to use, and I drive the boat. 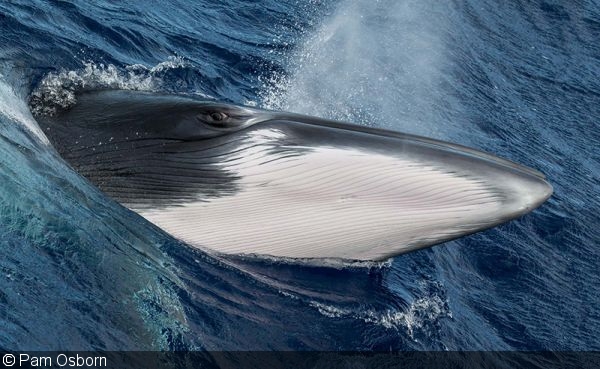 So how do you capture images of value to researchers? It really varies between species. For humpback whales, it is mostly above-water shots that are used for individual whale identification—a square-on shot of the underside of the flukes, plus each side of the whale, including the dorsal fin (known as right and left laterals). If the whale also breaches, an underbody shot will reveal its sex. Yes, whale sexing comes with the territory.

We often convert these images to black and white, as the body patterns appear more distinct in monochrome. This is important for identification when the researchers add the images to the catalogue. While the flukes have the most distinctive “tell” of a whale’s identification, many whales are inconsiderate and will not fluke on command! The distinctive dorsal fin shape and body patterns allow many more whales to be individually indentified than if flukes were the only identifier.

In contrast, southern right whales are identified from callosity patterns on their heads. Callosities are roughened patches of skin and the pattern is present from birth. We have photographed several southern rights (with calves) in tropical waters, which have originally been seen in the Southern Ocean thousands of miles away. For other whale species, any body markings and scars are clues to identification. Good quality images, which can be enlarged, are the key to being “useful.” 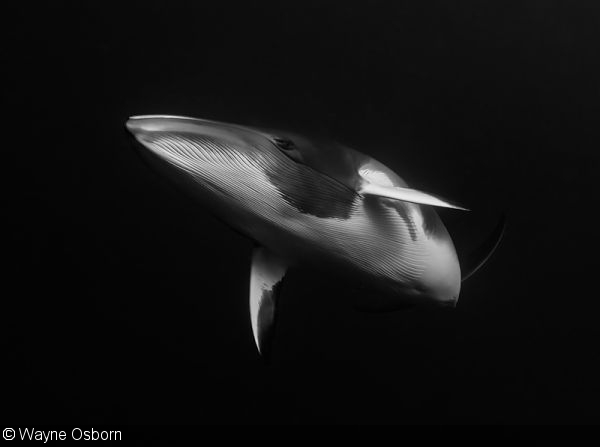 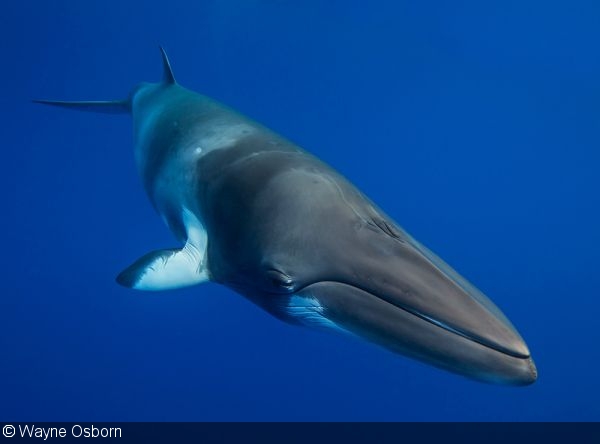 For a few weeks every year, dwarf minke whales turn up at Ribbon Reefs, part of Australia’s Great Barrier Reef, before disappearing again until the following year

One thing to bear in mind is the rules that apply to whale encounters. These can be different for each country and region and can carry heavy penalties if you breach them. Researchers often work under specific permits that allow them closer access than the general public. Sometimes the whales can only be photographed at a distance, and for that reason, telephoto lenses are a must.

So yes, art can become science. The pleasure of creating images from the natural world can also be useful. One irony is that often the most (photographically) boring images have more scientific value than the spectacular ones. That spectacular breach of a humpback whale calf totally clear of the water is really only valuable in the sense that you can tell whether it’s a boy or a girl.

On the other hand, recording behaviour can be valuable. On one occasion in the Azores, a young male sperm whale brought a large squid to the surface. As luck has it, it was nearly dusk and the in-water images would never be competition quality. However, they were good enough for scientists to get a possible identification of the squid species. 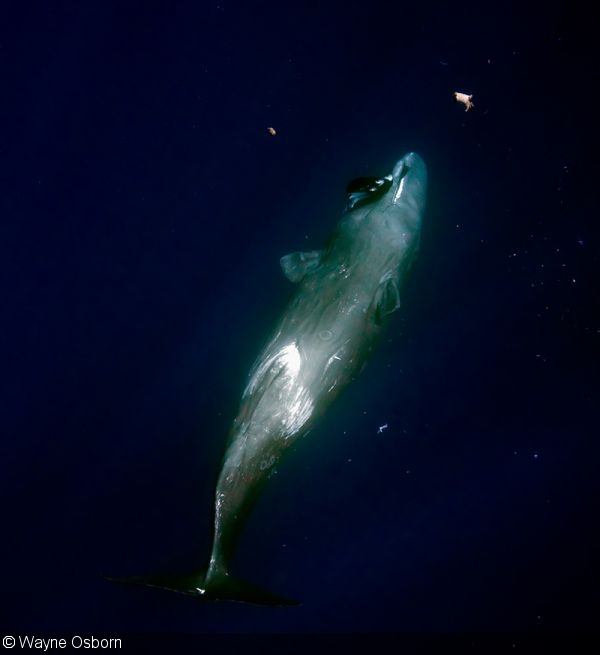 A young male sperm whale comes to the surface with a squid in his mouth and then proceeds to eat it. Researchers could identify the squid as probably belonging to the species Tanginia danae

So where are the opportunities? Scan the Web. Talk to local research agencies or universities. See if your work can be scientifically useful as well as creative. Shoot in RAW (if you can) and work on getting the best image quality possible, as detail can be reveal hidden secrets. 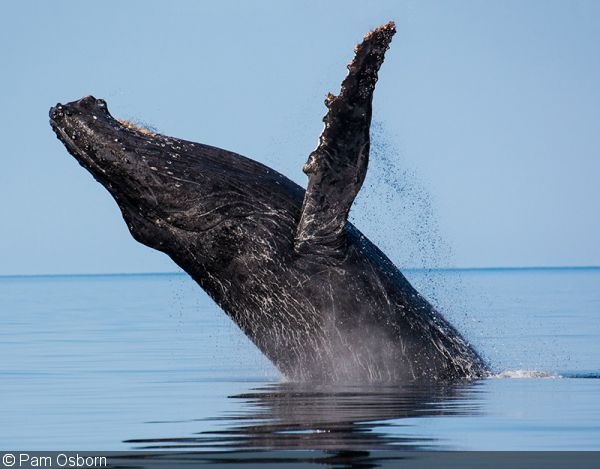 A humpback whale (Megaptera novaeangliae) breaches on the glassy smooth surface of Western Australia’s Exmouth Gulf, a crucial resting ground particularly for mothers and newborn calves. This whale was part of the austral winter migration and heading south to feeding grounds in Antarctic waters. Humpback numbers in this population have recovered from several hundreds in the 1960s to over 30,000 today

More of Pam and Wayne’s work can be seen on their website, www.wayneosborn.com.au.