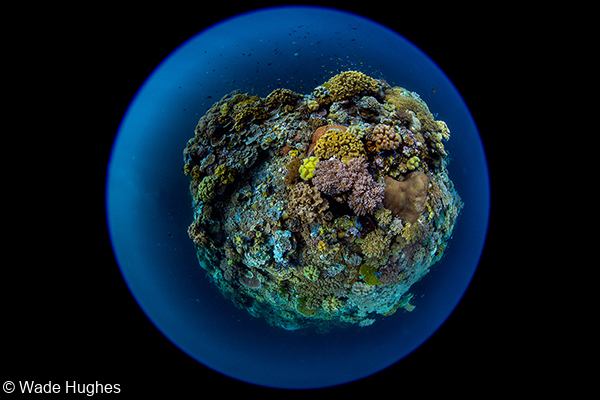 Planet Reef: Healthy corals flourish on the peak of a seamount at the Blade dive site

Remote and idyllic for overseas visitors, the islands off the coast of Sulawesi offer limited employment and business opportunities for local communities. But collaboration between 18 of those local communities and Wakatobi Resort has led to the sustained rehabilitation and conservation of the coral reefs around the islands. So successful has this collaboration been that it gave rise to the creation by the Indonesian government of Wakatobi National Park. As a consequence, there are more economic choices emerging, and the world has been presented with a viable model for the long-term sustainable management of globally important coral reefs.

But the coronavirus pandemic, by curtailing travel, is currently robbing the national park of the steady flow of foreign visitors and the revenues they bring. With the mounting economic pressures associated with housing, clothing, feeding, and educating their families, local communities are facing increasingly difficult times. Inevitably, this has the potential to result in increased exploitative pressure on their available natural resources—particularly the coral reefs. Although, on one hand, this can be seen as yet another local issue, forced on the area by COVID-19, it is far more than that. A new book, Wakatobi: Conservation. In Depth, written, designed, and illustrated by Wade and Robyn Hughes during nine visits to Wakatobi so far, vividly reveals what’s at stake. In the following, we present some excerpts from the book: 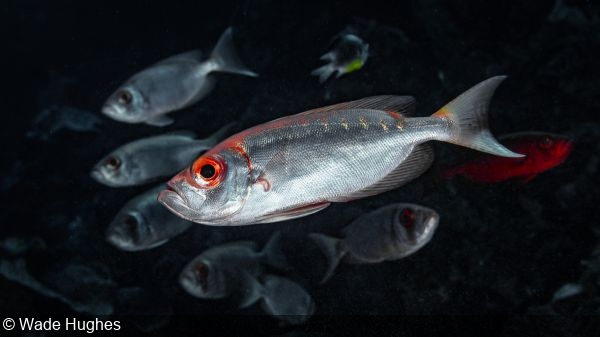 Bigeyes, watching—one more curious than the others

The more we’ve seen at Wakatobi National Park, the more we’ve got to know just how effectively the resort and the local communities are collaborating to ensure that the reefs are sustainably managed and are therefore given the best possible chance of thriving into the future. Indeed, it is this visionary collaboration that has led to the designation of the area as a national park by the Indonesian government.

To fully grasp the significance of this, it is worth reflecting a little that coral reefs play a role in maintaining the well-being of the world’s seas, on which humans increasingly depend for food, and on the health of the atmosphere, upon which all life depends for oxygen. 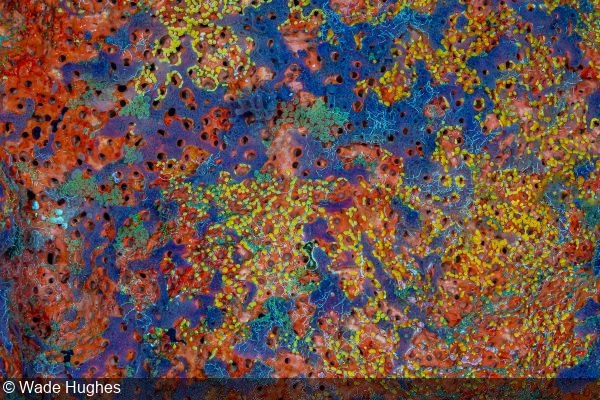 Sponges and ascidians combine in riotous color while the photographer waits for something, anything to swim into the foreground 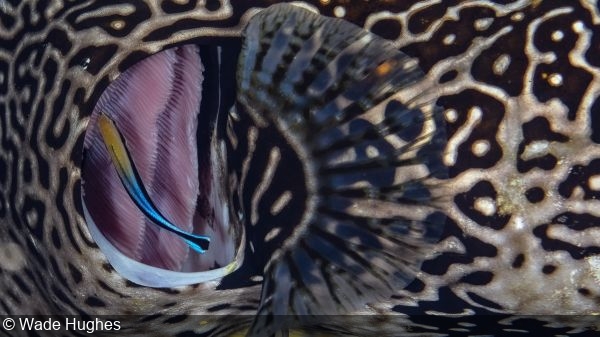 Delicate operation: A bluestreak cleaner wrasse looks for food while a map pufferfish opens its gills in the hope of relief from any parasites the wrasse might find

In some yet to be updated data, the United Nations Environment Program (UNEP) estimates that coral reefs account for just 0.1 per cent of the total area of Earth’s oceans, yet they produce and harbour around 25 percent of all marine species.

These reefs occur in more than 100 countries, with about 80 of those countries to be found in the developing world. UNEP estimated that healthy coral reefs can generate value of around US$1.25 million per hectare per year from the products and natural services they provide. They yield fish and other marine life for human consumption, coastal protection against erosion by the sea, increasingly they are becoming the source of tested and proven drugs and medicines that can not yet be found nor synthesised from terrestrial organisms.

And they attract and support a ballooning tourism industry. 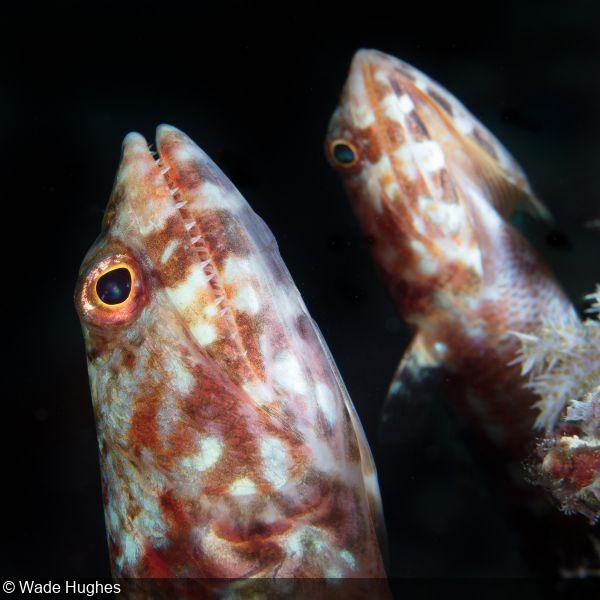 Close relationships: These lizardfish were inseparable as they hunted their way along the reef 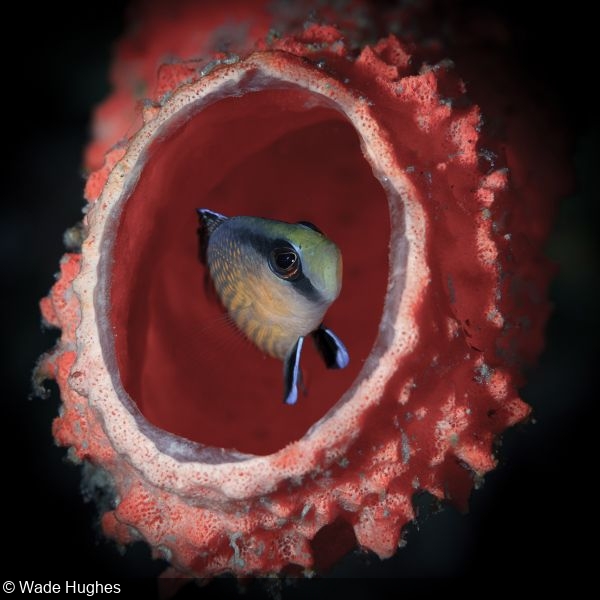 A dottyback finds refuge in the splendor of a tubular sponge

Somewhere between 850 million and a billion people live within 100 kilometres of these reefs and of those probably somewhere north of 275 million depend directly on those reefs for their livelihood. Add tourists to those numbers and it’s easy to see that the economic value of those coral reefs, fragile and vulnerable as they are, is under immense pressure. And so, how best to protect them? Humanity, in general depends and benefits from them, and yet most of the people living in closest proximity to them, are amongst the world’s poorest and least able to defend and sustain them.

The key lies in the economics. Wakatobi National Park survives and thrives today because it provides economic alternatives to the 18 or so local communities that are collaborating with the Wakatobi Resort. They can choose between unmanaged and destructive exploitation of their reefs or sustainable management of them. They benefit directly from revenues generated by the resort through the provision of reef lease payments, electricity, and educational support. 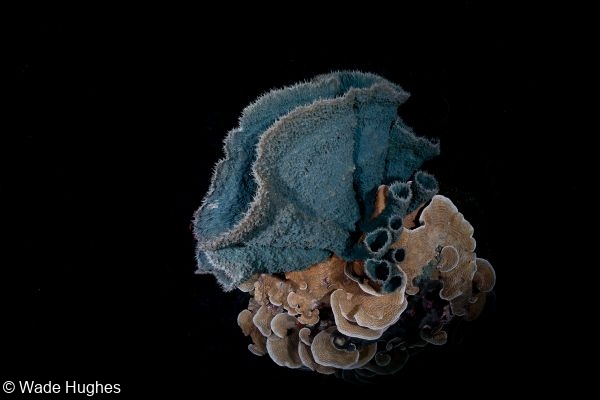 Spotlit by strobes in the night, and crowned by a colony of sponges, a vertical column of coral stands, 40 feet below the surface at The Zoo dive site 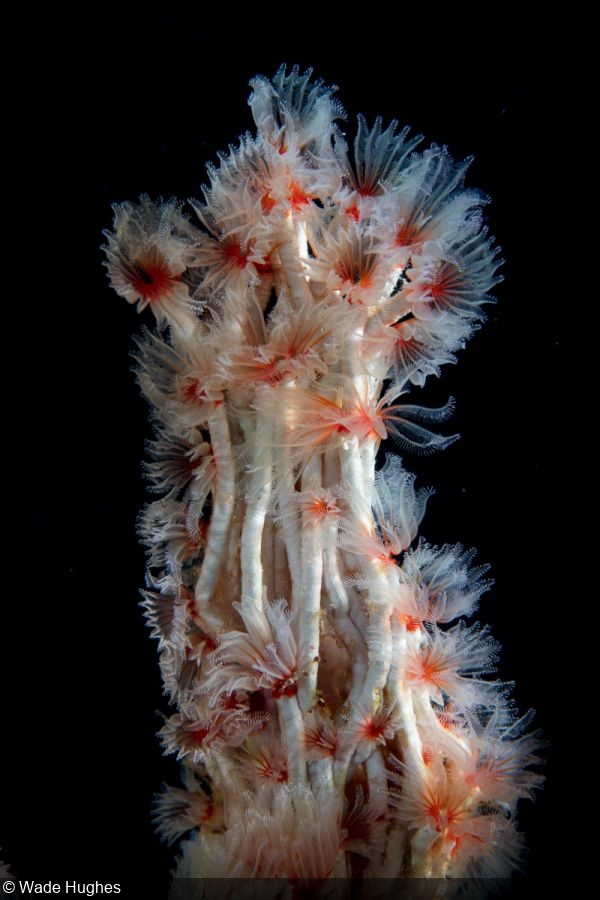 Local people are employed and trained in a wide range of vocations at the resort. Local fishermen have a reliable customer willing to pay premium prices for high-quality, sustainably-harvested fish. No-take areas are generally recognised and respected by those local fishermen, who understand these areas’ roles in replenishing the reefs. Local villagers patrol the reefs to encourage observance of those no-take areas.

This is conservation based on sound economics. Economic growth of the resort, through its appeal to wider ranges of guests, translates as more opportunity and choice for more local people. In turn, that translates into higher levels of protection for the core assets—the reefs themselves. 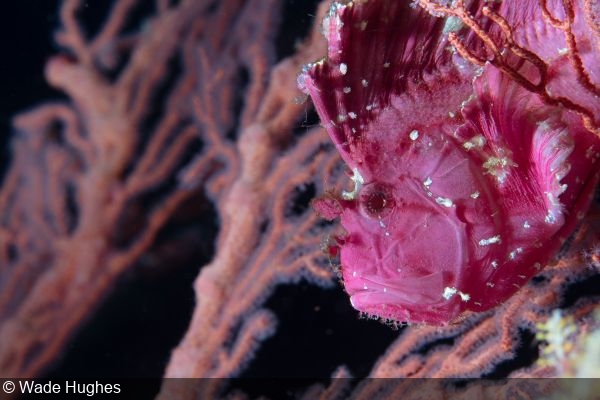 What advantage bright pink coloration brings to an ambush hunter like this leaf scorpionfish is anyone’s guess. But it must work: This fish had been hiding in plain sight on a large sea fan at the Starship dive site for over a year when this image was made 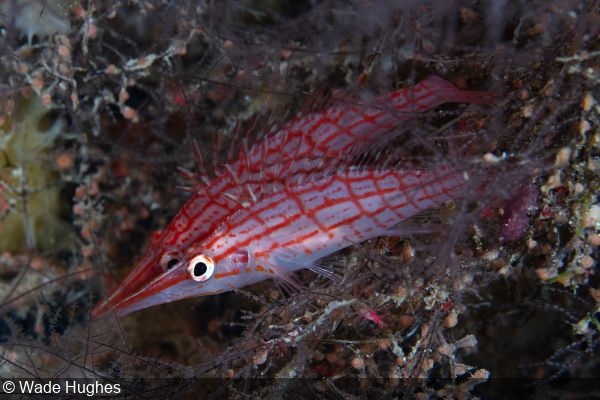 Longnose hawkfish feeding on small crustacea and also happily snapping up pygmy seahorses appear to be displaying affinity for each other. Their striking patterns, each as unique as a human fingerprint, provide camouflage and also likely help them distinguish each other when they are separated

Wakatobi’s reefs have been fished and exploited for centuries, so they are not pristine. I doubt that there are now any coral reefs anywhere in the world that are pristine—that is unaffected by human activity. However, thanks to the collaboration between the local communities and the resort, Wakatobi’s reefs are spectacular and have recovered to the point that they have earned their national park status. And that’s their great attraction for visiting divers, all of whom have to play their own part in protecting these exceptionally valuable reefs.

No-touch, no-take, no-break is the expectation set by the resort’s guides, and led by example by them. There are no shrimp being squeezed out of their ascidian havens, no baby frogfish, pygmy seahorses, or nudibranchs popping out of plastic bottles, and no shifting of intruding hydroids or rocks to ensure trophy photographs for bucket-list visitors. In many ways, this is still a sea of Eden, and it demands that level of respect. 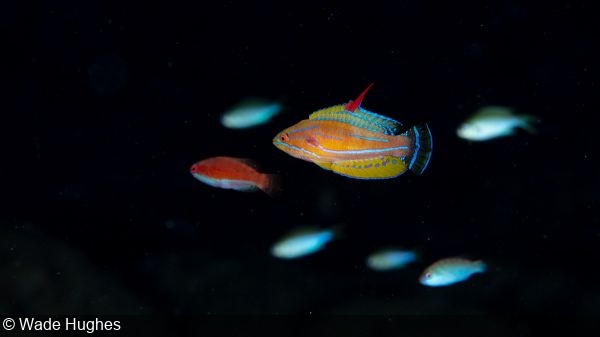 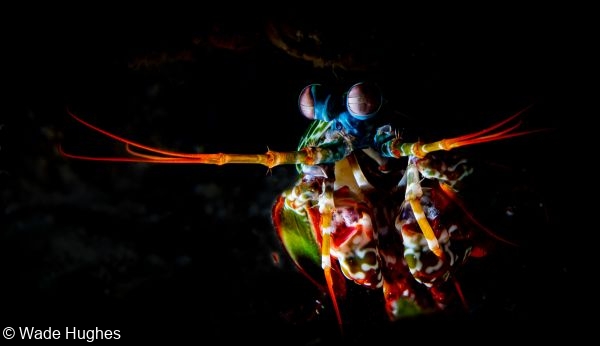 Peacock mantis shrimp can deliver lethal punches with claws adapted to act like clubs. Striking with the speed of a .22 calibre bullet, they generate massive pressure waves that can demolish the armor of crabs and the shells of molluscs. Rumor has it that, sensing threats from their own reflection, they’ve also been known to take out a dome port or two!

Beauty alone, though, will never sustainably conserve our planet’s natural assets. We live in a world where the lottery of birth means that some people have to scavenge reef-tops at low tide for food, while others are able to earn the means to dive the reefs on holidays, with camera systems worth more than a local house. It’s too easy for those of us who are more fortunate to lament destructive exploitation when we see it. It’s an issue, worldwide, that is well documented. Pointing it out and calling for action from the comfort of a well-serviced home or office, removed from the realities of life on the ground, doesn’t help.

What does help is putting a shoulder to the wheel, and tackling local problems with local resources for local benefit. Wakatobi National Park is an exemplar of that effort. Diving the reefs there brings with it the satisfaction that our hard-earned income has yielded not only pleasure and relaxation for us, but also, in some small way, helped support the local communities and their visionary conservation program. That’s why we keep going back. 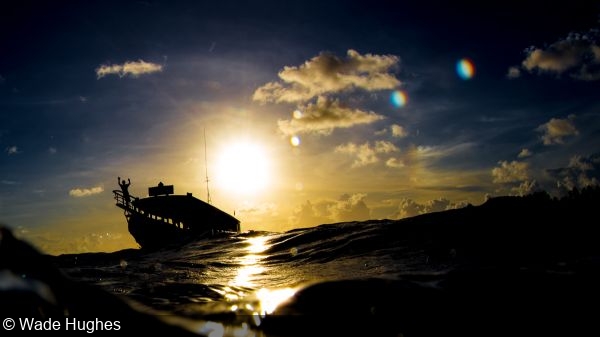 Day’s end, and Wakatobi III takes Wade and Robyn home to the resort 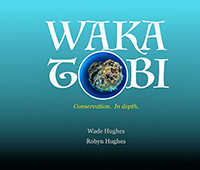 Authors’ Note: We produced “Wakatobi: Conservation. In Depth” to help shine some light on the economic, social, and environmental value of Indonesia’s Wakatobi National Park at local and global levels. It seems to us that appealing from a distance for conservation based on the aesthetic value alone of reefs, forests, lakes, mountains—you name it—will never be enough to assure their long-term future when there are local people heavily dependent for their livelihood on those same natural resources.

The path to sustainable conservation, as the Wakatobi model demonstrates, lies in creating economic and social choices that enable local people to weigh the most advantageous means of managing the natural resources on which they depend. Diving at the five-star Wakatobi Resort brings more than just short-term enjoyment for visitors. It makes a significant contribution to the well-being of local communities, and helps ensure the long-term sustainable management of the globally important coral reefs within the park’s boundaries.

The book reveals the vision of the local communities and illustrates the success of their approach with more than 200 pages of our best images, printed on superb satin-gloss paper. We decided to self-publish and print on-demand so that we could have full control over the design and content, and avoid the sometimes years-long process of looking for a traditional publisher who would be willing to give the Wakatobi story the treatment it deserves. It can be previewed and read online.