DPG would like to thank Backscatter and Isotta for providing the Olympus TG-5 camera, Isotta TG-5 housing, Backscatter M52 wet lens, and various accessories used in this article. Cayman Turtle Divers was instrumental in helping the photographer get the best imaging opportunities. 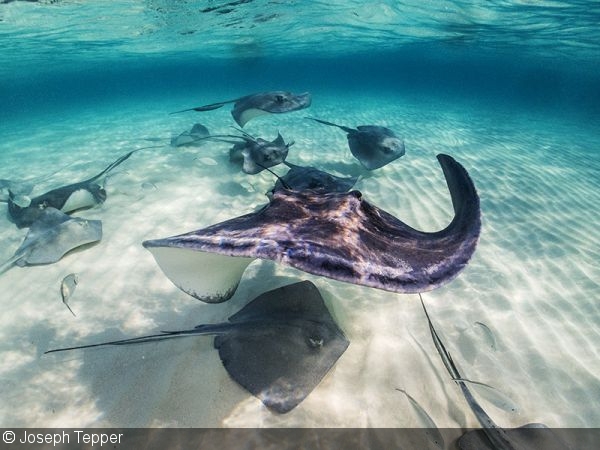 It would be hard to come up with two more disparate wide-angle underwater shooting situations than photographing the resident rays of Grand Cayman’s famed Stingray City and fending off swarms of blue sharks in coastal Rhode Island. The former is swarmed with cruise ship passengers taking selfies with a GoPro in one hand and a rum punch in the other. In Rhode Island, professional wildlife photographers wield several-thousand-dollar setups as cameras and default shark shields.

After putting the Olympus TG-5's tough moniker to the test photographing sharks in Rhode Island, I decided to hop on a flight and fully vet the camera's wide-angle capabilities in the laid-back diving off Grand Cayman. Often associated with macro underwater photography because of its well-known Microscope Mode, this already “rugged” camera was transformed into a little red wide-angle powerhouse by kitting it out with the Isotta TG-5 housing and Backscatter’s M52 Wide-Angle Wet Lens. When the going gets tough, the tough get going (diving, that is). 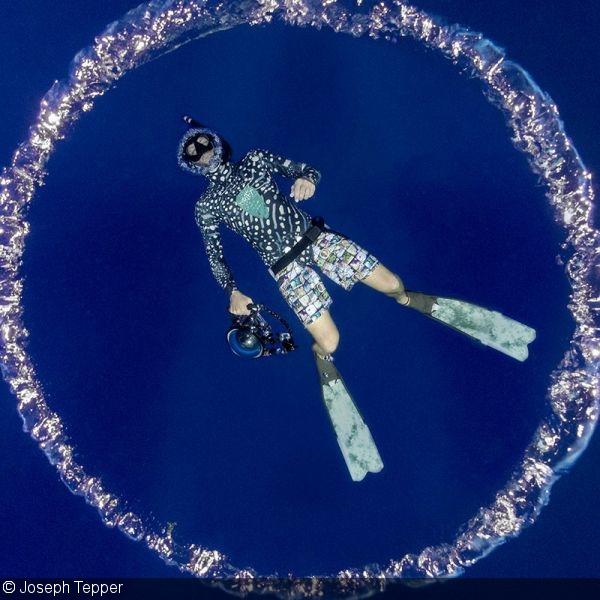 The Olympus TG-5 for Underwater Photography—More than Macro

The TG-5 is much of what you’d expect in the $300–500 rugged camera price point—and then some. A few iterations ago, Olympus added the option to shoot RAW in the Tough series: This image format is much more critical for wide-angle shooting where you’ll want as much malleability as possible to edit highlights/shadows and white balance. The 1/2.3” BSI-CMOS sensor produces 12-megapixel RAW stills. And thanks to the TruePic VIII Processor you can shoot up to 20 frames per second in burst shooting mode, which was tremendously helpful shooting in the shallow natural-light conditions of Stingray City.

If you’re reading this article, then you will likely be purchasing a dedicated underwater housing for your TG-5, but the camera’s out-of-the-box durability is a major plus. The camera is waterproof to 50 feet (15m), shockproof from above head-height, and crushproof up to 220 lbs. What all that means is you shouldn’t be afraid to take it out of the housing even on a boat or throw it in the bottom of your backpack for capturing quick topside snaps. 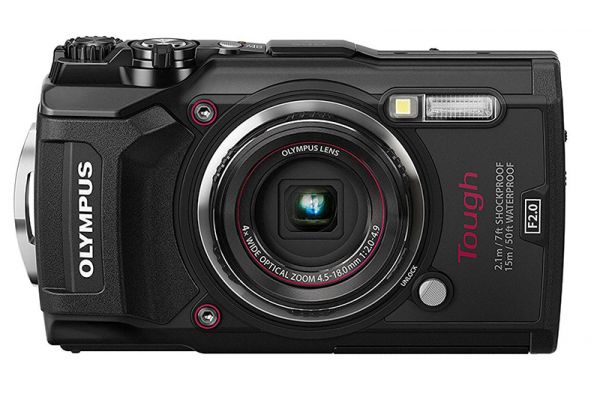 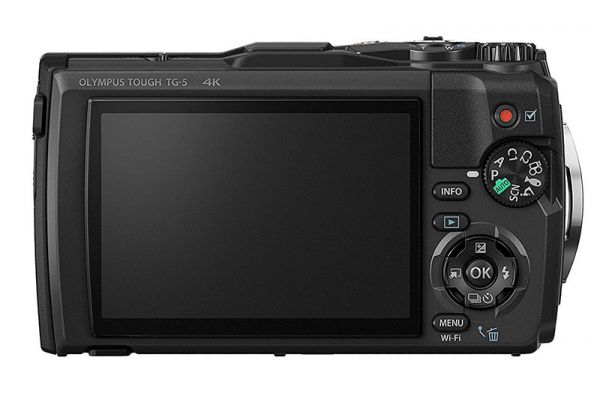 Key Features (Compared with the TG-4) 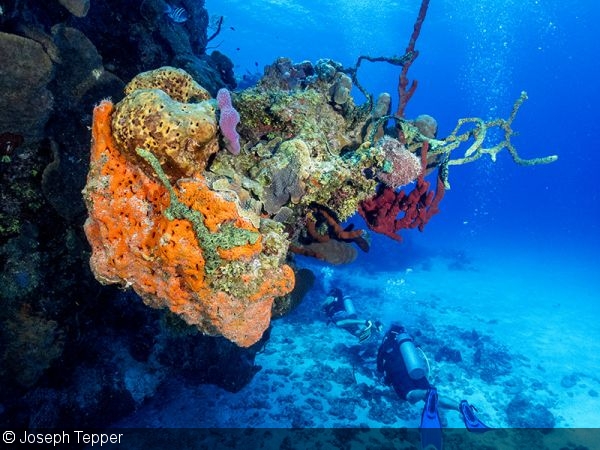 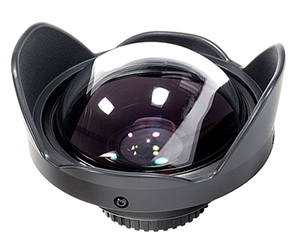 Of all the things to love about the TG-5, its built-in 25–100mm (equivalent) lens isn’t one of them if you’re planning on some wide-angle photography. The lens is versatile enough for capturing images above water, but we underwater shooters need a much wider angle of view to get close to subjects so that our strobes are effective in adding light and bringing out all of the wonderful colors of the ocean.

Backscatter has designed and produced the M52 Wide-Angle Wet Lens specifically for the TG series of cameras. The lens promises no vignetting even when the focal length of the built-in lens is set at its widest, and the optics are optimized to produce the sharpest corners possible with the TG-5. 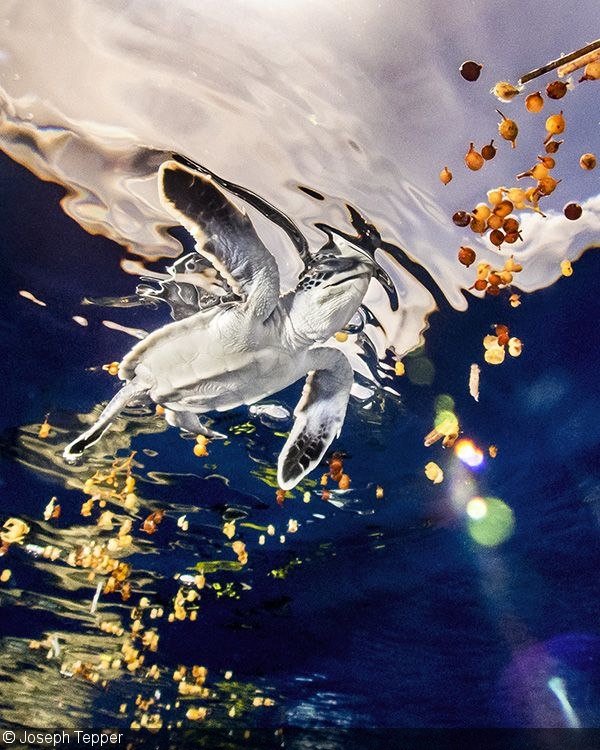 Designed specifically for the TG-5, Backscatter’s M52 wide-angle wet lens allows you to shoot anything from reef scenes to close-focus wide-angle images—like this one of a baby turtle

The 120-degree field of view at the widest focal length is expansive enough to adequately light and frame large subjects like wrecks and reef scenes. While you won’t be able to fit in a 10-foot section of reef in the frame as you might with a DSLR and fisheye, subjects up to six feet wide are very doable. At the same time, combining a bit of zoom with the wet lens mimicked the role of a rectilinear or fisheye wide-angle zoom lens on a DSLR for better filling the frame with shy, distant subjects like eagle rays and barracudas.

A lot of wet lenses these days feature spectacular optics, but they can also weigh as much or more than the entire camera system! Backscatter’s lens is actually quite compact and lightweight. You won’t need a buoyancy collar just to keep the thing from sinking. It’s small enough to fit in your BCD pocket if you want to take a break from wide-angle and play around with the TG-5’s Microscope Mode. 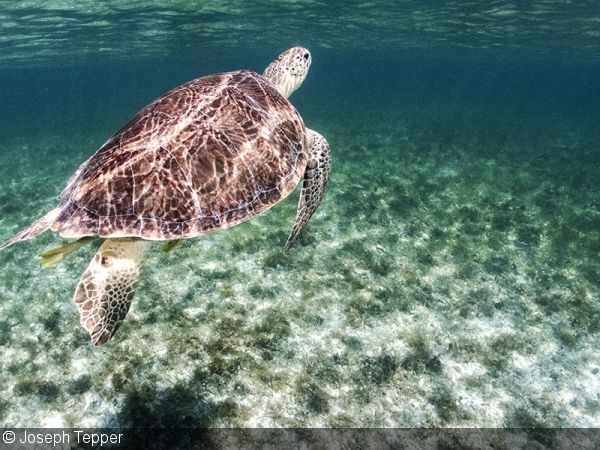 Think the Olympus TG-5 is just for macro? Think again!

The TG-5 might be tough in its own right, but since we wanted to produce some epic shark images and stingray selfies going all out with the Isotta TG-5 housing seemed like the obvious call.

I get asked a lot why one housing for a camera might be better than another. Aren’t all housings just doing the same thing? Well, yes. And no. Sure, the main quality we want is a housing that keeps water out. A nice control layout is probably the close second preference—especially for more advanced shooters who will constantly be tinkering with settings. Isotta’s TG-5 housing checks both of these boxes. 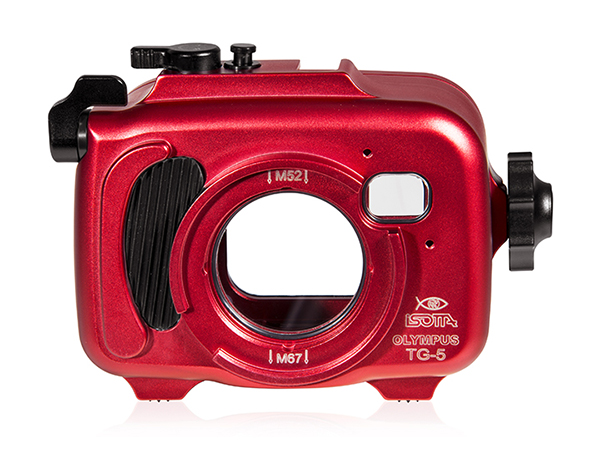 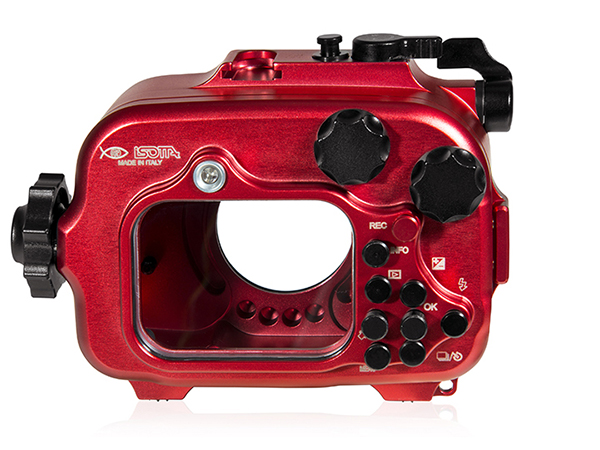 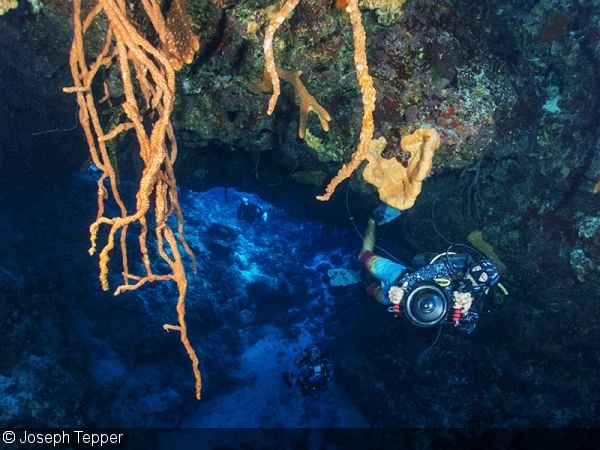 Shooting with the TG-5 inside the Isotta housing mimics the feel of a DSLR, but at half the size

But it’s really the attention to detail that raises a housing to another level. I’ve tested so many compact camera systems on trays where you cannot reach the shutter from the handles and end up gripping the camera housing itself. The optional add-on shutter extender gives this compact system the ergonomics of a full-fledged DSLR. Unique to the Isotta housing is a dual M67/M52 thread mount—so you won’t need an additional step-up or step-down ring for alternate wet lenses. The laser-engraved controls make it easier to quickly adjust to the new housing and will endure until it’s time to upgrade to a TG-10. I also appreciated the rubber grips on the bottom of the housing for securing the setup on slippery surfaces.

My personal favorite feature of the housing is Isotta’s signature one-handed open/close. The tough specs of the TG-5 make it a camera you will want to take in and out of the housing frequently for various above-water uses. The simplicity of the turn screw makes for a quick maneuver while still providing enough tactile feedback to give the feeling of a secure closure. 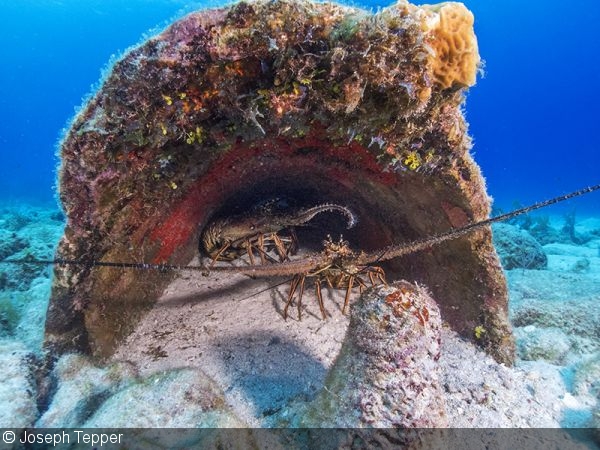 A pair of spiny lobsters hides inside of a tube at the “Macabuca” dive site, Grand Cayman 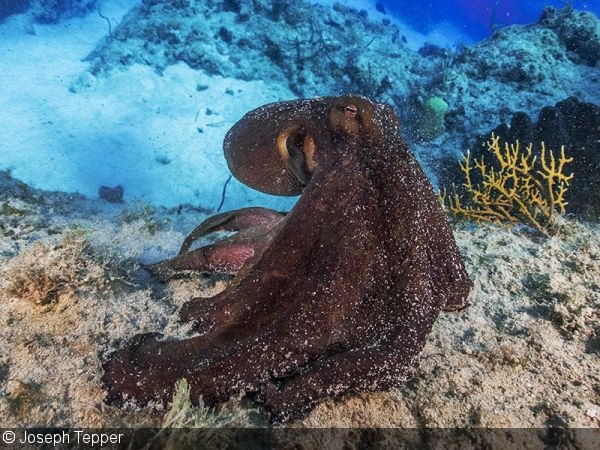 Getting Great Wide-Angle Underwater Photos with the TG-5

The TG-5 camera has proven to be such a force in the underwater imaging world because it appeals to almost all levels of photographers. An entry-level diver or snorkeler might just use the camera on its own in one of the underwater modes, which are actually quite adept at producing well-exposed, non-washed-out images in the shallows. And then there’s the editor of DPG, who has the camera tricked out with top-of-the-line accessories and is pushing the camera’s creative control to its limit.

Unfortunately, one of the downsides to the TG-5 is the lack of complete manual exposure control. However, for wide-angle underwater photography, the ability to shoot in Aperture Priority is sufficient—and will be the go-to choice for most shooters. 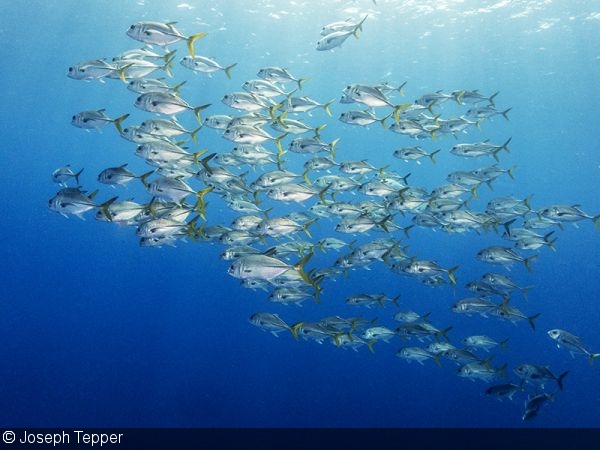 Setting the TG-5 to Aperture Priority allows some creative control over the exposure, while also allowing the camera to do some of the work

To produce the sharpest corners, I kept the aperture set to f/8. (Note that the camera only offers a limited set of aperture values, which are variable depending on focal length.) The camera would then meter the scene and adjust the shutter speed accordingly. I find that most compact cameras tend to want to overexpose the image, so I suggest setting exposure compensation anywhere from –2/3 to –1.5 stops. To achieve crisp light rays near the surface when photographing baby turtles, I even set the EV to –2 full stops and let almost all of the light in the image come from either the bright sun or my strobes.

Testing out the camera in low-light conditions (under ledges and inside wrecks), I found the camera automatically reduced the shutter to 1/60s—producing unwanted motion blur. I decided to increase the ISO sensitivity so that the shutter speeds could sit in above the 1/125s range. The ISO performance on the TG-5 is decent for an action camera, though as someone who is used to shooting with high-end compacts through DSLRs, I was slightly disappointed to find ISOs above 800 borderline unusable in terms of image noise. 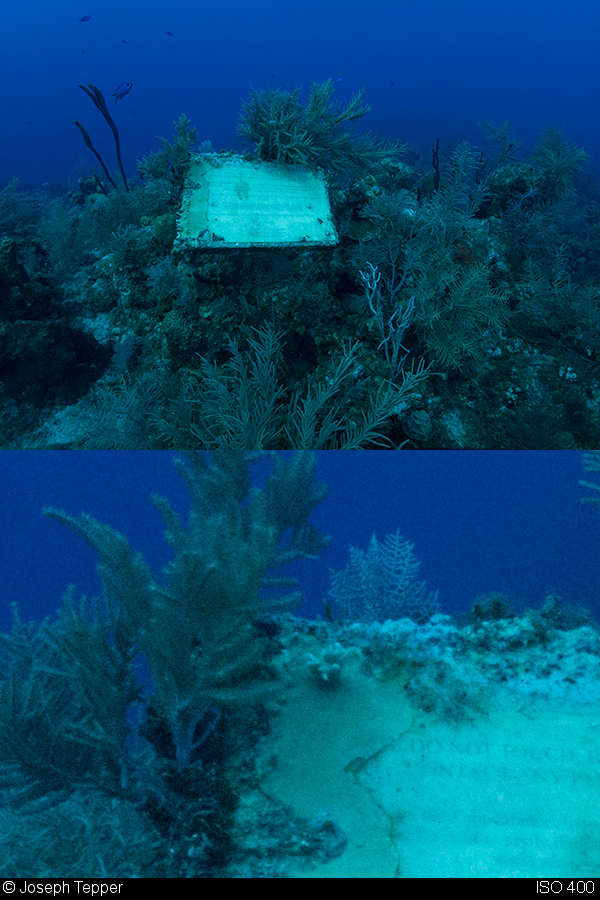 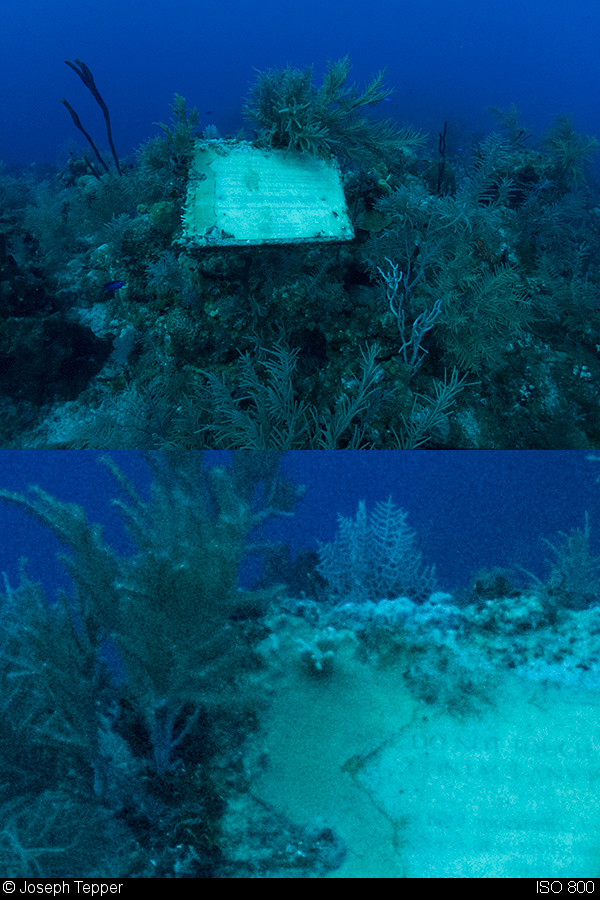 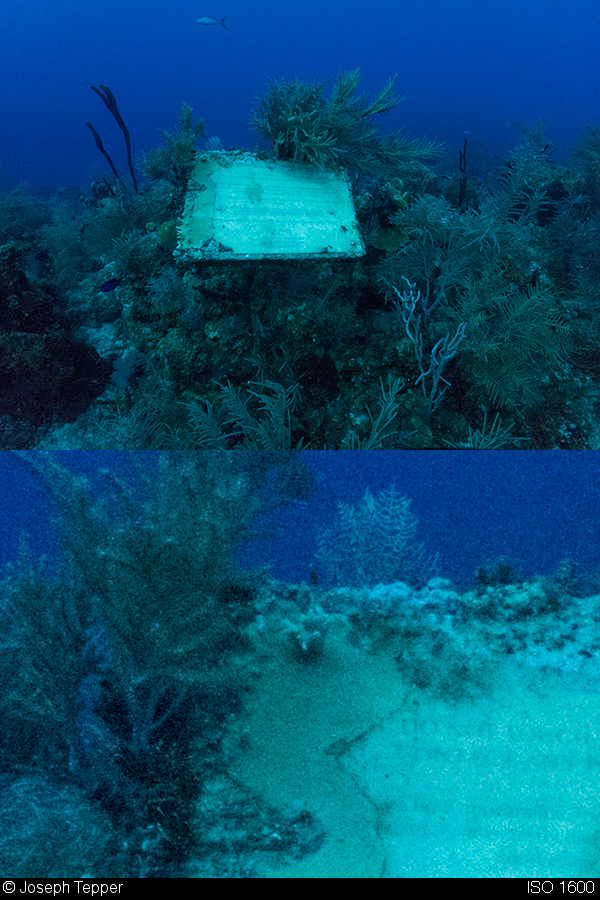 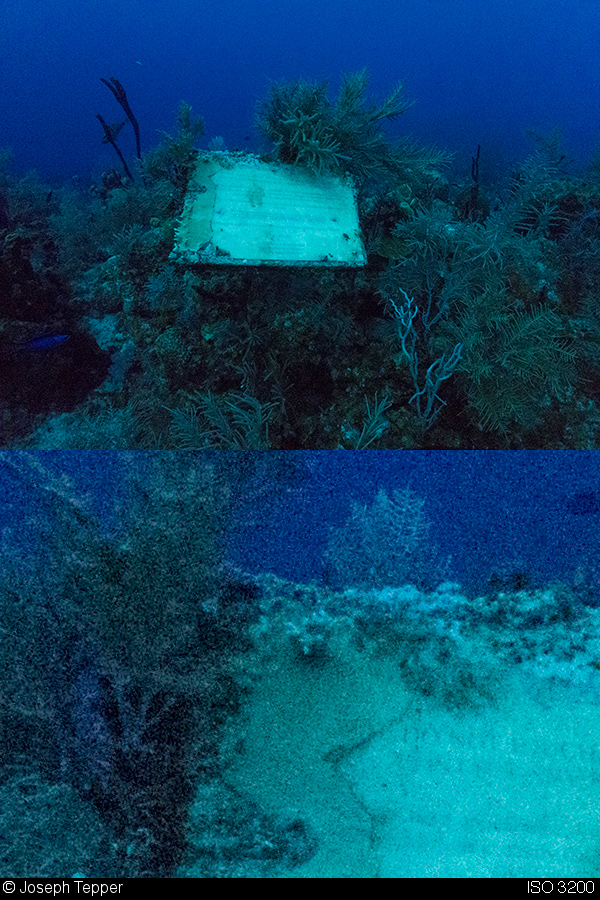 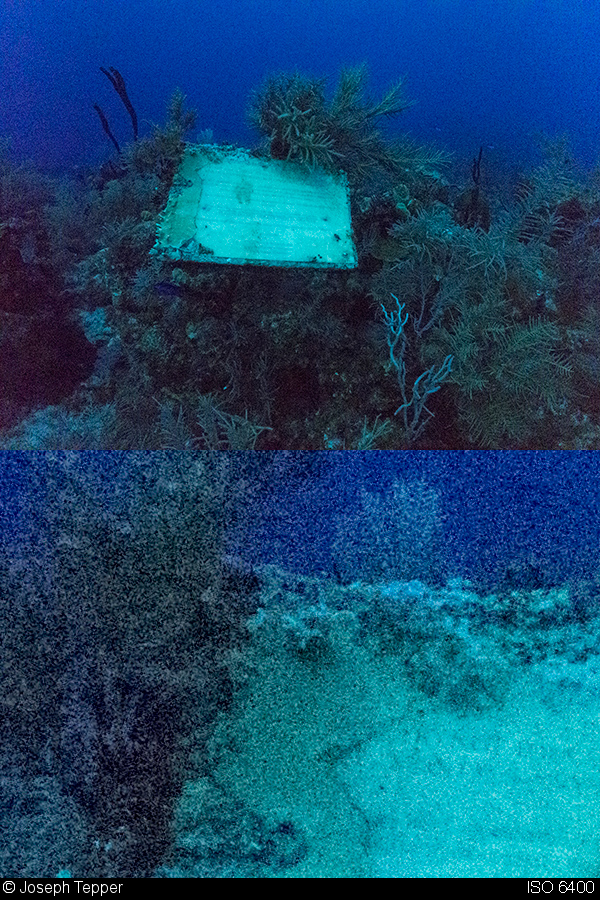 Even at ISO 400, you can start to perceive some digital noise when viewing images at 100% (lower half), and by ISO 1600, the noise is noticeable even at web resolutions (upper half)

In the idyllic waters of Cayman, however, you have to search for conditions that might push the limits of the TG-5. However, I had the chance to use the TG-5 in a diverse array of situations: exploring the inside of wrecks, diving through massive underwater tunnels, playing with stingrays, and even photographing baby green turtle hatchlings swimming in sargassum.

The autofocus on the TG-5 was a real standout in these extremely different situations. Inside the wreck of the Doc Poulson, there was little-to-no available light and the camera locked on to features in the dark. I shot from the hip at Stingray City—meaning that I was just holding the camera below the surface and not looking at the LCD screen—and had confidence that the TG-5 would nail focus the vast majority of the time.

The tiny, two-inch baby turtles truly pushed the limits of the camera’s autofocus, but by selecting single point AF and freediving below the subjects to pinpoint the subject in the frame, I was able to get a few tack-sharp pictures—even when the turtles were almost literally riding on top of the Backscatter M52 wet lens. 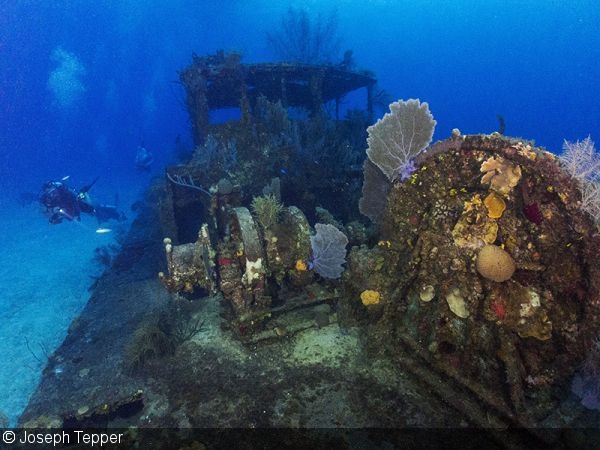 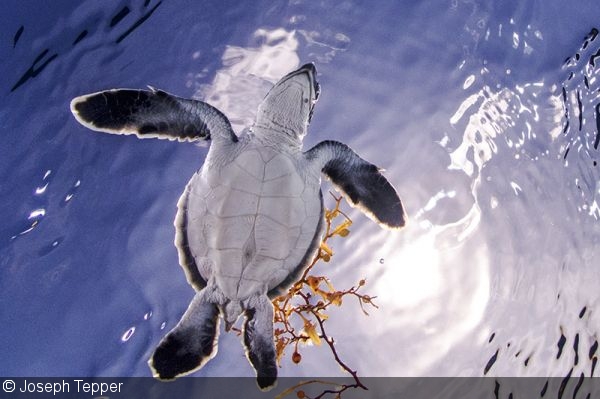 Is there a better stamp of approval for a camera system than when the reviewer decides to purchase it? Probably not. After testing the TG-5 out for several weeks, I decided to make the setup my own. Sure, I wish it had full manual exposure and integrated white balance in movie mode, but I’m willing to overlook these shortcomings for a built-tough secondary setup to my DSLR that can handle swarms of sharks as well as stingray selfies. 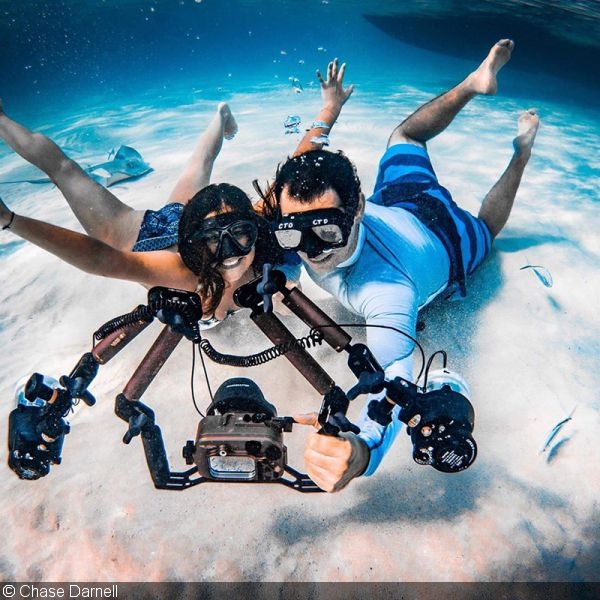