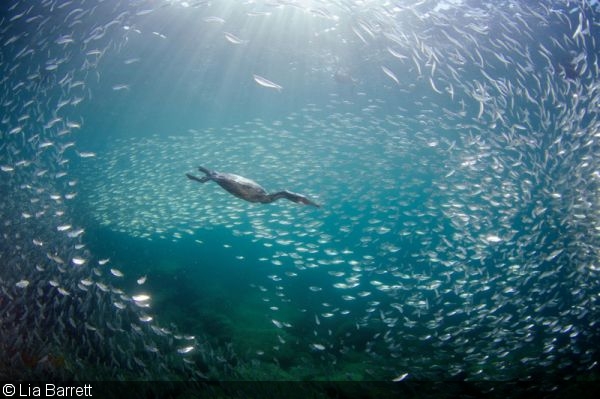 The first time I saw a photo of a cormorant chasing sardines at a depth of 100 feet, my immediate reaction was not, “How did it get to 100 feet?” Rather, it was, “How does it see what it’s chasing?” After all, it had been floating at the surface, noticed something in the water, dove in, and then chased it. Humans can’t instantly switch vision from air mode to water mode—we reach for a mask. How do cormorants do it? The broader question is, “How do air-breathing diving vertebrates do it?” We’ll look at three examples—penguins, cormorants, and sea gypsies.

First, have a look at Figure 1, which shows a schematic of the human eye. 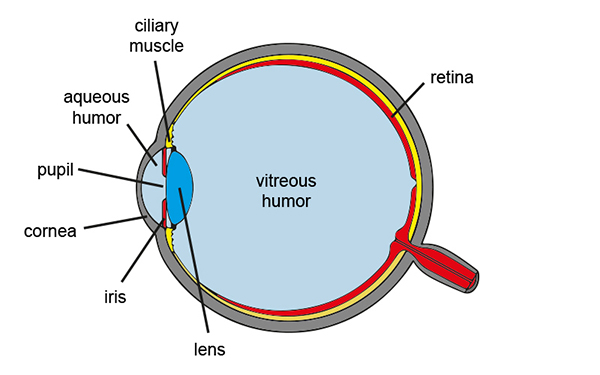 The eye consists of a thin, transparent, curved cornea at the front, a colored iris which forms a pupil, a frontal chamber filled with fluid (aqueous humor), a crystalline lens, ciliary muscles to shape the lens, and a retina to capture light. It’s like a camera with a two-element lens (cornea plus lens), a diaphragm (iris), an aperture (pupil), and a light sensor (retina). To varying degrees, all vertebrates’ eyes share these features, with their sizes, shapes, and functions reflecting evolutionary adaptations to diverse habitats. For example, fish eyes have spherical lenses that achieve focus by moving backwards and forwards—excellent for in-water vision but useless in air.

Normal human eyes, which pair a strongly curved cornea with an ability to change lens shape (accommodation), work well in air but poorly in water. That’s because water and the aqueous humor, which are on opposite sides of the cornea, have nearly identical light-bending properties. In water, the small amount of bending that still occurs at the cornea’s outer surface is almost totally reversed at its inner surface. This loss of corneal refractive power is a problem for most vertebrates, especially for species with very rounded corneas. 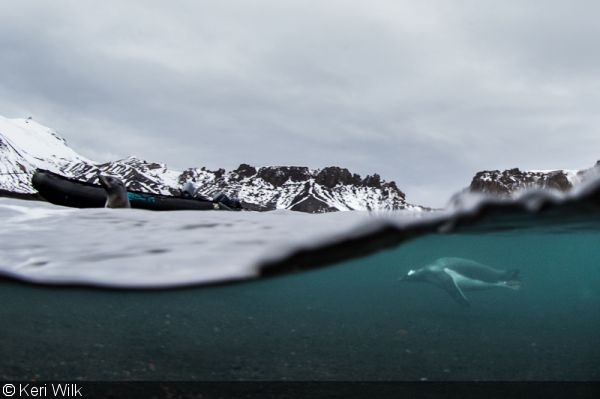 Penguins are flightless birds that live in the Southern Hemisphere, where they spend half their time foraging in the sea (to 650 feet) and the other half breeding and molting on land or ice. Anatomically, they have transitioned well to a cold aquatic habitat—wings became flippers, feathers became hairs, and bodies became counter-shaded and insulated with blubber. But what happened to their eyes? Figure 2 shows a typical penguin eye, with its nearly flat cornea and a somewhat spherical lens. This is very unusual: The penguin is one of the rare vertebrates with a flattened cornea. Is this feature good or bad? 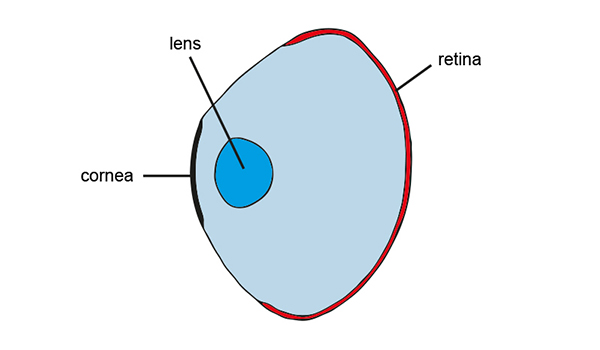 Nature is littered with examples of evolutionary meanderings that have led to remarkable blunders requiring sloppy follow-up. The human eye is one example: In front of the retina there is a tangle of nerves and blood vessels that not only obscure the light receptors but then are required to merge and tunnel through a portion of the retina that we call the “blind spot.” A compounding of errors.

But the penguin’s flattened cornea is not a blunder—it’s a brilliant adaptation for a diving bird. If it were perfectly flat, the cornea’s refractive power in air and the corneal power loss in water would both be negligible, and the penguin’s eye would function (almost) identically in both media. Focusing would be nearly 100% by its lens. But there is a slight curvature, and the cornea contributes about 25% of the total refractive power (compared to 70% in humans). 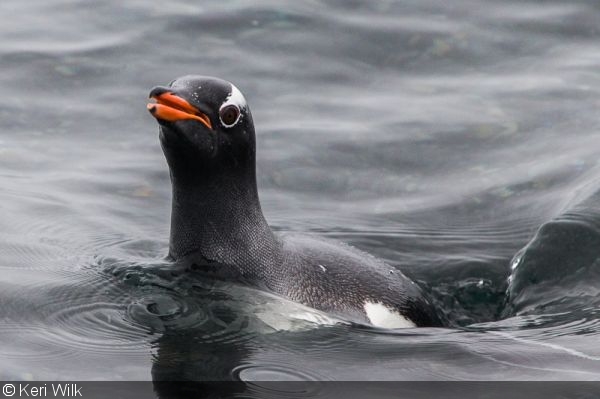 Studies based only on the eye’s refractive capabilities have shown that penguins should be emmetropic (have normal vision) in water and should be short-sighted in air (see Figure 3). Since the latter is unlikely, some other mechanism must come into play. One hypothesis, based on evidence that penguins severely constrict their pupils in air (to about 1mm across), is that the muscular activity that shrinks the pupil also flattens the small portion of the cornea directly in front of the pupil, and thus removes the near-sightedness. Some mysteries remain, but there is no doubt that this creature’s eyes have evolved for use in an underwater habitat. 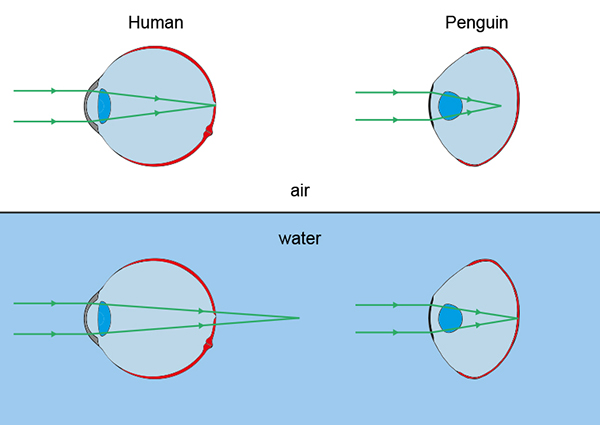 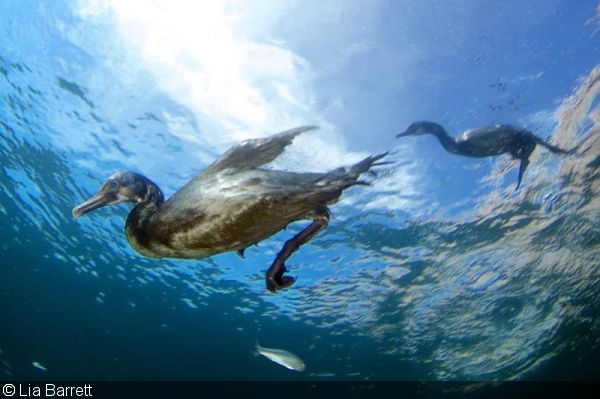 Cormorants are both abundant and widespread geographically in temperate to sub-polar regions. They are both active fliers and pursuit divers, nesting in cliffs and diving for fish. Their adaptations for hunting in the sea include webbed feet, denser bones than normal birds (less hollow), feathers that are water-resistant near the skin for trapping air (insulation) and water-absorbent elsewhere to reduce buoyancy. They are usually benthic hunters, descending on average to about 30 feet, but the blue-eye shag has been known to reach 500 feet.

Although cormorants spend less time in the water than penguins, they are better foragers. In fact, the great cormorant (Phalacrocorax carbo sinensis) is the most efficient marine predator on the planet, averaging 17–41 grams of fish per minute spent underwater. Assuming they’re visually guided foragers, this level of predation success would lead one to believe that the cormorant eye has features that produce excellent underwater vision. Does it? 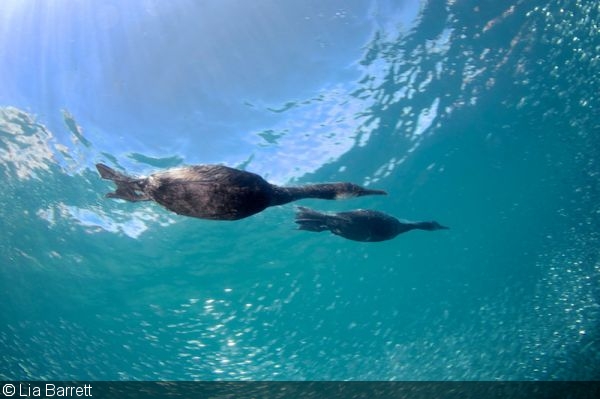 The cornea of the great cormorant is very curved, having a power of about 60 diopters, which is about 20 diopters more than that of the human eye. Like us, it loses most of that power when immersed in water. But studies have shown that its underwater focusing ability is normal. One way to accomplish this would be to add more curvature to the cornea, but there seems to be no mechanism for that. There must be another way. Indeed there is: It has enlarged iris and ciliary muscles and a very pliable lens, so much so that the curvature of the front surface of the lens can increase by 64 diopters, which is more than required for overcoming the loss of corneal refraction. The cormorant has an extraordinary ability to accommodate its vision for exploiting both terrestrial and underwater habitats.

However, good accommodative ability does not imply a good ability to resolve detail (visual acuity). Acuity also depends on the quality of the retina, brain, neural processing, and the viewing environment. The cormorant’s visual acuity in air is worse than that of other birds and underwater it is very poor, on par with that of the unaided human eye. It can detect individual fish when they are within a meter, but beyond that, everything is a blur. 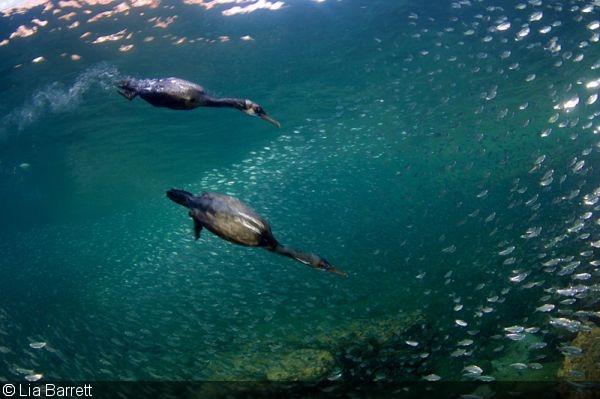 The term “sea gypsies” is applied to a number of tribes in Southeast Asia, but mostly to the Moken, peaceful sea-faring nomads who have inhabited the west coast of Thailand and the Mergui Archipelago of southwest Myanmar for nearly 4,000 years. Living primarily off the riches of the sea, they have roamed between islands in response to changing circumstances and needs. The number of Moken still pursuing their traditional lifestyle has dwindled, but the several thousand that remain continue to live on thatch-roofed boats from which they gather crustaceans, mollusks, sea cucumbers, and turtles using their exceptional skills at free diving and spearing.

In particular, Moken children have the remarkable ability to identify and gather small food items from the sea floor without the use of visual aids. Good underwater vision should be essential for this activity, so how do they do it? A scientific study at Ko Surin (Thailand) involving 17 Moken children and a control group of 28 European children produced some astonishing results.

Figure 4 – Schematic diagrams of pupils underwater: The Moken child’s pupil (left) is smaller than that of a European child (right)

First, the eyes of both groups of children were tested in air—they worked the same. Underwater, however, the measured visual acuity of the Moken children was twice as good as that of the control group. If the Moken children had been myopic in air, that would have been the easy explanation, since myopia improves underwater vision. But their eyes were normal. A second possibility was an extraordinary ability to reshape their lenses, but that was also not true. Nor was it a side effect of the diving reflex. Further investigation revealed the answer: The Moken children were constricting their pupils to a diameter of about 2mm, the physical limit of human capability.

As photographers we all understand that a smaller lens aperture produces greater depth of field and reduces the peripheral aberrations associated with imperfect lenses. It produces a sharper image. This is what the Moken do. They have adapted to life in the sea by mastering the extremes of pupil constriction and lens reshaping. Is this “superhuman” ability genetic? Subsequent studies have determined that this is a learned response; any child can be trained to do this in about six months. The human eye is more flexible than we knew. Humans are not the only animals that can shrink their pupils underwater. Seals, dolphins, and sea snakes can also do it. Convergent evolution, perhaps? 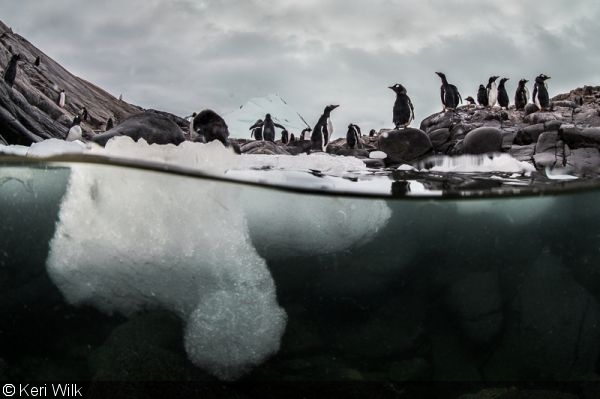 
...
You must be logged in to comment.
Support Our Sponsors
Advertise With Us
Newsletter
Travel with us