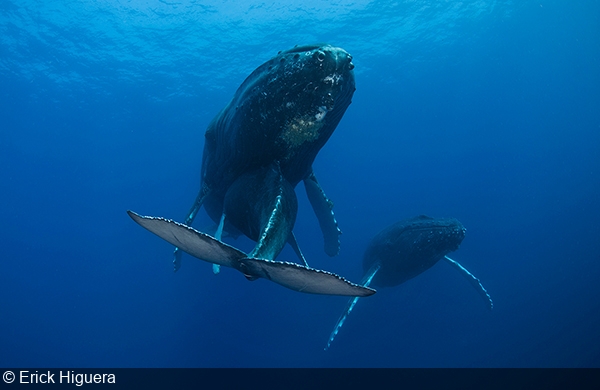 Our latest Videographer of the Month feature showcases the work of Erick Higuera, a multi-award winning wildlife filmmaker, photographer and marine biologist who specializes in marine wildlife films and aerial cinematography. For over 20 years, he has explored the waters surrounding the Baja California Peninsula, Guadalupe Island and the Revillagigedo Islands, filming and photographing white sharks, giant mantas, whales, dolphins, billfish and other spectacles in the deep blue off Mexico’s Pacific shores.

His work has appeared in various natural history documentaries including BBC Natural History Unit, Discovery Channel, National Geographic, Shark Week and Canal Once. He is also a proud member of Pelagic Life, a non-profit civil organization with the mission to protect the marine megafauna in the Mexican open ocean through awareness, using inspiring images, sustainable ecotourism and by promoting responsible seafood consumption. Erick’s catalogue is filled with amazing images of some of the ocean’s largest inhabitants.

He’s also a marine scientist and one of the principal leaders of Manta Pacifico group, whose mission is to lead scientific research of the oceanic giant manta in the Revillagigedo National Park and the Gulf of California with the objective of helping to create better management plans in order to increase the conservation of the species. We recently caught up with Erick to discuss his work and learn a bit more about one of Mexico’s finest filmmakers.

Many years ago, working on-board the Solmar V luxury yacht, I met the pioneer of white shark cage diving in North America, Lawrence Groth. He taught me the basics of how to properly shoot a dedicated professional video camera, the Sony HDR-FX1. Eventually, it became part of my work to edit the countless hours of great white shark footage that we both have accumulating together in Guadalupe Island using the self-propelled ocean cage “SPOC” aka “Pelagic Explorer” aka “#5”. Lawrence also taught and got me into video editing professionally. Simultaneously, I was taking photos with my first DSLR camera, the Nikon D60, and a Tokina 10–17mm lens.

It was more than 15 years ago: the first time I saw a video—which was taken by some fishermen from their boat—of some orcas charging and attacking a group of Munk’s pygmy devil rays, commonly named “mobula manta rays” by the locals. Since then, I was curious about what it would be like to film that natural event in the water. Through research and collaboration with some expert cetacean marine researchers, close friends, as well as local fishermen, we learned a little more about the movement patterns of some families of orcas. It was not until 2018 that we finally managed to keep up with them for two months until we achieved our goal, to film this impressive natural event. Not only did we see them eating devil rays, but also other species, including sharks.

Definitely Revillagigedo National Park and off the coast of the Baja California Peninsula.

Diving in the Revillagigedo Islands many times with the same humpback whale individuals over a period of 10 years, I think, has been the most momentous and crucial feature of my career. Also, as part of a scientific project, documenting juvenile white sharks chasing bat rays as well as yellow-tailed jacks at the bottom of Guadalupe Island; as well as current work filming and documenting ongoing scientific research on orcas’ hunting strategies in the Gulf of California.

Of course! In 2015, we witnessed how two adult male orcas attacked a family of three humpback whales, the mother, her calf and an escort, off Roca Partida, Revillagigedo. The conditions were perfect for keeping track of the entire event and even entering the water. However, for safety and responsibility reasons, given the large number of diving clients that went on that trip, we did not obtain the boat captain’s permission to enter the water.

Shooting with the Canon EOS-1D X Mark II gives me the opportunity to take pictures and videos. What I normally do, if it’s a one-time event, is shoot video first, and if the opportunity is still there, switch to taking pictures. Actually, I wanted to pursue a career and have a job as an underwater still photographer, but one thing led to another and other windows and opportunities opened up throughout my career that ended up directing my path toward ocean wildlife natural history cinematography. 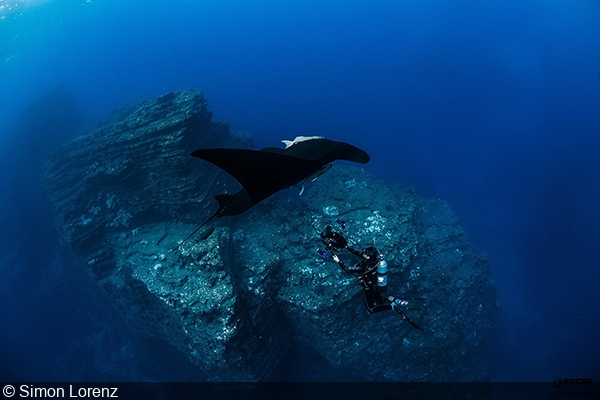 As a responsible underwater photographer, you should always respect marine wildlife before taking the photo. No image is worth destroying or disturbing our oceans. Always be aware of your surroundings and the water conditions. You don’t need a big, expensive camera. No matter what camera you have, you just need the passion to use it, get out there, practice, practice and practice to master your skills and always be creative. Tell a story through your images. 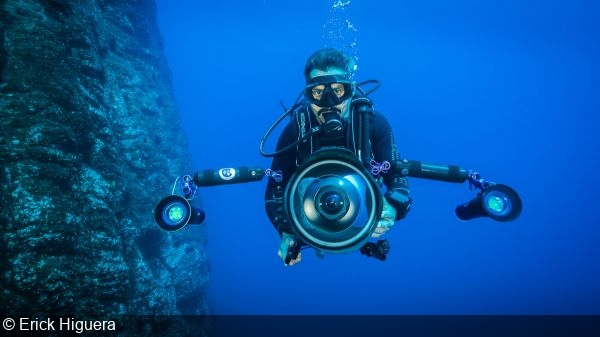 To keep up to date with Erick’s trips in Socorro and view other films he has produced in the region, check out his awesome Vimeo page.