Editor’s Note: To show the power of what you can accomplish in Photoshop, we asked Conor Culver, one of the best digital artists around, if he would be kind enough to share his vision with us. Conor is an award-winning photographer and artist who specializes in an art form known as Underwater Surrealism. His jaw-dropping works will bend your mind and challenge your perception. Here, he takes us, step by step, through one of his most complex creations. “Poison Tree” won Silver in the Commercial, Conceptual & Fashion category of the 2017 Our World Underwater Photography and Video Competition. 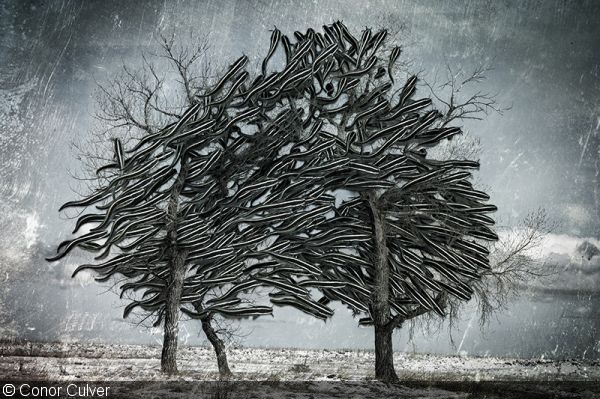 “Poison Tree” by Conor Culver is a masterpiece of digital art

The idea for “Poison Tree” came to me while I was diving in Ambon, Indonesia. I had photographed some striped eel catfish, and seeing these fish swim together as a unit, in a ball, reminded me of leaves on a tree blowing with the wind. Knowing that these fish are poisonous, I wanted to create a scene that featured a cold, dead tree to reference that fact. After a small snow storm back home in Colorado, I found a group of trees that would become my setting for “Poison Tree.” Fish from the Coral Triangle in Southeast Asia and trees from frozen mountains in Colorado—nothing could be more surreal than that! 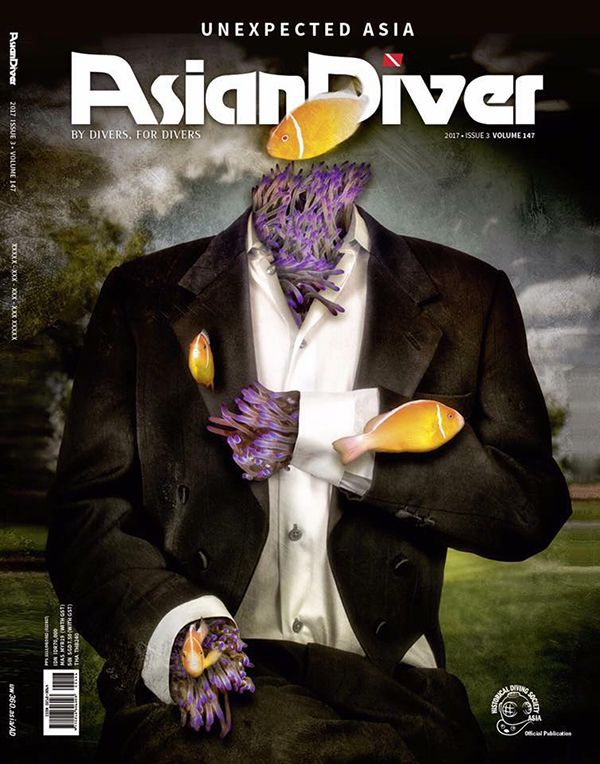 The whole thing started with the worst part—the slow process of masking and clipping the fish out of the original image. I used two different tools here: the Pen Tool and Quick Mask. I first used the Pen Tool (shortcut P) for all the hard edges and a general selection of their tails. For the close-in work on the fish tails, which are soft, I used masking. There are many individual fish, and tons of small gaps between them. This means a huge amount of masking! Cutting out all the fish was a very tedious process that took many weeks. 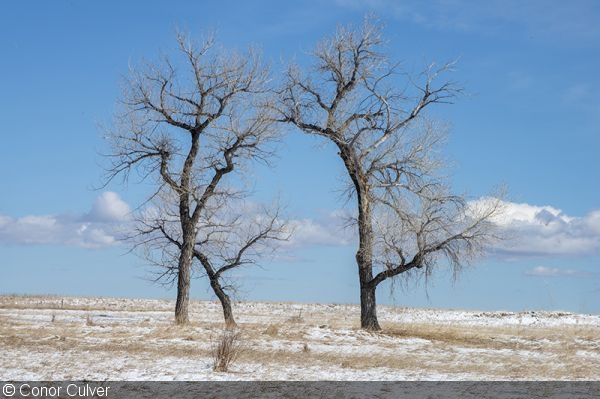 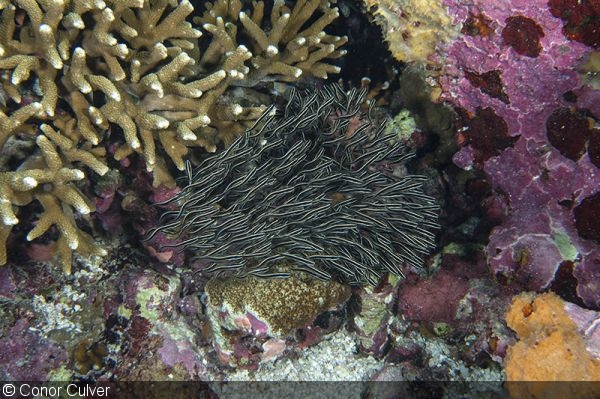 With the Pen Tool selected, I hit Q, which will puts me into Quick Mask mode. What is now selected is displayed in red, which allows for easily visible editing. Using the Brush Tool (B), I painted in everything I wanted to show, and painted out what I didn’t want. This technique works well for tails and fins because they are soft and transparent in certain areas. With the Brush Tool, I can soften the brush and adjust opacity to compensate for the tails.

When painting on a mask, remember that white reveals, black conceals. White will add to the selection and black will remove from your selection. Using the X key, you can swap between white and black quickly and easily. When finished masking, hit Q again and it will exit Quick Mask mode and leave you with your selection.

The last step here is to save this selection by going Select > Save Selection and name it whatever you want. You can end up with a number of different masks, so this allows you to keep them all organized and save a lot of time. If I need to modify a mask in the future, I can simply load this saved selection instead of starting over. 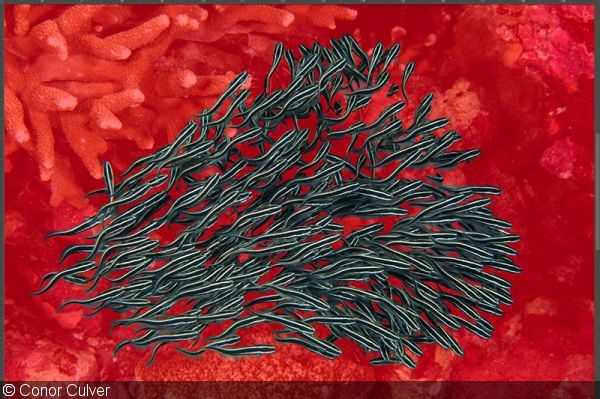 Here is the mask, you can see the masked-out area in red

Now on to the background image of the tree. I decided to paste the fish right onto the image, and then blend them together later. To paste the fish into that scene I hit CTRL+C (⌘+C), and while the selection was active, hit CTRL+V (⌘+V). That sequence pasted the fish onto the tree image.

With my entire composition coming together, I could see that I had some stuff in the background image that I didn’t want. To fix this, I cropped the image and removed the grassy area. My goal was to keep the viewer’s eyes on the tree and the fish. 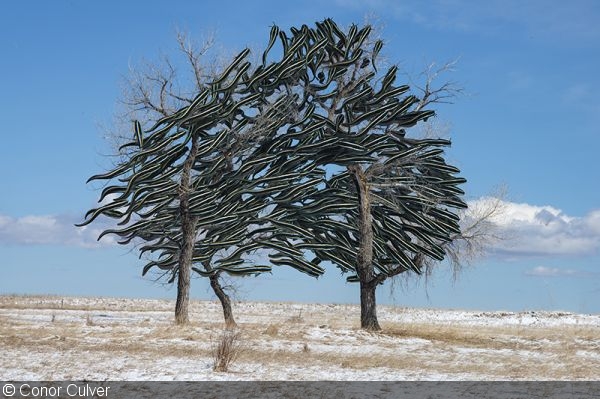 With the fish in and the scene complete, it was time for more masking. Photoshop isn’t like a one-click Instagram filter: It requires vast amounts of time and patience. I really wish there was such thing as a “Make It Cool” button! I added a layer mask, which is the button at the bottom of the layers panel.

Once again, using the brush, I painted out the areas I wanted the fish to be behind the tree and branches. This process created a sense of depth to the image, if all the fish were on top of the tree it wouldn’t look right. Even though this is surrealism, it is still important to make it look realistic.

At this point, I began to add contrast to the image. I wanted to bring up the contrast, mostly in the mid-tones to create sharper details. To make this process easier, I used a couple of plug-ins. Depending on the look I want, I use either Nik Collection Color Effects Pro 4 or Viveza. For this image, I wanted more detailed contrast and used Color Effects and the filter called “Tonal Contrast.”

With the contrast adjusted, it was obvious that the sky was much too bright and cheery. To fix this, I took down the saturation of the blue sky, giving the image a cold, desolate look. How did I reduce the saturation? Go to the Layer Adjustments panel and select the Hue and Saturation layer. Click where it says “Master” and in the drop-down select “Blues” and bring down the saturation. This lets you work on single colors, instead of the entire image. For underwater photography, this is an incredibly powerful tool. 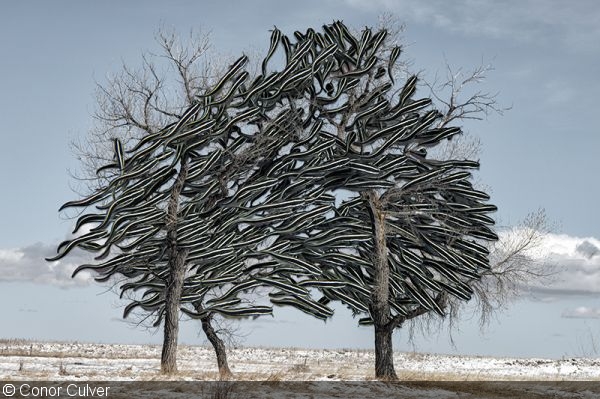 After the contrast adjustments have been made, the image begins to get depth

Finally, I reached the step where I needed to look at where the light source is coming from. When you create a composite image, it is very easy to forget to account for the light source. You can’t have an image where the fish have shadows on the left and the tree has shadow on the right. There are so many poorly created images, and this is usually what makes them fail.

In this case, the sun is high up, behind the tree and off towards the left. This tells me where the shadows of the fish should be on the branches. To make these shadows on the branches, I wanted to burn them in. Personally, I never use the Burn and Dodge Tools in Photoshop, since those tools are destructive to the image. A better way to do this is to create a new burn and dodge layer and use the Brush Tool to brighten and darken areas. 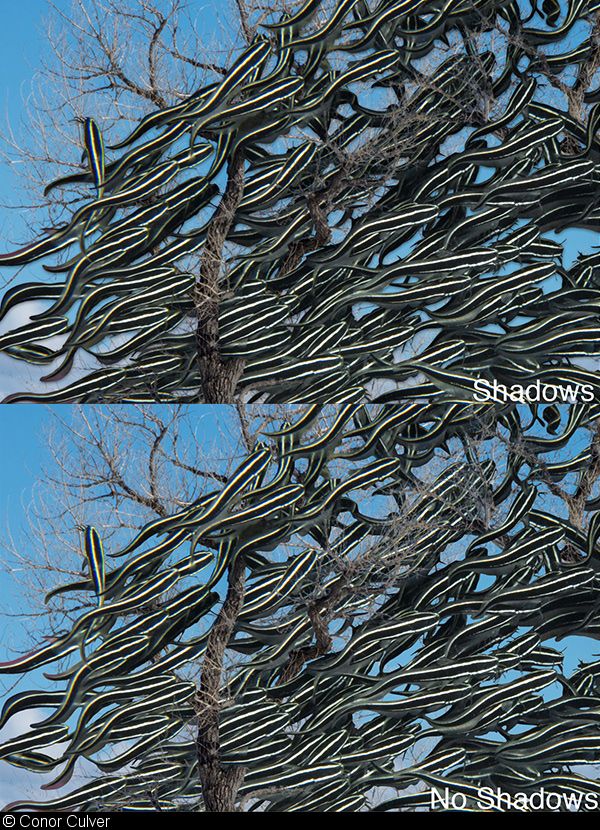 To do this select Layer > New > Layer. Now a box will appear, click where it says Mode and drop-down to “Overlay” and check off “Fill with Overlay Neutral Color (50% Gray).” This creates a non-destructive dodge and burn layer where you use the Brush Tool to dodge and burn. Bring the opacity of the brush down to 5% and take the hardness of the brush all the way down to 0. 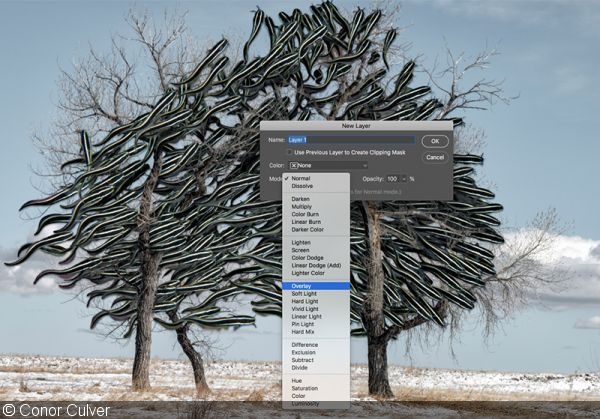 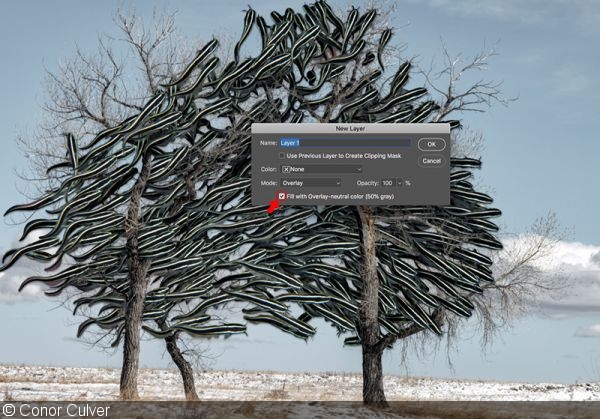 Here is how to apply the dodge and burn effects—an easy, yet powerful, technique

Since both images are shot with different lighting—underwater using strobes and the tree with natural sunlight—I needed to match the light color. This step is just as important as the light source, and it is also where many digital art pieces fail. In this case, the strobes had a yellow hue to them, while the natural sun was much closer to white light.

I had to correct this to unify the entire scene. Using the “Photo Filter” adjustment layer, I chose a subtle color to match the scene. Since I wanted this image to be “cool,” I used a light blue filter, which had the effect of making both images appear to have the same light source. 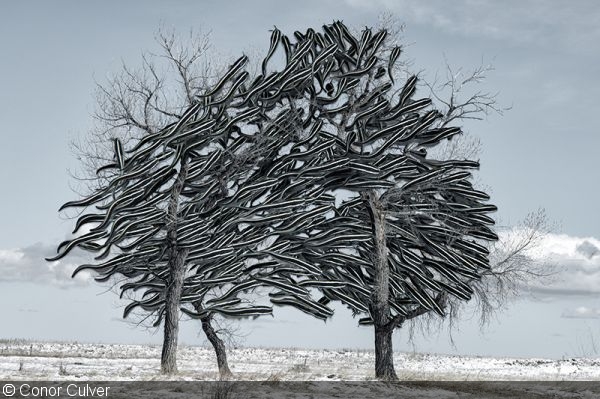 There are a wide variety of opinions on vignettes. These days, they are almost exclusively created in post-production, and as such they will tell your viewer that the image has been manipulated in some way. For this reason some people don’t use them, as they want to hide their Photoshop or Lightroom use. Underwater surrealism, on the other hand, is all about digital art, so I jumped right in.

To create my vignette, I used a plug-in filter from Alien Skin called “Bokah 2,” which is amazing for creating depth of field. There are ways to do this manually, but this filter makes it vastly easier and you have more control of how the vignette will appear around the edges. This step really brought the focus of the viewer squarely where I wanted it to be and brought the images together. Finally, I was at the point where the scene could trick the eye into believing it was all one image. 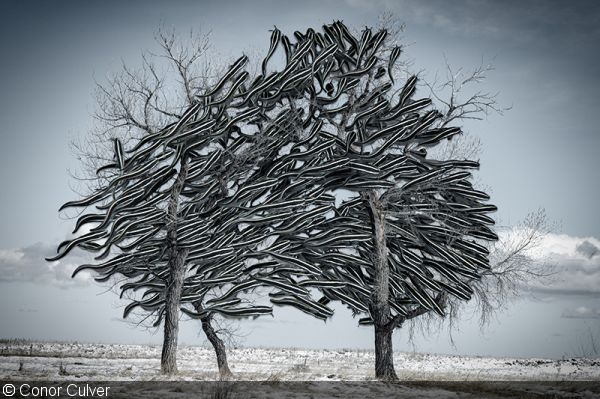 For this layer, I once again burned in some of the branches to help blend the fish into the scene. To save time, I just used my original burn and dodge Layer created earlier and added more to it. By this point in the process, I was really fine-tuning things and doing small adjustments. However, it is important to remember that it is these small tweaks are critical to creating a highly polished and believable result. Too many photographers are in a hurry and leave the little details out—and the quality and effectiveness of the final image suffer. 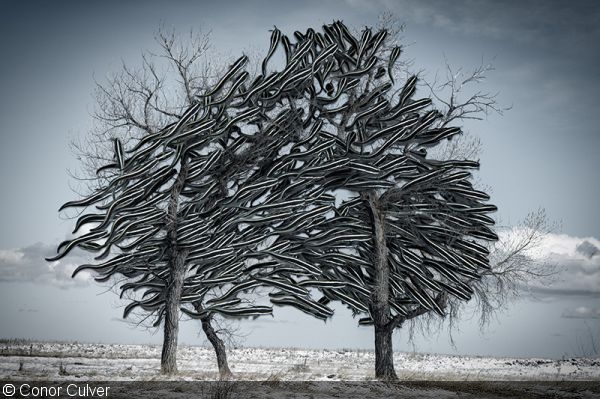 Finally, the last step! Now I wanted to bring in texture. I love old film textures and use them the most. You can find a variety of film textures and plug-ins for this online. To get this effect on my image, I found a texture I liked and pasted it over the entire image. I then blended it with overlay or soft light from the “Blending Mode” drop-down box. In this case I used overlay because I wanted the texture to be very apparent in the final image. I also applied a layer mask and masked out the areas I didn’t want texture to be as pronounced. Texture is the key for tying multiple images together. It tricks the eye into believing the image is one shot, even if your brain knows it can’t be real. 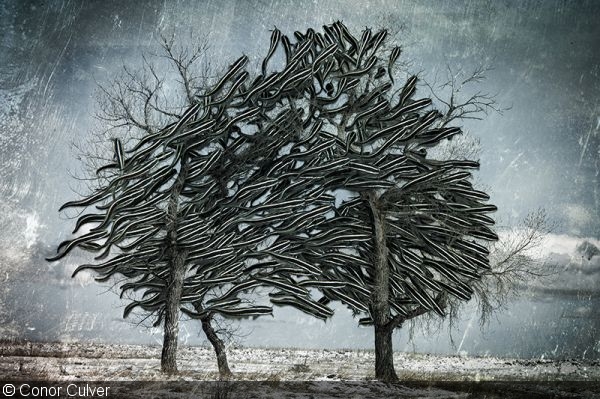 Feel bad about “Photoshopping” your image? Did you know this debate has been going on since photography was invented? One of the world’s most famous photographers, Ansel Adams, and the Group f/64 were all purists—never enlarging prints and preaching pre-visualization. They saw the shot in camera as exactly how it should be and used the Zone System to get all the tones in the print. They wouldn’t even crop their images they believed to be “perfect” in camera. 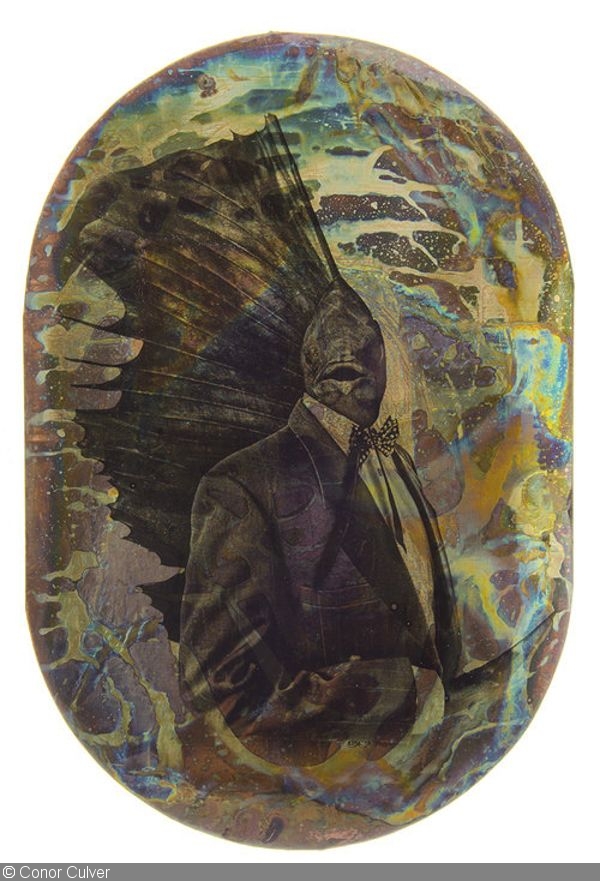 On the other side, and in response to Adams, my favorite photographer Jerry Uelsmann wrote the article “Post-Visualization,” where the darkroom is just an extension of the camera—exactly the same way I view Photoshop. Jerry heavily manipulated his images in the darkroom using up to 15 enlargers and blended multiple images together all in the darkroom and in film. It may be a shock for many to learn that the darkroom was not some holy sanctuary where film was never manipulated. It’s been a thing back and forth for a long time since the post-visualization article came out in 1967, and Jerry is well into his 80s now. So don’t hold yourself to an artificial standard, embrace the debate and appreciate what both sides bring to the table.

About the Author: Conor Culver is an artist living in Colorado, USA. He is best known in the dive community for his underwater surrealism work, which is featured in galleries worldwide. A lot of his work ends up on a variety of media, including metal. Check out his website and prepare to have your mind blown. If you are in the Santa Fe, New Mexico area, you can check out one of his current gallery exhibitions at the Photo Historica.