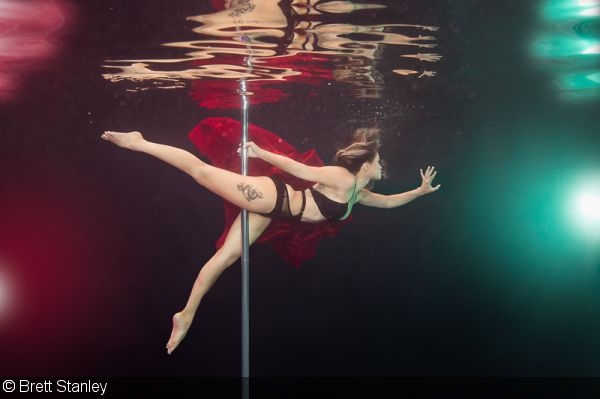 It’s dim and hazy. Only a pair of bright neon lights streaks through the dark environment. A beautiful woman slides down a pole with ease, her crimson cape flapping around as she twirls about. But this is no nightclub. It’s about 10 feet below the surface in an underwater art studio. 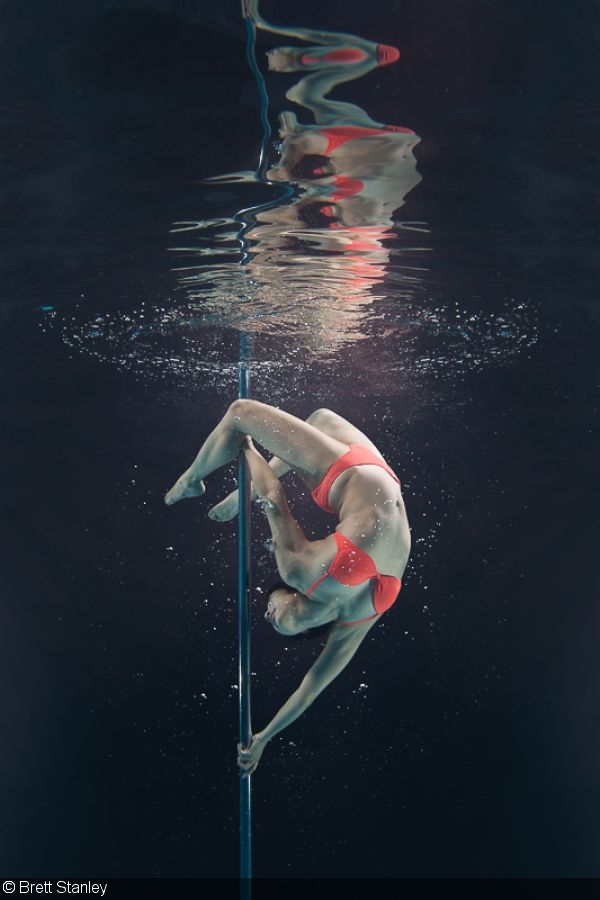 The project originated when Stanley wanted to experiment by bringing aerial performances like trapeze underwater. To his pleasant surprise, it was the images of pole dancers that grabbed the attention of viewers. When this clicked, the California-based shooter began to recruit more brave performers to take their talents into the water. But the shooting process isn’t without its risks.

“These performers are usually high up above the ground with a high risk of injury,” explains Stanley. “So taking it underwater sort of [replaces] the risk of falling with that of drowning.”

To limit this risk, Stanley spends a lot of time preparing his models for the shoot. He describes the planning as “pretty detailed,” given the fact most of the dancers have no underwater modeling experience of any sort. Every element is covered, from how to achieve the desired pole dance pose down to the nitty-gritty of choosing the right amount of makeup for in-water work. 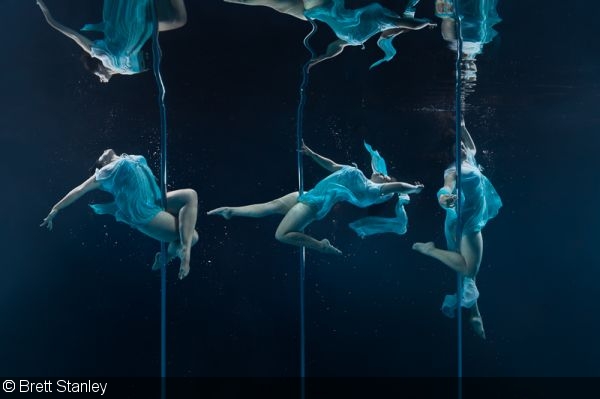 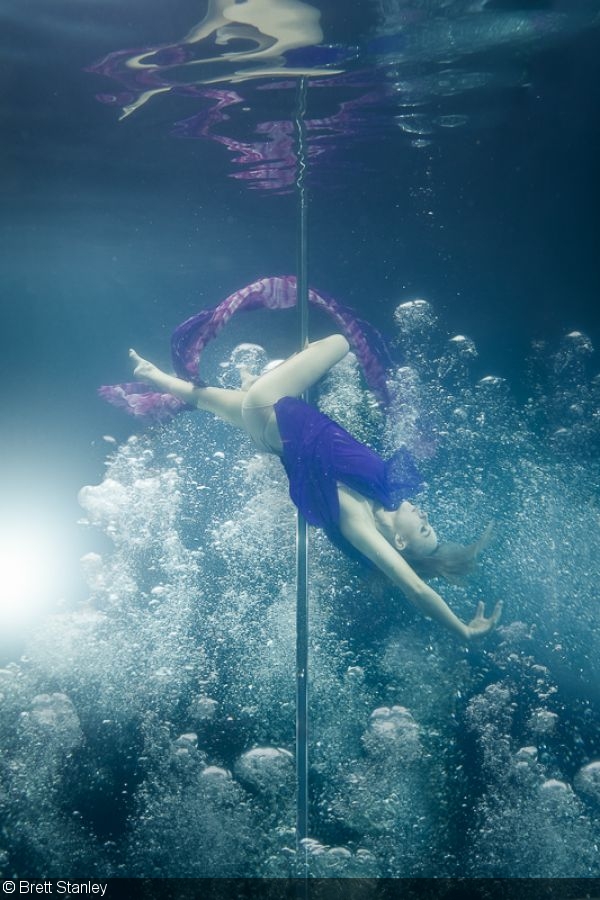 Water safety is another key aspect, especially with the use of long fabrics that could get tangled around the pole. Stanley says, “I go through the safety aspects of the shoot with each model before they hit the water, how to breathe correctly and safely signals in case of issues.” A safety team is always on hand.

Stanley is driven largely by experimenting with lighting and composition of the subjects. He comes from a self-described cinematic-style background, where a “three-point lighting system” is commonplace. Concerned with the logistics and potential backscatter produced by this setup, the underwater portrait photographer has transitioned to a more traditional two-strobe system attached to the housing.

Compositionally, Stanley likes to keep it simple, usually centering the pole and model in the middle of the frame. By experimenting with the angles at which he shoots the model, Stanley is able to include a symmetrical reflection at the top of the image. In some images, he’s added streams of bubbles as other compositional elements. But the bubbles aren’t from Stanley’s tank: “I don’t use scuba very often for these shoots as I prefer to freedive and be free to move around,” he says. 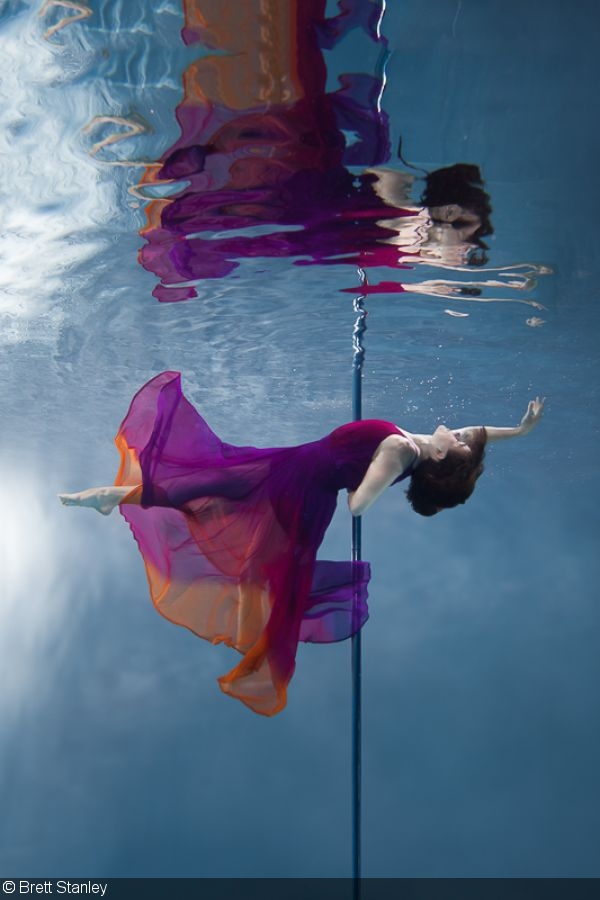 Pole dancing has a long history in multiple cultures around the world. In the 12th century, performances of the “Chinese Pole” were all the rage in circuses. This continues in the modern era with Cirque du Soleil. For 800 years, Indian wrestlers used pole dancing for strength training. Of course, these both influenced modern, Western pole dancing—a unique mix of fitness, erotica, and art.

This combination is evident in Stanley’s images—a blend of the flirtatious and the fanciful—that showcases pole dancing in the light it deserves. But the boundary-pushing photographer wasn’t always so sure. When he first thought of the idea he asked himself, “Would the performer be able to do the tricks and poses, and would it look any good?”

The answers: Yes and yes. 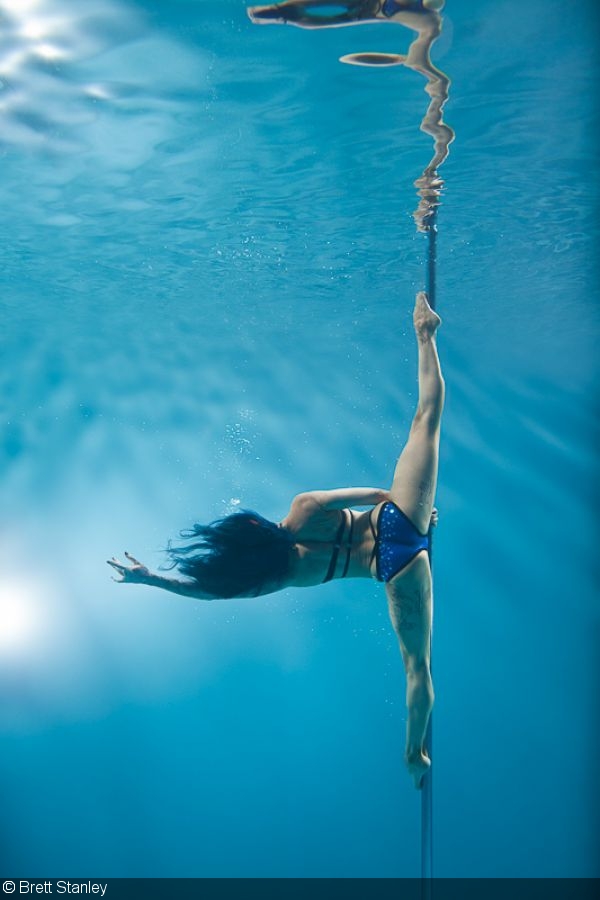 Susan Spillane wrote:
Thanks for sharing your amazing experience.