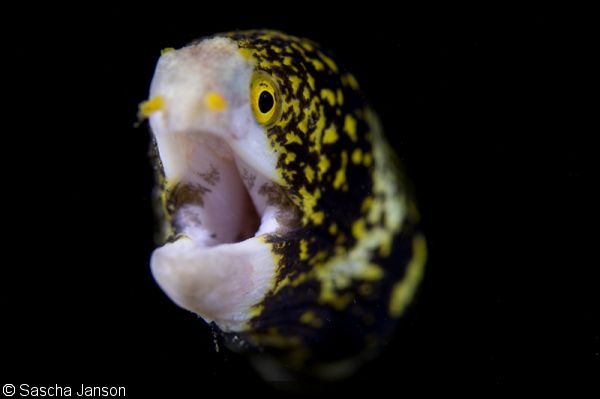 In recent years, there has been a flood of video lights onto the underwater imaging market. The emergence of LED lighting technology has made it possible to pack a lot of lumens into a small unit for an affordable price. With this cascade of LED video lights, manufacturers have sought to separate their products from the competition by offering different combinations of advanced features, such as red focus lights, optical triggers, and the ability to switch between flood and spot beams.

The simple truth is that there is no single best video light—there’s only the best one for your specific needs. Recognizing this fact, i-DiveSite has released the i-Torch Venom series—four compact, but powerful video lights ranging from 3,500–5,000 lumens. But selecting the Venom that’s right for you entails more than simply deciding on output power. Here, we break down the Venom c92, Venom 50, Venom 38, and Venom 35s, to help you find the perfect light for your needs.

Overview of the Venom Series

The four lights in i-DiveSite’s Venom series can be divided into two pairs: the more sophisticated Venom c92 and Venom 50, which each cost $975; and the simpler Venom 38 and Venom 35s, which set you back $749 each. The specifications table below gives an overview of the similarities and differences between the four models.

Each of the lights has distinguishing features and characteristics. However, the basic operation of each model is the same across the series. Each light has two push buttons. One powers the light on and cycles through its different modes, while the other cycles through the various power levels in each mode. The power setting and remaining battery life are indicated on a small display located between the two buttons. In the sections below, we’ll take each of the lights in turn and look at its features in detail, considering what sets it apart from the others in the series and what kind of image-maker it would be most suitable for.

The i-Torch Venom c92 is the flagship model in the series, boasting 4,000 lumens at a beam angle of 100 degrees. It’s the only light in the series that uses a 50W COB (chip on board) LED, with a CRI (color rendering index) of 92, which is designed to produce very natural and pleasing colors underwater. The light comes with a replaceable 50Wh Li-ion battery pack that can be recharged in under two hours when empty and lasts around 55 minutes at the highest power setting. The Venom c92 has eight modes: five power levels for the white light (100%/80%/60%/40%/20%), two levels for the red light (100%/40%), and an emergency SOS mode for signaling. 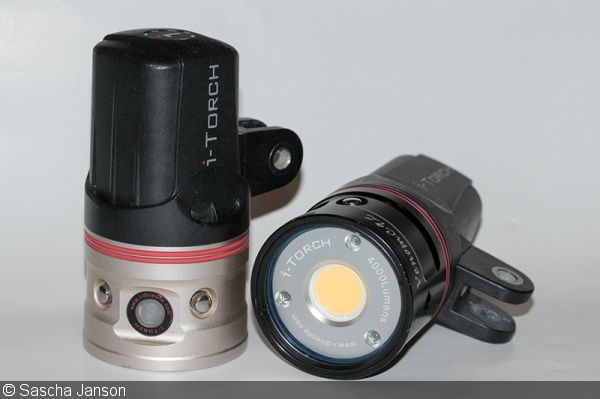 What Makes the Venom c92 Special

The Venom c92 can be used with an optional remote control via a fiber-optic cable, and this is where the light really comes into its own—giving you fine control right from the handle of your rig. A dial wheel on the remote allows you to adjust the power output in 10% increments while a push button switches between the modes (white/red). 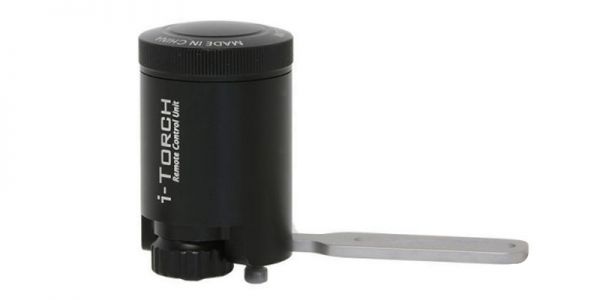 I-Torch’s optional remote control unit, which works with both the Venom c92 and Venom 50 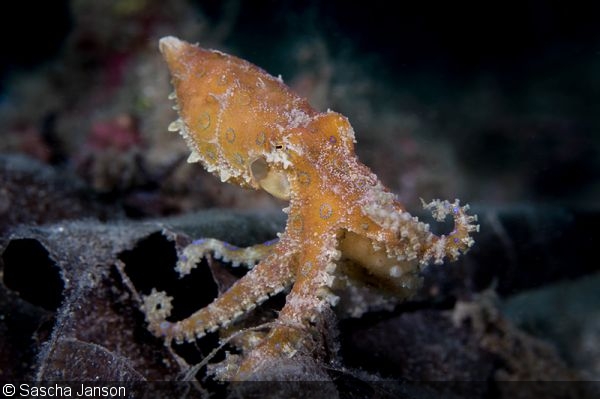 The remote can even operate two lights at the same time. So, for instance, setting one light to 100% white and the other to 60% white, you can switch both lights on and off using just a single button on the remote. There’s no fiddling around to switch on one light on the left and another on the right, which wastes time and might scare off skittish subjects. The responsiveness of the Venom c92, combined with the ease-of-use of the optional remote control will redefine how you think about using video lights.

Who Is the Venom c92 Perfect For?

The Venom c92 is ideal for the prosumer to professional videographer and still shooter that values ease of use and the power to light up wide scenes. The surprisingly warm and natural color of light produced by the Venom c92 is this light’s greatest asset—a quality of light that’s difficult to find in other LED lights. 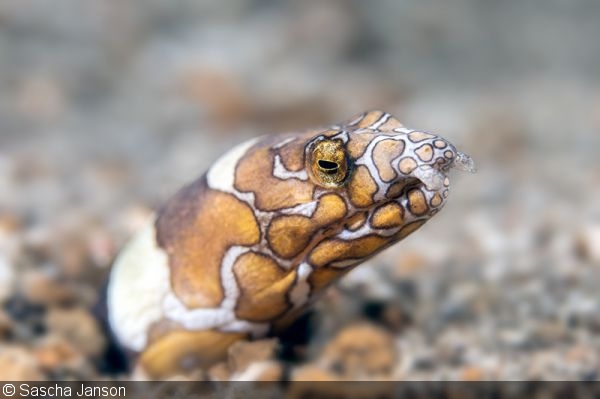 The i-Torch Venom 50 is the most powerful in the Venom series, with 5,000 lumens and a beam angle of 100 degrees, great for lighting up wide-angle scenes. The light comes with a replaceable 50Wh Li-ion battery pack that takes less than two hours to recharge from empty and burn time is around 50 minutes at the highest power setting. The battery is identical to that used in the Venom c92—only the head (LEDs) is different.

The Venom 50 offers the same eight modes as on the Venom c92—five power levels for the white light, two levels for the red light, and an emergency SOS mode for signaling—but there’s an additional ultraviolet (UV) mode (100% output only), which has you covered if you want to experiment with fluorescence imagery. 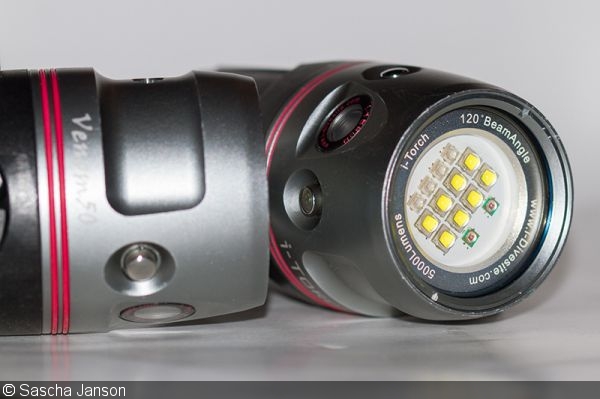 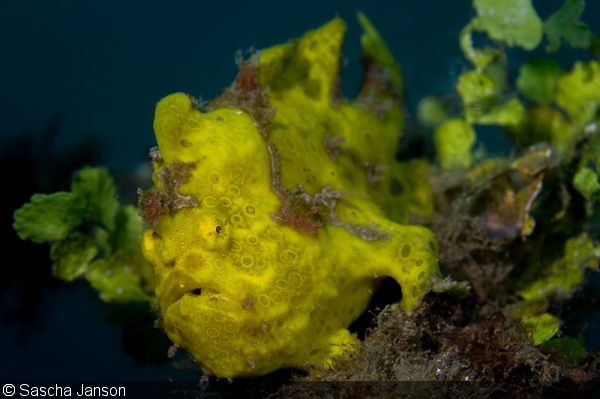 What Makes the Venom 50 Special

The Venom 50 may seem to be pigeonholed by its high lumen output, but it really shines for its flexibility in many different shooting situations. While it can pump out an impressive 5,000 lumens at a 100-degree beam angle, you can also add just a touch of light when required by adjusting at 10% increments via the optional remote control. There’s also the red light, which does a great job as a focus light for super skittish subjects that would otherwise scram at the site of white light. For something completely different, you also have a UV light built in if you want to indulge your fluoro-diving fantasies.

Who Is the Venom 50 Perfect For?

Intermediate videographers and photographers using a DSLR or mirrorless camera will find the Venom 50 powerful and versatile. Those who want to do the odd fluoro dive will love the fact that they don’t need an additional UV light. 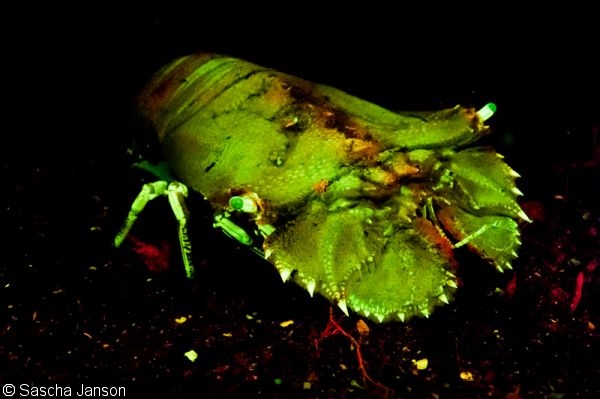 The i-Torch Venom 38 packs 3,800 lumens and comes with a replaceable 3,400mAh/38Wh Li-ion battery pack, which has a burn time of 60 minutes on the highest power setting. It can be recharged from empty in approximately two hours. The Venom 38 has four power levels (compared to five on the Venom 50 and c92) using the white LEDs, two using the red LEDs, and one in its UV mode. i-Torch’s optional remote control is not compatible with this model or its less powerful sibling, the Venom 35s. 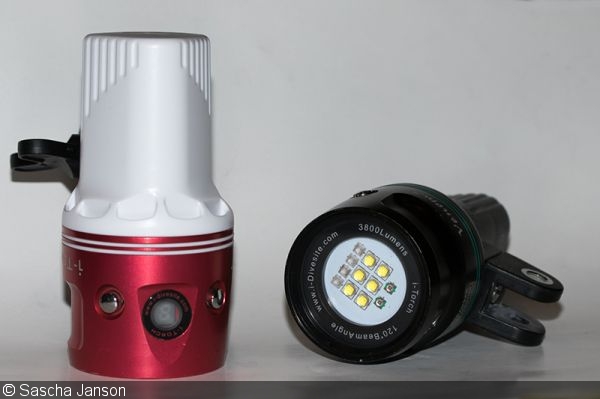 What Makes the Venom 38 Special

One could argue that the Venom 38 is the workhorse model in the series. Sure, it doesn’t have a 5,000-lumen output, and it can’t be operated by remote control, but for most video and photo situations, the Venom 38 delivers. It has a slightly warmer output than the Venom 50, which will help bring desired reds back into the image for less experienced videographers. And for those looking to experiment, you still have UV mode and the red focus light available. 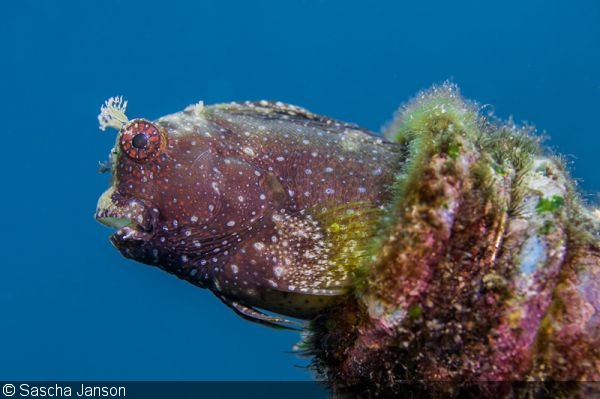 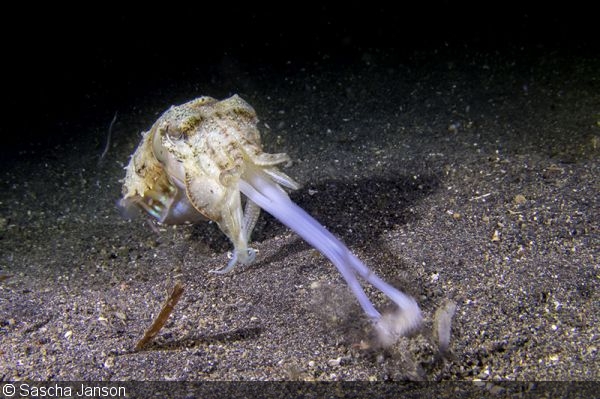 Who Is the Venom 38 Perfect For?

The Venom 38 is a great choice for the photographer looking for a solid focus light in red or white, who also wants to experiment with video and UV imagery.

The i-Torch Venom 35s distinguishes itself from the other models in the series by having both flood and spot modes. As with the other lights in the series, the Venom 35s comes with a replaceable Li-ion battery pack (3400mAh/38Wh), which can be recharged from empty in under two hours. At the highest power setting, the light is good for around 60 minutes. The Venom 35’s modes, in sequence, are white flood, red, white spot, and off. The light offers 3,500 lumens in flood mode and 1,000 lumens in spot mode. 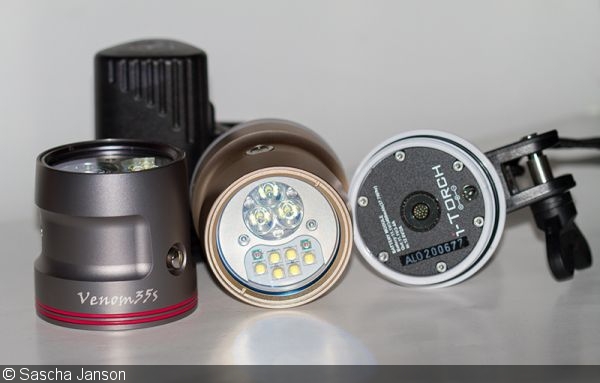 What Makes the Venom 35s Special

The Venom 35s is defined by its versatility. This video light is ideal for macro videography, but it is also powerful enough to do close-focus wide-angle video and stills. It may not be sufficient to cover larger scenes in terms of power output, but the handy spot mode is a real boon. This mode, which switches the beam angle to 18 degrees, is excellent for snooting and directional lighting of critters. It also serves as a backup torch, or as a light for your dive model if shooting wide angle. All of that from just one compact light. 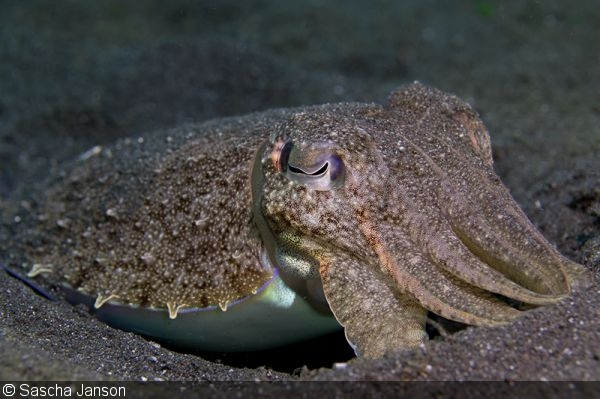 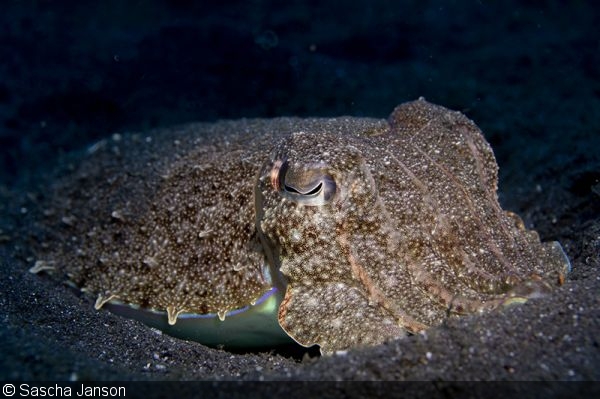 Who Is the Venom 35s Perfect For?

The Venom 35s is a less-expensive option for the more casual still shooter or action camera videographer who wants a video light that serves a multitude of functions.

The increasingly crowded market of LED underwater video lights can be tough to navigate. It seems like every manufacturer these days has a dozen different models, with each claiming to be the best and brightest. For its part, with the i-Torch range, i-DiveSite hasn’t attempted to make the do-all video light, but instead created a range of lights designed to cater to different kinds of shooters.

Tailored to a range of users, from more casual diver to the seasoned semi-professional, each of the four lights in the Venom series offers its own particular combination of specs and functions, but without sacrificing light quality or output power. 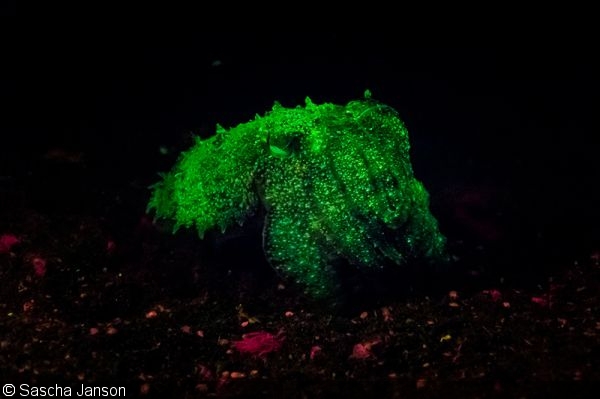 This review was undertaken in the Lembeh Strait, Indonesia, staying at Lembeh Resort and diving with critters@Lembeh Resort.