Editor’s Note: Sumer Verma’s split image of a turtle took home the “Best in Show” award at Our World Underwater 2014. It resulted in a combined prize of $1000 cash and a free trip aboard the Seven Seas Liveaboard. Enter your images in the 2015 Underwater Competition Series to win your share of $90,000 in prizes.

My award-winning image, titled “A Journey Begins,” was shot in the Lakshadweep Islands off the west coast of India, where I worked as a diving instructor for more than a decade.

It was just another fabulous morning in paradise when we were greeted by a number of baby turtles that had just hatched. We woke up to the site of the tiny animals swimming in the shallows surrounding the dive center. It was likely the fortunate result of the turtles following the light left on by the resort at night.

With more than a dozen baby turtles swimming about, I ran to get my camera and hopped into the water. Much to my disappointment, they scattered and swam away at top speed as soon as they sensed my presence. I was sure I was going to mess up this wonderful opportunity to get some great pictures.

I decided to follow just one of them and kept following her until I got close enough for a split image with my wide-angle lens. I finished the day with only a couple of usable images from the whole episode, but it was still a hugely memorable experience. 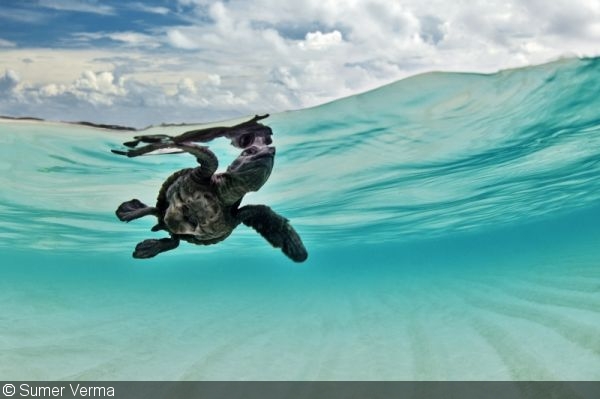