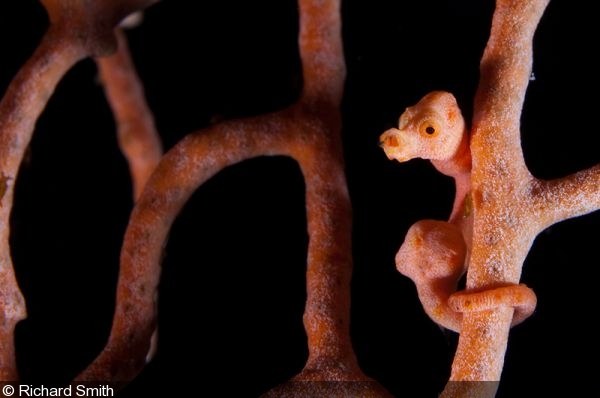 Pygmy seahorses are a group of diminutive fish measuring 1.4–2.7 cm in length, from the tip on the snout to the tip of the tail. The first species, Bargibant’s pygmy seahorse, was discovered in 1969 by a museum curator in New Caledonia. It wasn’t until the beginning of the 21st century that the six other species were scientifically described.

All seven species share several morphological adaptations for their small size, which distinguish them from other seahorses. Pygmy seahorses are found only in the Coral Triangle area of southeast Asia and nearby territories. Pygmies are charismatic and photogenic, but their small size makes them both challenging and delicate subjects. 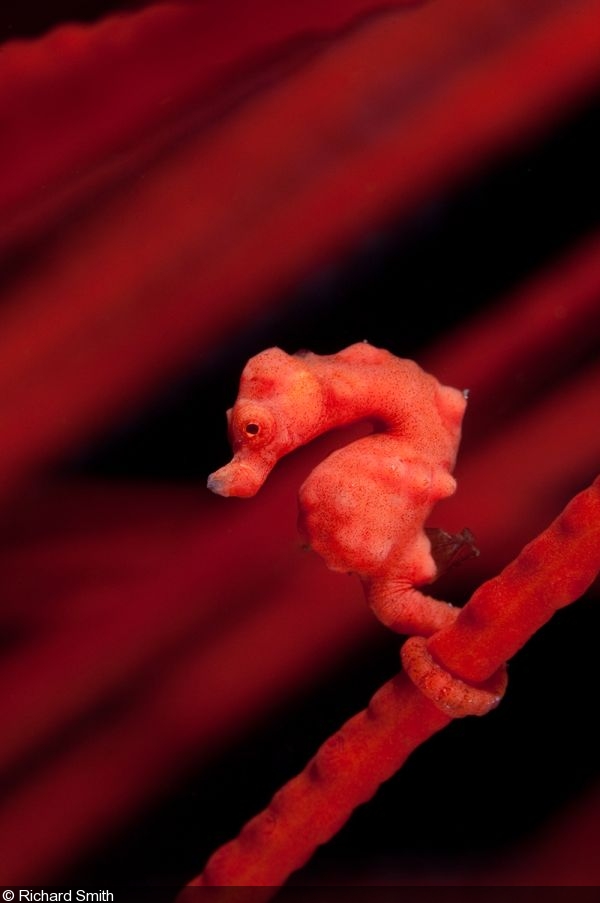 Bargibant’s (Hippocampus bargibanti) – The first pygmy to be discovered lives exclusively on the surface of one very specific kind of gorgonian coral. They have the largest geographic range of a pygmy seahorse, being found in several countries outside southeast Asia, for example Japan, Australia and New Caledonia. 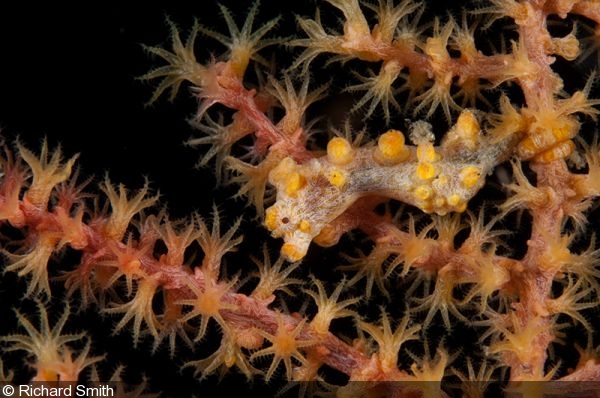 Coleman’s (Hippocampus colemani) – The only species found exclusively outside the Coral Triangle, off Lord Howe Island of eastern Australia (although there are unconfirmed report of this species from Milne Bay and Taiwan). This is the largest species, reaching a maximum length of just over 2.7 cm.

Denise’s (Hippocampus denise) – A very variable species found in a range of colors and prominence of bumps covering the surface. So far, through my research, I have identified Denise’s pygmy living on at least nine different genera of gorgonian corals. 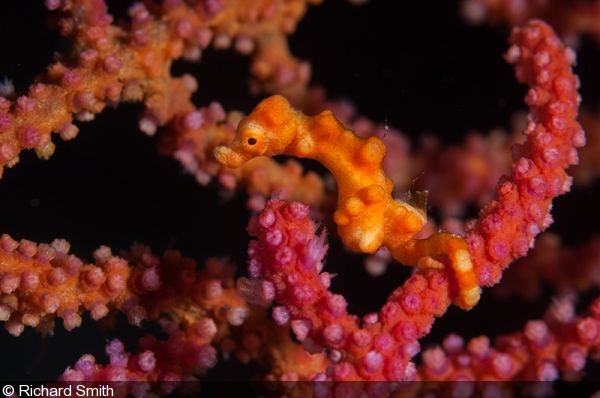 Pontoh’s (Hippocampus pontohi) – This is a free-living species, often found in or near a patch of Halimeda algae. It can be distinguished from the very closely related Severn’s pygmy by its predominantly white coloration. 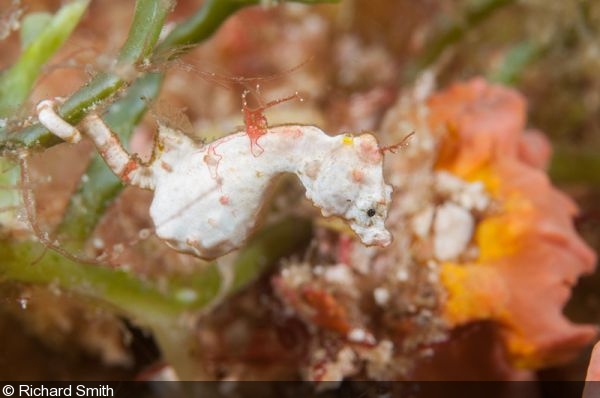 Satomi’s (Hippocampus satomiae) – The smallest pygmy seahorse, reaching less than 1.4 cm in length. It is a very rare fish, found only in a few locations around Indonesia. 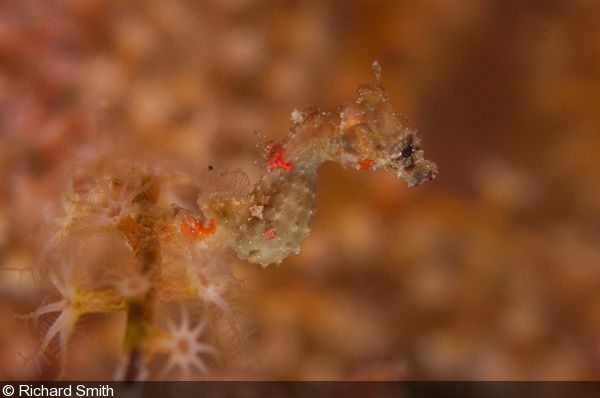 Severn’s (Hippocampus severnsi) – Another free-living species, which is identified by its principally brown body coloration interspersed with patches of red and orange. 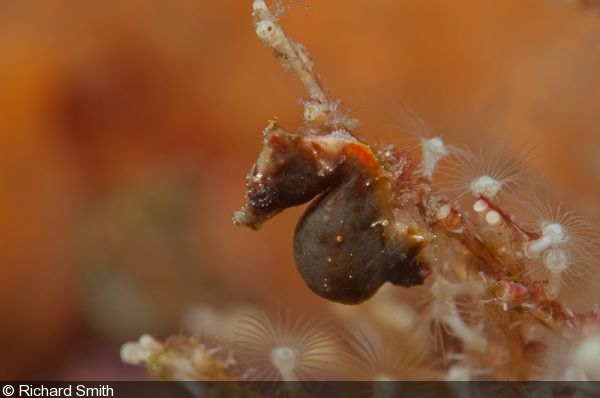 Walea soft coral (Hippocampus waleananus) – The most recently discovered species, being scientifically described in 2009. It is restricted to the Togian islands of Sulawesi, Indonesia where it lives among the branches of shallow soft corals. 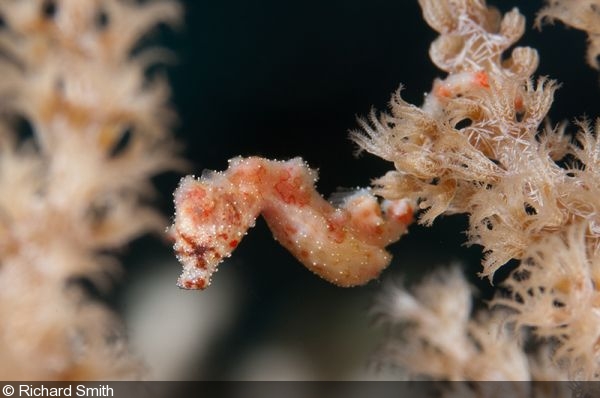 My preferred setup for shooting pygmies with a DSLR is the 105mm macro lens. I sometimes use diopters, but I find that while shooting behavior the depth of field can make life difficult.

Compact cameras can also produce great pygmy images. They may not be able to get the most close up of shots, but pop the camera in macro mode and away you go. Take extra care when using a compact camera, whilst looking at the live view screen, that the camera doesn’t get so close as to come into the contact with the pygmy or its gorgonian home. 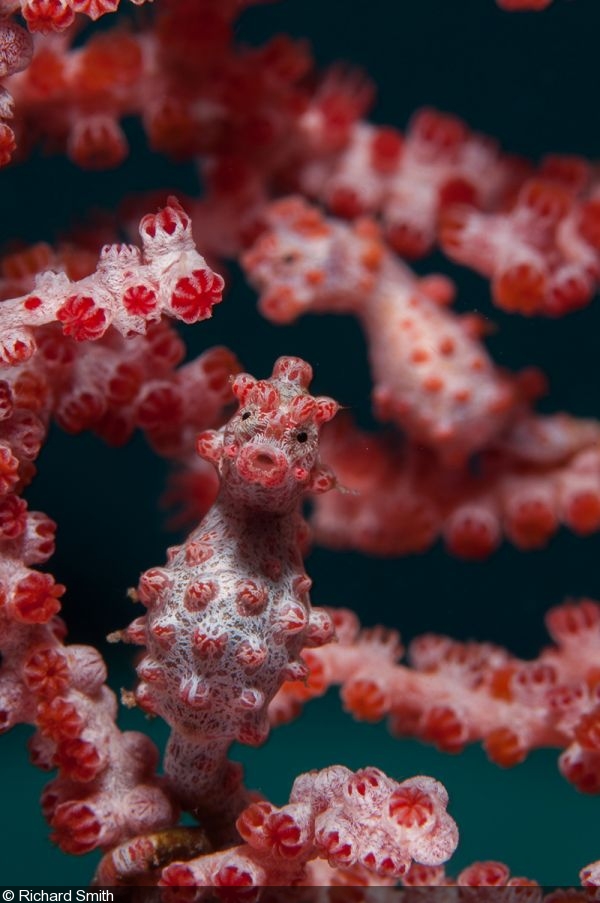 While strobes are very widely used to shoot pygmy seahorses, one piece of equipment I would strongly discourage the use of is a focus light. Pygmies, like many marine creatures, are extremely sensitive to constant bright light sources. This is often the main reason for them constantly turning away from the photographer. You are much more likely to capture natural shots if the animal is feeling calm and unthreatened. 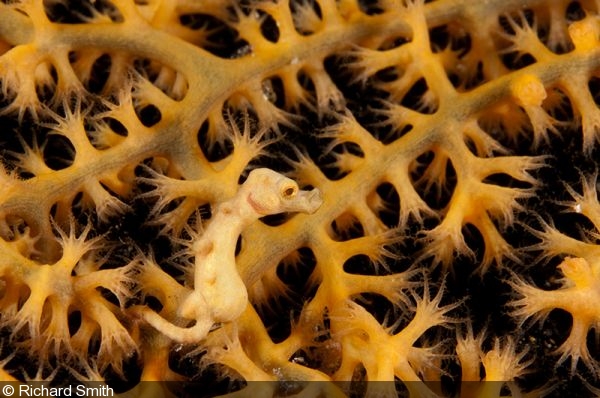 Pygmy seahorses are actually much more active and interesting than people give them credit for. As is the case with many creatures, it is worth spending a little time watching the animal and waiting for it to become comfortable with your presence before starting to shoot. These tiny, eye-lidless fish are very sensitive and dislike bright lights. Based on the results of my PhD research, investigating diver interactions with pygmy seahorses, I suggest limiting the number of flash lit images of pygmies, ideally to five, to keep their disturbance to a minimum.

It is very important when shooting pygmies that you don’t come into contact with their gorgonian home. These corals take decades to grow and are extremely fragile. It is actually possible to see the decline in a gorgonian from regular contact with divers and their equipment. Eventually this renders them uninhabitable by pygmies. To this end, it is best to have your strobe positioning sorted before approaching the gorgonian and have them set back somewhat to prevent accidental contact with the coral. 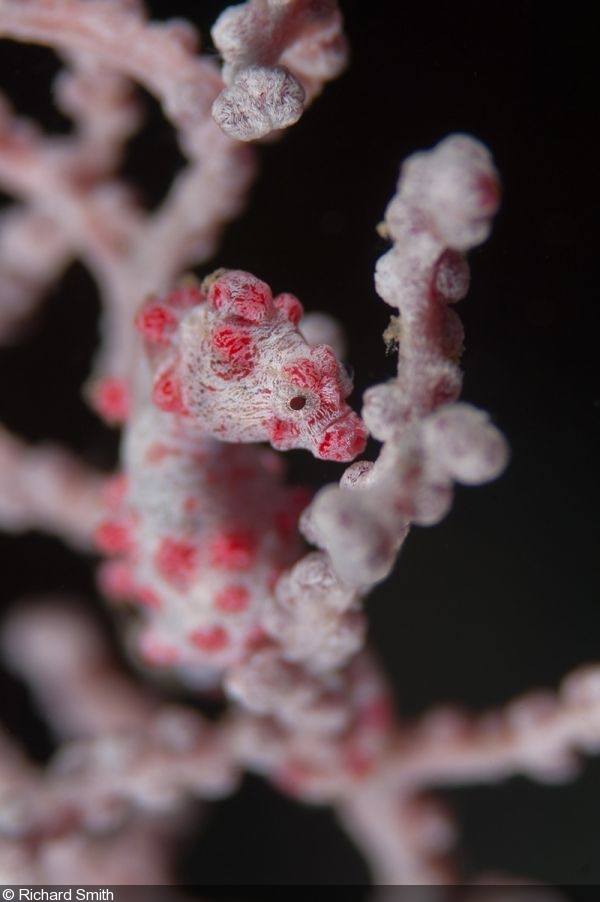 We often attempt to photograph small creatures with as much magnification as possible, but to the non-diver there is no idea of scale in the image. A nice approach with a pygmy, especially with a compact camera, is to shoot the fish’s habitat as well. This puts the animal into context and can make an equally interesting shot as a close up.

When you get more experienced at shooting pygmies, it is possible to stop down the apertures used to give a shallow depth of field using the Japanese ‘Bokeh’ style. I like this method as dialing down the strobe power, which is used to prevent over exposing the image, has the added benefit of keeping pygmy disturbance to a minimum. The resulting shots can be very colorful and give a rather different effect. 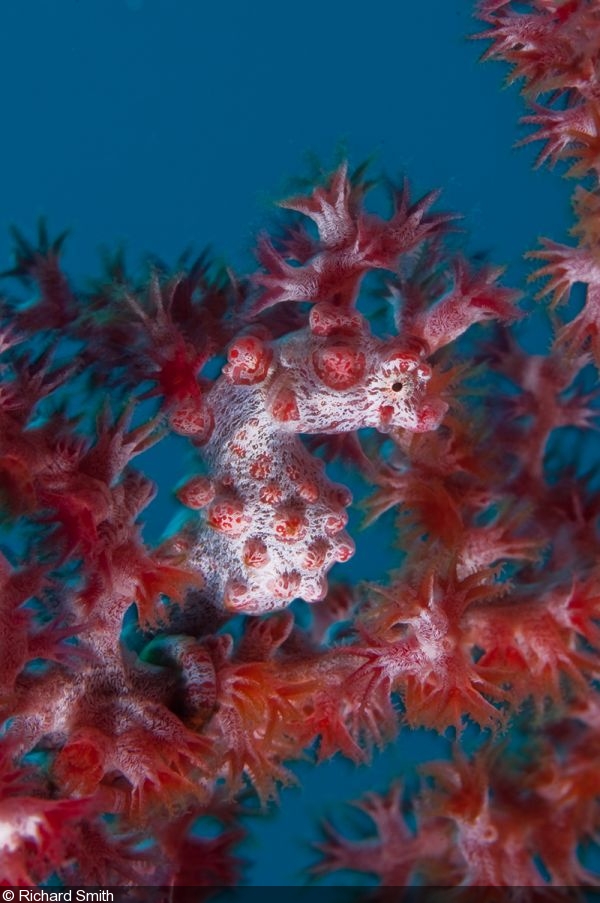 For further magnified images of pygmy seahorses, external dioptres and teleconverters can be used to get increasing magnifications through various stacking combinations. However, it’s worth bearing in mind that the depth of field can become narrower and narrower as the magnification increases.

Pygmy seahorses are extremely charismatic and photogenic, so it’s not surprising they have become such popular subjects. With a little thought and care, capturing great images of these diminutive fish is not only within the realm of the pros but possible with compact cameras too. 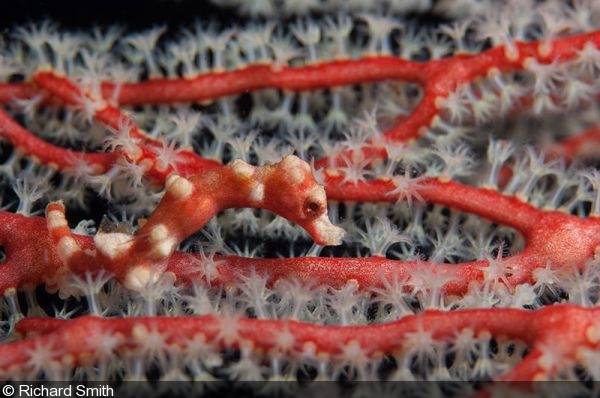 About the Author: Richard Smith is a British marine biologist and photojournalist who aims to inspire a passion for the ocean and raise awareness of marine conservation issues through his images. He has been diving since 1996, which began his fascination with the sea. In 2011, he completed a PhD in the biology and conservation of pygmy seahorses. Richard leads marine life expeditions where the aim is for participants to get more from their diving and photography by learning about the marine environment: www.OceanRealmImages.com.