There are over 700 islands that make up the Bahamas, and traveling from West Palm Beach, we soon find ourselves diving off a small area of one them called “Tiger Beach.”

There are no golf balls, no beautiful greens, or even Tiger Woods. The beach here is really just a shallow sand bar with beautiful clear water, lots of sunshine and lots of sharks! I spent a week diving and photographing sharks that inhabit the Bahamas clear water. 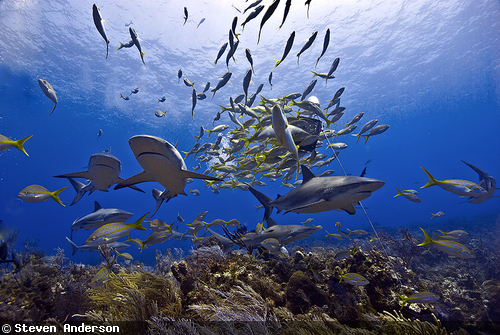 Close, But Not Close Enough

The diving is great. We spend time diving the shallow reefs such as Hammertime, Ginormous, and El Dorado. These are reefs that range in depths of 40 to 60 feet and are all part of the area known as “Tiger Beach.” We spend a few days diving at Crystal Tiger, also part of Tiger Beach where we encounter lots of Lemon Sharks and a couple of big Tiger Sharks.

The world famous Emma, the largest Tiger Shark, even makes an appearance and spends most of one morning with us, and at one point, she is joined by a couple of young female Tiger Sharks. In my years of diving, I have taken lots of close-up images of sharks but I did have one shot in mind that I have never been able to get -- an extreme close up the jaws of a Tiger.  Would it happen on this trip?

We spend the morning diving at Ginormous Reef with the presence of three Tiger Sharks and many Reef Sharks. The Reef Sharks, unperturbed by our presence, always provide excitement and activity on the reef. This is our last day of diving and the shutters and strobes on our cameras are getting a good workout. Amidst the strobes, the sun penetrates the crystal clear water, providing perfect lighting for this dive. Eventually everyone will return to the boat and we pull the anchor and depart for a shallow reef called Shark Paradise.

The dive at Shark Paradise is to be our last dive of the trip. I have captured close to 3,000 images but I am still missing one. I tell our captain, the legendary Jim Abernathy,  about the missing image and he quickly says, “We will get it.”  As we descend down the reef, there are several Lemon Sharks resting in the sand on the edge of the reef. The reef is healthy and there are a few sharks swimming around the bait that is secured to the reef.  Lemon Sharks and Reef sharks swim around us and between us, but there are no signs of a Tiger Shark.

Everyone’s focus is down current of the bait crates, as this will be the direction from which a Tiger Shark will appear. Tiger Sharks are cautious and their movements are very calculated and slow.  When they do make an appearance, they seem to investigate the easiest route to our bait crates.  As expected, in time, a large female Tiger Shark, who we recognize from a earlier appearance this week, appears. 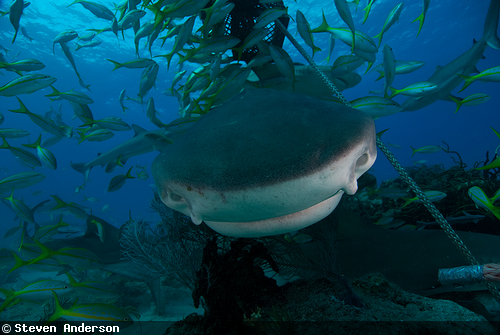 It is like she knows this will be our last dive, so her final curtain call promises to make this our signature dive of the week.  She circles and many times approaches for a closer look at the crates. Jim positions himself next to me and shakes the crates, which causes the oils of the dead fish to dissolve into the water and forms a slick that draws the sharks in closer.

The big Tiger Shark zeroes in and nudges the crates several times. As Jim protects the crates, he gently pushes her away with his hand. The Tiger Shark is never aggressive and continuously plays a little game of keep away.

Most of the other sharks on the reef scatter from the crates, allowing the Tiger Shark a clear path way to the bait. She comes in closer to us, often bumping the dome off my camera, which is like a chew toy to her.  Jim continuously pushes her away, protecting the bait crates. Suddenly she comes in under the crates and Jim pushes her snout up and her mighty jaws open right in front of my lens. I am ready with my camera and my strobes fire right on time. 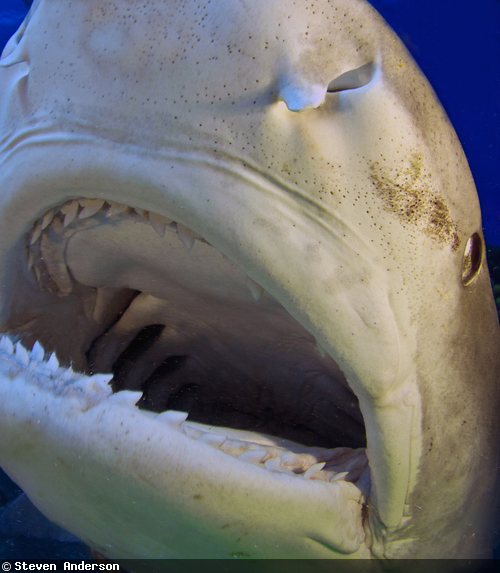 A good rule of thumb when diving and photographing sharks is to never spend more than 3 seconds reviewing a shot; there are always plenty more pictures to take… In this case, I know I have the shot I want, but the Tiger Shark continues to sniff around the crates so I continue to work the shutter on my camera. As the dive ends, and we return to the boat, a mile-wide smile is etched on my face as I climb aboard our vessel. I have the shot I have always wanted and better yet, I’ve taken it!