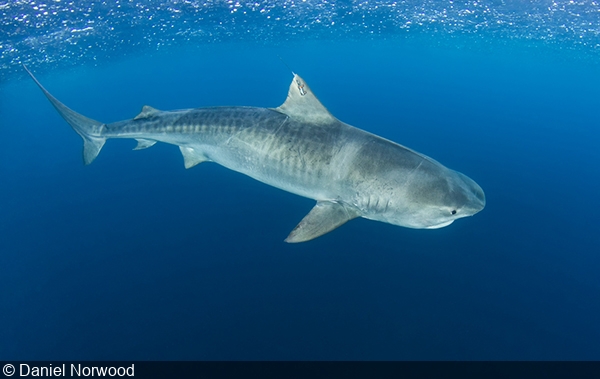 On August 1st this year, I joined a team of researchers from the Dutch Caribbean to document their work tracking and studying sharks in the region. The goal of the trip was to catch sexually mature female tiger sharks and use the latest in ultrasound technology to assess if the animals were pregnant, before attaching satellite tags to further investigate their life cycle. In this way, they can better protect sharks in the Dutch Caribbean’s Yarari Marine Mammal and Shark Sanctuary, and beyond.

The expedition took place on the southwest of Saba Island, on the Saba Bank—the largest national park in the Kingdom of the Netherlands. The trip was organized by Tadzio Bervoets, director of the Dutch Caribbean Nature Alliance (DCNA); included members from Sint Maarten, Bonaire, Aruba, Aruba, and St Eustatius; and was funded by the Netherlands’ arm of the World Wildlife Fund for Nature (WWF-NL). Our home for the week was the Caribbean Explorer II liveaboard, and the work was conducted on Saba Conservation Foundation (SCF)’s two vessels Lady Rebecca and Queen Beatrix. Every day, we would depart the mother ship around 7.30am and spend the entire day dropping sets of baited drum lines designed to catch anything that come in to take the bait. Baited remote underwater cameras (BRUVS) were also deployed regularly to help assess activity underwater, and from the very first drop until the last, the team were successful in catching plenty of sharks.

Over the course of six days at sea, the team recorded a total of 56 animals, including 39 Caribbean reef sharks, one nurse shark, and 16 tigers. Five of the largest tiger sharks were fitted with satellite tags, including one large male and four females, and the ultrasound equipment confirmed that at least one of these big girls was pregnant, making the trip a resounding success. Once the tags start to transmit data, the results should reveal important facts about where the sharks go when they are pregnant, and even where they give birth. This information can then be used to lobby for further protection for the species and their habitats. Having had some special encounters with tiger sharks in other locations, I must admit I sometimes found it tough to watch the animals being fished and tied to the side of the boat, but the tagging team were experienced in keeping the sharks safe and I kept reminding myself that the resulting data would contribute to their conservation in the future. One thing’s for sure, documenting work like this is not like being on assignment on your average scuba diving trip! Any time a large shark was caught on the line, my job was to document the scientific work taking place by getting in the water and taking pictures. I was always accompanied by a safety diver who was told to ignore the activity on the research vessel and instead keep an eye out for other sharks that might appear from below. To get good images, it is important to be able to focus on what you are doing, so it helped a lot to have someone watching my back and I never felt concerned for my safety at any point.

This trip included some groundbreaking research and I wanted to make sure I captured the entire process, including scientists using the ultrasound equipment, measuring the animal, taking blood and tissue samples, and the application of the satellite tags. A shark is caught using baited drum lines and then secured using a tail rope and the hook in its mouth. If at any point the shark looks too stressed or is having issues, it is released immediately. But if all goes well, it is tied to the side of the boat and up to five people get to work simultaneously in order to get the job done quickly and ensure a rapid release. Fitting a satellite tag is undoubtedly the most difficult and time-consuming task, and whenever this took place, I had plenty of time to experiment in the water with different settings and to make sure I shot the activity from every angle. Most of the time I wanted to include the shark below the boat and the team working on the animal above in the image, so it was the perfect time to practice and perfect my split shots. To make sure everything was in focus, I used aperture settings of around f/14–16 and a shutter speed of 1/160s or faster. On day one, I opted to shoot without strobes, but soon realized this was a mistake and that the high aperture and shutter speed meant I needed a small pop of strobe light to properly light the scene. After adding two strobes on long arms to my setup, my results improved dramatically, and although carrying a bigger rig sometimes made things a bit more difficult in the water, it was well worth the extra effort.

I also kept a close eye on my settings and strobe positioning, and made sure to make small adjustments depending on cloud cover, boat position and distance from subject. Some things such as the visibility and sea conditions were beyond my control, but there is no doubt that all my best images were taken in calm seas, when the sky was clear and the sunlight was at my back, so an element of good fortune is also necessary. A close-up of the team installing a satellite tag, shot with a GoPro HERO9 Black

I use a Nikon D500, which can shoot up to 10fps in high speed mode, so I took full advantage of this feature and had the camera set to burst mode when shooting over-unders or any other action shots. At this speed, the strobes struggle to keep up unless used at a very low power setting, but this is all you need anyway and so it wasn’t really an issue. Another downside to shooting at such high frame rates is that I ended up with more than 9,000 images from the trip—1,500 per day—and so the editing process took a little longer than usual. For this reason, I had to be ruthless in my selection process and delete any image that wasn’t tack sharp or well composed. Look closely and you can see that this shark is a decent sized male! Most of the time, I shared the water with Sami Kattan, a videographer from the organization Beneath The Waves, so we did our best to work together to make sure we both got the images we were looking for. Once the scientists finished their work, it was over to us to capture the release of the animal on film and to make sure it swam away without any issue.

From a photography perspective, this is really the only chance I had to get any images of the sharks when they weren’t hooked and tied to the boat, so I made sure to get in position early and kept my fingers crossed the shark would swim in my direction when cut loose. Luckily for me, I guessed correctly more often than not and managed to get a few nice shots of newly tagged tigers in blue water, which rounded out the trip portfolio nicely. When I wasn’t in the water, I spent plenty of time on the tagging boat to capture action shots above the surface, and used a GoPro HERO9 Black and my second Nikon D500 body to take pictures of the entire team at work. I also used a DJI Phantom 4 drone to get some nice aerial images of the island the boats and the crew.

Overall, I was very happy with the images I was able to capture on the trip. It was great to get an assignment so close to home that enabled me to contribute in a small way to the ongoing research and conservation of sharks in the Caribbean. Thanks to DCNA, WWF-NL and the entire team for inviting me to be part of the expedition. I’m really looking forward to seeing the data and where “Kinky” gives birth!