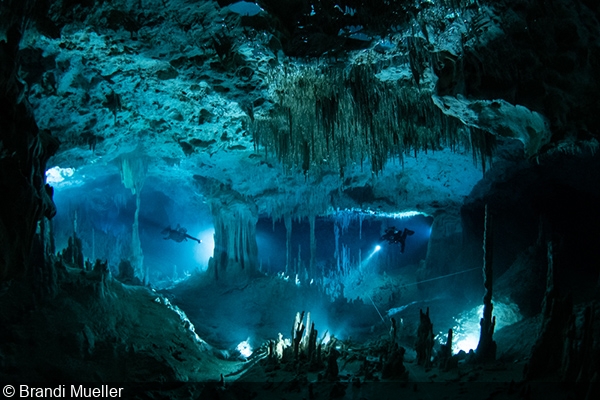 Confession: My first shot in a cavern was pitch black, even though I thought I had compensated for the darkness in my assumed camera settings. My first attempts at shooting in caves were an uncomfortable experience, from shooting distressingly slower shutter speeds and increasing my ISO unpleasantly high, to taking my strobes off the camera—it felt like something important was missing! Plus, that was all after cave diver training, which included being blindfolded in a cave, among other drills, to learn how to dive in one of the most unique environments on Earth.

Having spent some time photographing Mexico’s cenotes, I was hooked and wanted to go further. Returning to Mexico for cave diver training, I was so excited to try and capture these geologic masterpieces formed millions of years ago. But challenging does not even begin to describe shooting in these unforgiving underwater environments. It is dark, really dark. To try and prepare, I started by examining work by other well-known cave photographers and even got lucky enough to dive with a few fantastic photo pros who gave me an inside look at setting up off-camera lighting. This gave me some ideas on how to capture the caves, but like so many things it can be difficult to get good results, even if you know the techniques that others used. Here is some of what I’ve learned. 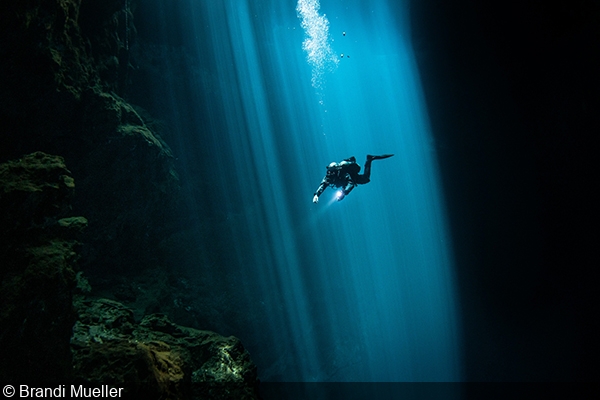 For cave photography, having the ability to shoot at high ISOs is vital. I love my Nikon D850 with all my heart, but at the ISO settings I was using—typically ISO 6400 but sometimes up to ISO 10,000—my images were looking unacceptably grainy and needed noise reduction in Adobe Lightroom to be salvageable. Shooting in caves was the first time I’d considered moving up to a modern high-end mirrorless camera.

A rectilinear lens is probably a better choice than my beloved Nikon 8–15mm fisheye. I love the fisheye effect for wrecks, big animals and close-focus wide angle, but it caused noticeable curves in the stalactites and stalagmites—which are perfectly vertical—and made them look unnatural. This could be fixed in post-processing, but with some loss of quality, so next time I will shoot a rectilinear lens. 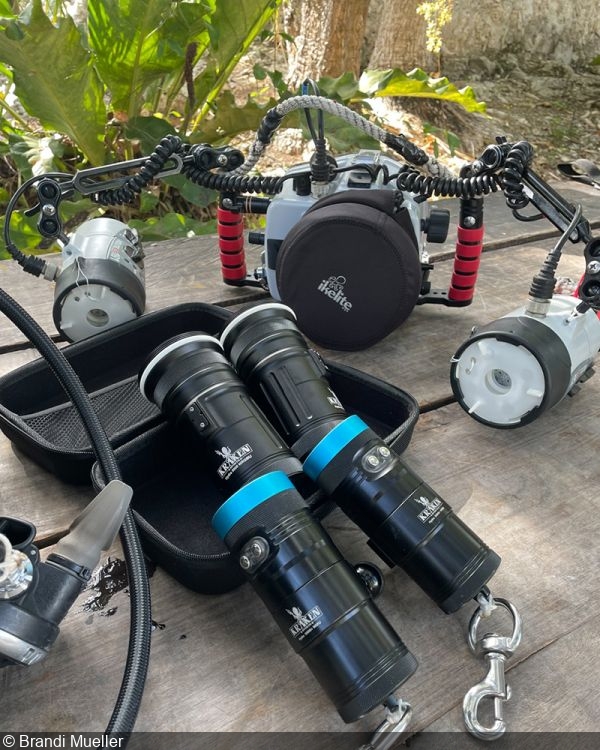 Trying to get myself to remove my strobes felt like I was a toddler and someone was trying to take away my blankie! It also made me realize how much of a habitual shooter (and diver) I have become. It’s tough to try new things. It took several days before it finally dawned on me that I really didn’t need the strobes. They were not giving me good results because the direct light coming from the camera led to overexposed, flat images that weren’t very interesting.

Instead, the key is setting up off-camera video lights (carefully, without damaging or altering the cave in any way), or having divers hold lights with the intention of lighting up certain areas, other divers or themselves. In addition, I found that having an extra handheld video light with a flood beam was useful in the rare instances I wanted to light up something directly. 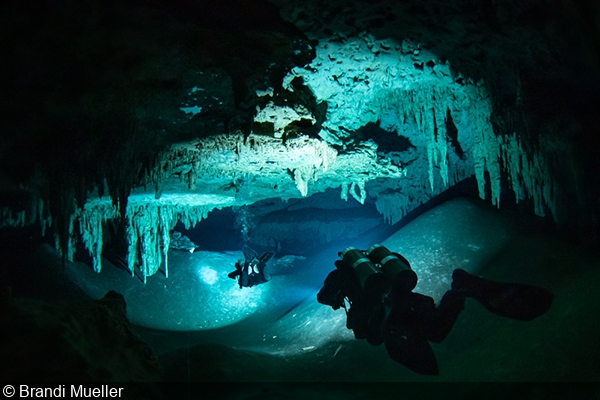 Divers heading into a cave to capture some epic images

Butt Lighting: This is when one diver swims directly behind another, hiding themselves, with a very bright light pointed at their backside. The model blocks out the bright center point of the light and it leads to a white glow behind the diver. Some negative situations that can occur include an overexposed hot spot if the light isn’t blocked just right, the model can appear to have four fins if the diver with the lights isn’t hidden properly, or the model has exhaled bubbles coming from places that just don’t seem right. 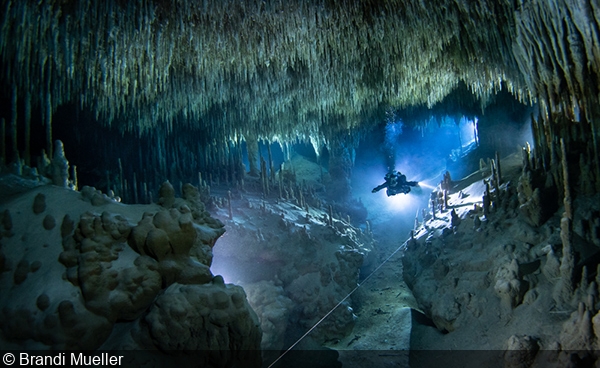 The bright light behind the model draws the eye, creating a focal element in a complex scene

Lighting Divers: In some shots, we placed lights to illuminate a model so that they were not just a black silhouette of a diver. Silhouettes can also be cool, but seeing details of a diver can be interesting, too. I learned that one problem with this is that directing the light incorrectly can lead to shadows of the diver being cast on the cave walls.

Preventing Hot Spots: Sometimes off-camera lights were pointed at the camera, leading to nicely backlit formations with the brightest part of the light blocked. I had to be careful as I moved around to shoot from different places so that the light source continued to be blocked or I would get hot spots in the images. 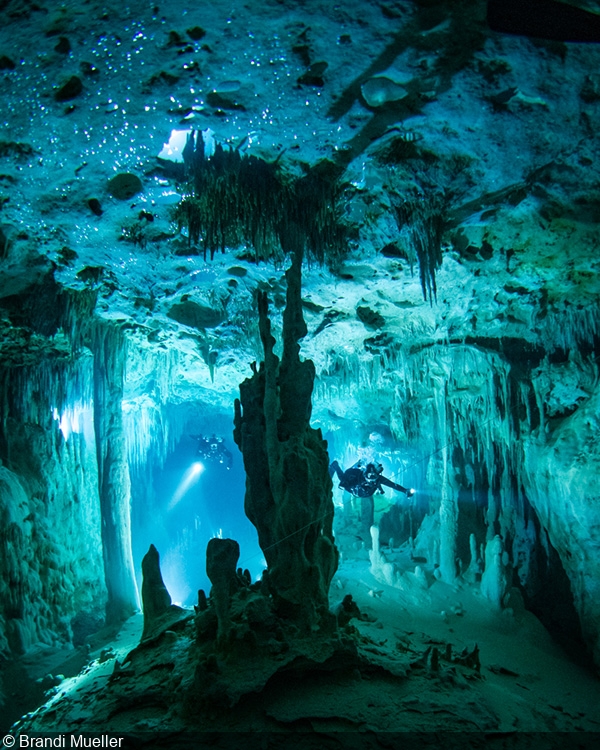 Caves are stunning, but adding divers can give a sense of scale and give the viewer a better feeling of actually being there. Something to think about with your models is body positioning. Having them head-on to the camera can be nice if they are close to show their face, but further away and in silhouette, this position makes them look like a black blob. In such instances, shooting slightly from the side looks better, as you can see the entire body shape.

I also found that it was better if models were not looking directly at the camera. Having them look towards where they were going or at a unique feature in the cave helped show motion or to direct the viewer’s eye to the cool formations in the cave. Getting light to reflect off the mask looked mysterious in some images and blocked any sort of awkward expressions being made by the diver, too. 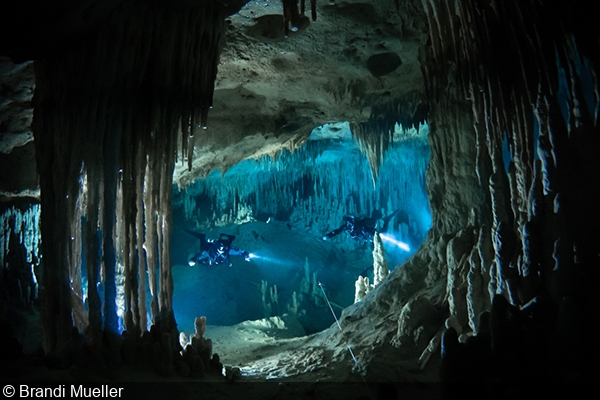 Poor underwater communication during a cave photo shoot is a great way to lose your favorite cave diving buddies. On one dive, I remember thinking to myself, “Why does he look so annoyed right now?” Later, I found out he was being blinded by the bright light I’d positioned on him and I was not lighting my hand signals properly so he wasn’t sure what I wanted him to do—enough to make any diver frustrated.

Preparing for a cave photo shoot starts long before going underwater. Dives need to be done in the cave prior in order to scout out a good location, and on the surface, plans for the dive need to be discussed thoroughly. Pre-dive plans need to include all the normal parts of cave dive preparation and go beyond with photo shoot plans as well. What are we trying to do? In what order will the shots happen? Who is carrying what? Diver positioning? Cave photography is, by far, some of the most structured and pre-planned underwater photography I’ve ever done. 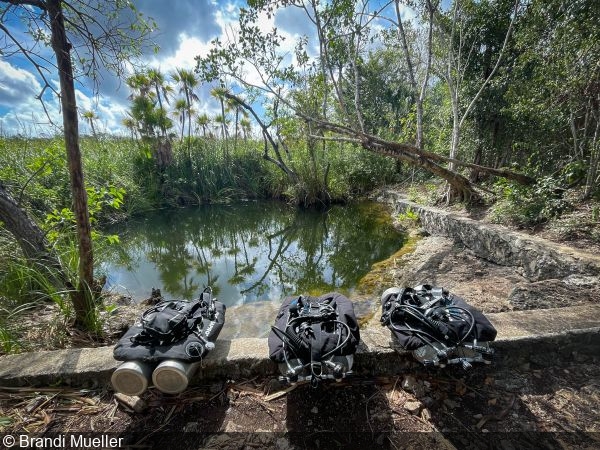 Discussing hand signals prior to the dives was essential, as you have probably never learned the hand signal for “please go butt-light that diver.” Others included signals for changing diver positioning, where to point your primary light, where to look, and so on.

As if it wasn’t hard enough to go into the cave, set up all the lights, properly expose the images, and get everything back out of the cave, I found one of the most difficult parts of cave photography is capturing images that both myself and the model were happy with. As divers progress into tech diving and further into being a good cave diver, buoyancy and trim are everything to them, so any images in which they did not demonstrate perfect trim and posture were instantly rejected. 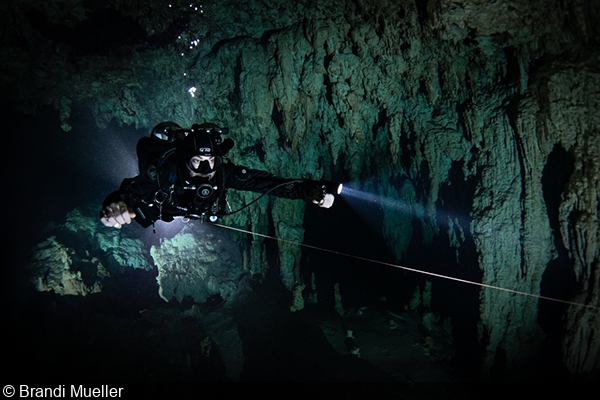 A perfectly lit and well-trimmed cave diver in action

Looking through my photos after the trip, I am happy that I came away with something on my first attempt at cave photography. But there is certainly room for improvement, and I’m very motivated to return to this incredibly unique underground world and refine my skills.

Note that you should never attempt to dive—or shoot—in caves without proper training and experience. Underwater photography must always be done with the safety of the divers and environment coming first, and this is absolutely vital when shooting in caves. Photography is the least important part of cave diving. Having a safety diver during a cave photo shoot is also highly recommended. 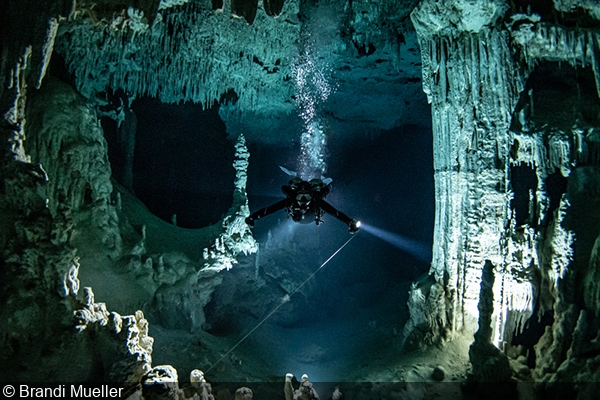