The Sola 600 Focus Light
July 15, 2010 @ 04:07 PM (EST)
By Hergen Spalink
"It's so….small!"  These were the first words that came out of my mouth upon receiving Light & Motion's newest focus light, the Sola 600, for testing.  At just 2.5" in diameter and 4" long and a mere 245 grams, the Sola is impressively small.  The performance, on the other hand, is anything but.
Intended Use:
The Sola 600 is a focus & video light that provides a 75 degrees flood beam of either 679 lumens of 7100 K white light from 6 LEDs or 225 lumens of "critter friendly" red light from 4 LEDs.  The aim of a focus light is to assist the camera's autofocus in low-light or nighttime conditions.  It can also function as a spotting light for night dives, eliminating the need to carry a separate primary torch.  We have tested this light in true "muck" conditions, putting it through its paces for two weeks here in Lembeh Strait.  Here are our findings. 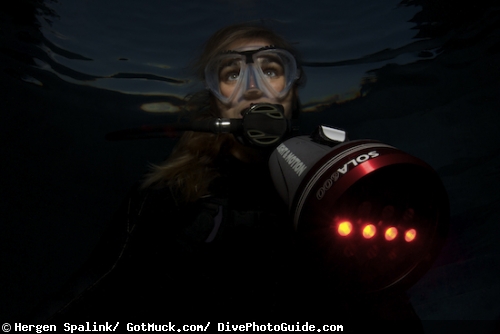 What you get:
Out of the box, the Sola is ready to go.  It comes in a handy zippered cordura pouch that fits both the light and its charger.  The light itself is completely factory sealed and tested so there is no need for the user to open the light, which can cause disastrous floods.

Charging:
Charging is accomplished through a "wet-port" on the back of the light, similar to those used by other manufacturers like Hartenberger and Kowalski.  The beauty of the Sola's charging port is the incorporation of a "guide hole"  on the light and corresponding metal peg on the charger head that prevent accidental reverse polarization.  The charger is extremely compact and supports the full range of 110-220V, a must when traveling abroad. 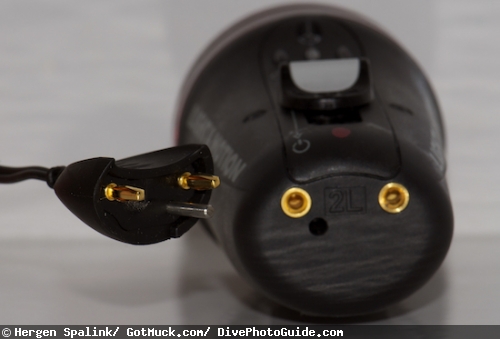 Burn Time & Brightness:
The white LEDs have three power settings versus a single setting for the red.  Advertised burn times range between a reasonable 75 minutes on high power to an impressive 300 minutes on the lowest "white" setting and 200 minutes on the single "red" setting.  The charge level and brightness level are both indicated by the array of three LED indicator lights on top.  The brightness level is indicated by the number of indicator LEDs lit, 1 being low, 3 being high.  The charge level is shown by the color of the indicator LEDs:  green = 100-75%,  yellow = 75-50%, red = 50-25%, blinking = <25% remaining.  So for example, if two indicator LEDs are lit and they are displaying yellow you would be on the medium "white"power or single "red" setting with 75-50% of the battery remaining.

Switches:
Switching the light on and off, as well as adjusting brightness & switching between red & white light,  is accomplished by a single magnetic slider switch atop the light.   The slider is spring loaded and will always return to the neutral middle position.  By sliding the switch towards  the rear of the light the red LEDs are engaged.  Moving the slider forward will activate, or switch to, the white setting.  By repeatedly moving the switch forward the intensity of the white light is varied throughout the three power settings.  Holding the switch either forward or back for 2 seconds will shut off the light.  To prevent accidental activation, turning the slider 90 degrees in the neutral position will lock it in place. 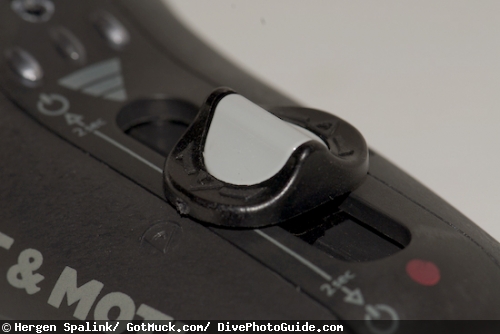 Our Impressions
Setup:
As the light came ready to use from the factory, all we had to do was charge it and put it on the housing.  Charging was a breeze.  The offset charger does require an end space on a surge protector (an issue when traveling to places with limited charging space), but it is still fairly compact and lightweight.  The metal guide peg and complimentary curvature of the charger head and light body prevent accidental reverse polarization.  We mounted the light on our DSLR housing in the hot-shoe position using an ultralight adapter.  The adapter screws into the removable mounting base, which also has a removable lanyard attachment.  This means that there are no dynamic threaded holes on the light itself, which is a nice feature as these tend to be difficult to rinse and the first to corrode.  The light comes with a loc-line adapter but that can easily be changed with an allen-key.

The factory sealed nature of the light has both advantages and drawbacks.  On the one hand you don't need to worry about o-rings and leaking.  On the other hand, you cannot bring an extra battery/batteries for your light on your trip.  The quick charging capabilities of the Sola 600, however, almost negates the need to bring a spare battery.  Charging between dives is a breeze, just blow out the contacts and plug in the charger.  With a run times that will easily last two dives and a swift two hour charge time, throwing it on the charger over lunchtime will easily allow for another few dives worth of battery time for the afternoon.  From complete discharge it took a little over two hours to charge, but the battery is memory-free and can be easily topped off between dives.  During our testing the burn times for the light were pretty accurate to what Light and Motion promised. It's worth mentioning that on the lowest white power setting the light lasted almost 6 hours, which is longer than advertised! 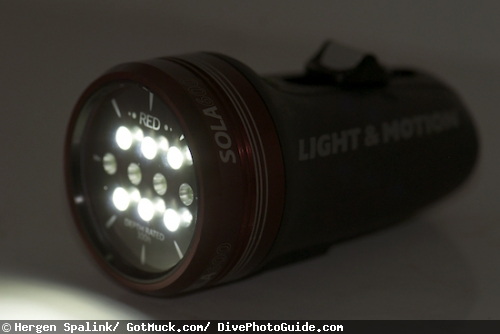 The light itself is extremely low profile and rarely got in the way of the strobe arms while maneuvering them for a shot.  In addition it did not obstruct our 45 degree viewfinder, both common problems with larger focus lights.  The light, although negatively buoyant, did little to affect the overall buoyancy characteristics, at least no more so than any other comparable focus lights we have ever used.  Maneuvering the light underwater is a simple operation.  Due to its small mass, the ultralight butterfly clamp could be kept fairly loose, allowing easy movement of the light while still holding it steady. 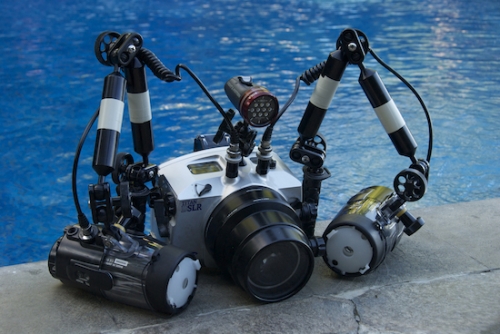 Daytime Use:
The primary daytime use of the light was to assist the autofocus of the camera.  In about 80% of situations we found the red-light to be the most helpful.  Not only is the red beam bright enough to assist with focus, it also seems to be less stressful to the animals.
It's been postulated that fish have adapted to only seeing colors that may be present around them, relying heavily on UV instead of visible light.  Due to the quick attenuation of red light in the ocean, most of it gone in the first few meters.  This means that most fish living below the first few meters probably have a weakened sensitivity to the color red.  This is reflected in the change in behavior of fish when they are lit by red versus white light.  The red light seems less likely to disturb the animal or make it seek shelter.
The white light was used mostly for spotting during the day, with the medium setting being more than enough light, even on a cloudy day or in poor visibility.  Again, the beam pattern and distance of the light were more than satisfactory. The beam pattern is even and wide reaching.  We used both a 60mm and 105mm on an APS-C sensor DSLR and found the range of the beam to be more than satisfactory in all cases.

The red light does not seem to leave any hot-spots, even when shooting at fairly low apertures and shutter speeds.  The beam is uniformly red, there are no chromatic aberrations around the edges as there tends to be with flip down or other external filters.  Variable power settings for the red would be nice, but the fixed power setting seemed to be bright enough to assist with focusing, but no so bright as to disturb the critters. 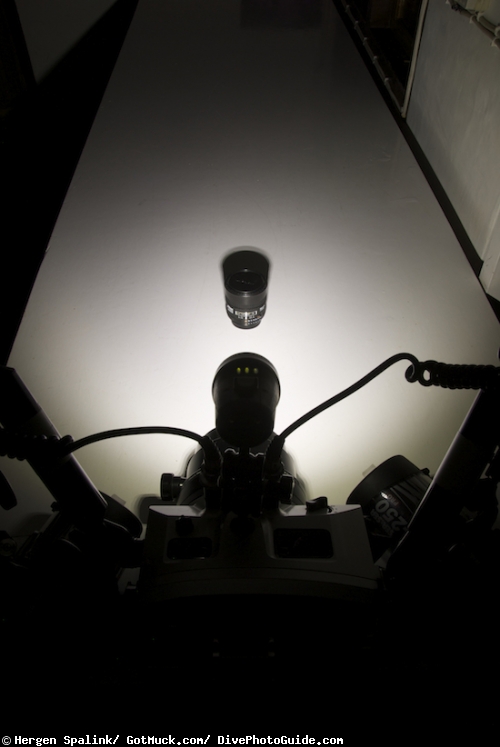 The Sola 600 on the highest power setting 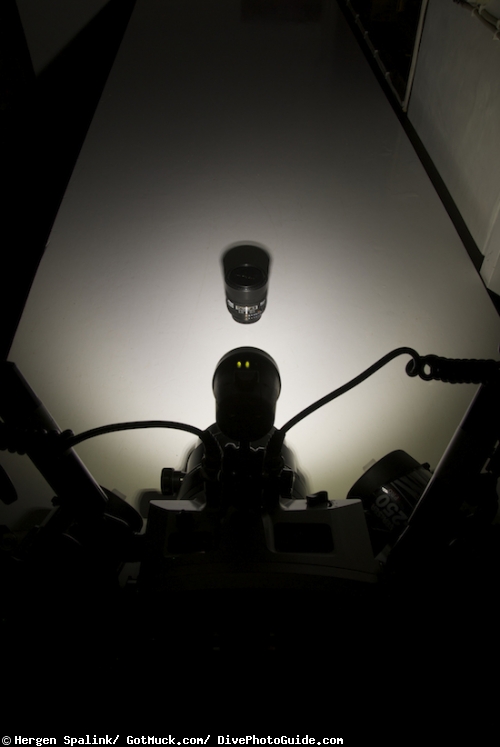 The Sola 600 on the middle power setting 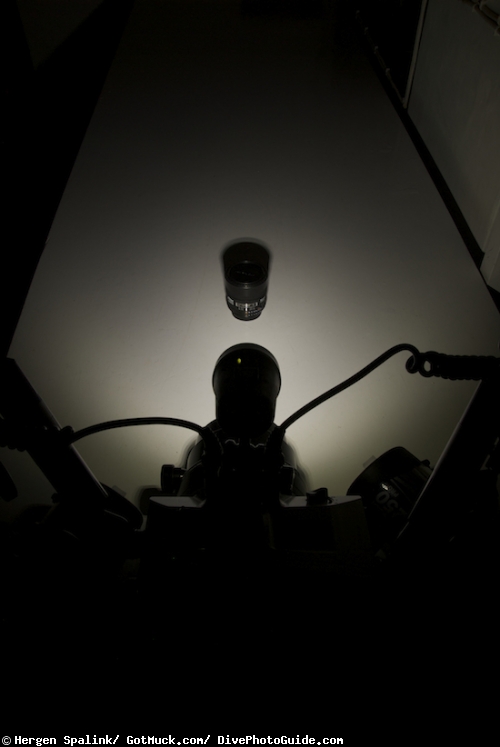 The Sola 600 on the lowest power setting
Nightime Use:
The initial evening we used the light, we went for a mandarin fish dive, as this has commonly been the litmus test for a red focus light.  The light performed as desired.  The beam strength and distance were good enough to allow for focusing on the fish with a 105mm lens, yet not so bright as to discourage them from performing their rituals.  The wide beam provided an excellent tool as well for the initial spotting phase of the dive. 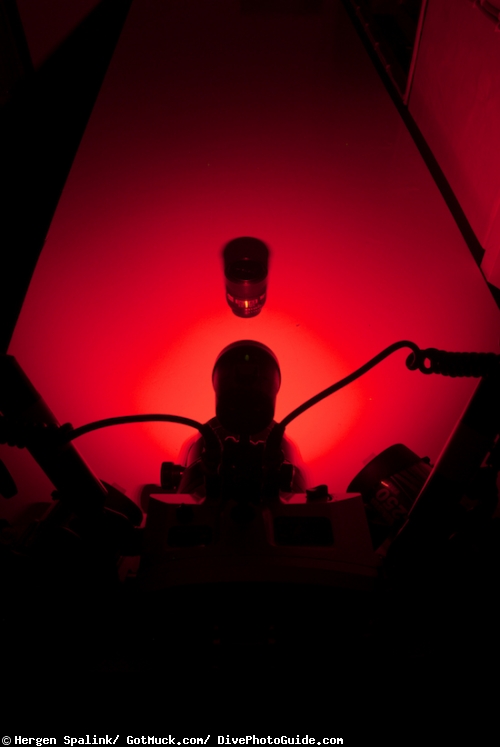 The Sola 600 on the red LED setting
For night diving we used the Sola 600 as our primary spotting light.  At its brightest "white" setting, the Sola 600 rivals many of the compact video lights, putting out an even, broad beam.  The lower two settings were more than enough for critter spotting and navigation.  Upon spotting a subject, a quick flick of the switch and we were plunged into red and ready to shoot.  The switch on the light is easy to use, even in the dark.  The indicator LEDs provide important setting and charge information right on the top of the light.  With only one switch controlling all the functions, there is no fumbling around to find the right knob or dial.  The instant switching between red and white will spoil even the most seasoned shooter.

The lockout function of the switch is accomplished by turning the dial 90 degrees either left or right when it is in the neutral position.  The only drawback to the switch is it is constructed of smooth molded plastic.  On occasion, this causes your finger to slip off the switch once it reaches the limits.  A textured surface would allow for a more controlled movement of the switch.  Another potential issue of the switch mechanism is sand or silt disrupting the slide.  After two weeks of diving in Lembeh, often in extremely silty conditions, the switch never became obstructed. However, special attention was paid to this area when rinsing the light.

Overall the Sola 600 is a pleasure to use.  Offering both red and white LEDs in a compact package eliminates the need for complicated external filters or even using two lights.  Long burn times and short charging cycles ensure the light can keep up with a full dive day.  By keeping everything from the function switch to the sealed battery compartment simple and functional, Light & Motion has made a compact focus light that will appeal to both demanding and recreational macro-enthusiasts alike.

Robin Mcmunn wrote:
Just picked mine up yesterday can't wait till Monday to try it out u/w.

Bonnie Pelnar wrote:
If you plan to use the Loc-Line attachment make sure you attach a line to the light. Brand new, out of the box the screw loosened and my light just fell off underwater. It was lost for a week and fortunately someone found it and returned it to me. I've heard from a dealer that now they are using Loctite, but the first batch of lights that went out did not have it.

Jason Heller wrote:
Hey Bonnie - great tip for everyone thanks!